Now that you’ve learnt some techniques and you’ve learnt some scales, we can start combining those into some licks. In this lesson we will look at 10 easy licks you can start playing today to start building your lead guitar knowledge and skill. You can also check out the Beginners Guide to Lead Guitar as a great starting point for learning the techniques needed for this lesson.

This is the first shape of the minor pentatonic scale. As we are playing this scale in the key of A Minor, the root note (first note) is on the 5th fret of the E string. This is our A note.

The second shape of the scale starts from the 8th fret which is the second note of the scale. The notes used in this scale are the same notes (A, C, D, E, G). Moving these notes to different positions on the fretboard gives us our second shape.

Before you start playing the licks, spend a little time running up and down this scale to familiarise yourself with the flow of it.

Here are 10 fun and simple licks you can play right now and get yourself started on the road to being the next guitar hero. Don’t worry about speed at this stage, these licks aren’t designed to be shredtastic. They are designed to give you a fun and easy way to get into lead guitar playing.

Take your time to play the notes cleanly focus on any techniques that come up along the way. 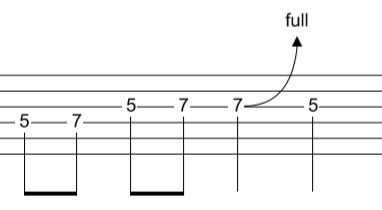 Across the first 2 beats of this lick you’ll be playing 2 notes per beat. On the tab, this ascending phrase is shown as individually picked notes but you can play these with hammer ons if you are struggling to pick them cleanly. The string bend falls on the third beat and the final note lands on the fourth beat.

This lick is a repeated pull off lick on the 5th and 8th frets of the B and E strings. Starting on the E string you perform a pull off from the 8 to the 5 on the first beat. We are playing these as eighth notes so once again we have two notes falling on each beat.

This lick works as a great finger speed builder. Start slow and work your way up getting faster and faster while keeping the timing steady and even.

This lick is focused on the D and G strings and starts with a slide into the 7th fret of the D. I would recommend starting the slide with your third finger. This frees up your first finger to play the 5th fret on the G as the next note.

Each two notes fit across one beat. The first beat being the 7 on the D to the 5 on the G. On the second beat you have the 7th fret on the G in place of the 5th. To play this you can use the third finger that is already on the string above to roll down onto the G. 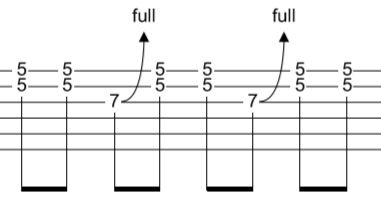 This is a Chuck Berry style rock and roll lick using string bends and double stops. Double stops are a great way to get some attitude into your licks, they involve playing two notes of the scale simultaneously.

In this lick we are playing the 5th fret of the B and E strings together, you can do this with the first finger held flat across both strings. This lick is all straight eighth notes so again you’ll hit two notes per beat. Take your time with the flow of this as throwing in the bend after two double stops actually moves the timing of the next two double stops.

This lick is a great blues style lick to end a run of notes with. It uses the high end of the second shape Minor Pentatonic scale. On the first two beats we have two sets of eighth note hammer ons running up the 8th and 10th frets of the B and E strings.

The lick ends with three consecutive bends. The first two are both played over the third beat and the third bend is played on the fourth beat and sustained a little longer. When working on quick bending phrases be sure to slow the technique right down and focus on the pitching of the note. You want to be sure you are hitting the pitch accurately on each bend.

This lick is a great lick for creating some faster phrases in your lead breaks. Starting with hammer ons across the first and second beat on the 5th and 7th frets of the D and G strings in an ascending pattern. The second half of the lick starts with a slide from the 7th to the 9th fret on the G before ending on the fourth beat with the 8th fret of the B and 9th fret of the G.

This lick is reminiscent of some of the faster flurries you might have heard from Eric Clapton during his time with the band Cream. Clapton was a player who utilized fast hammer on and slide flurries to create impact in guitar solos.

Great licks don’t always have to be flashy and speedy. This lick is more rhythmic in its approach and could even be used as building blocks for a riff or rhythm part for a song.

You can vocalise a lick like this by imagining it rhythmically. Let’s refer to the double stop as high and the hammer on notes as low and we can visualise the rhythm:

Here is another Eric Clapton style flurry. This is a repeated phrase that I have shown here over one bar but a lick such as this can work great repeated over multiple bars of a lead break.

The lick is made up of a hammer on and pull off together on the 8th and 10th frets of the E string. You will hammer on from the 8 to 10 and then pull off again without picking for a second time. This will happen over “1 & 2”.

On the “&” of the second beat you will pick the 10th fret on the B string. Across beats 3 and 4 the same is repeated. 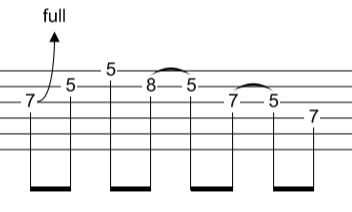 This lick combines ascending and descending runs in a one bar burst, it also uses string bending and pull offs.

The lick is straight eighth notes and will sound great played slow or fast. Start with the bend on the 7th fret of the G before working up over the 5th fret on the B and E strings.

The descending part of the lick starts with a pull off from the 8 to the 5 on the B and then the 7 to the 5 on the G before landing on the 7th fret of the D on the “&” of the fourth beat.

The final lick is a 2 bar monster combining all the techniques and both scale shapes together. This one will stretch you so start out going through it slow and be sure all the movements and all the notes are clear.

The first bar is straight eighth notes starting with a pull off over the first beat from the 10th to 8th frets on the E string. The second beat has the same pull off from 10 to 8 but as you hit the third beat you aren’t picking again, but you are sliding the 8th fret note down to the 5th fret on the B.

The slide will add more energy to the string so you won’t need to pick again to make this note sound.

There is then a series of four pull off runs going down the scale. Each pull off actually starts on the “&” beginning on the third beat in the first bar:

All the licks in this lesson are transposable. They are all written here in the key of A Minor using the first and second shapes of the Minor Pentatonic scale. You can move these to different keys by moving the scale shape and it’s root note relative to whatever key you want to play them in.

For example, move all the licks down 2 frets and the first shape will start on the 3rd fret of the E string meaning the licks are note in G Minor.

Use the timings explained in the lesson as a guide to start but feel free to explore how you can phrase these licks and put your own stamp on them. 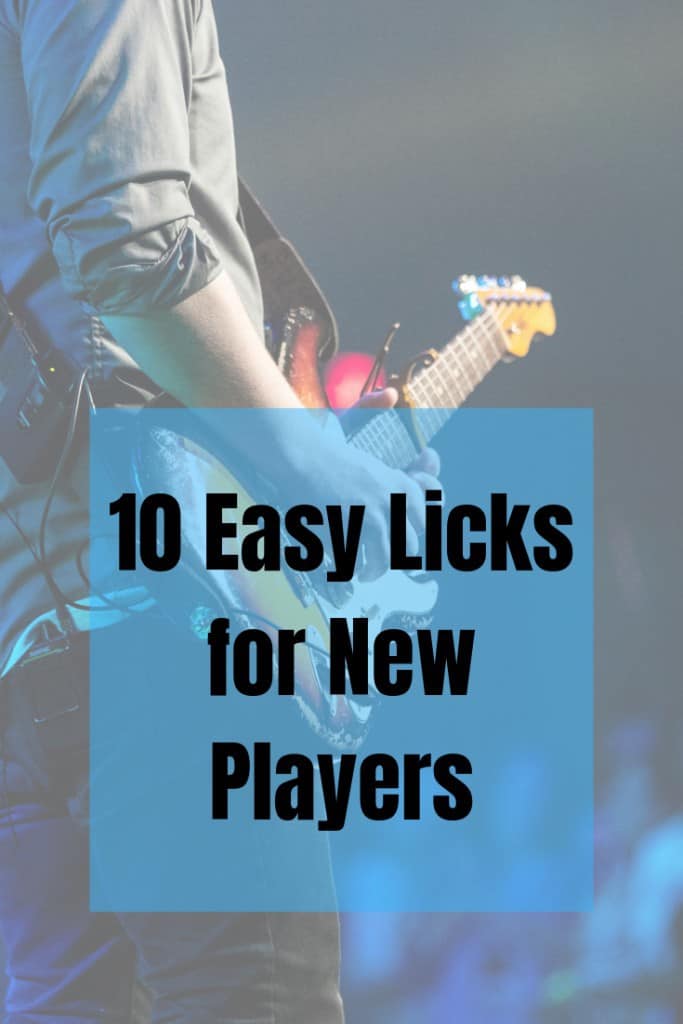