Singing and playing guitar might look easy when you’re watching someone else perform; until you try it yourself. Getting your hands, ears, and voice to coordinate is something that takes practice and skills, but I firmly believe any guitar player can do it if they put their minds to it.

Here are 23 tips on how to sing and play guitar at the same time. 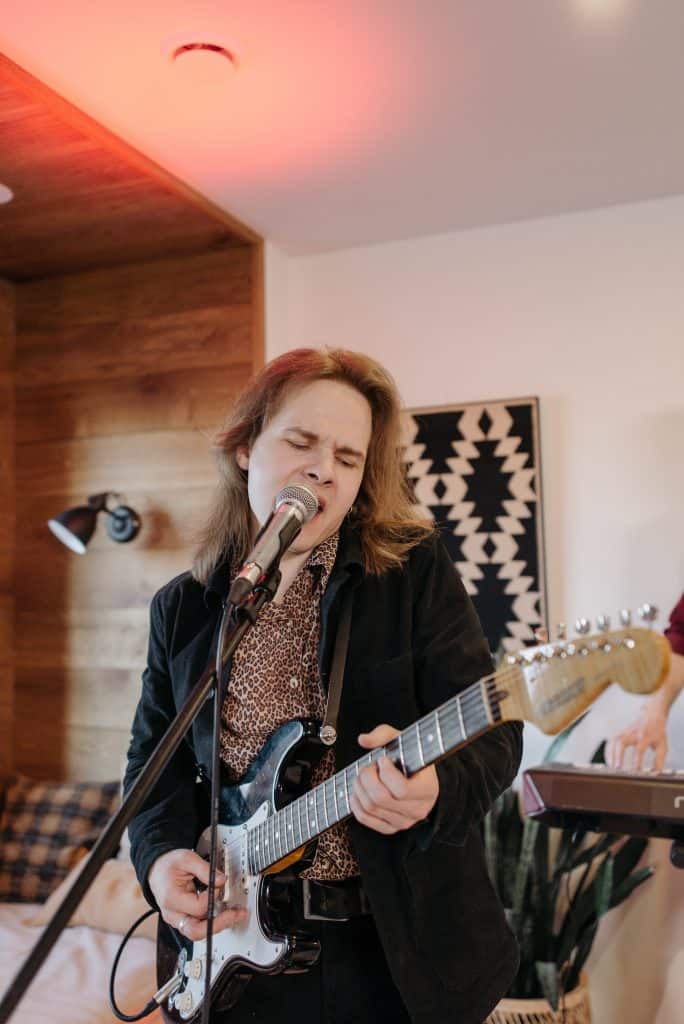 This should go without saying, but you should know how to play the song in question on guitar perfectly before attempting singing and playing. If the strumming pattern is throwing your off or there are some chords you’re still struggling to play correctly, adding vocals to the mix will throw you off even more.

Make Sure You Know The Song Really Well

Likewise, if you want to know how to sing and play guitar at the same time, you need to know the lyrics and melody of the song really well before you start. If you’re unsure of when the bridge comes in, or if a chorus repeats itself, the whole thing will fall apart.

Lots of guitar players struggle to keep in time. If you normally count while you play, singing can disrupt this. So, turn on your metronome to stop yourself from speeding up or slowing down.

Play Along With The Original Track

If the original song is in the same tempo and key you’re playing in, you can play along with it. Unlike a metronome, this method will help you hear if you’re sticking to the song’s structure, and are singing it correctly.

Keep It In Your Range

You’re going to struggle to sing and play if the song is too low or high for you to sing. If it’s too much of a strain to reach the notes, then it’s not in the right key for you. Stick to songs you know are naturally in your range, or change the key; either by transposing or using a capo.

If you have any intention of performing, you need to practice standing and playing. Most musicians who learn how to sing and play guitar at the same time do so to perform live.

When you’re playing guitar sitting down, the guitar is much higher and closer to your body than when you’re standing up. So, the angle your arm and hand are to the fretboard is not the same as when you stand up.

I was surprised when I could play a song perfectly sitting down, but it sounded much sloppier once I tried to stand. So, if you have a performance coming up, don’t let that be the first time you play the song on your feet! 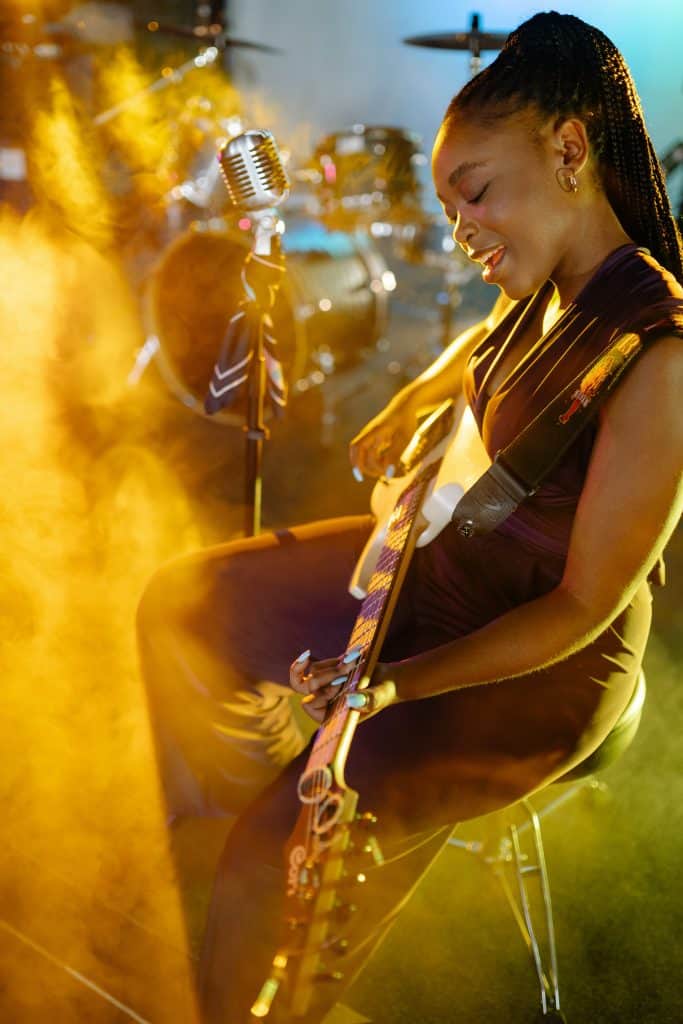 Singing and playing an electric guitar standing up

You might be an excellent guitar player, but singing and playing feels like starting from scratch. Go back to the basics and start off with relatively slow-paced songs made up of open chords.

Once you’ve nailed this, you can gradually move on to more and more complicated songs.

There comes a point where it’s just impossible to sing and play at the same time. You won’t be confined to simple strumming patterns and open chords forever. There are lots of fun riffs I can sing and play along to now, but unless you’re some kind of god, you won’t be able to play a complicated solo while singing.

This is why you’ll notice the lead singer of a band is usually also the rhythm guitarist, not the lead guitarist. So be ambitious, but there’s a limit.

While you’re still trying to get your hands and your mouth to coordinate, don’t be afraid to slow things down. You can speed up when you feel more comfortable.

Before singing, start off by humming the melody as you play the song on the guitar. This will help you grow used to not playing in silence.

Add The Vocal Melody But Not The Words Yet

Once you feel comfortably humming you can start singing, but not the lyrics. Trying to think of the words while strumming and memorizing what chords come next can be a lot to get used to. To start with, you can remove the lyrics and sing non-lexical vocables, which is just a fancy way of phrasing “la la la” “da da da” etc.

Once you feel comfortable, record yourself singing and playing guitar. Then play it back and compare it to the original song. You don’t need to expect perfection, it won’t sound like the original recorded track. Sometimes we miss small mistakes or can’t hear ourselves properly when playing, so this will help you spot errors.

Our voices sound different to ourselves than they do to others, so this can help you spot areas in your singing where you need work.

Sing While Strumming One Chord At A Time

To start with, you don’t need to strum the whole bar while singing. You can sing the song and strum one note per bar to get used to singing and playing.

You’ve probably already heard about the importance of warming up your voice before singing, but warming your hands up is good practice too. When I start playing guitar, I notice it takes a few minutes to feel like my dexterity is at its best. So practice some vocals scales and then some guitar scales to start on the right foot.

You can also try spider-crawls (also known as spider walks) which are a picking exercise to help with dexterity. 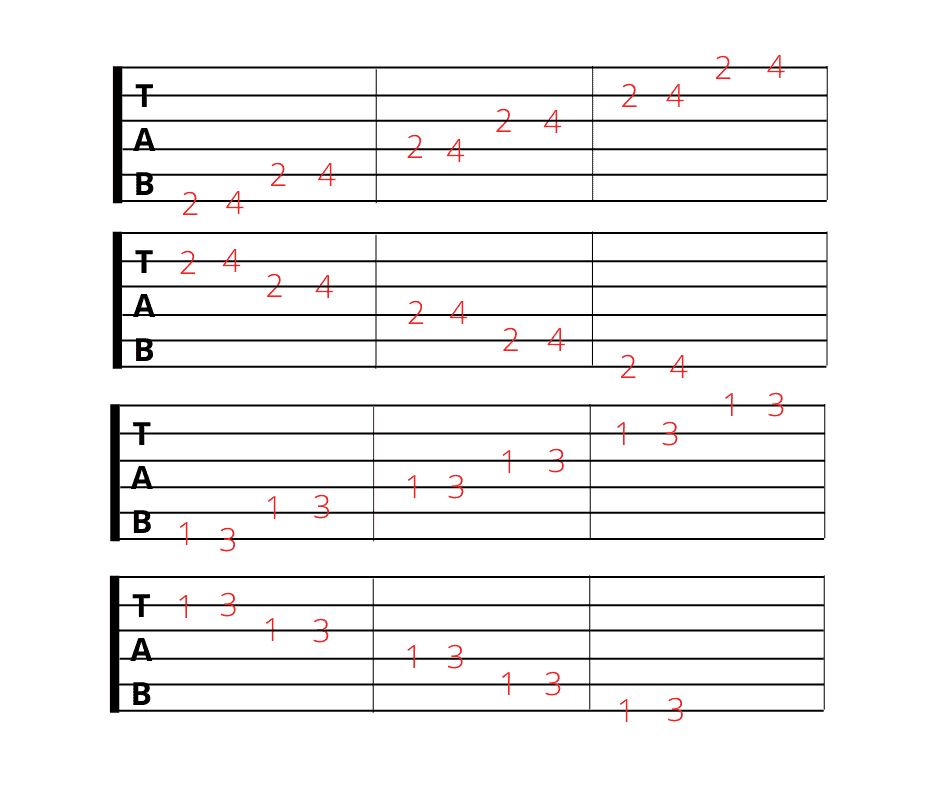 It’s one thing to play a song while looking at a tab, but trying to concentrate on taking in the lyrics and the tab is tricky. Even when the lyrics are on the tab, your eyes are really only going to focus on one or the other.

Besides, if you want to perform live, you can’t stop what you’re doing to turn the sheet over mid-song.

It can be harder to sing along to complicated strumming patterns. So, while you’re getting used to singing and playing make them easier for yourself. For example, if the song is in 4/4 then only strum four downward beats. You can add more when you’re comfortable.

Get Used To Multitasking

Singing and playing is essentially a form of multitasking, so this is a skill you need to work on. Play guitar while having a conversation or even while watching something. You can also try singing while doing some housework

Writing a song might sound complicated, but in this instance, it can make learning how to sing and play guitar at the same time easier. You’re not writing a song that’s intended to be good. Some of your favorite songs might be challenging for a beginner. So by writing a song, I mean writing what is essentially a nursery rhyme and adding simple open chords over it. This is short and sweet and will help you get used to singing and playing.

After all, many guitarists who want to learn how to sing and play guitar at the same time, do so because they want to write songs, so this is hitting two birds with one stone.

Chord changes while playing guitar normally might be effortless for you, but concentrating on strumming, singing, and then changing chords can catch you out. So, to help with this play guitar normally and speak the lyrics over the chord changes.

Not everyone is a natural vocalist, but it is something you can get good at with practice, vocal knowledge, and determination. The biggest off-putting factor for me wasn’t that I couldn’t sing and play – it was that I didn’t like how my voice sounded.

Voice lessons were a huge help, but if you can’t afford them, get yourself a singing straw (which is a tin mental straw, but any small straw will do). This can help with breath control, range, and confidence. Do some vocal exercises when you’re not playing guitar to strengthen your voice.

Nerves can massively impact the quality of a performance, but if you’re learning to sing and play, you’re likely doing it alone in your room. To combat nerves, do whatever it takes to make your practice space comfortable. Maybe this means taking a few deep breaths before playing to ground yourself. It could also mean closing your door and windows so no one can hear you.

When you start singing and playing, it’s not going to sound great. It’s just something you need to keep working on. Over time, you’ll start to hear some improvement.

These 23 tips will help you master learning how to sing and play guitar at the same time. Remember, this is just something that takes time to learn, but once you do, singing and playing guitar becomes second nature. 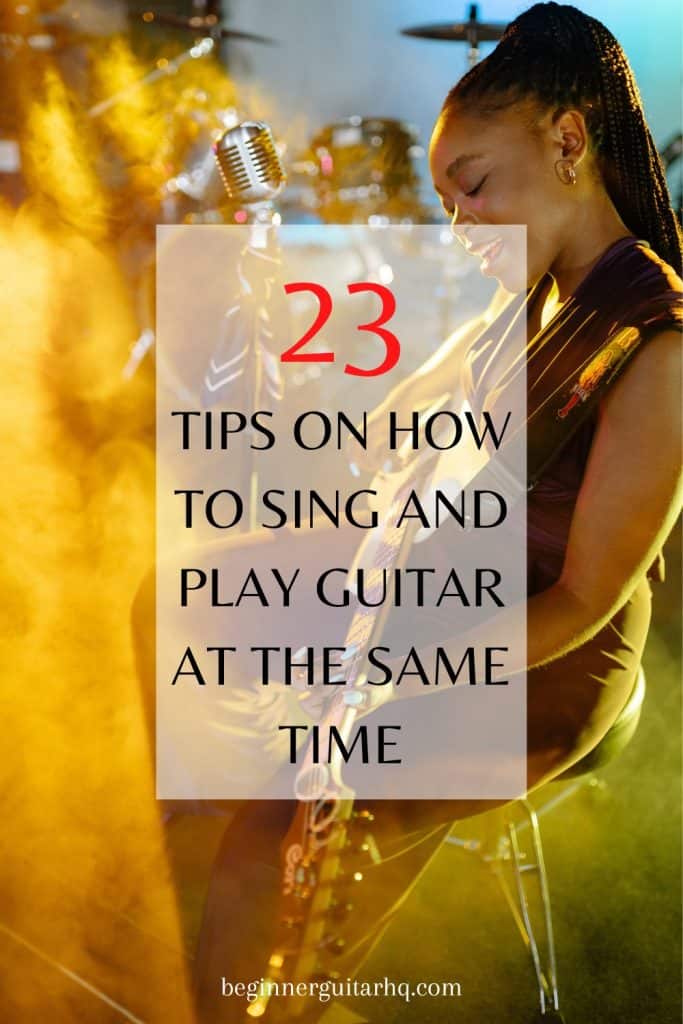