The circle of fifths is a common theoretical term in music. It has many uses across all instruments and  genres but in this lesson we are going to look at a few simple ways that you can learn this essential piece of knowledge and apply it to your playing right away.

What is the Circle of Fifths

Firstly, let’s look at what the circle of fifths is. It’s a theory principle that begins with a C note in the key of C Major. The reason for this is that the key of C Major has absolute no sharps or flats. The circle is arranged with all the other keys ascending in fifths from C, moving clockwise before ending back at C.

A fifth is an interval taken from the major scale. Intervals are the numbers given to each chord and note of a scale. So in the key of C, the major scale would be:

Each note of the C Major scale is given a number that ascends through the scale. In the case of the circle of fifths, what we are interested in here is the fifth note, the G.

G is a perfect fifth above a C and therefore becomes our next key to learn.

Once we go up to the key of G Major, we can apply the formula for working out a major scale and work out the notes that sit in this key:

You’ll notice that our F# is now the only sharp note in this key. If we go up a fifth from the key of G Major, we get to the key of D Major. As G Major had one sharp, we’d expect D Major to have 2:

As we continue working clockwise around the circle, each new key we enter (a fifth above the previous) will contain one more sharp than the prior key.

Here is a list of all the keys with their sharps and flats if we worked from C around:

If we read the circle of fifths backwards, we can find out how many flats are in a key:

You’ll notice in these tables that we’ve used a few note names that don’t actually exist. This is just for illustration purposes to show specific notes in a scale flattening or sharpening.

You’ll see reference to B#/Cb and E#/Fb but as you’ll already know, those specific notes don’t exist. B# is actually a C and Cb is a B. Likewise, E# is an F and Fb is an E.

The inner circle of the circle of fifths is the relative minor of each key. Every major key has a minor key that is it’s relative minor, this means all the notes are the same. This applies to every key and you can figure this out by reading the notes from the VI rather than the I of each scale.

For instance, the relative minor of C Major is the key of A Minor:

This concept can also be reversed, if you start on a minor note, the relative major key is always the III interval on the minor scale. 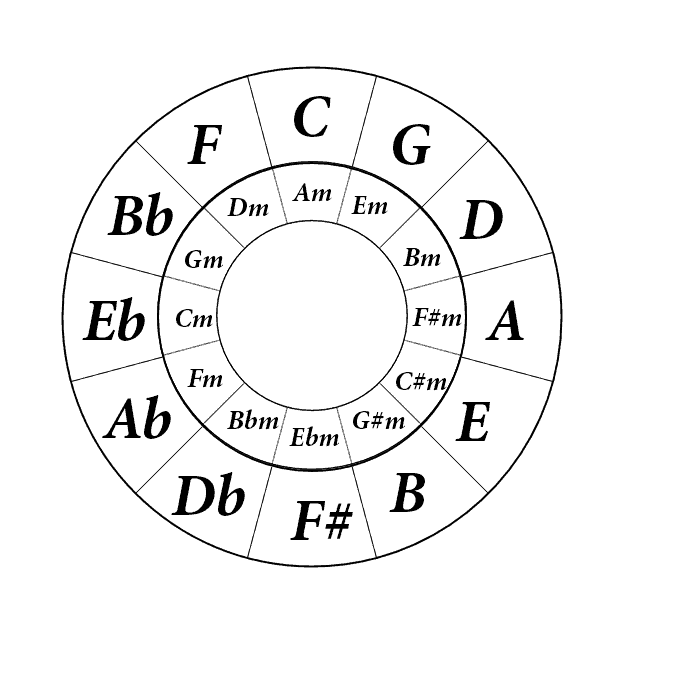 The circle of fifths is usually read clockwise from the C back to the F as you move through the notes in ascending fifths. The inner circle is your relative minor for each of the major keys on the outer circle.

Uses for The Circle of Fifths

Two fantastic ways to use the circle of fifths are as compositional tools. It can be a great addition to any songwriters trick bag. Let’s look at these tricks.

Perfect Cadence to End a Progression

The major scale plays a big part not only in us understanding music theory but it also plays a big part in what our ears expect to hear, especially in Western music. Most pop, rock and mainstream music is written in a way that our sense of expectation is rewarded.

One way to reward this sense is with a perfect cadence, otherwise known as a V – I (Five – one). This is a way to end a progression. A good way to visualise this is with a short chord progression in the key of C Major. We are using the chords C, F and G (Or, as intervals the I, IV and V).

Try ending this with another chord from the key of C Major instead of a C. This is known as an imperfect cadence. While any chord from the key will still sound correct, you will want to hear it end on a C to resolve that progression.

Much like creating a perfect cadence can be used to end a progression, is can also be used to create an effective key change. Let’s start with a four bar chord progression from the key of C Major:

The typical place we’d expect to see a key change would be a repeated chorus at the end of a song where the songwriter wants to give it a lift to a new key. So let’s imagine this is our chorus chord progression.

If we’ve played that 4 times and we now want to shift it to a new key, we could in theory just take the chord progression as a series of intervals:

And simply place that into a new key and take the chords from it. Or, we can use the circle of fifths to create a key change with a perfect cadence at the start. This will give our key change a nice, pleasing lift.

This means, we are shifting the key from C Major to D Major by applying a perfect fifth from the final chord to the fifth in that chords own major key. This cadence will make your key changes really sing.

Now go and try these tricks in your songwriting today and get to know the Circle of Fifths. See if it enhances your songwriting and allows you to achieve those sleek song endings and key changes. It could be the best theory concept you ever learn. 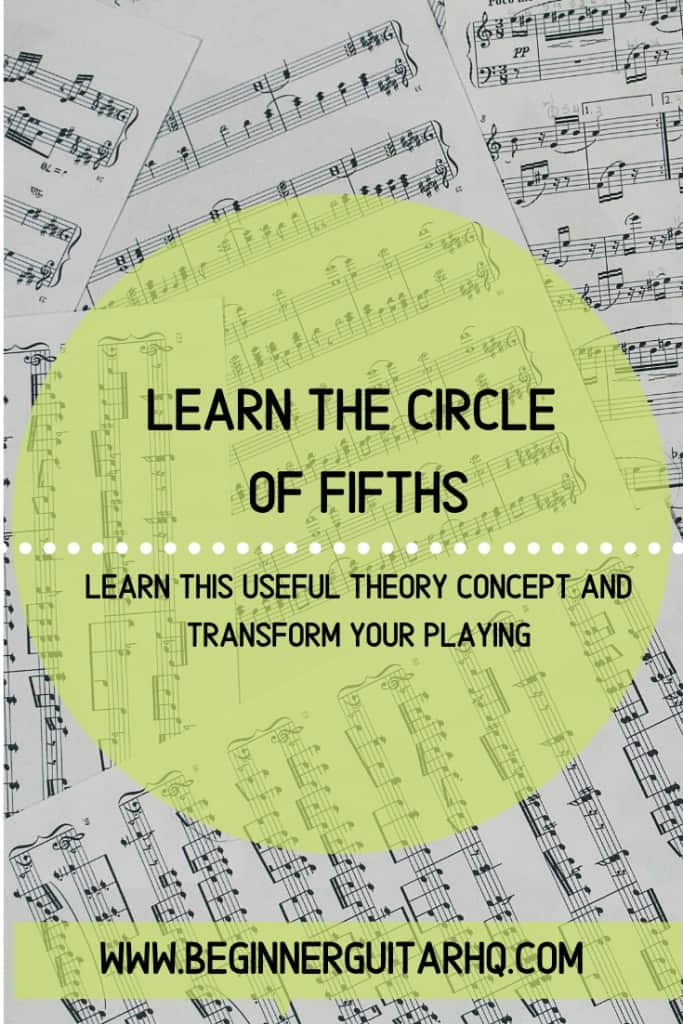