There are a lot of chords you’ll come across while learning guitar, but few of them will crop as much as a simple E chord. We’ve done a lot of guides to how to approach playing chords through various techniques, and many different variations on these basic shapes.

In this important guide, I’ll be taking you through a huge number of variants of the E chord:

If you’re looking for a place to start with E chords, then look no further…

Each of these notes (degrees of the scale) can be assigned a number as it ascends so you can use a helpful formula to work out chords from it. The E is a 1, the F# is a 2 etc.

Once you’re familiar with the scale, you’ll do well to remember that the formula for an E major chord (and any tonic major chord of any key) is 1-3-5 which gives the notes E-G#-B.

Within the key of E major, you can make various chord sequences and work them out using this numbering system, but remember that E major is your tonic, and is where the key will sound resolved and at home.

Songs That Use E Major Chords

Major chords are typically used to express happiness in music, as they have the ‘positive’ interval of a major 3rd. An E major chord is one of the first you’ll learn, as it is part of the ‘open’ tuning of a guitar. One of my favourite ways to use an E major chord is in the key of A minor, as a version of chord V (5). E major can be found in the following songs:

Unless you’re an absolute beginner, you’ve probably come across an E major chord already. It is built around the open 6th string, which in standard tuning is already a low E note. 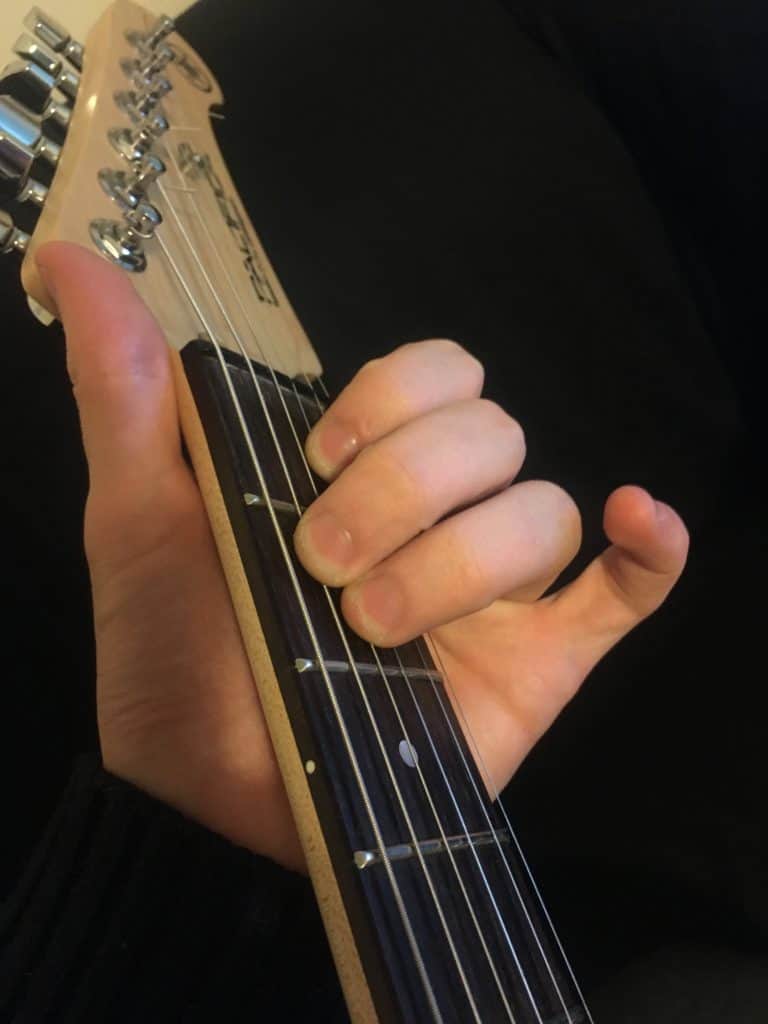 This version of the chord is essentially a slightly extended power chord, but is different as it adds on an extra note in order to bring out the major 3rd of the chord. This means it wouldn’t typically be used in metal music like many power chords would. 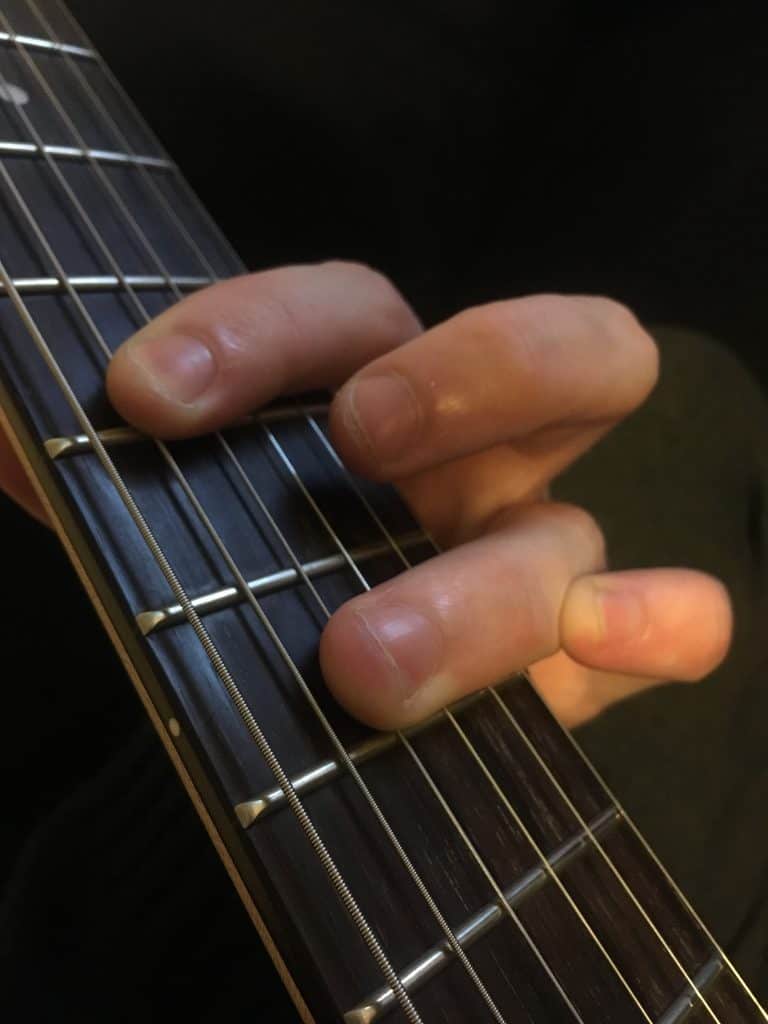 Use your 2nd finger to press down on the 7th fret of the 5th string, then use your 4th finger to barre the 9th fret from string 4-2. Let this same finger mute the 1st string so the E string doesn’t jarringly ring out over the chord.

This one is a bit challenging as it takes quite a big stretch across the neck to reach the higher frets, but it’s a great shape to use when you’re in need of an almost harp-like sound. 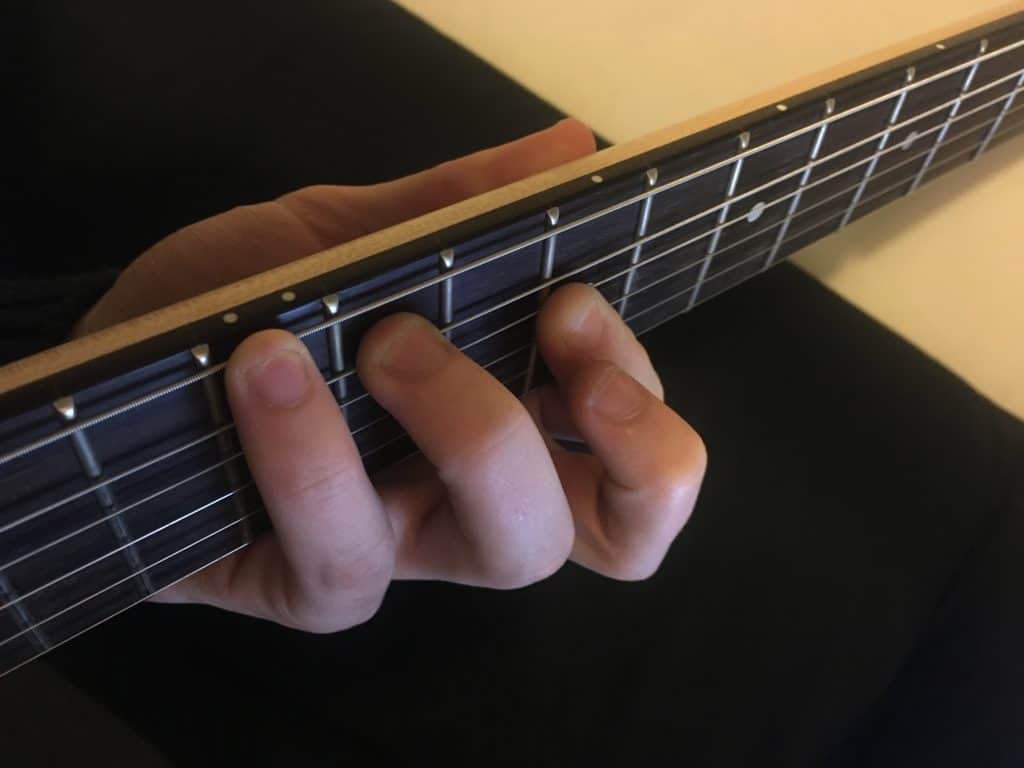 This variation is important, as it is a moveable major shape that can be placed on any fret to form a major chord of your choice. This one only really works on an electric guitar, though, as its too high up the neck for most acoustic guitars. 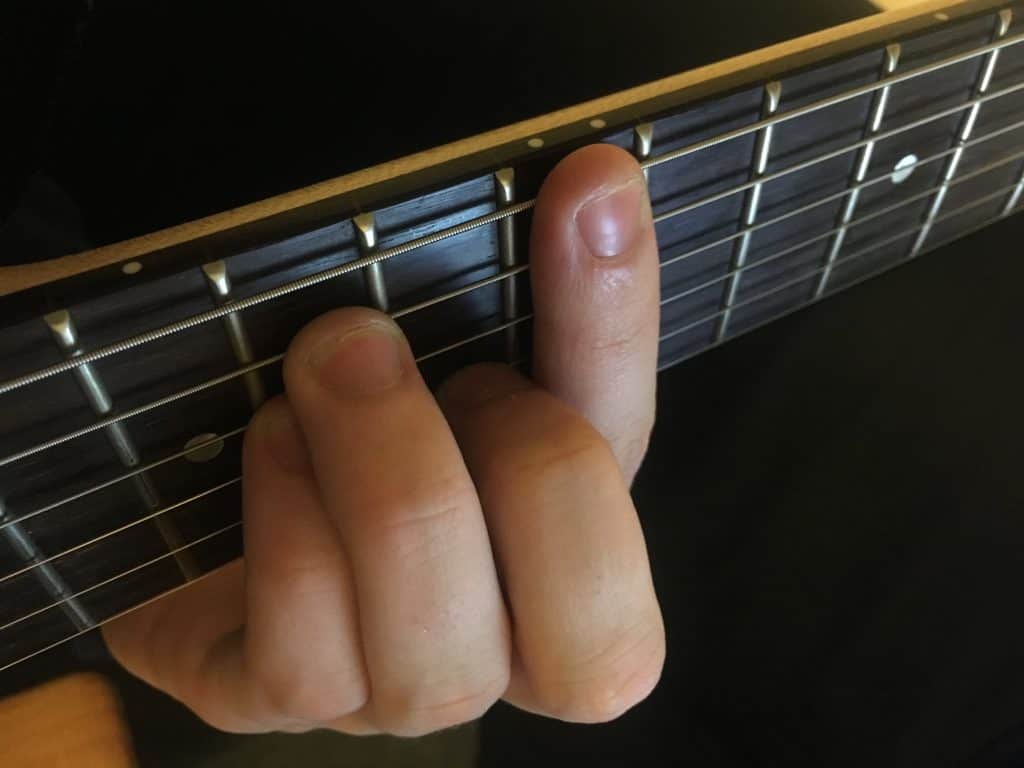 A minor scale differs slightly from a major scale in that degrees 3, 6 and 7 are all flattened, so they are lowered by one semitone. This creates the E natural minor scale (variants such as the harmonic and melodic minor will be looked at in a separate guide).

Songs That Use E Minor

E minor is probably the first chord you ever learnt when playing guitar, and definitely one of the easiest, even in a lot of its variations. It’s easy to mute as it is often based around the open low E string, and, in guitar-based music, is probably the most commonly used chord in the world. These tunes use the Em chord:

The open Em only takes 2 fingers, and will be heard in a huge amount of the chord sequences you’ll learn as a beginner. In acoustic music this one is particularly easy to strum. 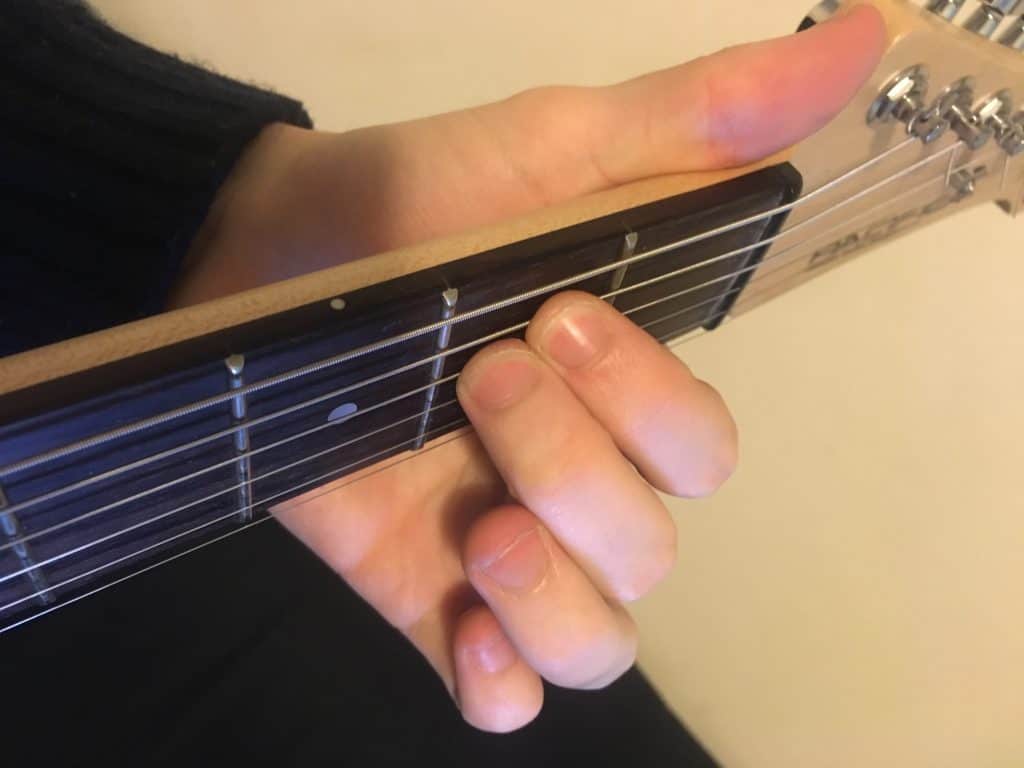 This one is another moveable chord, and can be pushed up and down the 5th string. It’s also a good one for use in heavier styles as it is quite easy to mute thanks to its barre. 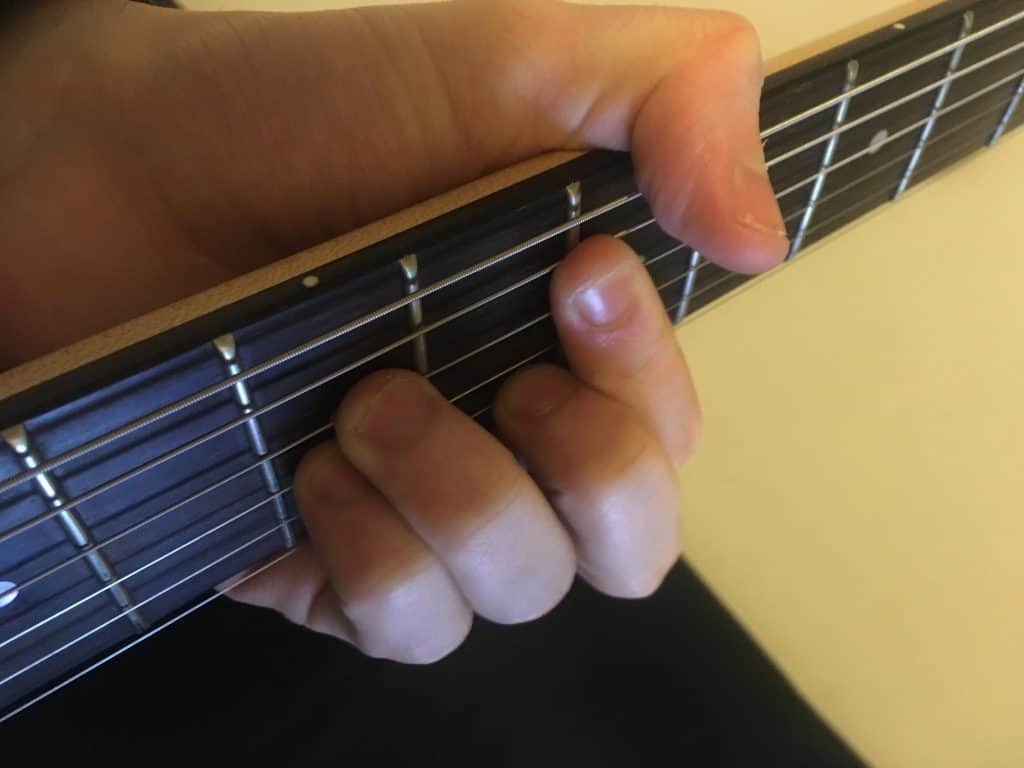 This jazzy variant is one of my favourites, as it can be used both in staccato, bouncy circumstances and it’s easy to pluck, but also in dreamy arpeggiations thanks to its high notes. 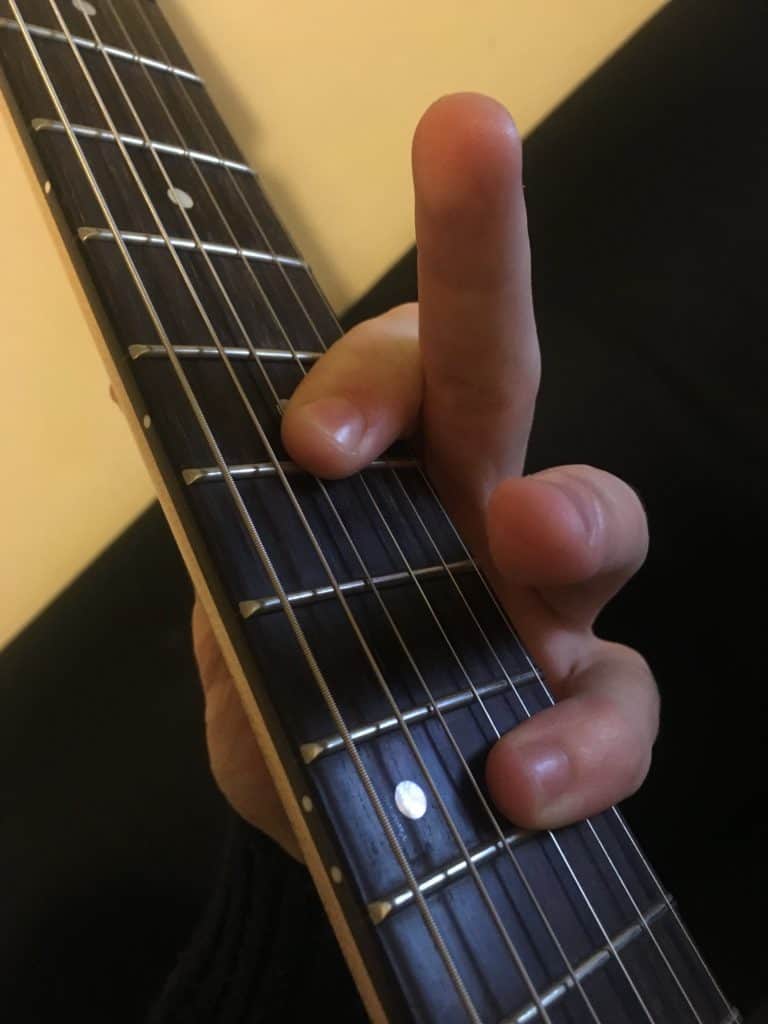 Much like the major barre chord, its E variant has to be played really high up on the neck, so it doesn’t lend itself well to replication on acoustic guitar. Technically, this is the first variation we learnt, taken up an entire octave. 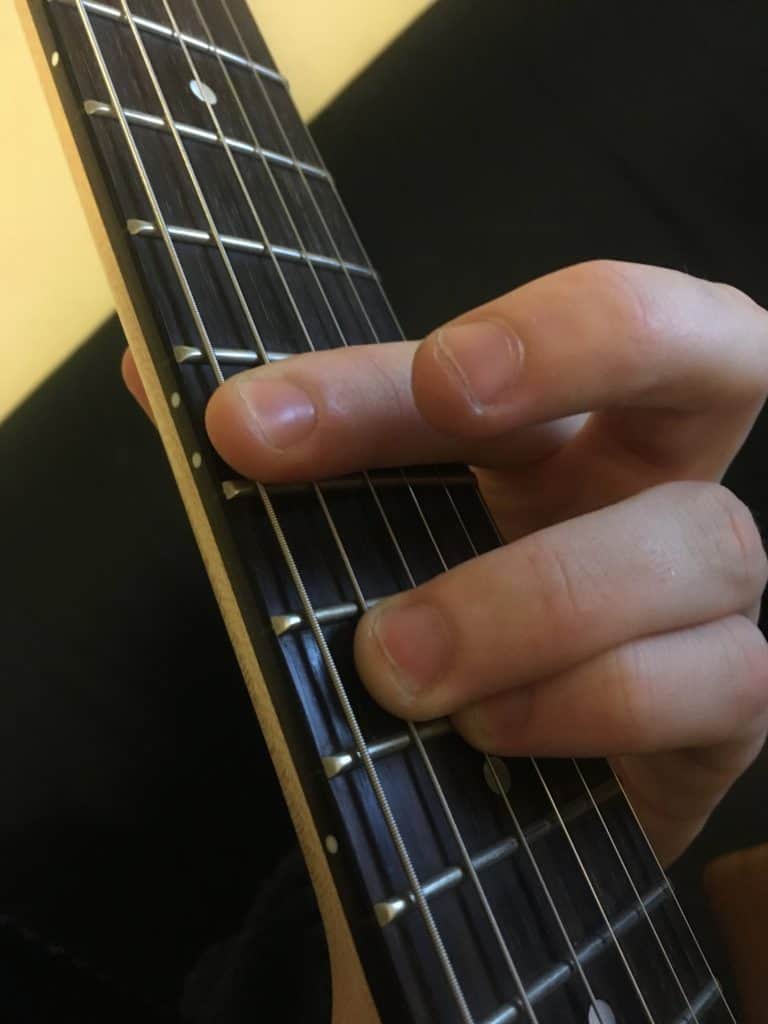 An E7 chord, or E dominant 7, is a major chord with an added minor 7th. This creates an interval of a tritone within the chord, adding a laying of dissonance to the sound. In a lot of music, the E7 is used as part of a perfect cadence, in order to resolve to the tonic. However, one of the primary uses of the dominant 7th in modern music, is as a part of jazzy chord sequences.

If we use major scale theory (which we would unless you’re delving into the realm of modality where this chord has a strong Mixolydian quality) then the formula for this chord is 1-3-5-b7. The b7 takes the D# of an E major scale down to a regular D.

Songs That Use E7

E7 is an interesting one, as it has a very low, open variant as well as a number of higher, jazzy alternatives. Similarly, it is a huge player in jazz music, but can also appear at decisive moments within pop songs thanks to its power in cadences, but jazzy dissonance. Just a few songs that include the chord are:

This open chord uses 2 fingers just like Em, but now they are separated by a string. This chord will rarely work in jazzy/funky settings, due to the risk of open strings ringing out. 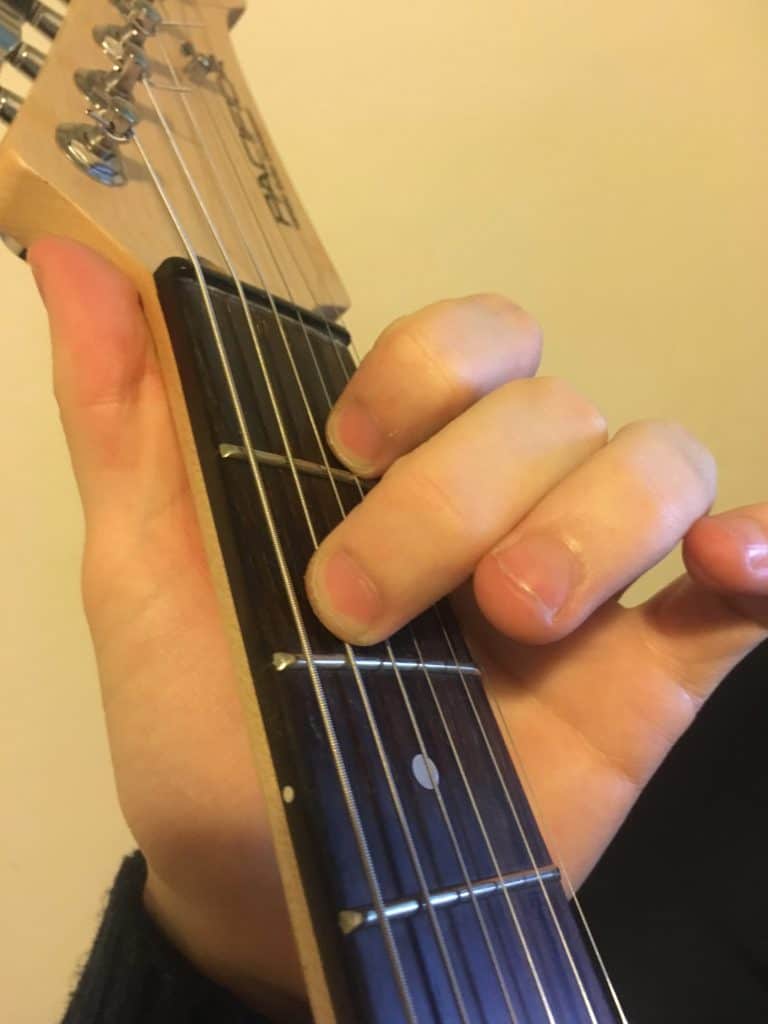 As you’ve probably realised by now, pretty much every chord has a barre chord variation that can be moved up and down the neck accordingly. E7 is no different and is quite an easy one to use within a lot of genres. 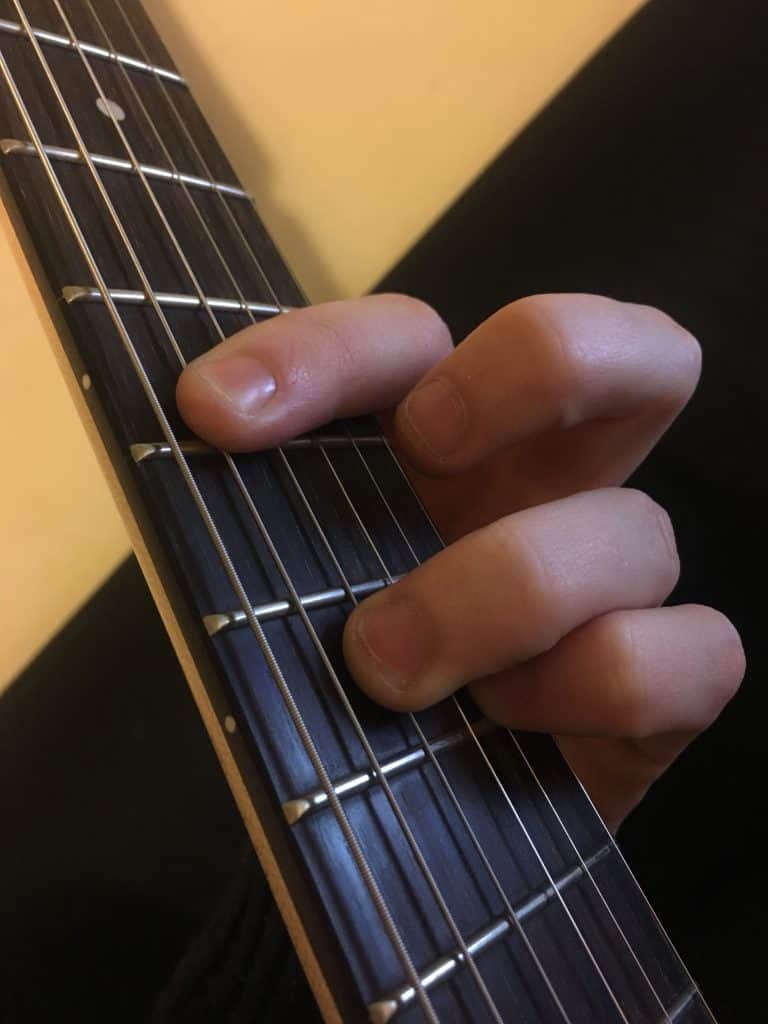 If you’re looking for quite a simple jazz variation, then this 9th fret E7 chord will sort you out in most scenarios. 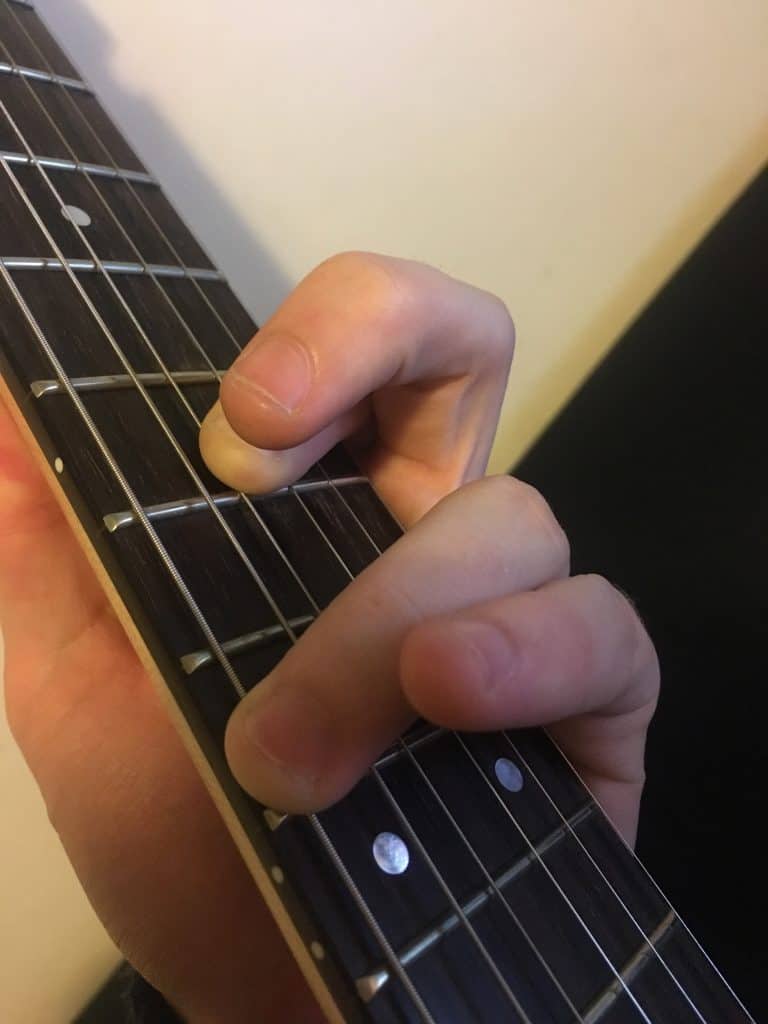 Barre strings 2, 3 and 4 with your 9th fret while muting the 1st string to avoid it ringing out. Bring your 4th finger all the way over the neck so that it presses down on the 10th fret of string 6, and use the same finger to mute the 5th string.

An Emaj7 chord is simply a major chord with a major 7th attached to the top. This often gives it a very uplifting sound, but there is an underlying dissonance due to the major 7th interval.

This means that the notes in an Emaj7 chord are E-G#-B-D#.

The dissonance of an Emaj7 chord is balanced out by its satisfyingly shimmering sound. While there is a harsh major 7th interval within it, the way the intervals stack make the chord surprisingly consonant in many contexts. A few examples are:

The open version of Emaj7 is probably the hardest open E chord, but it still won’t take long to get to grips with. Due to the low strings and quite small intervals, this chord can often sound slightly muddy. 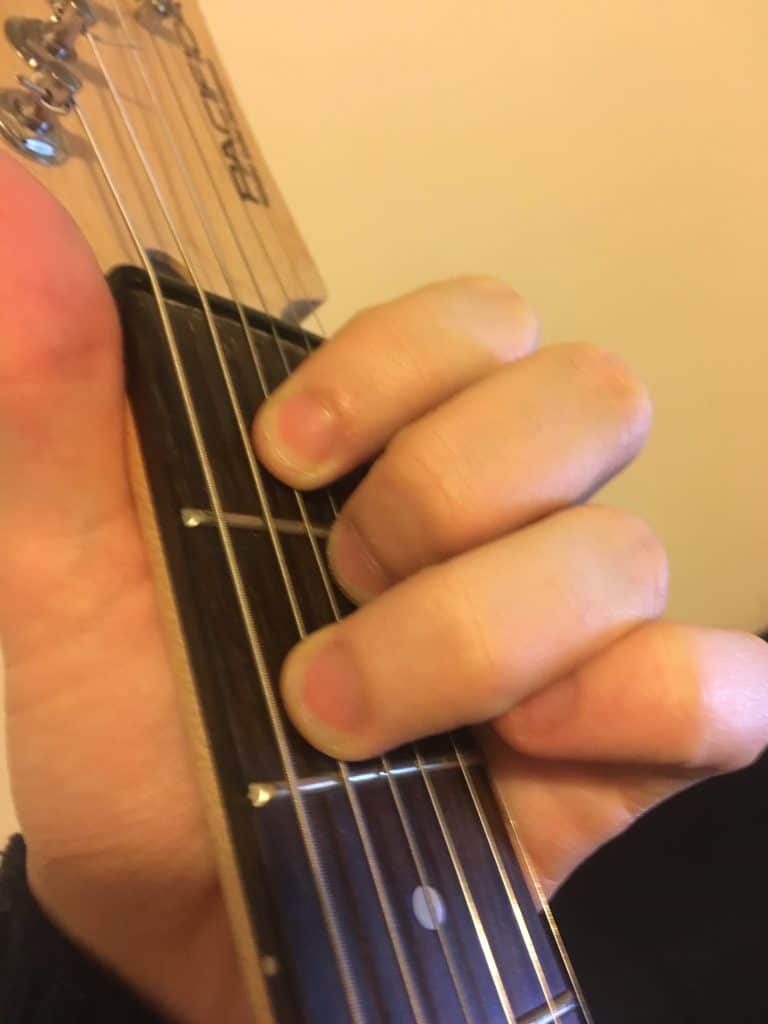 This is the moveable maj7 shape that can be transposed up and down the neck as you wish. This is my personal favourite way of constructing this chord, as each interval is spread out perfectly. 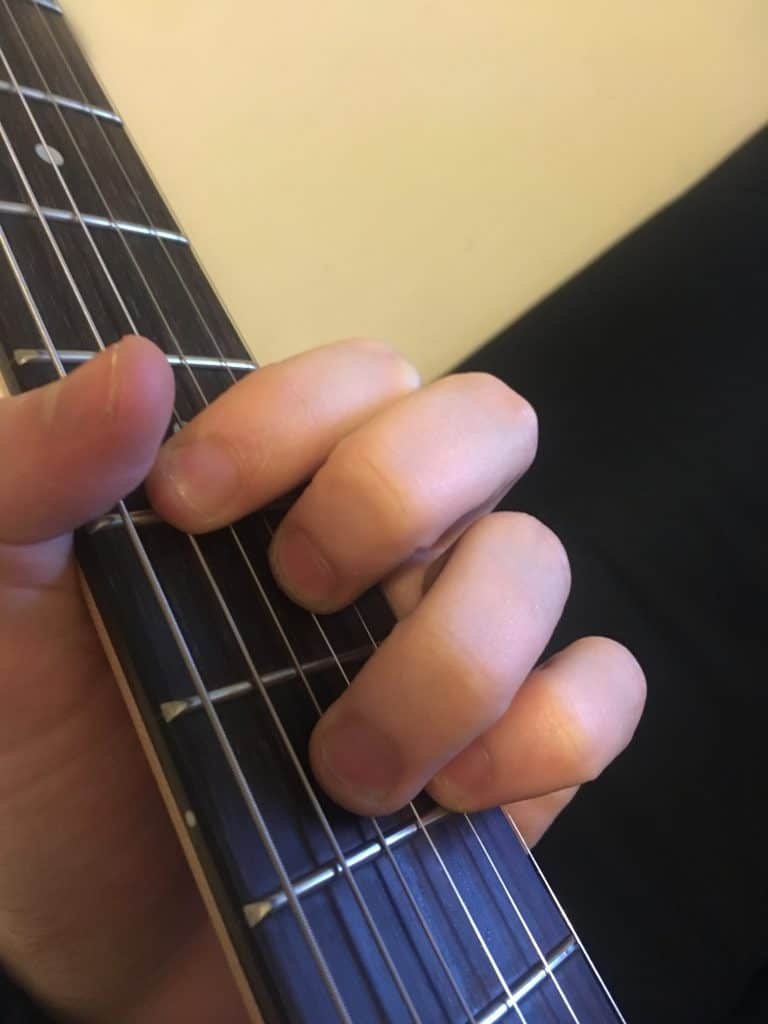 If you can manage the spread of frets (which should be doable, as this one is pretty high on the neck) then this is probably the best way to arpeggiate the Emaj7 chord giving a harp like sound. 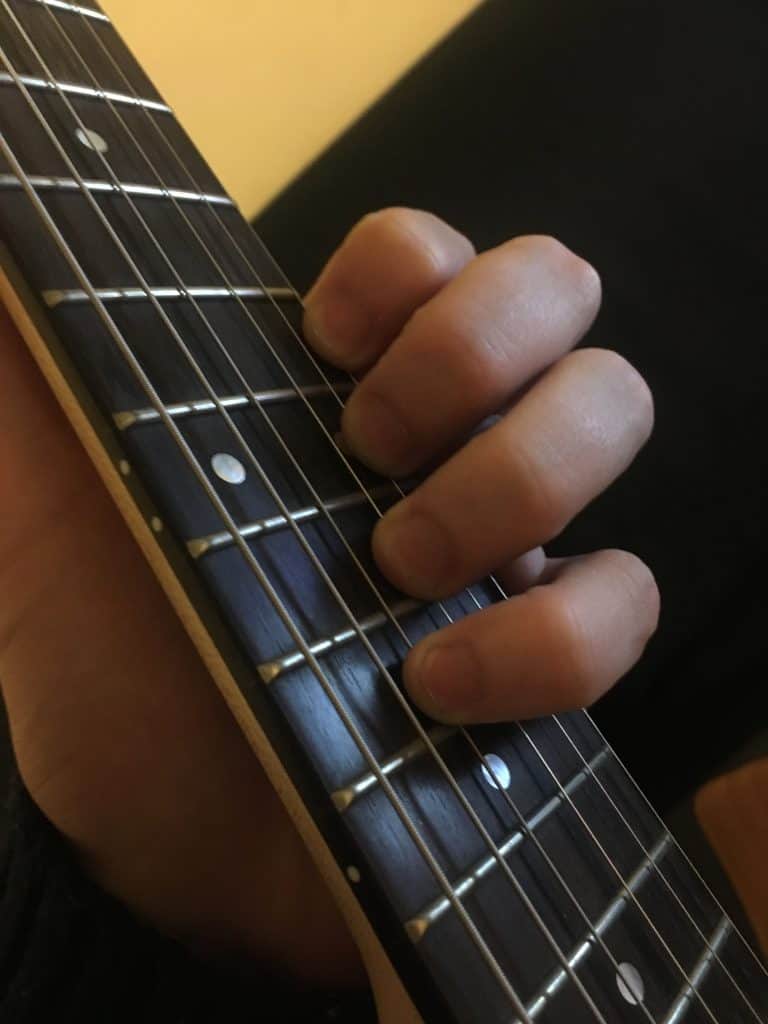 This means that the notes in a Em7 chord are E-G-B-D.

Songs That Use Em7

Em7 is similar in its use to Emaj7, as it can provide a nice sound when used in pop music, but has jazzy elements that allow it to be used in many other genres. Some examples of its use include:

We’ve now finally reached the easiest chord for guitar, as you’ll only need to use 1 finger. Much like the low Emaj7 chord, this chord often has the issue of sounding a bit muddy due to the low 7th interval. 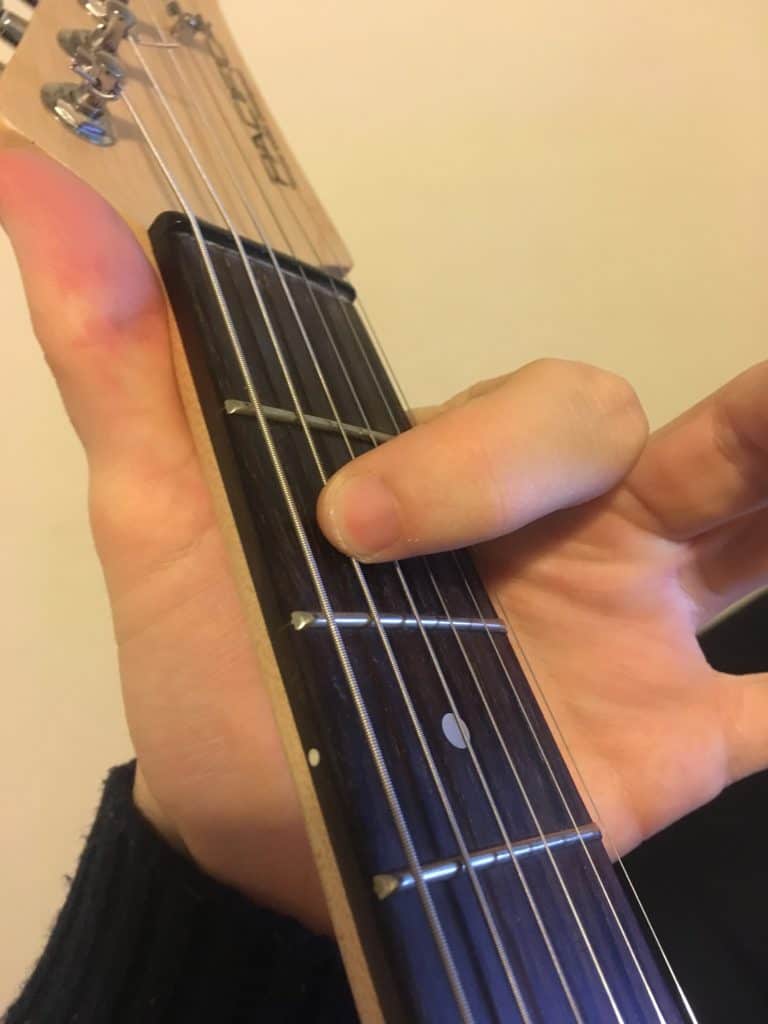 Simply press your 2nd finger down onto the 2nd fret of the 5th string and you’re done! Every other string in this chord can be played open.

The moveable variation of the m7 chord takes place on the 7th fret when based around E. This one works especially well in many genres, as it is particularly easy to mute. 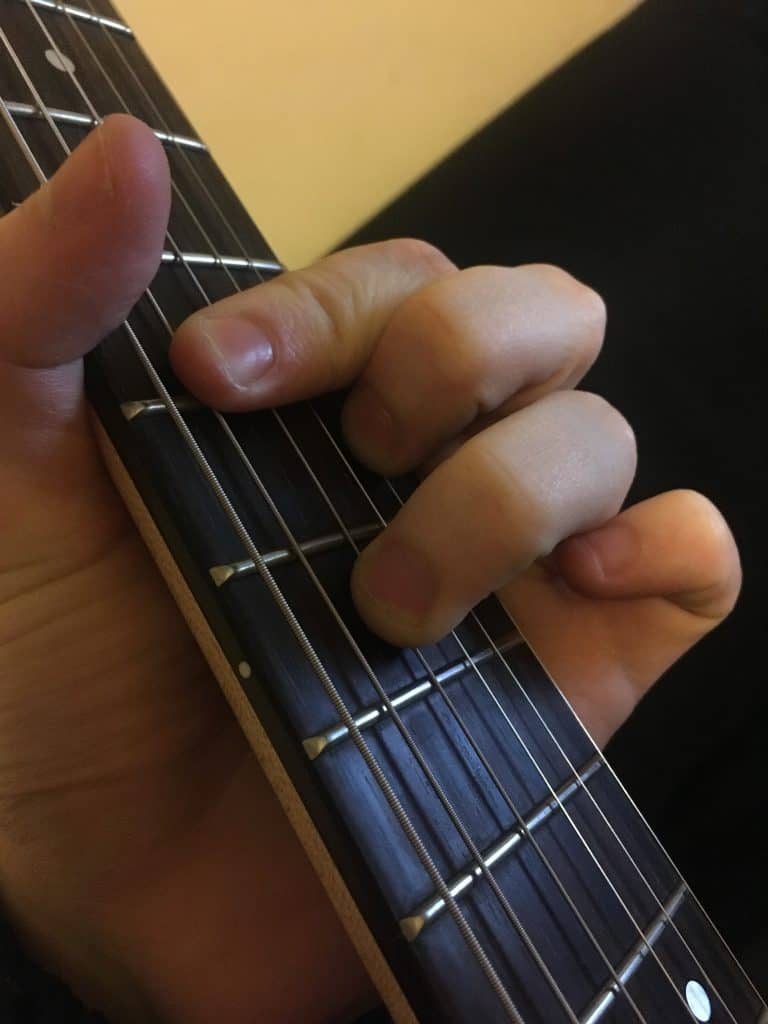 When taken up an octave, the barred, moveable m7 shape is one of the easiest barre chords you can play. Much like its similar cousins, this one won’t work particularly well on an acoustic guitar as it’ll be too high up on the neck. 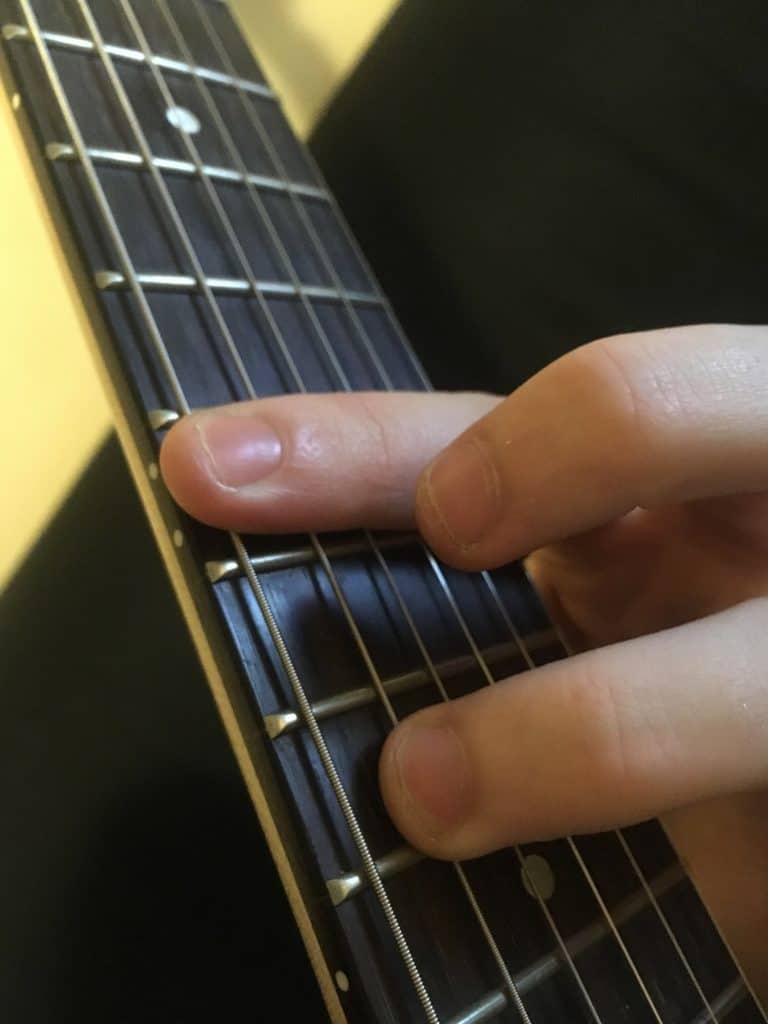 Barre the 12th fret with your 2nd finger, and the use your 4th finger to press down on the 14th fret of the 5th string.

There are a lot of other types of chords you can use based around a E tonic. The ones I’ve shown you so far are probably the most common you’ll come across, particularly major and minor.