The F#m chord, pronounced F sharp minor, seems like an intimidating chord at first glance, especially if you’ve just mastered the more simply named major and minor chords. But believe it or not, chords with accidentals (# and ♭) can be played in a variety of ways. Some of these versions are actually quite simple to play and still sound good.

Plus, variations are also good to know for if you happen to be playing with other people. Two rhythm guitarists might make a fuller sound, but adding a little complexity by not playing the exact same thing creates a beautiful and interesting sound. You also can let your creativity run free.

Here’s how to play the F#m guitar chord in easy, medium, and hard variations.

The natural F# minor scale has three sharps, F#, C#, and G#. You can easily see this when you look at the circle of fifths. The notes for the chord are taken from the first, third, and fifth degree or interval of the scale.

It’s called a minor chord because, in relation to the major chord, it has a flattened third. The F# major scale is as follows:

The A has been flattened, meaning, it’s been lowered half a step or by a semitone, resulting in a minor chord.

How to Play the F#m Chord: Easy

F#m is common in the key of E, and you’ll get it in the key of A too. These two keys aren’t the most popular ones, but you’ll come across them from time to time if you play regularly with others. These easy versions will have you feeling confident to play in these keys.

This version is easy in that you only play three consecutive strings, all in the same fret. This can also make it harder, especially if you’re new to strumming, since you can only strum strings 1-3. But it’s a lovely voicing, slightly higher pitched with no bass.

If it hurts to barre the string, just remember that regular practice will give you the calluses you need. 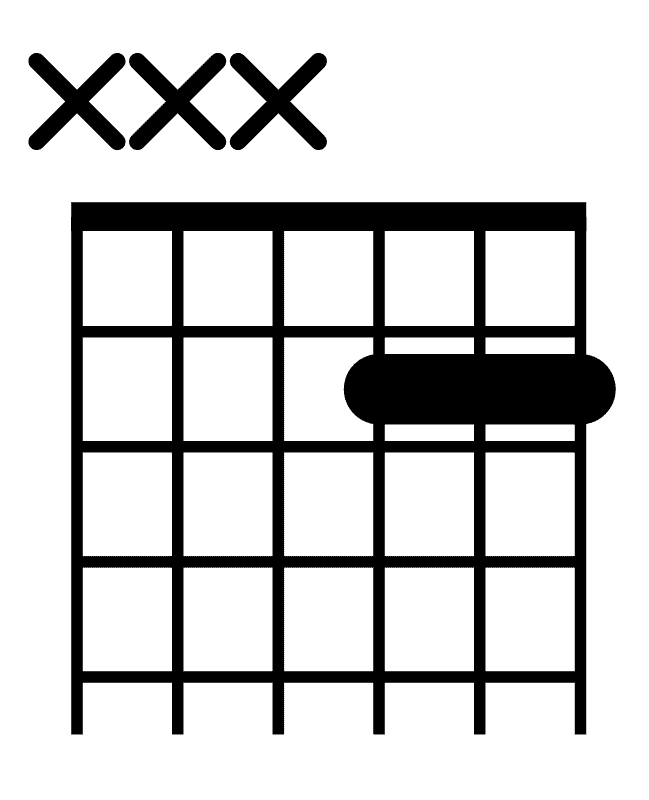 This chord sounds like a mix between a minor seventh chord and a sus chord. It’s a lovely variation, and if I’m 100% honest, I’m a little confused as to what it is exactly. It has a B, which if you omitted the third interval gives you F#m sus4.

But it also has an E which, if you tacked it onto the back of the F#m triad, would make it a seventh. I suppose that explains the sound. Still, this chord is not an F#m7sus4. Don’t worry, this is the most complicated thing about this chord.

Whatever variation of F#m this is, it sounds great and is super easy to play. There are no skipped strings, so you can strum away to your heart’s content and create a beautiful picking pattern.

How to Play the F#m Guitar Chord Version 2: 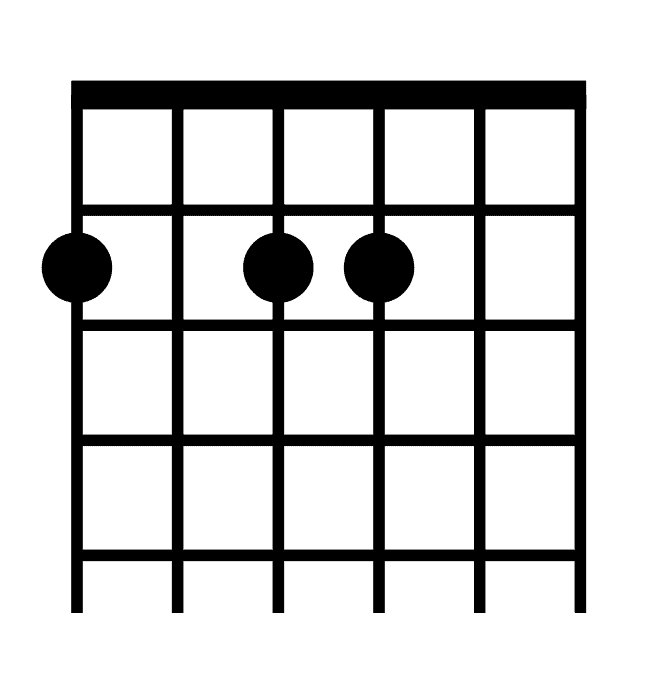 This version gives you a little more bass with the additional F# on the fourth string. It’s easy enough if you master the barring of the three strings. Then this chord only requires two fingers. You play strings one to four which makes it slightly easier, especially if you’re picking. It’s easier to make a good sounding picking pattern with more strings.

How to Play the F#m Guitar Chord Version 3: 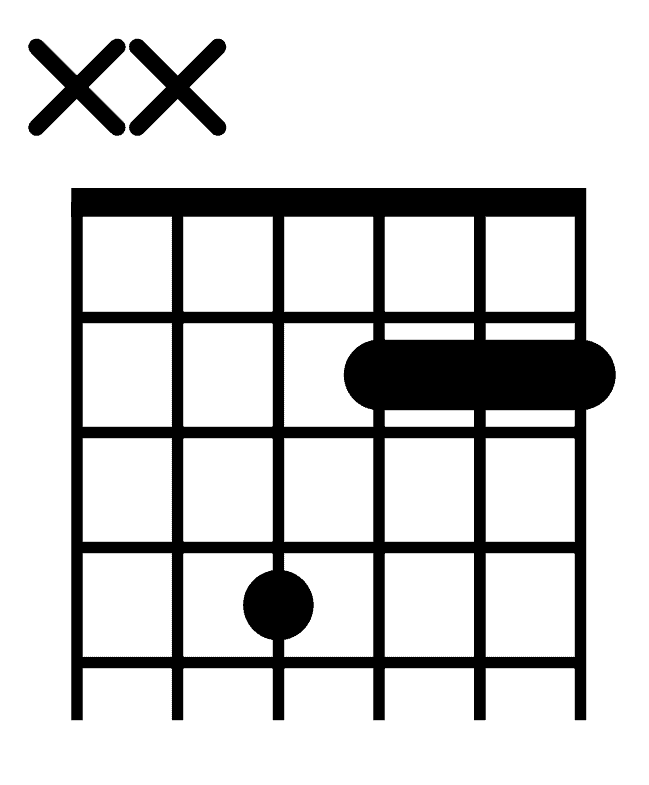 How to Play the F#m Chord: Medium

These shapes are a little trickier, but with regular practice, you’ll find them easier and easier. Don’t give up on the barre chords if you struggle with them, you just need to build up the strength in your hand and some calluses.

This barre chord uses the Em shape with the root note on the sixth string. If you struggle to get all the strings to ring out clearly, use your middle finger to bolster your index finger.

How to Play the F#m Guitar Chord Version 4: 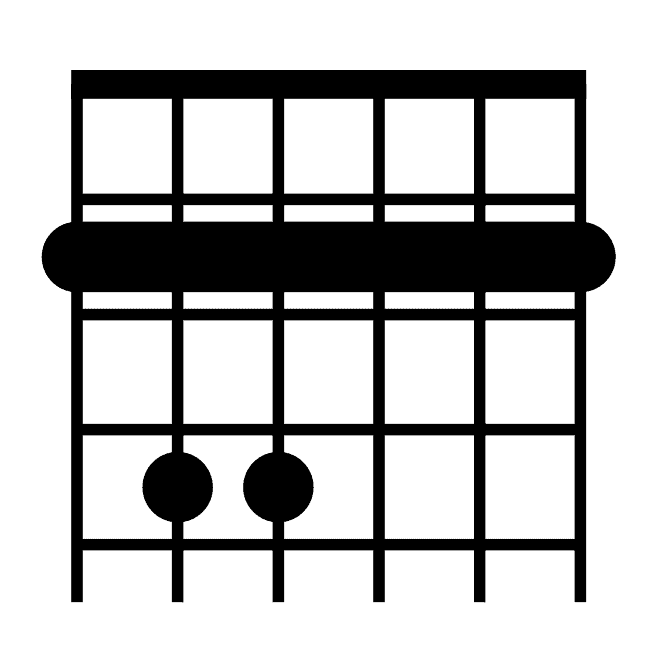 This barre chord uses the Am shape with the root on the fifth string. You technically only need to barre five strings, but you can barre all six if it’s easier. But don’t play the sixth string as you’ll get a B. It doesn’t sound terrible, so if you do accidentally strum the 6th string, it isn’t the end of the world.

This is a higher pitched voicing given how high up on the neck it is. It sounds good on its own and goes well with lower voicings of F#m too.

How to Play the F#m Guitar Chord Version 5: 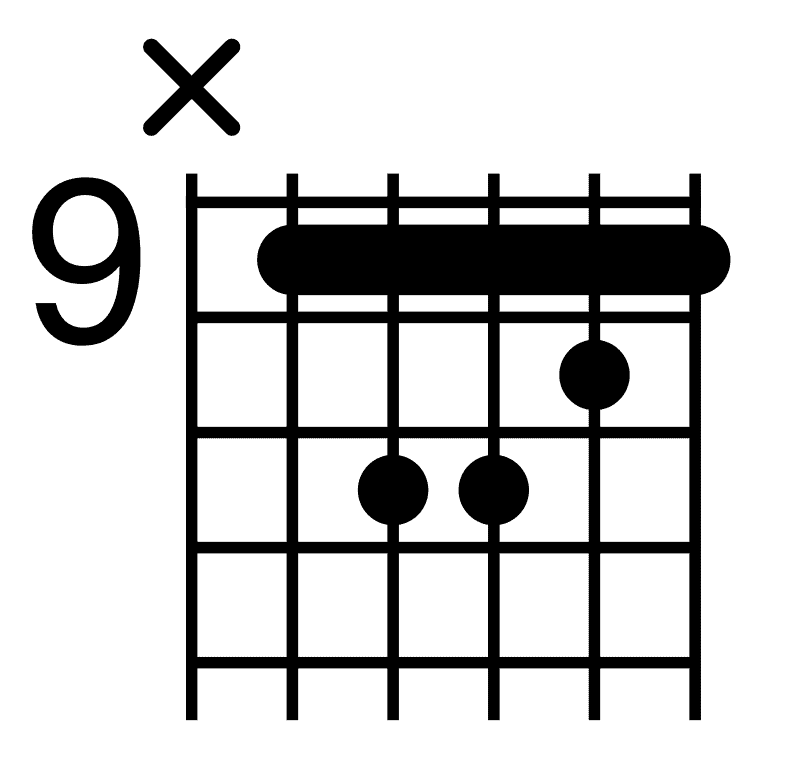 How to Play the F#m Chord: Hard

These shapes will take some more practice, although depending on your particular hand mechanics, you may find some of these shapes easier than the barre chords.

This variation only requires strings one to four to be played, but the shape requires some stretching. This shouldn’t be a problem if you have big hands, but it can still be an awkward shape. But don’t give up, with practice, your fingers will become more dexterous, and you may find it easier to play across four frets. 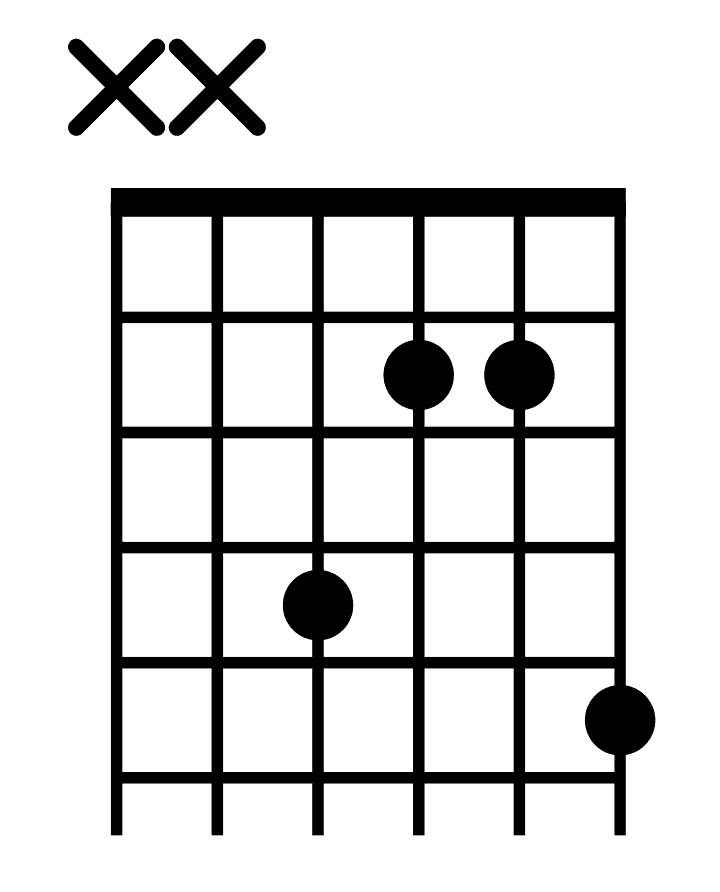 If you’ve got the wrist power and/or the finger “stretchiness” to play this chord, awesome! It takes the lower voicing of the Em barre chord shape version and adds on a higher pitched A. If you enjoy the sound, practice it regularly to become proficient. 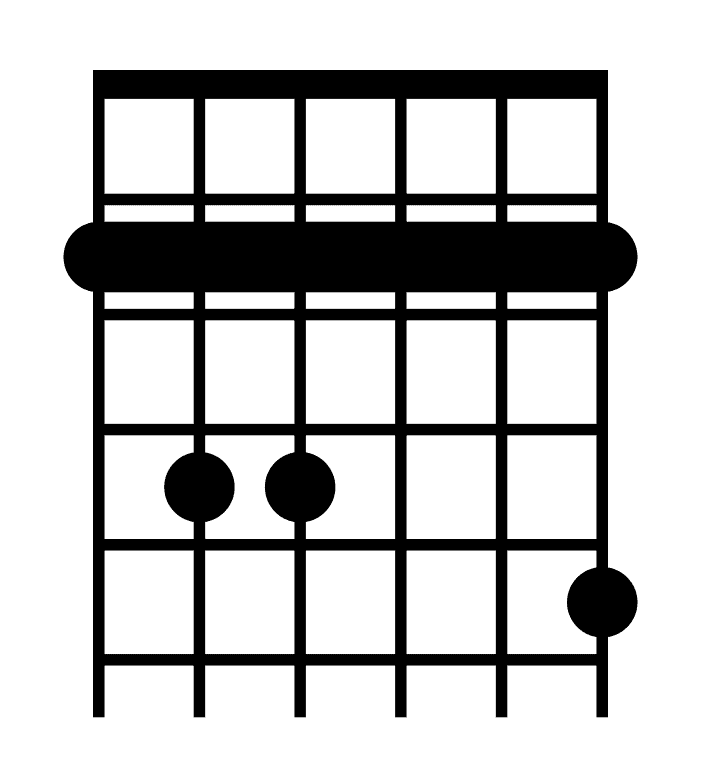 This chord requires a lot of precision if you’re strumming. Alternatively, you can mute the open string with your thumb and the side of your index finger. It also works well for playing with your fingers. It can be a little awkward to get used to adjusting the angle of your hand to play this chord well. Be careful to play just the three strings being fretted. 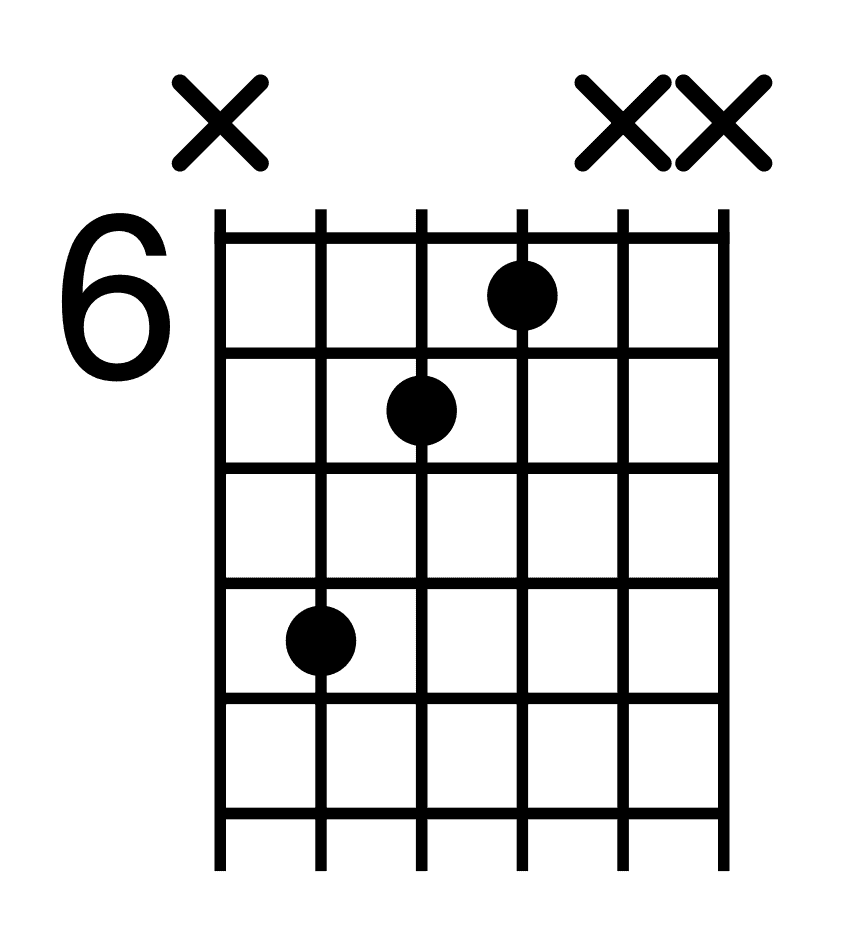 Well, there you have it. As complicated as this chord looks or sounds, there are easy ways to play it. The easier versions are great for getting you used to the sound and gaining muscle memory. They also give you options when playing with others. Start there and then work your way up to the harder versions.

Remember to have patience with yourself and keep going. Playing your guitar is the best way to strengthen your hand and get those fingers to go where you need them to more willingly.

Who knows, maybe F#m will turn into one of your favorite chords. 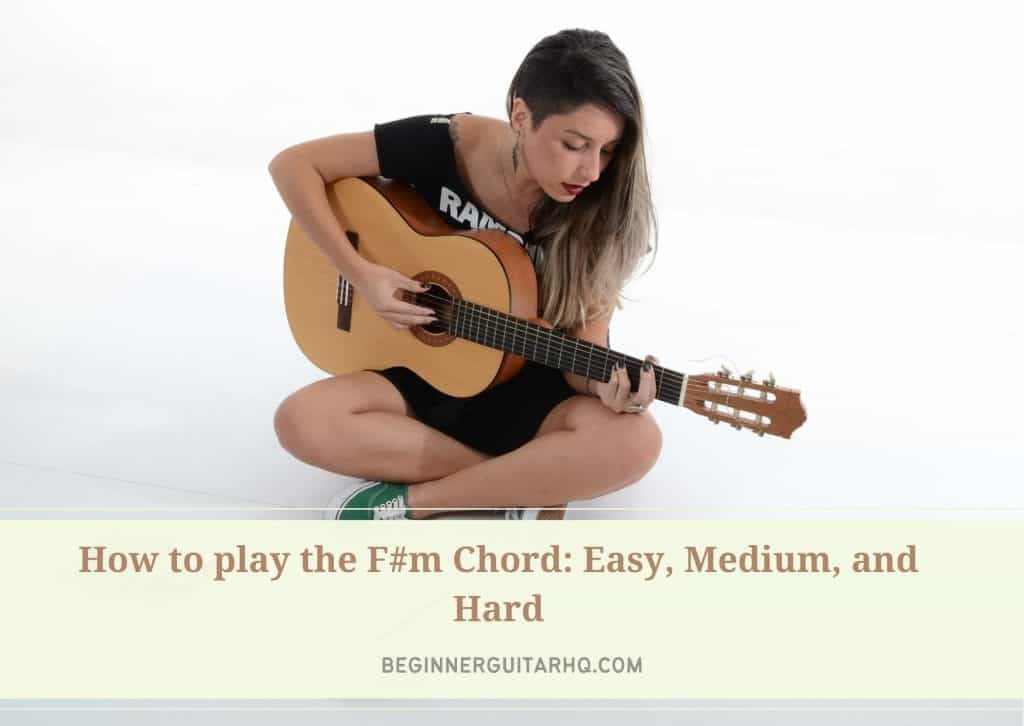