There are a lot of chords you’ll come across while learning guitar, but few of them will crop as much as a simple A chord. We’ve done a lot of guides to how to approach playing chords through various techniques, and many different variations on these basic shapes.

In this important guide, I’ll be taking you through a huge number of variants of the A chord:

If you’re looking for a place to start with A chords, then look no further…

Each of these notes (degrees of the scale) can be assigned a number as it ascends so you can use a helpful formula to work out chords from it. The A is a 1, the B is a 2 etc.

Once you’re familiar with the scale, you’ll do well to remember that the formula for an A major chord (and any tonic major chord of any key) is 1-3-5 which gives the notes A-C#-E.

Within the key of A major, you can make various chord sequences and work them out using this numbering system, but remember that A major is your tonic, and is where the key will sound resolved and at home.

Songs That Use A Major Chords

There isn’t much point in choosing to play an ‘A’ chord specifically (unless it’s to house a singer’s range etc.) as the actual note isn’t really going to change the sound of the chord, just the pitch. However, the way you play your chord is important and will determine which styles each variation should be used in.

This open A major chord is a classic shape that you’ve probably already come across, and can be used in any number of different situations. You’ll be able to pick this one up very easily. 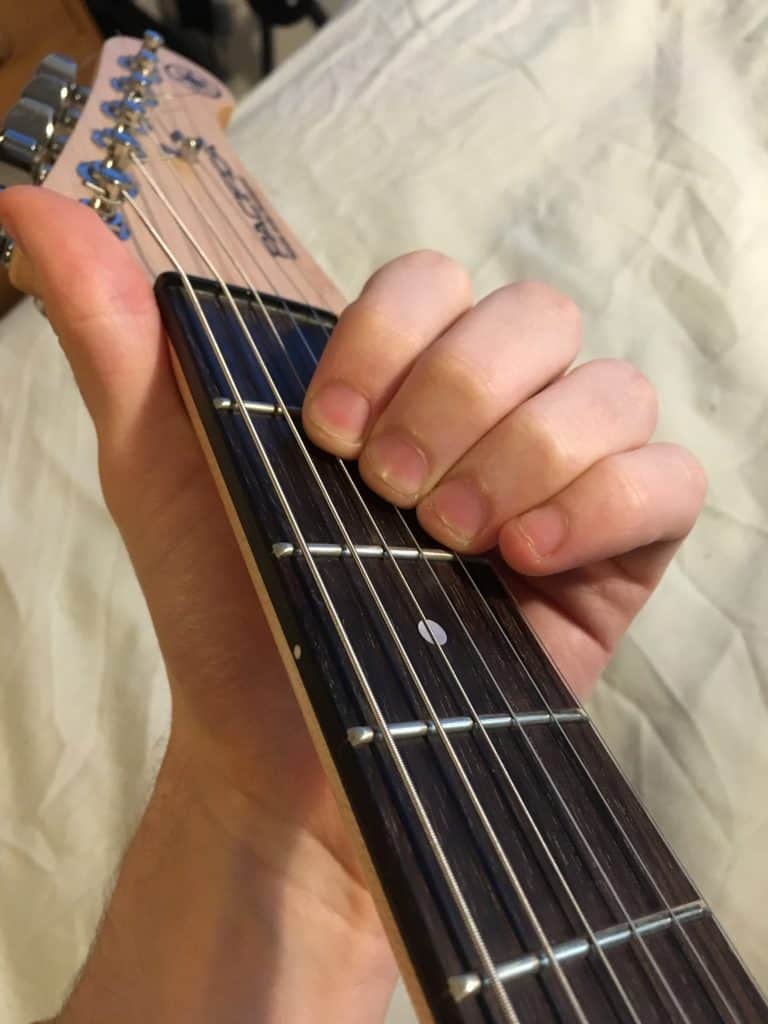 This variation of the A major chord is another easily moveable shape that will be able to create major chords on any fret. 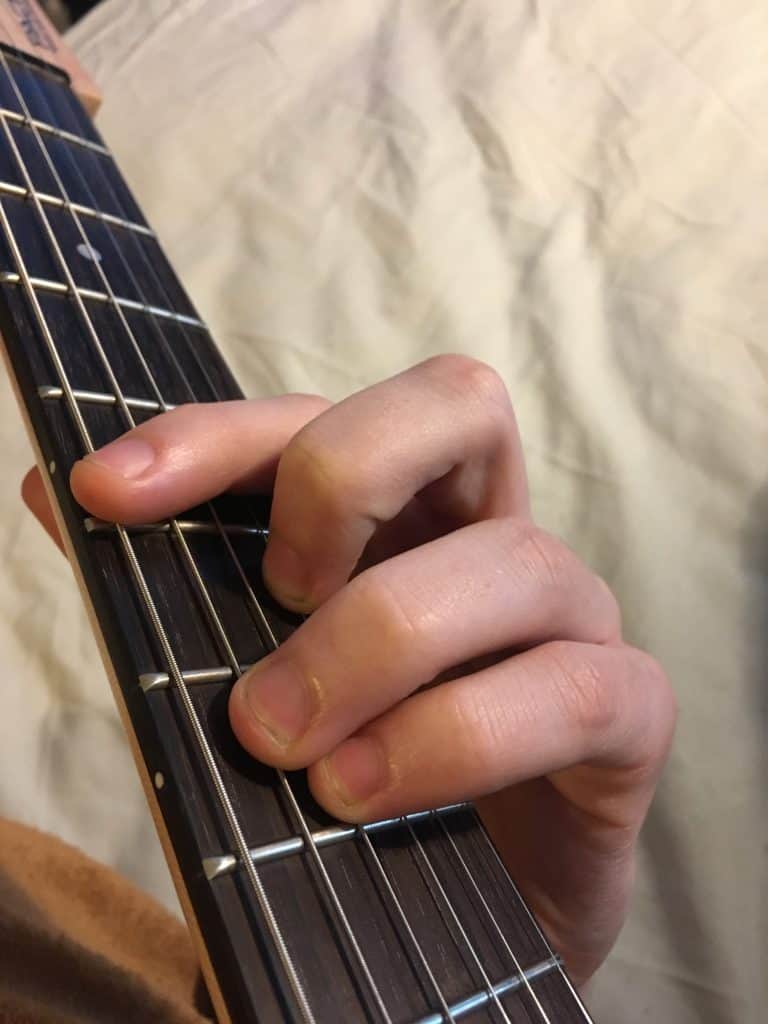 This is another version that requires a bit of stretching, but it isn’t too hard to reach these intervals, thanks to a small barre on the top strings. 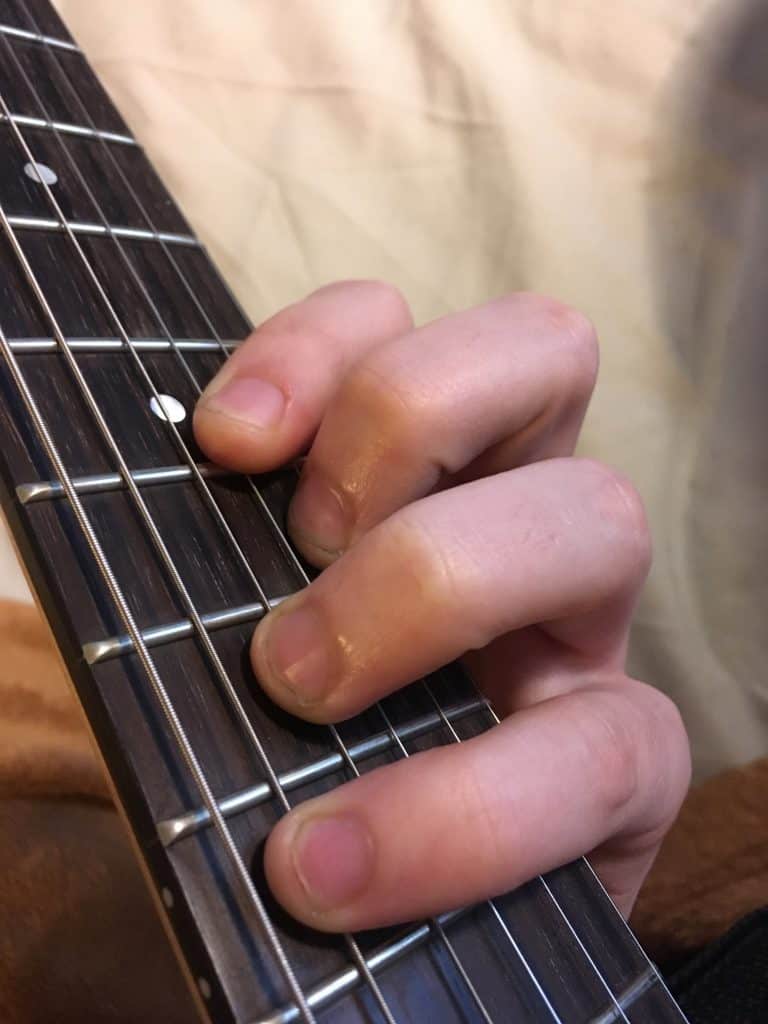 To play this one with ease, you’ll need an electric guitar as you probably won’t be able to reach high enough on an acoustic. This makes this chord pretty good for playing pretty dreamy music, as the fretting is so high. It’s essentially the open A major chord but up an entire octave. 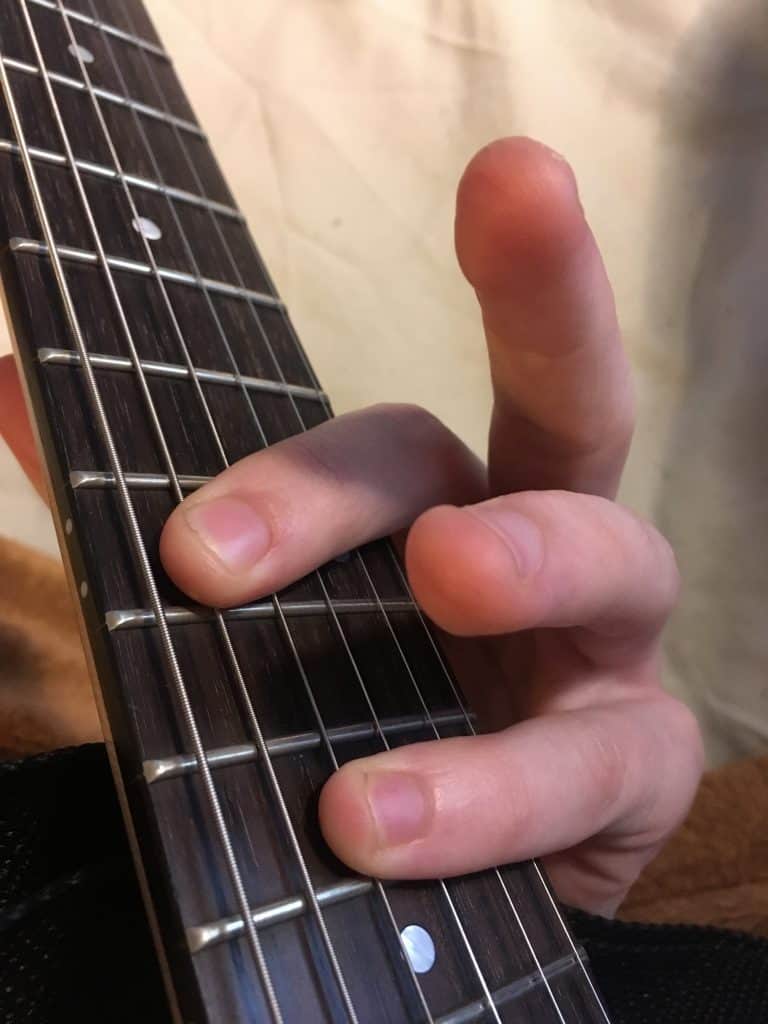 Use your 2nd finger to press down on the 12th fret of the 5th string, then barre across the 14th fret from string 4-2 with your 5th finger. Doing this will mute the 1st string, which is what you want, but make sure to mute string 6 too.

A minor scale differs slightly from a major scale in that degrees 3, 6 and 7 are all flattened, so they are lowered by one semitone. This creates the A natural minor scale (variants such as the harmonic and melodic minor will be looked at in a separate guide).

Songs That Use A Minor

Again, rarely does a song seek to use the A note specifically, but rather the minor chord. Whether it is as part of the key and therefore makes sense, or to bring out its sadder sound than a major chord, a minor chord is something important throughout all music.

Another one of your very first chords is the open Am variant. In guitar music using open chords, you’ll see this one a lot. Each string rings off of each other perfectly, but using overdrive on this one may not be a great idea. 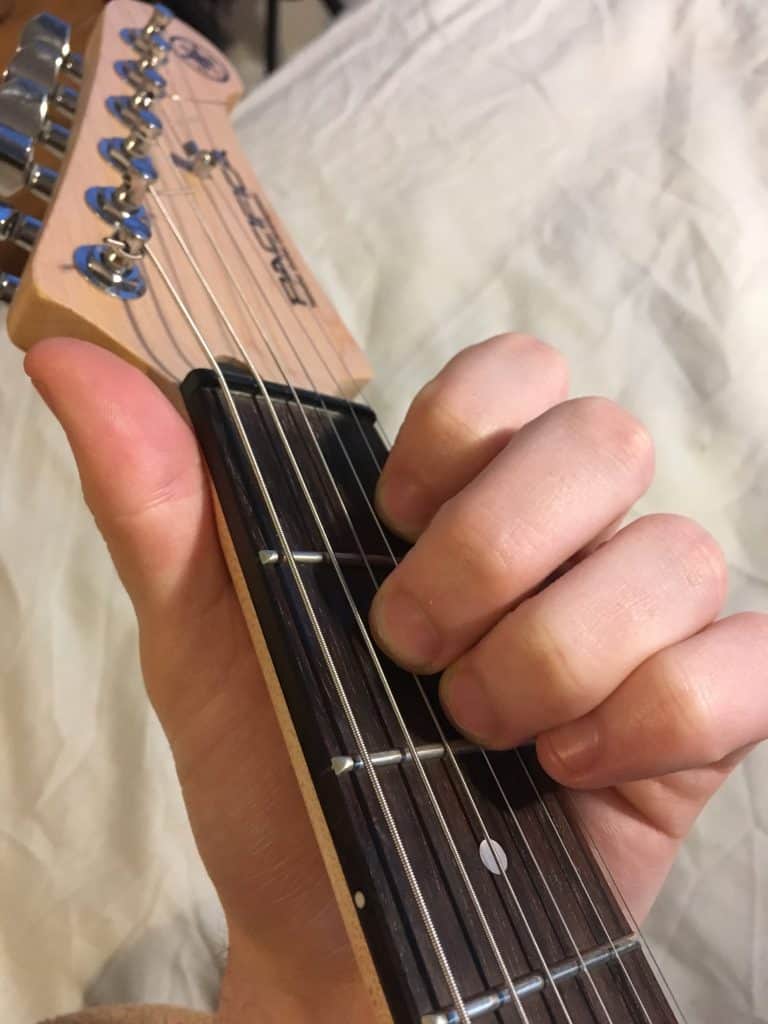 The barred version of the Am chord is quite an easy one to move up and down the neck, just like its major equivalent. This is a good replacement when you’re using overdrive, as it is a lot easier to mute than the open version. 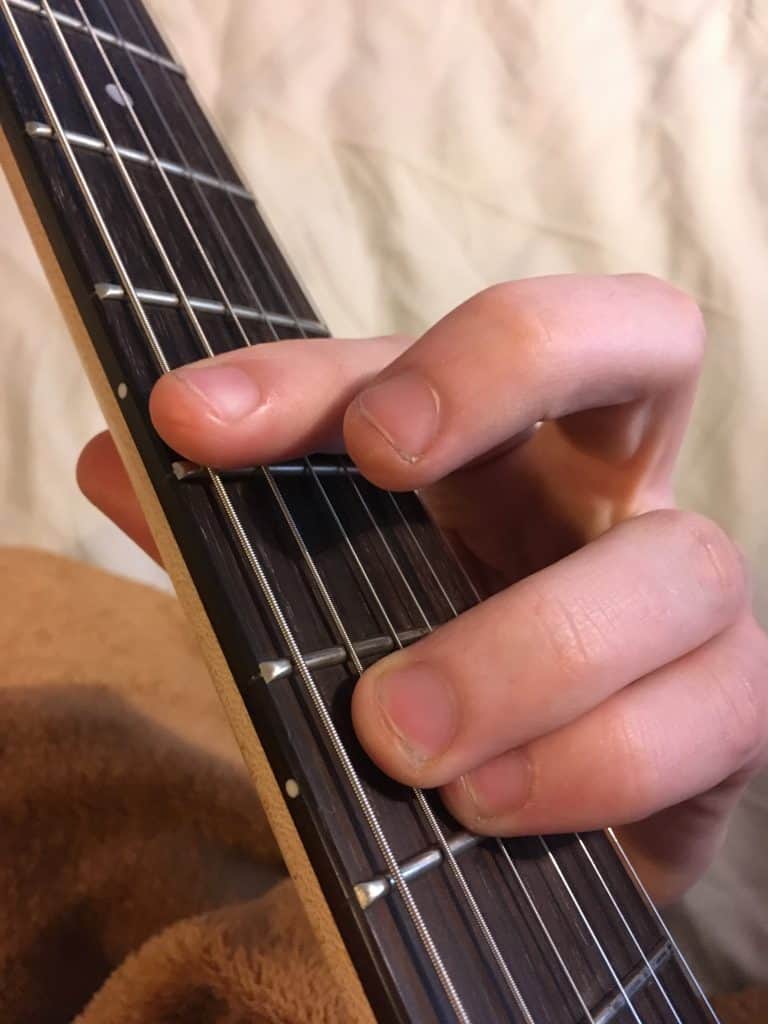 This one is pretty trick really, but if you can stretch your hands between frets/strings relatively easily, then you should be able to grasp this pretty well. As it only uses the 4 highest strings, this is another one of those nice harp-like chords that give off quite a dreamy sound. 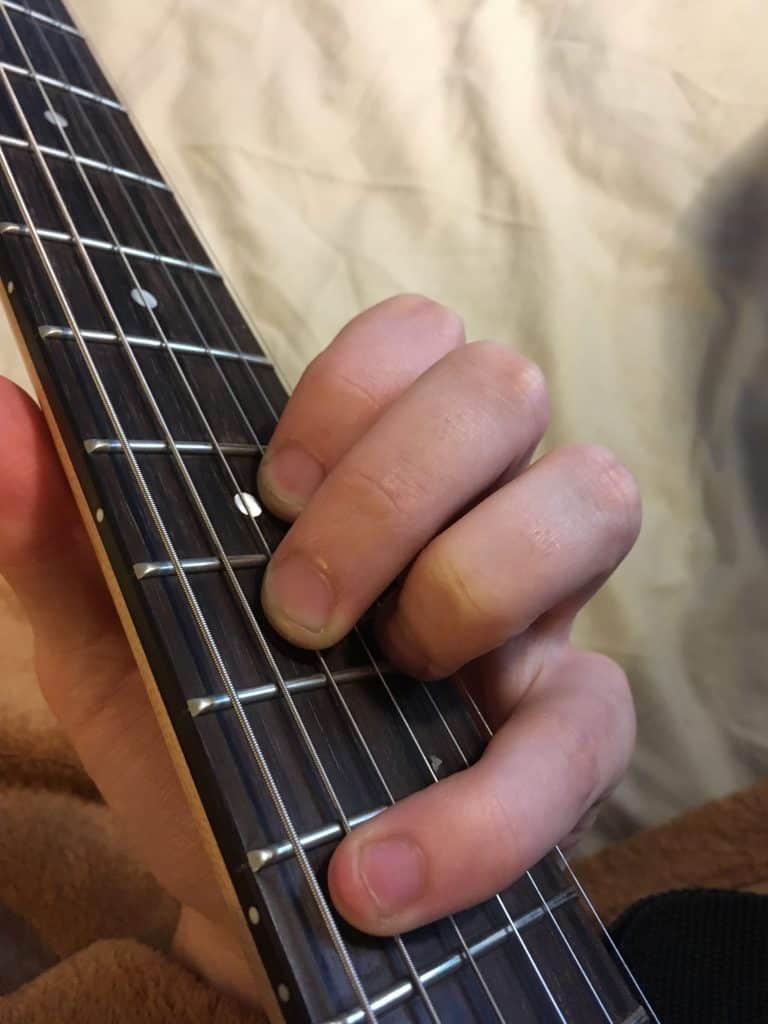 Like in its major alternative, this chord is essentially the open A minor chord shifted up an octave. This works well when you’re playing a funky, staccato chordal line, but is also a simple moveable minor chord shape that can be played on lower strings. 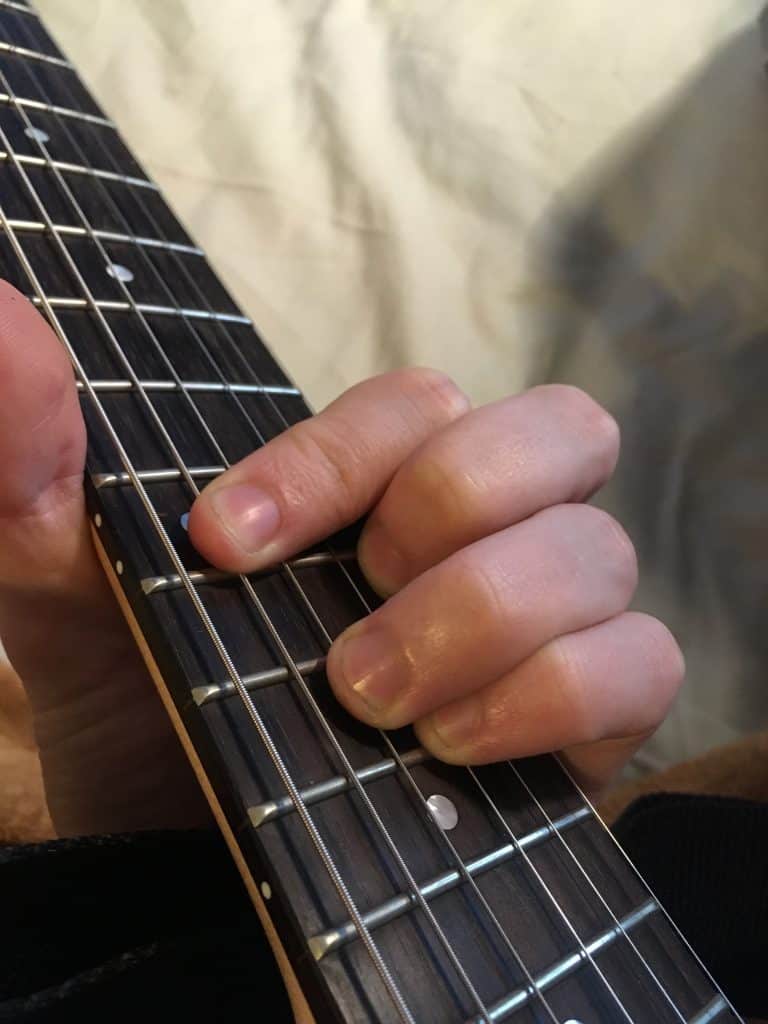 An A7 chord, or A dominant 7, is a major chord with an added minor 7th. This creates an interval of a tritone within the chord, adding a laying of dissonance to the sound. In a lot of music, the A7 is used as part of a perfect cadence, in order to resolve to the tonic. However, one of the primary uses of the dominant 7th in modern music, is as a part of jazzy chord sequences.

If we use major scale theory (which we would unless you’re delving into the realm of modality where this chord has a strong Mixolydian quality) then the formula for this chord is 1-3-5-b7. The b7 takes the G# of an A major scale down to a regular G.

Songs That Use A7

A7 chords are popular for use in guitar music as they have a lot of easy variations and are part of a simple E blues/jazz progression. The use of the dominant 7th gives a distinctive dissonance that allows the chord to be use in poignant parts of slower songs, while fit into jazzy, faster numbers.

A7 has a nice open variant that basically simplifies the open major chord by letting one of your fingers rest. This one is good when you’re playing non-jazzy stuff that needs an A7. 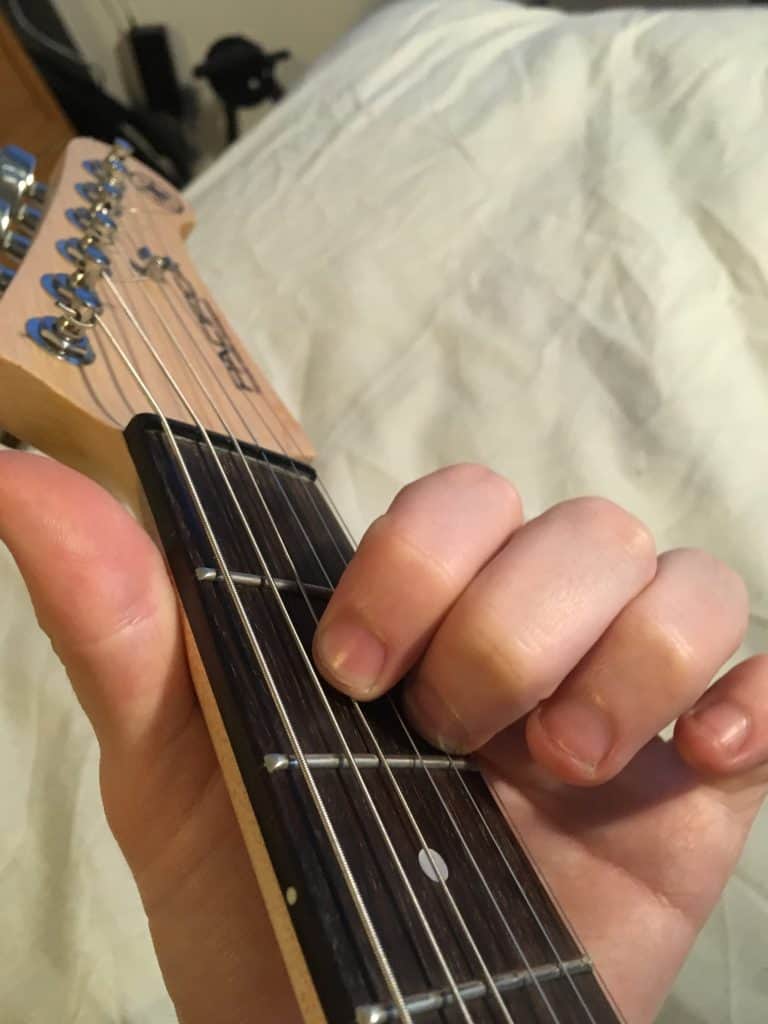 This variation is similar to the one I’ve just shown you above, but instead of the open string giving you the 7th interval, we get it from a higher string giving a very different tone. 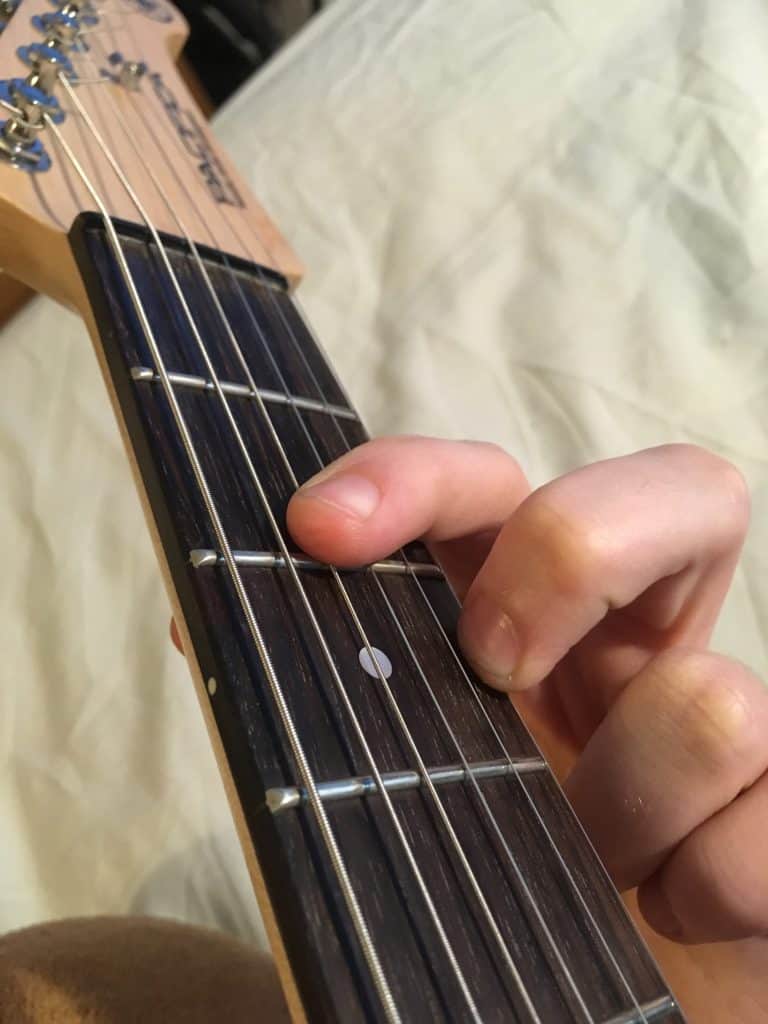 Barre across the 2nd fret from string 1-4 using your 2nd finger, and then add your 3rd finger onto the 3rd fret of the 1st string.

This is the typical barre shape for a dominant 7th chord, so this is yet another moveable shape that you can apply in a lot of different contexts and is really easy to pull off well. 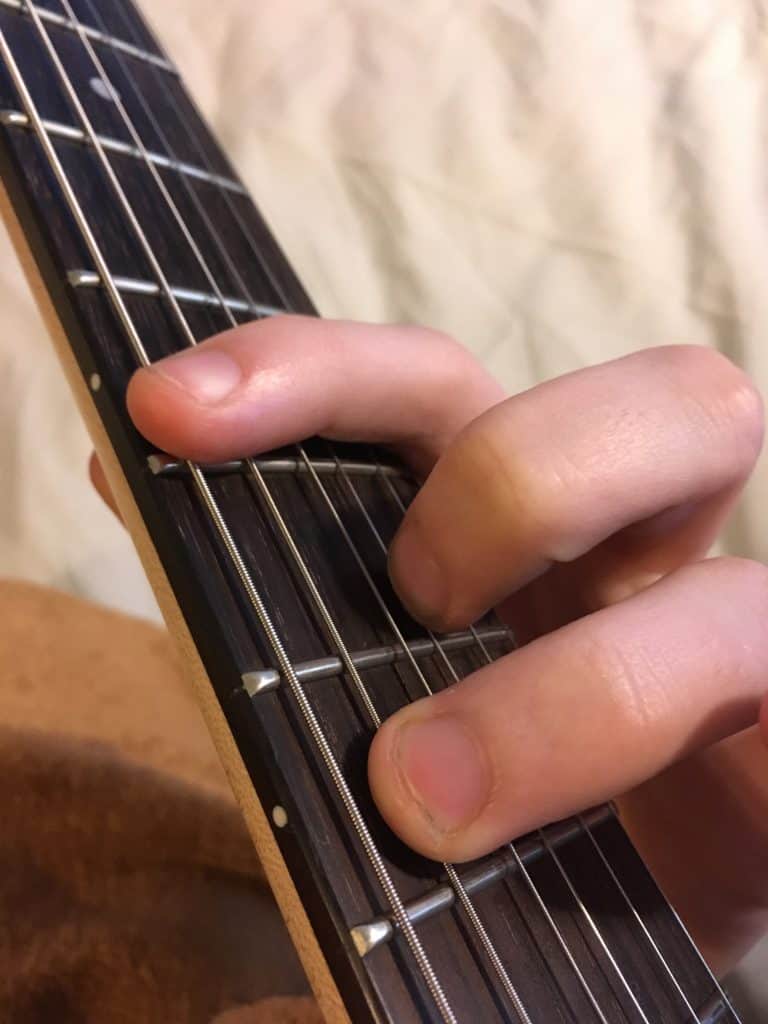 If you’re looking for one of the jazzy, higher shapes then this variation starting on the 7th fret is pretty easy to move about but it requires a bit of a stretch. 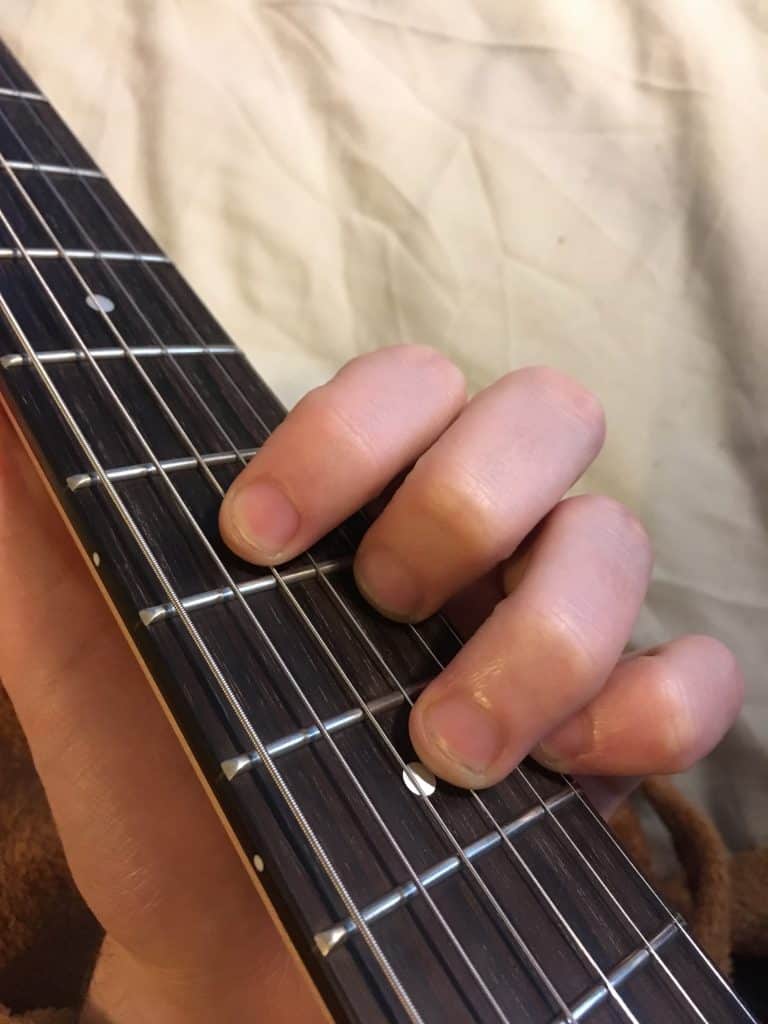 An Amaj7 chord is simply a major chord with a major 7th attached to the top. This often gives it a very uplifting sound, but there is an underlying dissonance due to the major 7th interval.

Songs That Use Amaj7

Amaj7 is a good one when used in many contexts due to its ability to slot well into jazz and pop styles. Soul music also finds itself with a lot of maj7 chords chucked in throughout.

This chord has a nice easy open variation that builds upon the A7 shape and is an easy way of playing the chord during acoustic tunes. 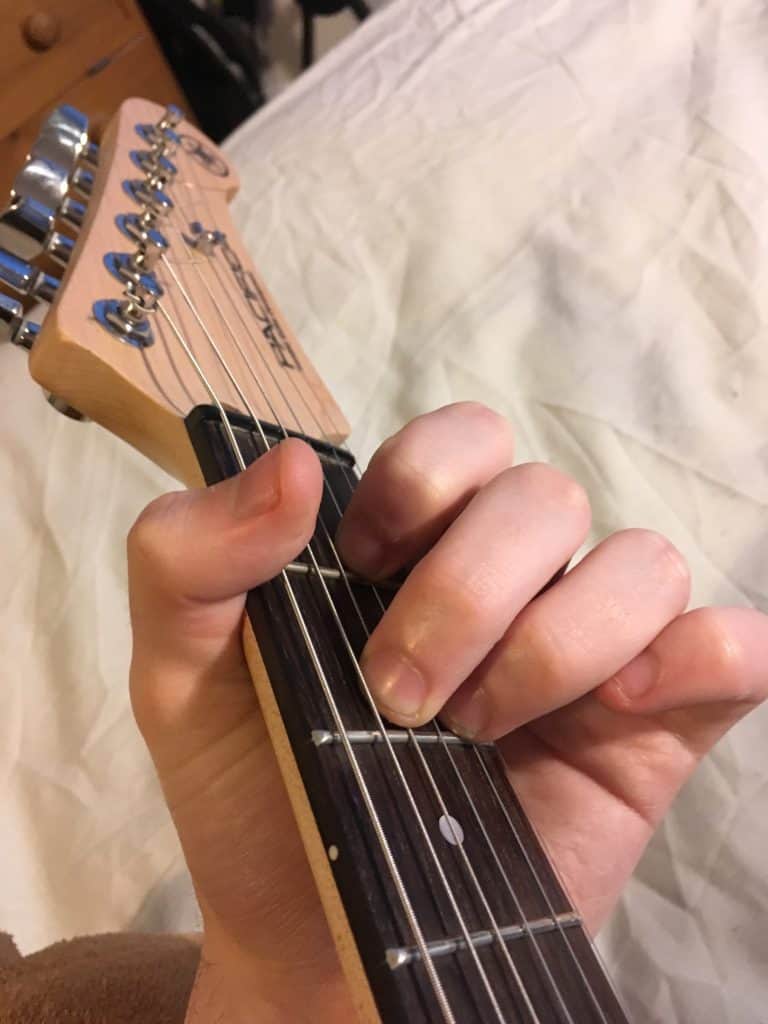 This is probably my favourite way to play Maj7 chords, and you make recognise its general shape from the open version of Fmaj7. It takes a little bit of a stretch, but it’s definitely doable. 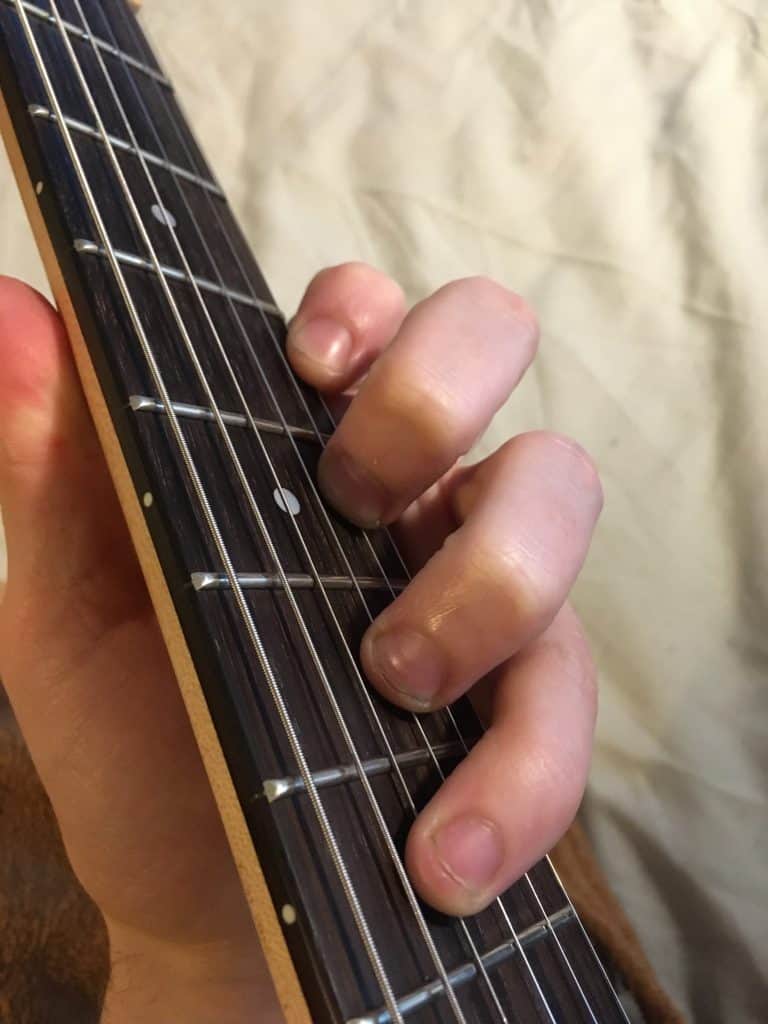 This one requires a strange little barre shape, as it is higher up on the neck than the non-barred notes, but as long you have a fair bit of 5th finger strength it should be no trouble. 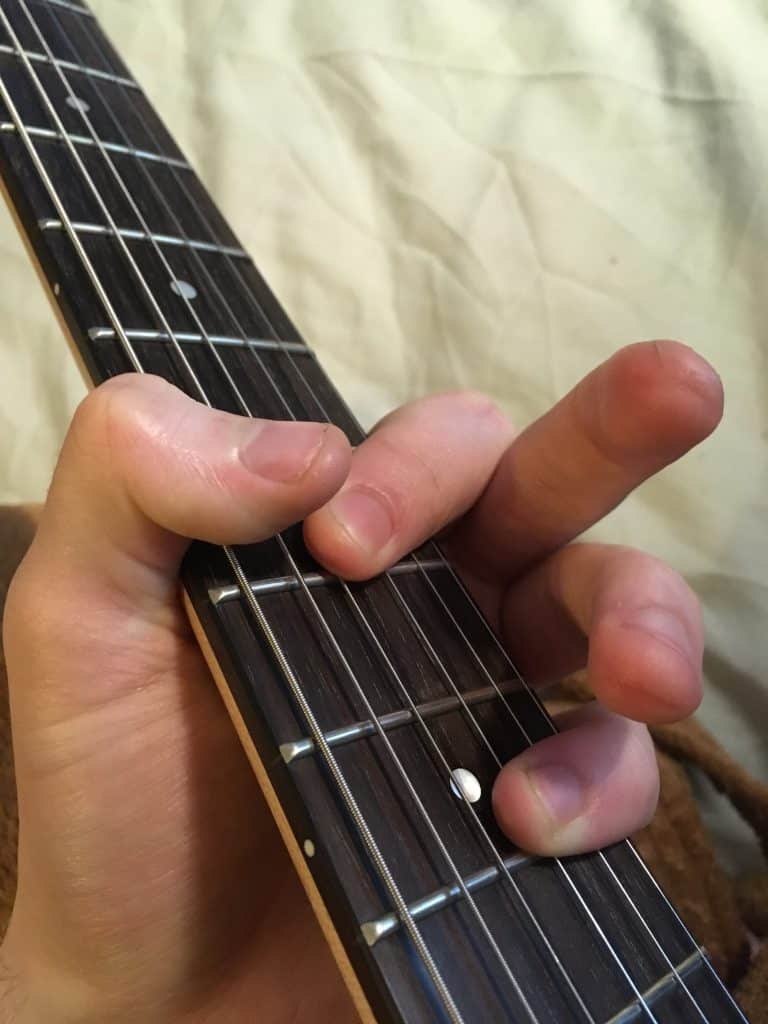 Barre across the 9th fret on strings 1-3 using your 5th finger, and then use your 2nd finger to press down the 7th fret of the 4th string. Make sure strings 5 and 6 are muted.

This means that the notes in a Am7 chord are A-C-E-G.

Songs That Use Am7

Similarly to Amaj7, Am7 can fit nicely into a lot of jazz music due its 7th interval, but equally it appears a lot in popular music styles as despite its dissonance, it has a pleasant tone.

This is the simplest way to play an Am7 chord, as it essentially follows the same shape as a regular Am chord, but slightly simpler. This is very easy to use in acoustic music, as it is an open chord. 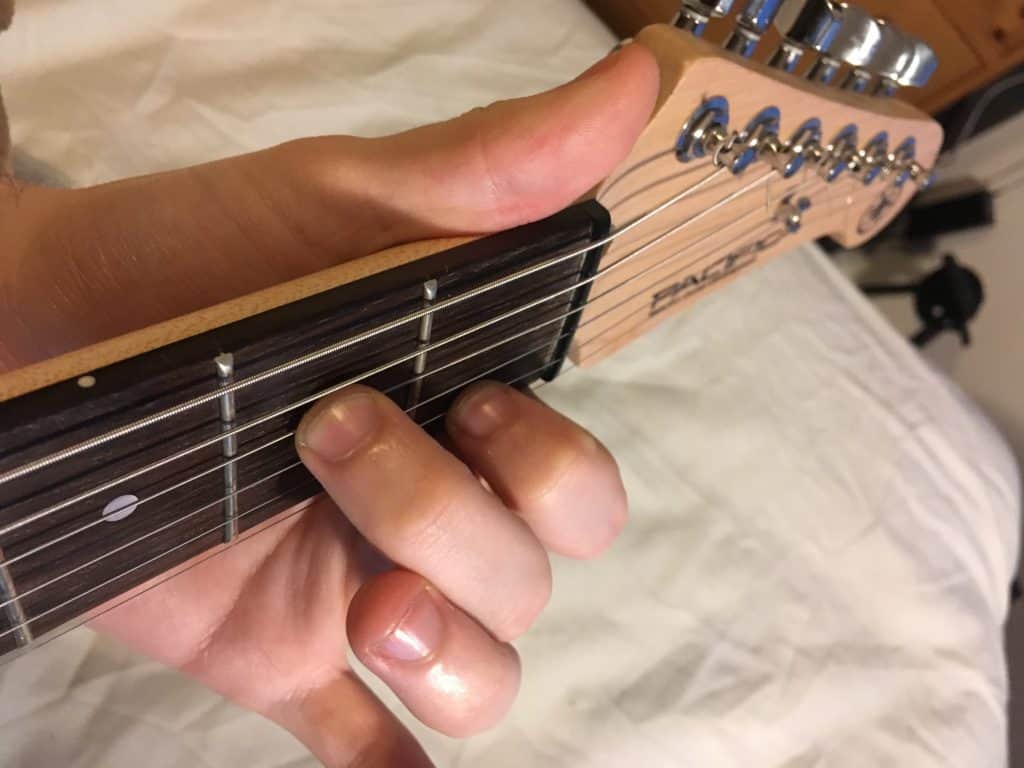 This barre shape is a classic moveable shape that allows you to play an Am7 chord on any fret, and is particularly good if you’re palm muting your chords. 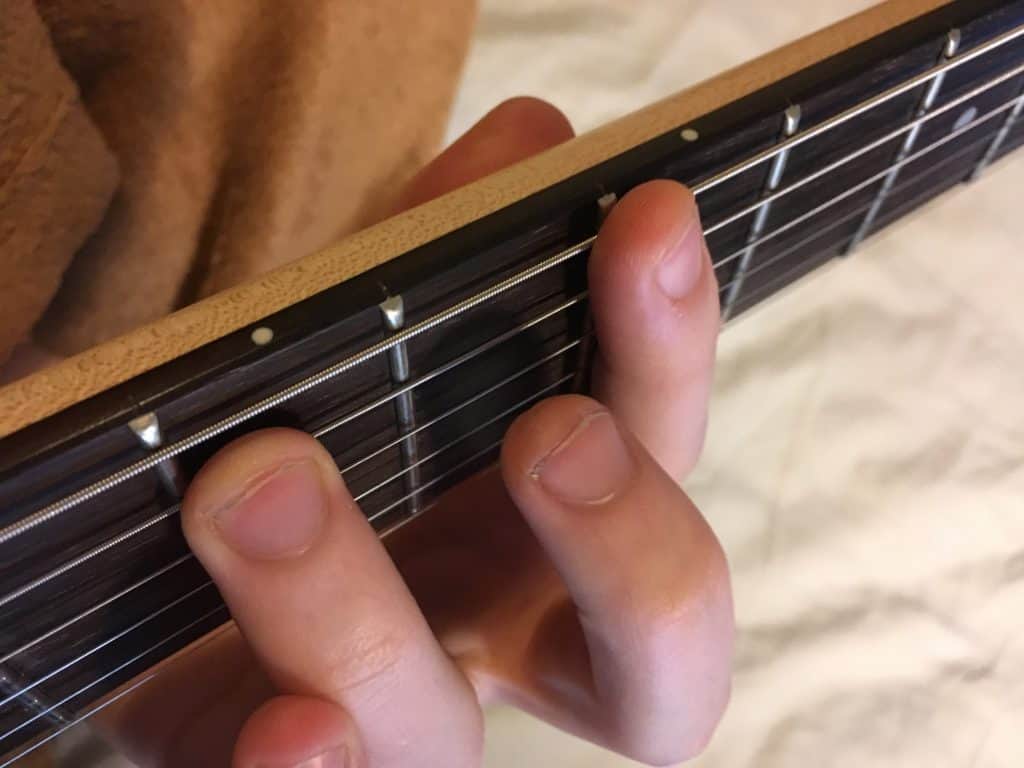 Start by barring the 5th fret with your 2nd finger, then place your 4th finger on the 7th fret of the 5th string. Make sure you are pressing down on the 5th fret hard enough on the 4th string.

This is another jazzy variation that allows for easy, sharp plucked chords high up on the neck, and like almost every chord shape, we can move it up and down the neck. 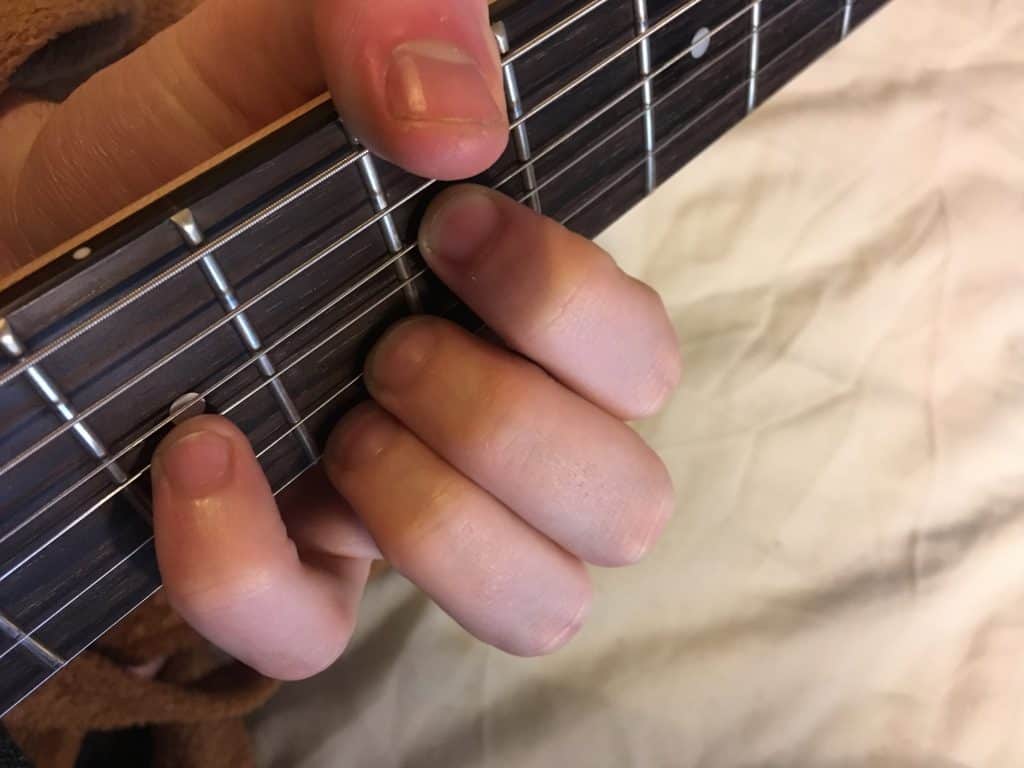 There are a lot of other types of chords you can use based around an A tonic. The ones I’ve shown you so far are probably the most common you’ll come across, particularly major and minor.