As a beginner guitarist, I had this impression that any chord that had a number tacked onto the back of it was hard. To be fair, they can be. But many of them are actually quite easy to play, as is the case with Am7. The beauty about the guitar is that you can get the same note in a few different places on the neck.

The Am7 chord has several variations that you can choose from based on your skill level and/or the voicing you like best. Because the variations are in different frets, you may also just pick one played in a certain fret, so you don’t have to do some crazy moving up and down the neck of the guitar based on the other chords you’re playing.

The Theory of the Am7 Chord

A chord triad (3 notes) is built on the first, third and fifth interval.

A major would be A, C#, E. But since we want the minor chord, we flatten the third making it A, C, E.

To make it a seventh, we add on the seventh interval, which in A major is the G#. But since we want a minor seventh, that is also flattened to make a G.

You could also look at it from the perspective of the A minor scale. This is the natural A minor scale. I say natural minor because there are three different minor scales. The natural scale, however, is simple and works perfectly for what I’m showing you.

To make it a seventh, we add on the seventh interval, the G.

So when we play the chord on the guitar, the open strings and the fretted notes will be a combination of A, C, E, and G.

Here is a video that explains seventh chords (there are five types):

The Easy Am7 Guitar Chord

This is one of the simplest chords out there since you only need to use two fingers and in a position that comes naturally too.

This version does have a slight jazzy tone to it, but it fits in well with regular open chords and when you play pop or acoustic versions of rock songs too. It’s a great chord that goes well with most genres, actually, whether played on an electric or acoustic guitar.

I often replace Am with this chord, since it spices up run-of-the-mill chord progressions in a mellow way.

How to Play the Easy Am7: 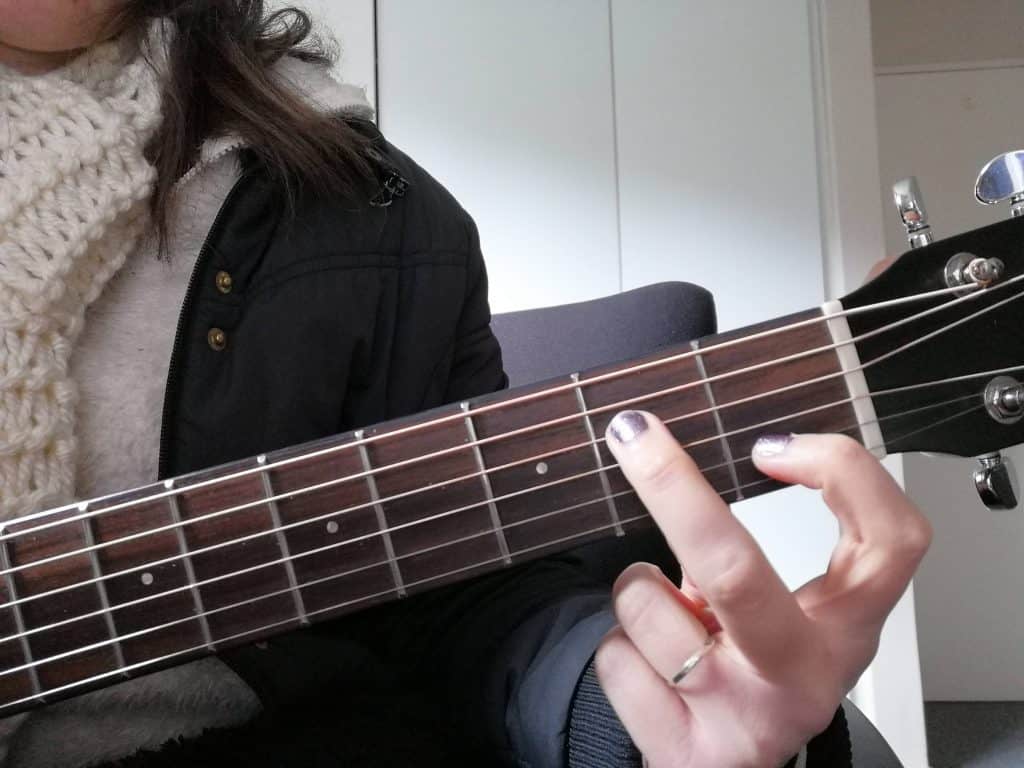 The Am7 Shell Chords

Shell chords use only three strings, the three fretted notes, and are generally used in jazz. Shell chords are moveable, meaning that you keep the shape and shift it up or down the neck to the root note.

If you don’t want to skip any strings between the fretted notes, you may prefer this version. You’ll see versions that require you to skip strings in the medium difficulty section.

You’ll hear that this one is low-pitched since it’s placed on the bass strings of the guitar. 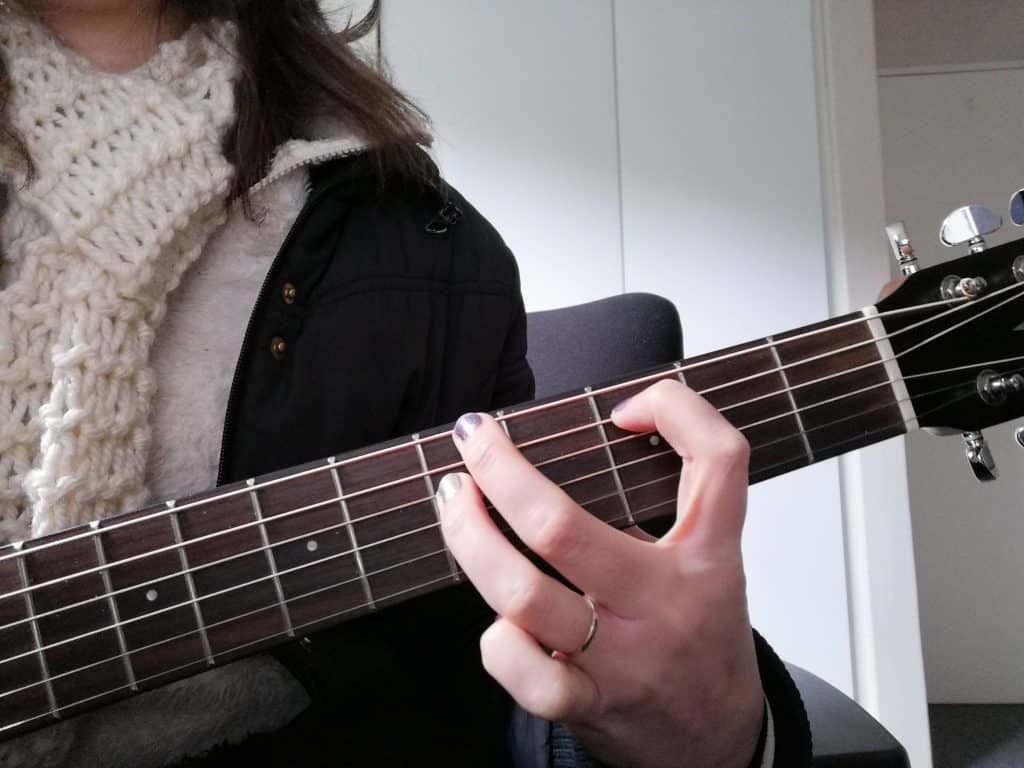 This chord has a higher pitched voicing. 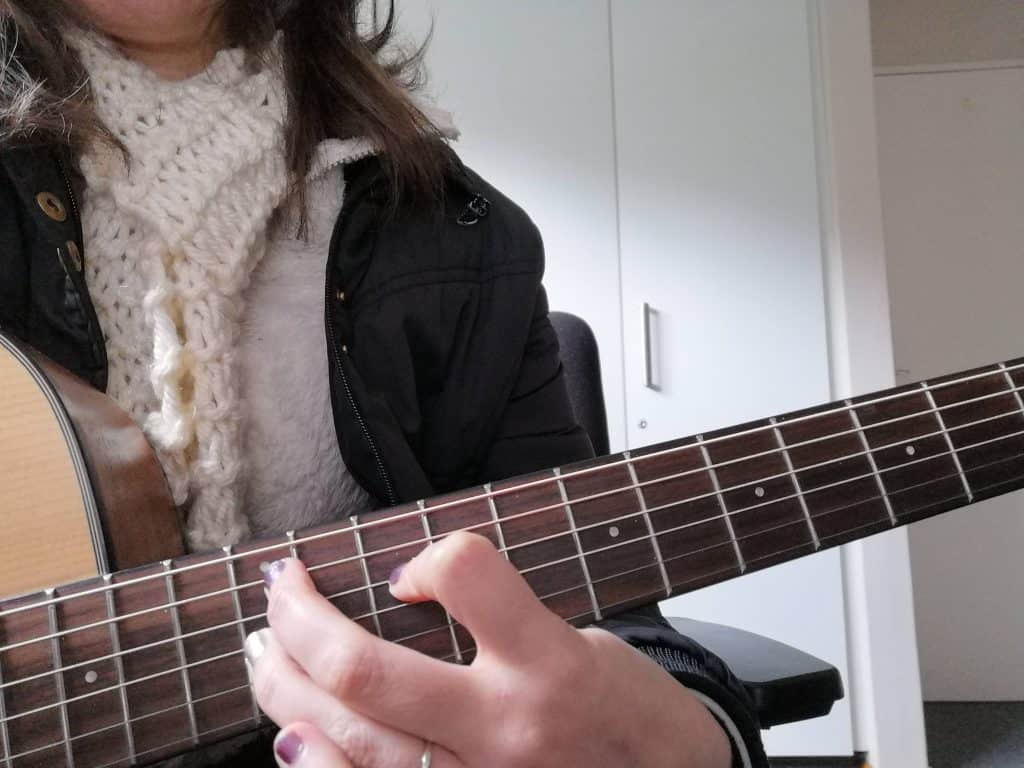 The Medium Difficulty Am7 Chord Variations

These variations are a little more tricky and if you play the barre chords or barre the jazzy variation, you need some strength in your hand too.

The Am7 Jazz Chord

Jazz chords are called that because they have that lovely jazz sound. It does require you to skip some strings, however. When I use this chord, it’s specifically when I want that jazz sound, since it doesn’t really fit in with the other genres in my opinion.

I play it with my fingers rather than a plectrum because I enjoy picking it, and it’s easier that way to skip the 5th and 1st string as is required.

If you prefer to strum it with a plectrum, it just takes some practice to skip the necessary strings. It’s a skill well worth learning, as you can play what sounds like the melody and rhythm by picking out certain strings while strumming. You can also play the bass line along with the rhythm, which still sounds great.

How to Play the Am7 Jazz Chord: 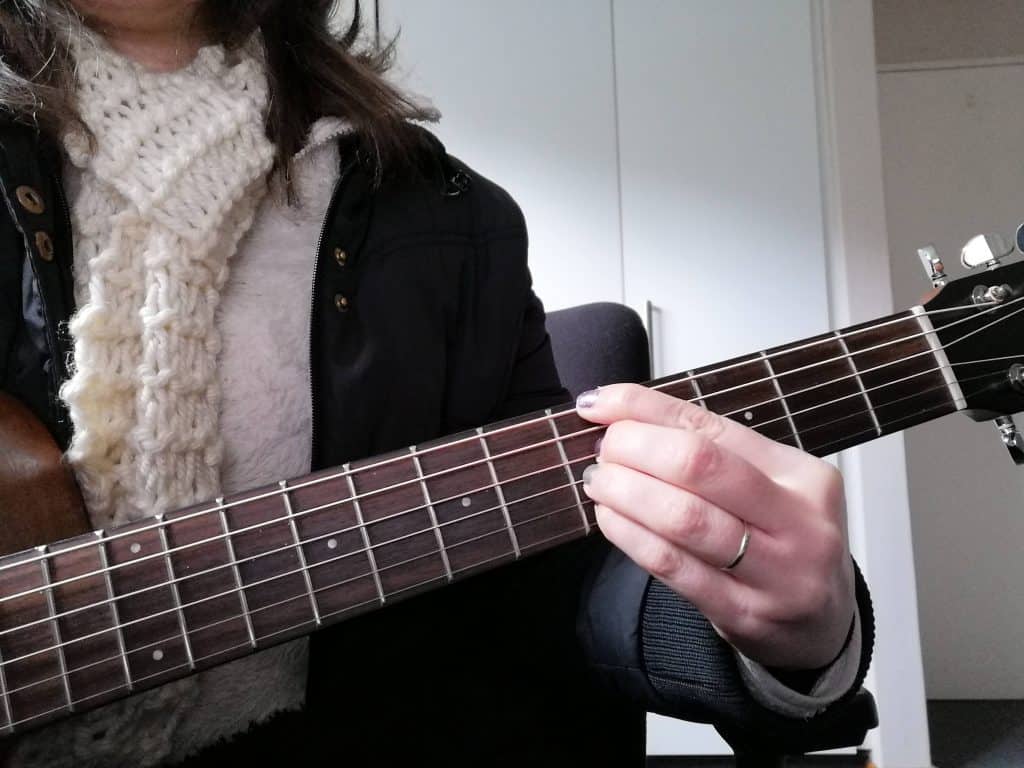 These shell chords are only a little more difficult to play if you prefer to strum. Otherwise, your strumming/picking hand can play the chords without too much difficulty, other than getting used to skipping the correct strings.

How to Play the 173 Am7 Shell Chord Using the Root Note on the E-String (6th string):

1 7 3 refers to the intervals as A G C, in that particular order. 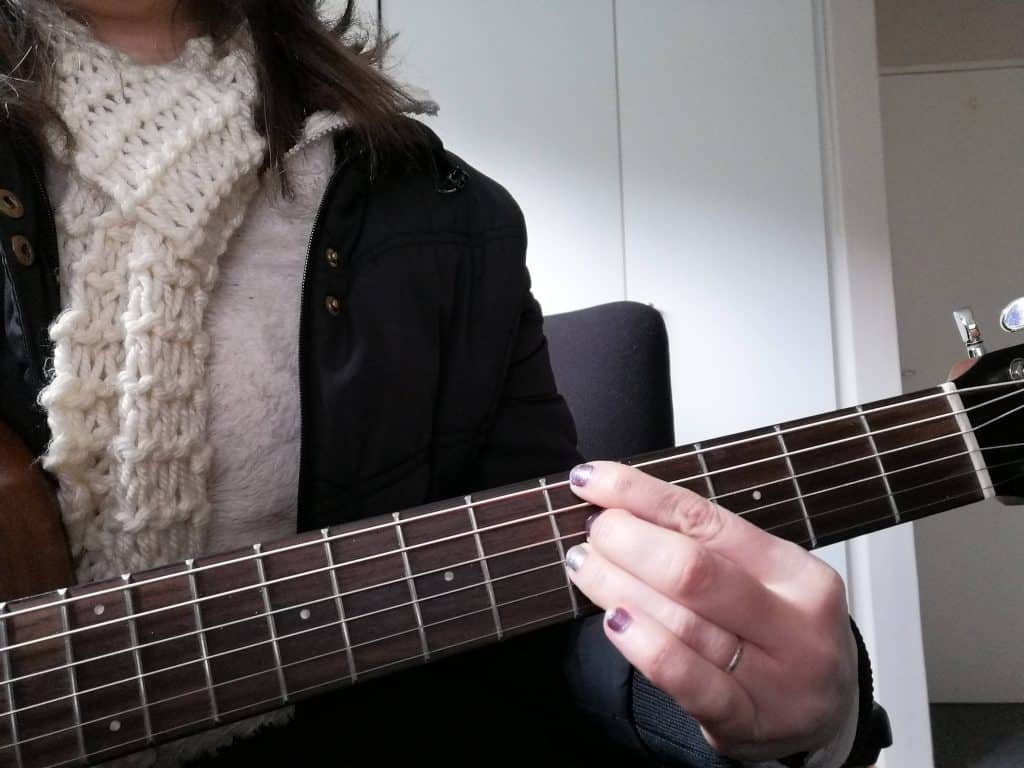 Alternatively, barre the fifth fret, but remember to only play strings 6, 4, and 3. You can also use your middle finger to barre strings 3 and 4.

How to Play the 173 Am7 Shell Chord Using the Root Note on the A-String (5th string): 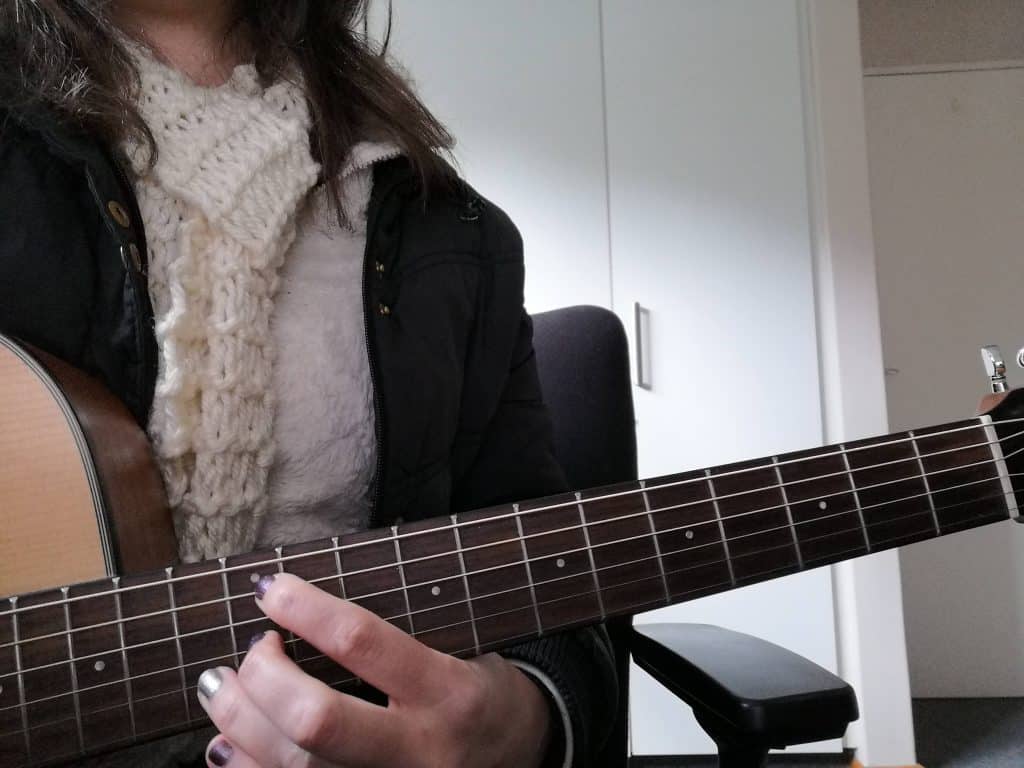 This one is a little higher pitched and might be simpler if you don’t want to skip strings. You only play the bottom four strings.

How to Play The Barred Fifth Fret Am7 Chord: 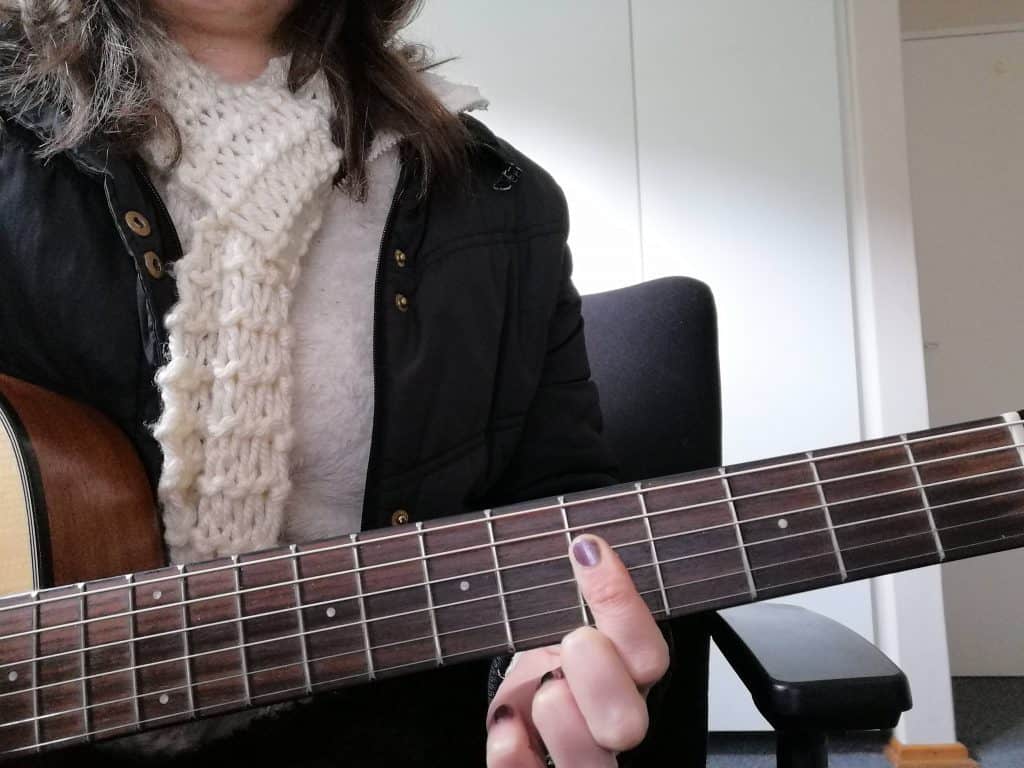 The Other Open Am7 Chord

This is a simplified version of one of the chords you’ll see in the harder section. The key to this one is playing only the bottom four strings, so strings 4-1.

How to Play the Other Open Am7 Chord: 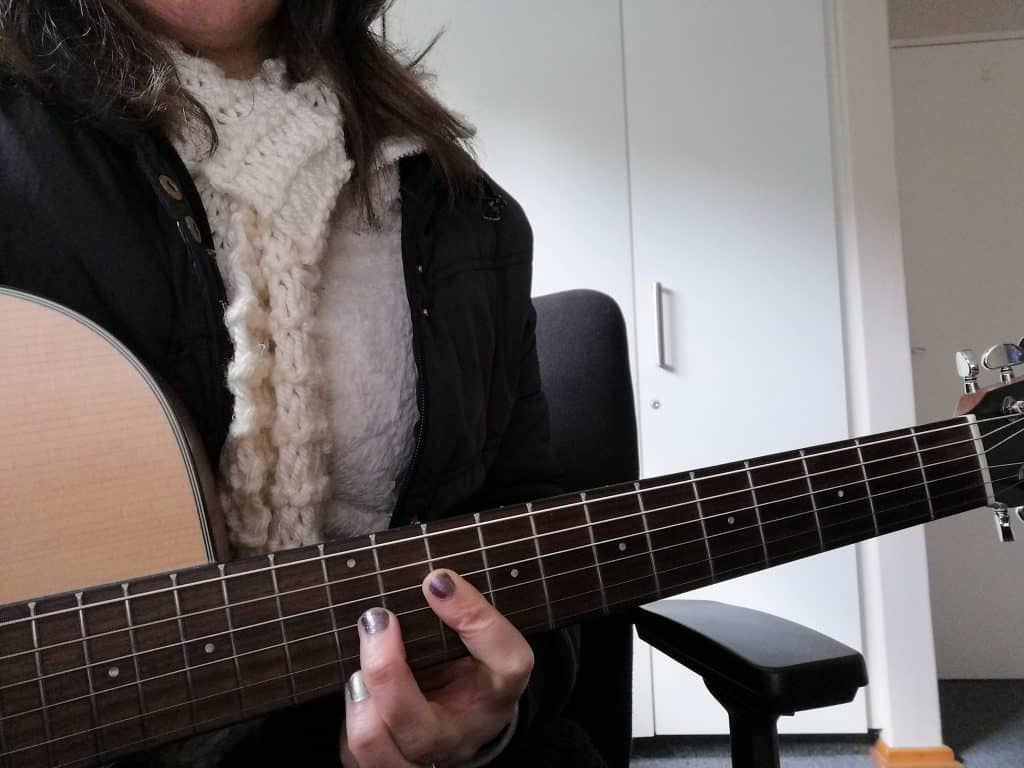 The Other Open Am7 Chord

Alternatively, you can barre the entire tenth fret if that’s easier for you, but just play the bottom four strings.

The Simplified Am7 Barre Chord

Am7 barre chords still have that lovely seventh sound, but the fullness of the barre chord makes it friendlier for playing other genres of music. You strum all the strings with these chords.

How to Play the Simplified Am7 Barre Chord:

The Am7 Barre Chord

This one just has one extra fretted note.

How to Play the Am7 Barre Chord: 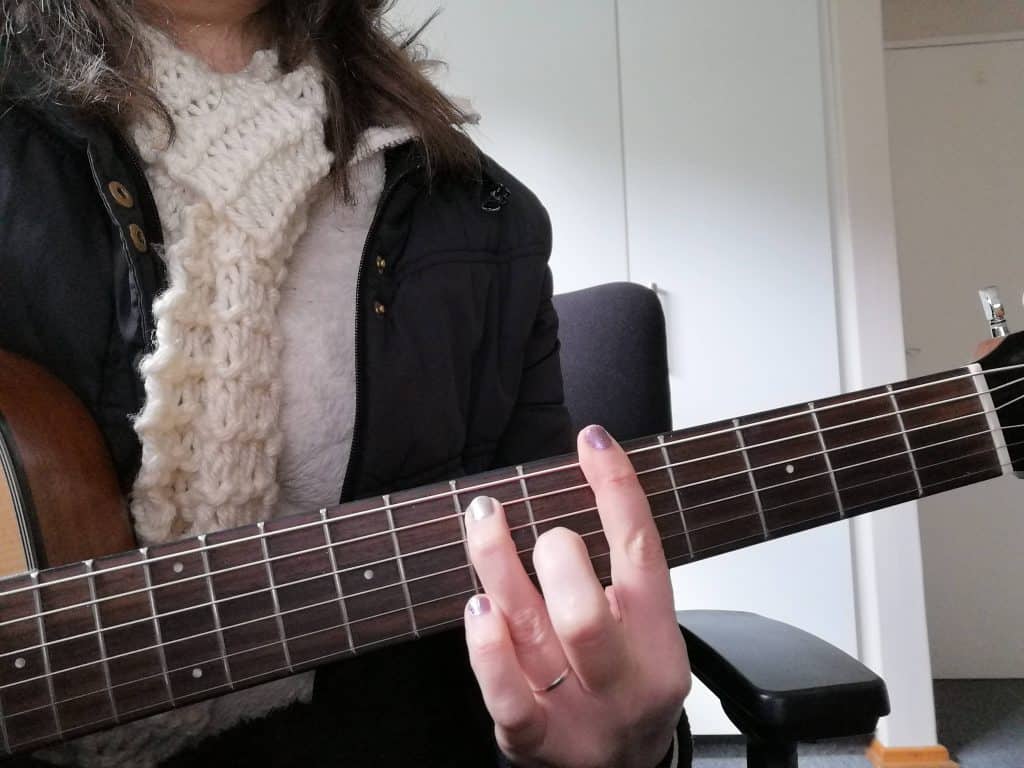 Once you move up in skill level and you expand on creative ways to use chords, perhaps you’ll want to give these a go.

The Harder Open Am7 Chord

In the medium difficulty section, you saw the simplified version of this chord. This version absolutely requires the use of your pinky, and it can be a little tricky to space your fingers just right.

But never fear. With practice, you’ll get the hang of this chord. It’s a higher pitched chord that sounds beautiful. With the fifth string being played in the twelfth fret, it has a little more depth than the simplified version. 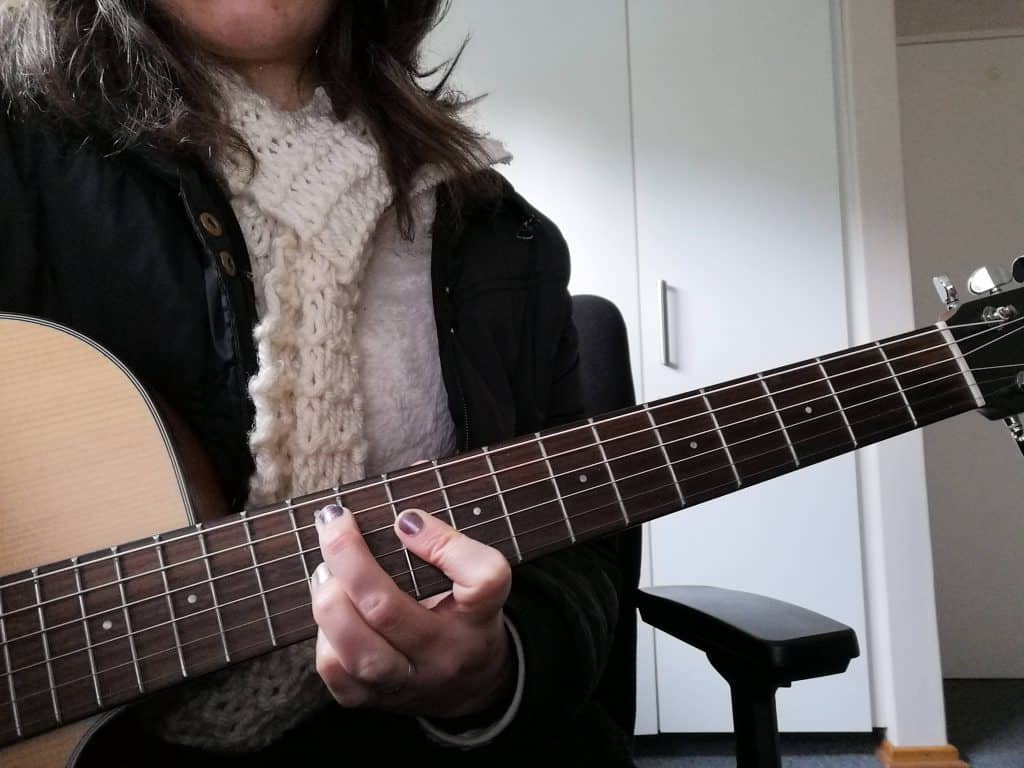 How to Play the Harder Open Am7 Chord:

A Few Easy Am7 Chord Extensions 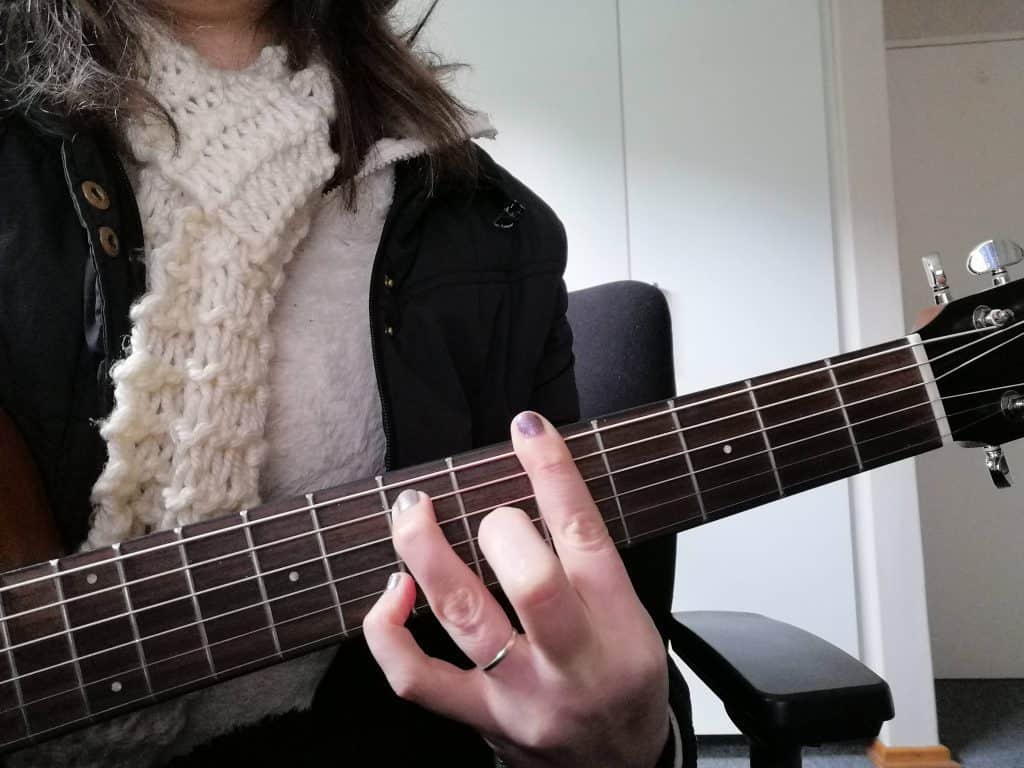 Simply strum all six strings when you play the open Am7 chord. 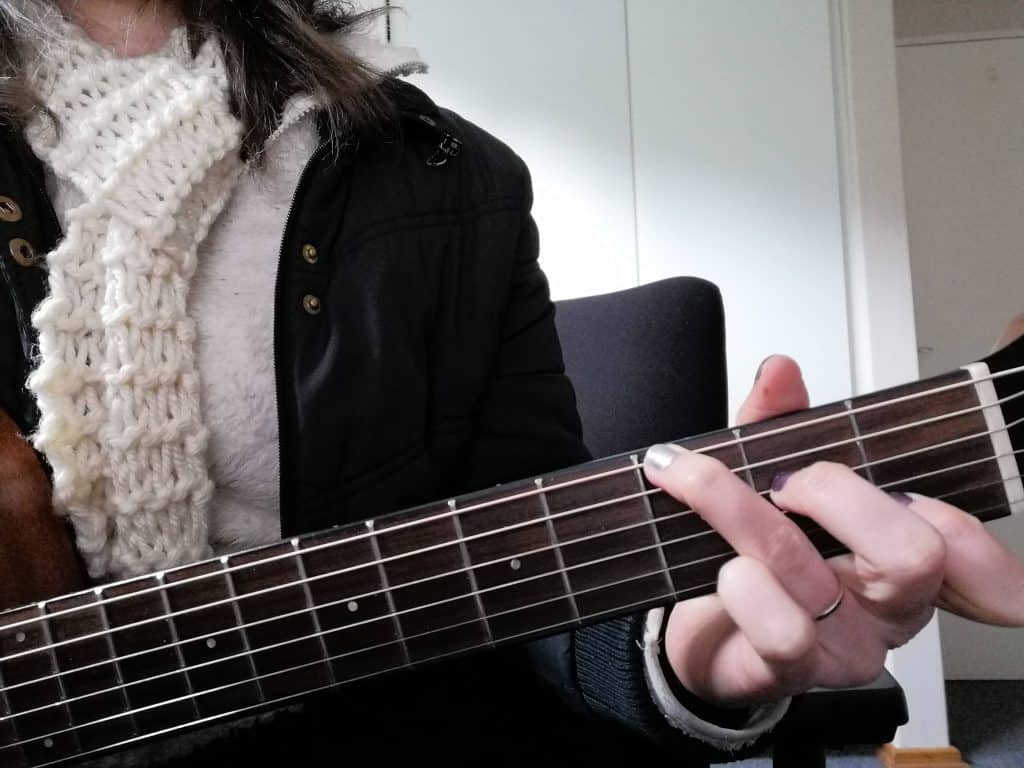 There you have it, many ways to play the Am7 chord in various places to match your preferences and overall chord progressions. Enjoy experimenting and learning which one is your favorite. If some of them seem tricky at first, just keep practicing.

Also, while it’s tempting to go for the harder ones first, just remember that just because a chord is hard and looks cool to play, doesn’t make it necessary.

If you’re strumming or picking a song and the complicated version of Am7 lends itself to what you’re creating, that’s great. But there is nothing wrong with sticking to the simpler versions if you enjoy the sound and those versions work well with your creative vision for your music. 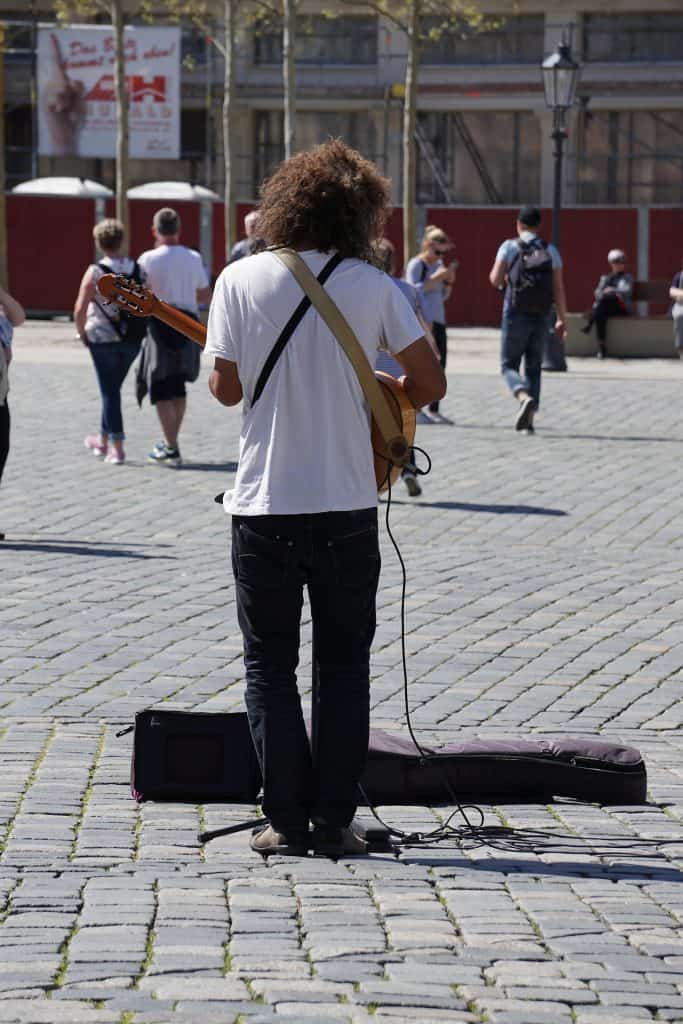