At BeginnerGuitarHQ, we’re constantly trying to figure out ways to teach our readers how to play guitar at the next level. Whether it’s through your guitar tone and timbre, your dexterity or the notes you have access too. Drop D is a common tuning system that many players will be familiar with, and it gives you a lot of flexibility in your playing.

In this important guide, we’ll teach you everything there is to know about the drop D tuning system, and how to achieve it.

If you’re trying to learn what drop D is and how to implement it into your guitar playing, then look no further.

What Is A Tuning?

The first thing to know about Drop D tuning before we get into specifics, is what a tuning system actually is. In short, it’s the note that each of your guitar strings plays if played open (AKA, without pressing down on a fret).

The standard tuning for a guitar is E-A-D-G-B-E. This means your lowest string (string 6) will be playing an E, while the one above that will be sounding the A which is directly above that E, and so on. Most players will use a guitar tuner to make sure each string is perfectly playing the desired note, but tuning by ear is possible too. This requires you to find your low E. This is doable if you have perfect pitch, but typically you’d need to hear an E first, or be happy to possibly tune slightly away from the exact correct pitches. Then you can use the fifth fret of each string that follows to tune the next string up: the 5th fret of the sixth string will sound the ‘A’ needed to tune the fifth string, for example. The only exception to this rule is on the 3rd string, where you’ll need to play fret four to get the sound of the second string.

What Is Drop D?

Drop D is arguably the most commonly used alternate guitar tuning. This is probably for a multitude of reasons. Firstly, it isn’t actually very different to standard tuning (in fact, all but one string is tuned exactly the same). Secondly, it is very easy to achieve, and finally, it makes playing certain things much easier.

Drop D tuning is made up of the notes: D, A, D, G, B, E. The only way this differs from standard tuning is that the sixth string is one step lowered, taking it to a D. The outcome is a very different sound when playing all of the open strings at the same time, as well as an ability to play lower notes than a standard tuning would allow.

How To Tune To Drop D

To get into drop D tuning, you’re only going to have to do one thing: lower the tuning peg of your sixth string by one tone. If you’re using a tuning device, then you’ll need to make sure it knows you’re tuning to a D, and then all you’ll need to do is loosen the string until you reach the sound it’s asking you to hit. If you’re using another instrument to tune to, make sure you remember to play a D, rather than the expected E. Finally, if tuning by ear, you’d have to deviate from the standard ‘fifth fret’ approach, and use the seventh fret of the sixth string to hear the sound of the A on string five.

One of the easiest ways to check if your drop D tuning is going to sound right, is to play the fourth string D and see if it clashes with your open sixth string or not. If it sounds smooth, then you’re playing two D octaves. If they aren’t, then you might need to edit the tuning of one of those strings.

How To Use Drop D

Drop D is a simple tuning, but it can completely change the way you approach guitar playing. There are many ways that drop D can be used.

The first and most obvious way to apply the drop D tuning to your playing is to reach lower notes with it. The only open D note you had available previously was the open fourth string, which also happened to be the lowest D a guitar can naturally play. If you think about it, it isn’t a very low note at all, so if you’re looking to add some bassiness to your sound, then you need to go lower.

With drop D, you have two semitones to play with. Hitting that big open string can create an aggressive, thick sound, but don’t forget you now have access to an extra D#/Eb as well. This means that you don’t have to limit yourself to those annoying Eb chords that are halfway up the neck, you can now play low if you need to.

In many situations, it is the ease of access to power chords that make guitarists use drop D tuning in the first place. The typical approach to playing a power chord is to the find the first note on your lower string, then add the two strings above that, but both two frets higher. So, if you wanted to play an F power chord in standard tuning, you’d hold the first fret of the sixth string, then add the third frets of the fourth and fifth strings, while muting the remaining high notes.

Drop D brings a whole new world of simplicity to the power chord. Not only do you now have access to two previously inaccessible power chords, but you can play them all with just one finger. To play the F power chord we mentioned above, just hold your second finger over the 3rd fret of string six, five and four.

This has a world of benefits. Firstly, it becomes a lot easier to form your chord shape to start with, as it requires just one finger. Secondly, it’s easier to slide your finger up and down the neck than it is to slide an entire power chord shape. Finally, it makes fast playing a treat. If you’re looking to rock your way through a fast, thick riff, the ability to effectively hammer on a sequence of chords with immense speed is very helpful.

The Key Of D

A more specific advantage of drop D comes from the natural tuning it places your guitar in. In standard tuning, each note of an open guitar strum fits into E minor. Now, each note fits into D major. Technically, it already did, but now this is strengthened by the D at the bottom.

An automatic response when playing guitar is to operate in and around E keys, simply because that is where your lowest string takes you. Now that you’re using drop D, your lowest string is a D, and therefore, you can play in D major and D minor with much more ease.

A G chord in drop D

One thing to look out for when you change to a new tuning, however, is the new chord shapes you’re going to have to learn. Obviously, many of the simple chords you got the hang of when you were just starting out in the world of guitar involved that low E string.

The simple way to look at it, is that you’ll just have to move up by two frets if you’re playing a note on the sixth string, but that’s easier said than done. Imagine you’re playing a G major chord, and you’re asked to take that third finger up to the fifth fret? It just wouldn’t work. As such, you’ll have to find ways around this.

Options include: Omitting the sixth string. This is an easy way to avoid having to stretch, but can leave your chords feeling a little empty, especially if you’re specifically in need of that lower bottom note. You could also switch to extended power chords while using drop D. This would mean using the three finger power chord shape, but adding flavour (like sevenths or major thirds) by bringing other fingers into play. This will mean you’d have to learn a few new shapes, though. Finally, if not playing live, you have the option to record your chordal guitar part in a standardly tuned guitar, and then add your drop D melodies/notes over the top of that.

One thing that can’t be forgotten when talking about drop D tuning is its importance to the metal genre. This is mostly because that is where you’ll find it most frequently. Bands like Slipknot and Meshuggah really bring out this grumbling, low, power-chord heavy sound in their music, so it can be used to create a similar sound to them, if that’s what you’re into.

Examples Of Drop D In Use

Drop D is an important alternative tuning and arguably the most well-used aside from standard tuning. It will instantly give your playing a more ‘metal’ sound, but has so many more applications beyond that. It introduces you to a lower register, a totally different way of playing chords and a variety of similar tunings that all have different specifics. 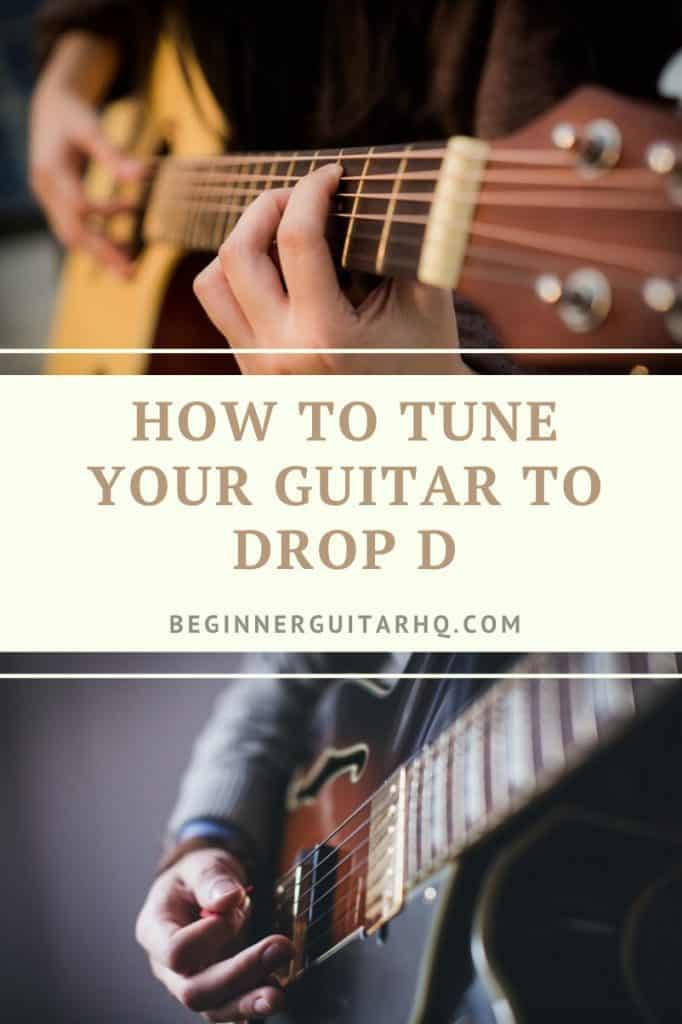