A lot of chords you’ll hear and play are diatonic, meaning they’re mostly going to sound ‘good’. However, eventually you’re going to want to add a bit of interest to what you’re playing by adding some non-diatonic notes into interesting places.

In this important guide, I’ll talk you through the process of adding dissonance to your guitar chords.

If you’re looking for a place to start learning chromatic melodies, then look no further…

Most of our guides here at BeginnerGuitarHQ are based on diatonicism. Whether you’re trying to pick up a grasp of how to play standard triadic chords or learning some beginner melodies to play on guitar, they’ll typically be diatonic to one key. Check out these major chord variations if that is what you’re looking for.

This essentially means that within a scale, you’ll make your chord or melody up using notes that exclusively exist within this scale. For example, a C major scale (C, D, E, F, G, A, B) could create melodies or chords using only notes from this scale and they will be diatonic no matter how they sound. A C major triad, for example, is just as diatonic to the key of C major as a B diminished chord is, because both are made up exclusively of notes from the C major scale.

If you want to get really technical, to be diatonic is to be found within a scale that uses 5 whole steps and 2 half steps with the 2 half steps separated from each other by either 2 or 3 whole steps. This means various modes and the natural minor scale also fall into this category.

In terms of playing chromatic melodies, this is simple. Any note used that lives outside of the scale you’re using is a chromatic note. When playing dissonant (an ‘irregular’ sounding) chords, they might not be chromatic. This makes things a little confusing.

A chord such as the B diminished mentioned above is both diatonic and dissonant due to it being made up of notes from the same scale, but including the dissonant tritone interval. A B minor chord used in the key of C would not be dissonant, but would be chromatic as it borrows an F# from another key.

Below, I’ll talk you through dissonant chords that happen to be diatonic to keys. This is relatively simple to get used to. Then I’ll move onto the use of chromatic chords; these may or may not be dissonant, but will always borrow chromatic notes from non-diatonic keys.

We often associate dissonance to chromaticism, but this doesn’t always need to be the case. You can remain completely in your home key and create some seriously dissonant chords.

In a C major scale, for example, there are 3 types of dissonant intervals available. The major 2nd connects C and D, D and E, F and G, G and A, A and B, so playing any of these notes together will create diatonic dissonance.

Similarly, the even more dissonant minor 2nd exists between E and F as well as C and B. The once illegal tritone (augmented 4th/diminished 5th) is found between F and B. This means you have the option of some extremely dissonant clashes within a diatonic scale.

Think about it: if you pressed down every white note on a piano, it would sound pretty dissonant, but technically it would still all be diatonic to C major. Now just play an E, F, C and B all at once. This gives you a tritone and two minor 2nd clashes in one chord, but it’s still diatonic.

In the example below, I’ll talk you through some diatonic chords which are still full of dissonance. 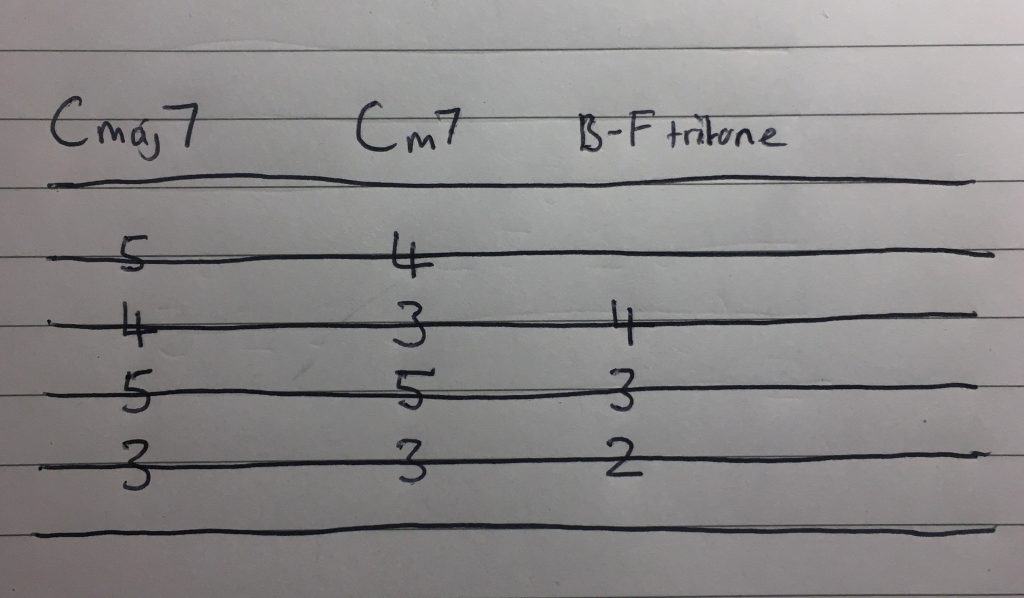 Diatonic dissonance is relatively common in music. We’re able to hear chords such as the maj7 in various pop tracks, because while it has certain dissonances within it, the overall effect remains pleasant. Having said that, things like the maj7 chord are unlikely to be found in a particularly heavy piece of heavy metal, as it simply sounds too ‘nice’.

A Few Examples Of Diatonic Dissonance In Music:

Moving from diatonic dissonance, chromatic dissonance can also add a flair to your chords. Typically, this type of dissonance will be more jarring and unexpected, arguably creating a ‘stronger’ dissonance. This is because not only is the interval used dissonant, but the notes used are unexpected in their new context.

As explained above, you can find dissonance in C major. However, if you allow yourself not only every note from C major, but also every other note, you can create a whole new world of dissonance.

This gives you access to every single major 2nd, every single minor 2nd and every tritone to be combined in any way you want. Pressing down an entire octave of 12 chromatic notes will create one of the most dissonant noises imaginable, while carefully choosing which chromatic notes to add to your harmony can give it an interesting flair.

Below, I’ll talk you through some types of dissonant chords that are (almost) always chromatic. 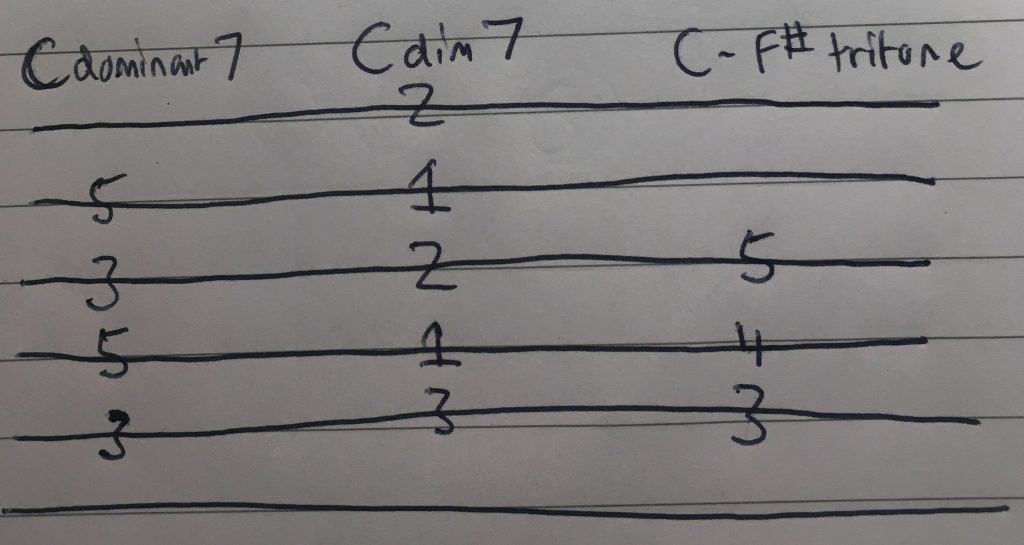 Something to remind you of here is that while this list of chords are always chromatic chords because they include simultaneous notes which don’t appear in the same scales. However, as I mentioned above, the chords which are able to be diatonic can still be chromatic.

Chromatic dissonances are often avoided in chart pop music, as they move away from the pleasant sound most pop artists are going for. For example, you’re rarely going to find anything more than a dominant 7th in the work of Ed Sheeran. Chromatic dissonance is normally reserved for the extended chords of jazz, the grinding aggression of extreme metal and the technical complexity of progressive rock, amongst various other genres.

A Few Examples Of Chromatic Dissonance In Music:

Here is a detailed look at all extended chords

Alternating Between Major And Minor Chords

This is an interesting one, as the use of major chord in place of what would be expected to be minor (and vice versa) is not technically a dissonance. However, the effect can often be dramatic and unexpected, employing a chromatic note to change the tone of chord.

In C major, we’d expect the G chord to be major with a B natural. However, changing this to a Bb would create an unexpected sound which doesn’t fit the key. However, this wouldn’t necessarily be dissonant and can be used to particularly interesting effect.

A particularly common example of major/minor alterations is making chord IV in a pattern minor instead of major (or vice versa). Try brining an Ab into your use of the C major scale and see what I mean. This isn’t technically dissonance when played on its own, but its unexpected nature creates some interesting harmonies to expand your own work.

A Few Examples Of Major/Minor Alterations In Music:

The Use Of Cluster Chords

We’ve looked at a lot of relatively simple dissonances that will fit into many styles, but there are types of dissonance which are rare and particularly grating to hear.

A cluster chord is theoretically a cluster of next door notes combined. This can exist in a diatonic setting, in which you hammer out a mesh of next door notes (at least 3) from one scale. This creates some serious dissonance, but can be increased further by being used chromatically.

Playing 3 or more next door chromatic notes can create an even further level of chromaticism. This would end up so jarring that it is rarely found in popular music, and is more likely to be found for dramatic effect in film score, for example.

A Few Examples Of Cluster Chords In Music:

An interesting thing to note is that without some questionable tuning methods, its essentially impossible to create a chromatic cluster chord on the guitar. Unless you have some seriously impressively long fingers, you’ll struggle to create a true cluster.

If you’re looking for jarring minor 2nd dissonance, try playing the 4th fret of any string at the same time as the open version of the one above it.

You have a lot of dissonance available to you and are able to control it in a variety of ways. You can stick to pleasant sounding diatonic dissonance and give your playing a little interest and flair. You can create chromatic chords which add even more of an edge, and can sound fantastic when employed in the right places. You can even bring intentionally harsh sounding, grating dissonances by combining some seriously angry intervals in your music.

Just make sure you test it all out first- dissonance can sound terrible if not used in the right place. 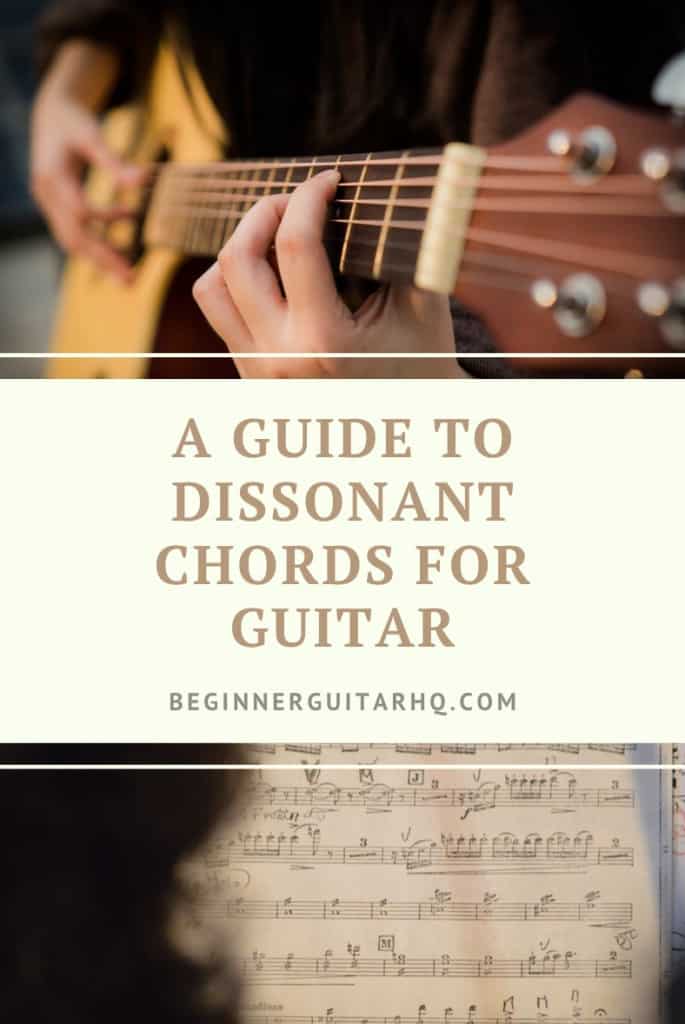