A lot of guitarists get by with no knowledge of music theory or the notes on the guitar and can even play awesome riffs, play fingerstyle pretty well, etc. Nothing wrong with that if it works well for them.

But there may come a point when it can really help you level up. Honestly, in my opinion, if you start writing your own stuff by just doing what sounds good, or do just fine reading tabs and/or playing chords, that’s great.

That said, knowing your instrument well comes with its own benefits. Getting to know the guitar fretboard notes opens a lot of musical doors, especially paired with a bit of music theory. I say this because you’ll see things that you didn’t know were possible, or just get ideas that you hadn’t thought of before.

It does seem like an impossible task looking at all the frets and the strings. But there are actually some simple tips you can use to learn all the notes on the guitar neck.

Notes on the Guitar Neck

Looking at it like this, it might be a little daunting. But there are some easy tips that will take practice, and of course, a little memorization, but soon it will become automatic. The key is consistency.

Not everyone can get to the 20th fret. The neck becomes a thicker as you approach the body of the guitar, especially acoustic guitars. Also, guitars that don’t have a cutaway shape make accessing frets below 15 a mission and if you have smaller hands, likely impossible.

But learn what’s possible on your guitar, even beyond that, and should you ever purchase an electric or cutaway guitar, you can apply your knowledge immediately.

Tips to Get to Know All the Guitar Fretboard Notes

Here are a few different methods. Since we don’t all learn the same way, you can find one that works for you. When you practice, be deliberate. Make sure you go slow and get it right from the start. Because practice makes permanent.

Learn the Fretboard in Sectons

What may be easier for most people is to get to know the notes on the guitar neck in different stages.

If you’ve been at it for a bit, you’ll know you can get away with just knowing the notes and chords that happen in the first five frets. Here you will get all your basics, all the barre chords, and lower voicings at least.

When I read sheet music and play, so not tabs, but actual notes on a staff, I play in these five frets most of the time, especially when I feel lazy. You can get away with playing a lot in that area. This is why these notes are considered the top notes to learn on the guitar.

It might be a bit of a schlep, but you can learn the notes using the spider exercise to tame flying fingers.

You can also use the other techniques below to learn in sections.

Learn a Single Note at a Time in its Various Positions

An octave is eight notes. The first and eighth note are the same note, just a total of eight notes apart. If you play them at the same time (called unison in intervals), you will hear they match, just one is higher than the other.

But as you find the individual notes on the guitar neck you’ll get to know the different octaves. It’s good for ear training and you’ll be able to adjust your playing to which octave you want to play in.

While you can learn gradually at your own pace, taking as long as you need to locate each note, it’s good to work your way up to locating them quickly:

You’ll see that eventually it becomes automatic. You can learn a few notes at a time, or just master the one before moving on. Whatever is easier for you.

Scales can be boring, but they are fundamental to learning any instrument well. If it gets tedious, challenge yourself by using the metronome much like with the previous tip. Again, it will be helpful to say each note that you play out loud, but if not, at least think about each note that you are playing.

I’m going to use shape one of the CAGED system for major scales. This shape is moveable, so all you need to do to change the key is go to the root note you want on the 6th (lower E string). To determine the sharps or flats (keys with sharps is more popular on the guitar, but learn both), is pretty simple.

You can use the pattern method if you are familiar with how all the semitones (half notes) work: 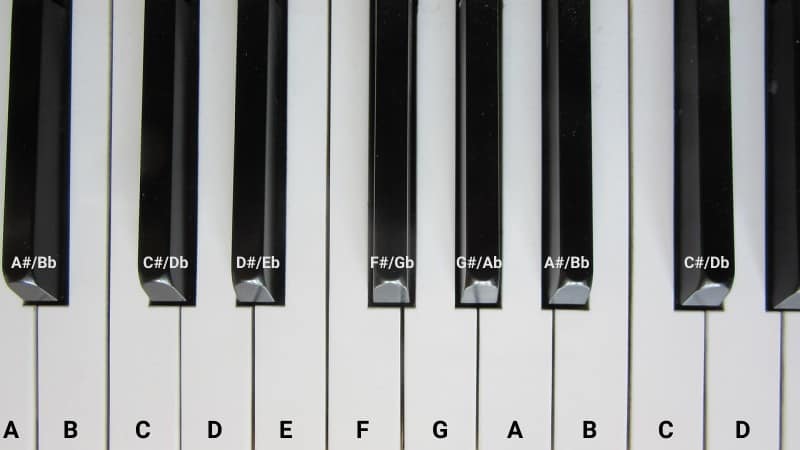 You can see it pretty easily on the guitar, but if you’re like me, you’ll find it easier looking at a piano. It’s nice and linear with the colors clearly separating semitones and whole notes. For a linear view on the guitar, just go down one string.

So if we follow the pattern using the G major scale, and G is a pretty popular key on the guitar, here’s what you end up with:

Alternatively, use the circle of fifths:

Sharps and flats always follow the same pattern. This allows people who read sheet music to quickly and easily determine the key.

Yes, when put like this, E does have a sharp and so does B. But that’s because there’s already an F# and a C#, and if you put the sharp in the designated spot for C, you’re indicating a C#. The same goes for Cb and Fb.

The position on the circle is like the numbers on a clock. The 12 o’clock position indicates 0 sharps and flats. But as you can see with G, it’s at 1 o’clock indicating 1 sharp (F#). The flat side has it in the mirror image for example, Bb is at the 10 o’clock, or in mirror image, 2 o’clock position, so it has 2 flats (Bb and Eb).

You can also see if you really want to get to know where your sharps are, F# major is a good scale, as is B and C# major. C# only consists of sharps.

Just to be clear, sharps and flats are the same notes, e.g. C# and Db. But in terms of keys in music, you don’t use them interchangeably. The key of F will only ever have a Bb, never an A#, although they are the same thing technically.

The Scale Pattern on the Guitar: 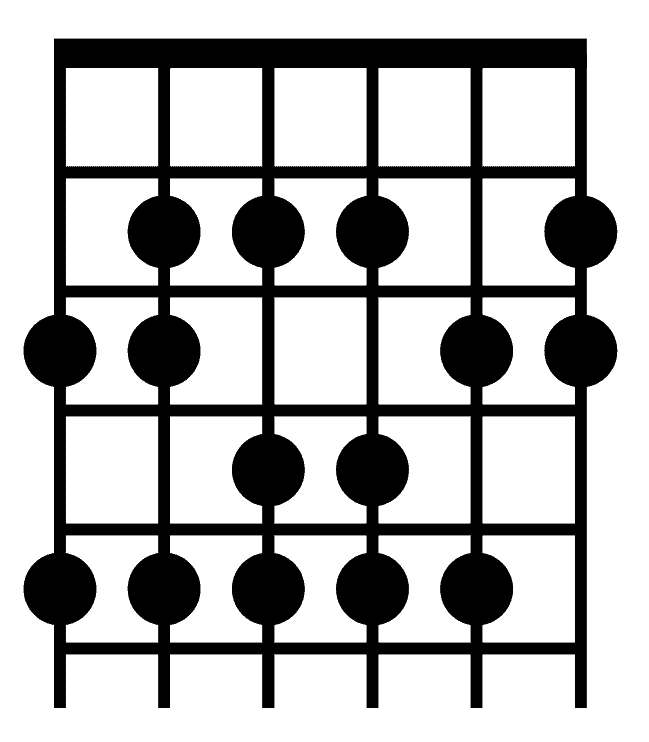 Move to the root note in the 5th fret and you get the A major scale, down two frets in the 7th fret, B major. One fret down from that is C major in the 8th fret, etc.

You can do the same thing with minor scales such as the harmonic minor. Try the natural D minor scale which like the major scale, uses CAGED shapes which are moveable.

You might find it more fun to incorporate arpeggios into your practice. They’re certainly a lot more musical sounding. This isn’t licence to just skip the scales, but you don’t have to stick to just playing scales.

A basic arpeggio is pretty easy to play. Take the major scale shape from above, and just play every second note. You’ll be playing chords. Again, you can say the notes while you play them.

This is a great exercise for finding the notes in other octaves. If you decide you want to play an octave up, no problem. It’s also a way of getting to know where the notes are to the point of being automatic, kind of like a different way of doing the single note at a time exercise.

Look at this diagram again. With the Es that are on the 5th and 6th strings, you just need to skip a fret and a string to get the octave. With the Es on the 3rd and 4th strings, you skip two frets and one string to get the octave. This will take you all the way to the notes on the 2nd string. Pretty handy. This pattern is the same for all the notes on those strings.

With the Es on string 2 to string 1, it’s quite a big stretch. You need some super stretchy long fingers to get the octaves from there. The octaves from string 1 to string 2 are only slightly easier, requiring a five fret stretch. But at least you have the majority of the strings covered.

Harmonies create intricacy that produces beautiful tones in music. There are some pretty awesome solos out there and fingerstyle songs that make use of double stopping, the technique of playing two notes at a time. While you can learn this like a parrot just by getting used to where to place your fingers within the scale shape, I recommend that you get to know the notes you’re playing.

For example, to play a third, you simply skip a fret between each. Here’s what it looks like with the G major scale: 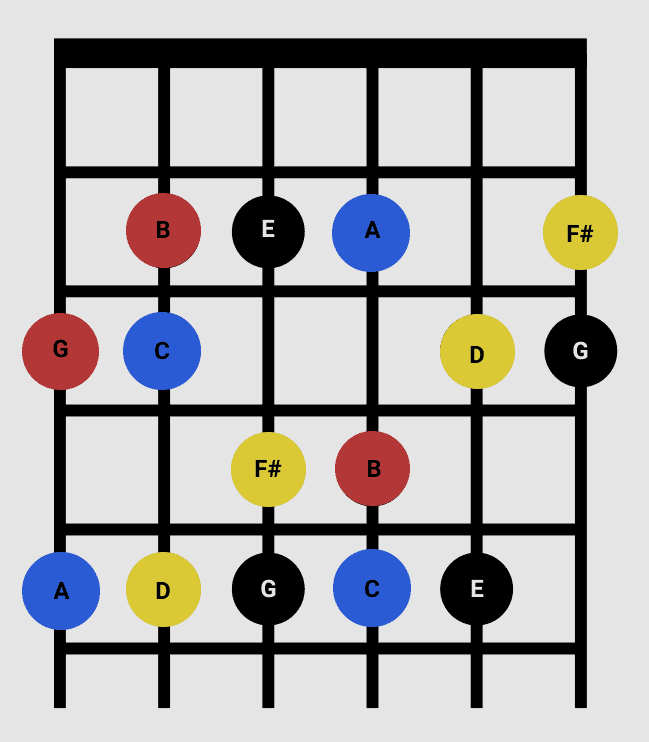 For fourths, skip two frets, for fifths, skip 3 frets, etc. You’ll train your ears to recognize intervals and you’ll find which are your favorite harmonies to use when making riffs. Again, saying the notes out loud or at least thinking about them as you play them will be helpful.

If you’re interested in classical guitar using sheet music, here are the notes in relation to the treble clef on the staff for the first five frets including the open strings: 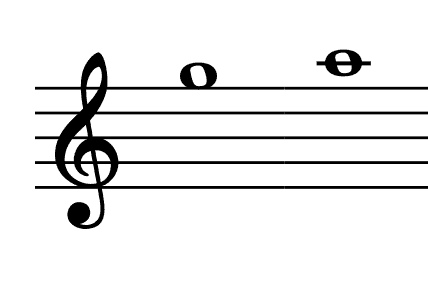 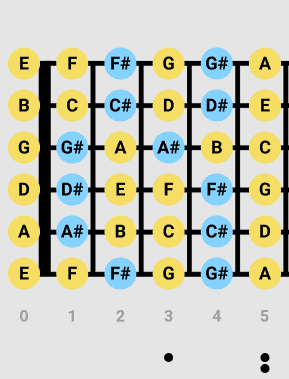 None of the sharps are included as the notes on the staff would either have sharps next to the notes indicating sharps, or they would be written in the key signature. Also, generally, aside from adding some flavor here and there, music will usually not have the sharp and natural (not sharp or flat) mix. It really is just used to add that little something to make it sound interesting or exotic. A good example is the ending of a blues riff.

Remember I told you that you will find the same note in multiple places on the guitar, so much of the fretboard is covered by the notes on the staff. There are a few exceptions, like the lowest E. Those lines underneath and above the staff are called ledger lines.

If you go higher in pitch than is indicated on this staff, you will see the notes written on ledger lines. This would definitely be the case if you were playing all the notes on the high E string. The ledger lines act as the lines of the staff essentially. But it’s all linearly written out on the staff making it much easier.

On the treble clef, you can remember the notes on the lines that make up the staff by remember Every Good Boy Deserves Fruit (this F sitting on the top of the staff).

The spaces spell out FACE.

As you can see, it’s not nearly as hard as it seems to get to know all the guitar fretboard notes. It just takes time and consistent practice. After a while, it becomes automatic. It’s also pretty awesome that the exercises you use to remember the notes are transferable, making you a better guitarist as you go along.

Don’t give up if you get frustrated. Find what works for you. While it may not be fun immediately (although making a game out of it with a metronome can help), it will pay off in the end. 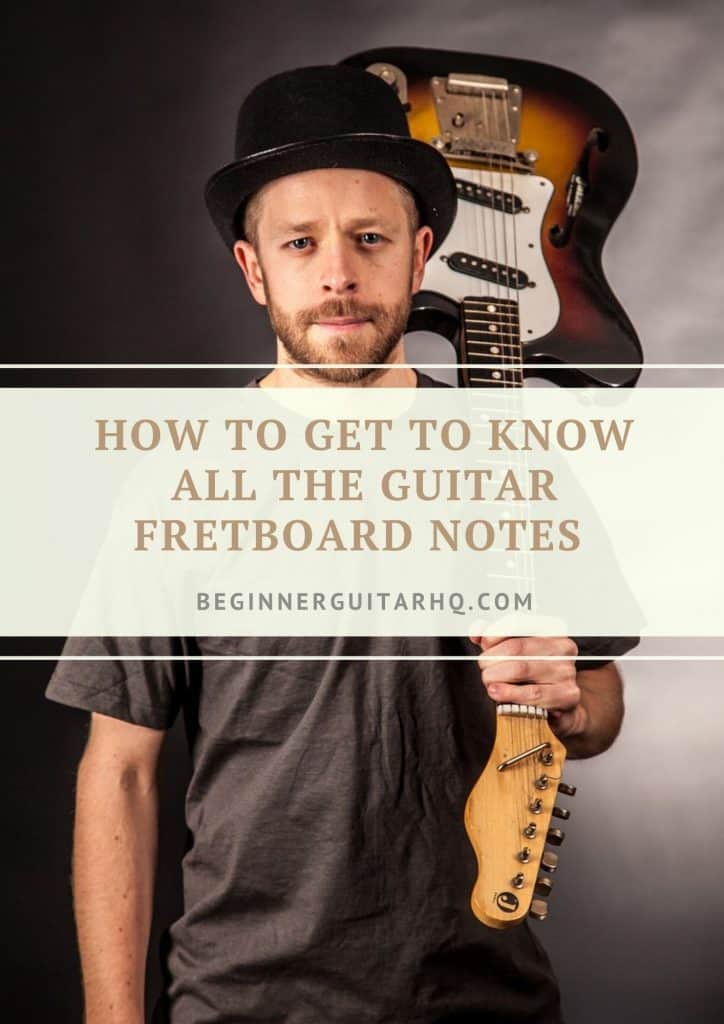