Scales are considered one of the most fundamental concepts in music. They are known to have a varied use. Most songs as we know them are based on the key system. Not to mention that scales can be a good way to start understanding music theory. Most guitar teachers emphasize learning them.

Hundreds of scales exist in the music world. Due to this scales can become quite overwhelming for the beginners. If you are just starting to explore this concept then you might have already started learning major, minor or pentatonic scales. In this article we will take a look at how a D minor scale is built and how to play it on guitar fretboard.

But just knowing a scale and playing it up and down can be unproductive and downright boring after some time. So we will also take a look at how you can have fun and challenge yourself while practicing the scales. We will also take a look at the chords that you can use for writing your own music using this scale. I would also like to suggest that you try to create your own exercises based on the exercises given here. Learn more about how to practice guitar scales. So let’s dive in!

Guitar music theory in general, is based on 12 notes. The distance between any two notes is called an interval. All the scales are built using a combination of these intervals. These intervals are what gives a scale its characteristic feel. Generally, a minor scale is said to have a sad, melancholic feel. Minor scales have been explored and used in a vast variety of genres and songs.

Now let’s take a look at how to build a natural, harmonic and melodic minor scale.

To build a D natural minor scale, we take this formula and apply it to the D root note. This will give us the following notes:

On a single guitar string D, it would look like:

To build a D harmonic minor scale, we take this formula and apply it to the D root note. This will give us the following notes:

On a single guitar string D, it would look like:

To build a D melodic minor scale, we take this formula and apply it to the D root note. This will give us the following notes:

On a single guitar string, it would look like:

How to play D minor Scale on guitar

There are many ways by which you can play a scale on the guitar. Guitar being an instrument with patterns, you will find many patterns for the D minor scale. In this article we will focus on Natural D minor Scale.

To get a feel for the intervals, you should first try to play a scale on a single string. Doing this will help you memorize the notes of the scale and also familiarise you with the intervals and placement of root notes on the fretboard.

Taking the one string scale shape given above, try to construct the Natural D minor scale on other strings.

Box shapes can be a really good place to practice the scale. You can practice this scale shape to build your speed and it will also help you see the patterns on the fretboard. We will take a look at some exercises to help you internalise the scale in a later section. A major advantage of learning these shapes is that you can transpose it to any fret. That is if you play the same shape starting on a different fret it will give your natural minor scales with other root notes.

Once you are familiar with the scale and can play it up and down in the box shape, you can start to connect the shapes. Being stuck in a box can hinder your growth as a guitar player. So ideally an advanced guitarist should be able to play the scale all over the fretboard. But that is the end goal. What you can do to give yourself a chance to get out of the scale box is to connect various shapes of the scale. This can be very frustrating at the beginning and you will play wrong notes often. But remember that frustration means that you are learning something. Take things slow and you will be able to play like you always imagined.

Different notes of the scale are given different names based on their position as well as the function. So in a D minor scale, the scale degrees are:

All scales have chords that can be formed using only the notes of the chosen scale. In the key of D minor, we can build a total of 7 triad chords, each chord based on a different note of the scale. These are called diatonic chords. To build these chords we will consider the scale in ascending order. After that we will select a root note on which the chord will be built. Now in the final step, we will choose two other notes. Omit a note after the root and select the one after that. Then again omit a note and select the one after that. This will give us our triad for any selected note of the scale.

For example, if you want to build a triad on the note A(dominant or simply 5th note of the scale) then in the scale of D minor (D-E-F-G-A-Bb-C-D), select note A, omit note Bb, select note C, omit the D and finally select E. This gives us the A minor triad.

Tip: The sequence of these types of chords is the same for all natural minor scales. That is, a chord built on the first degree of any natural minor scale will be a minor chord. This will be similar for all other scale degrees. It is an important fact that will give you the chords in any given minor scale instantly. 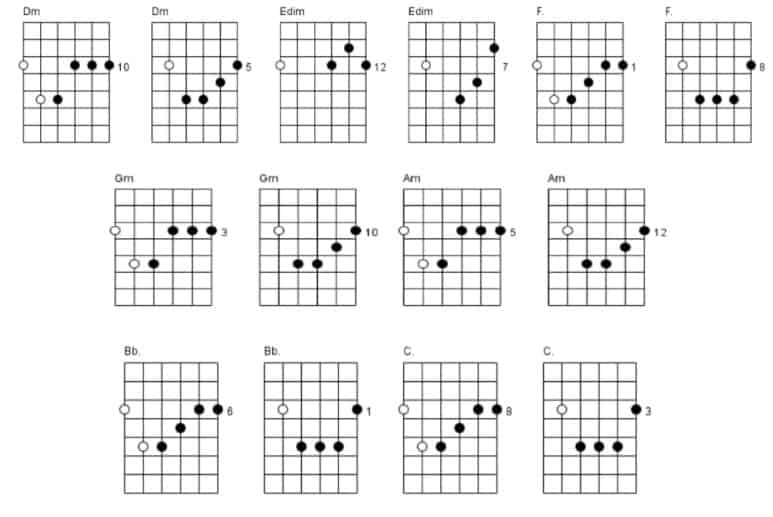 There are different types of seventh chords that vary slightly from one another.

In the key of D minor, we can use following seventh chords 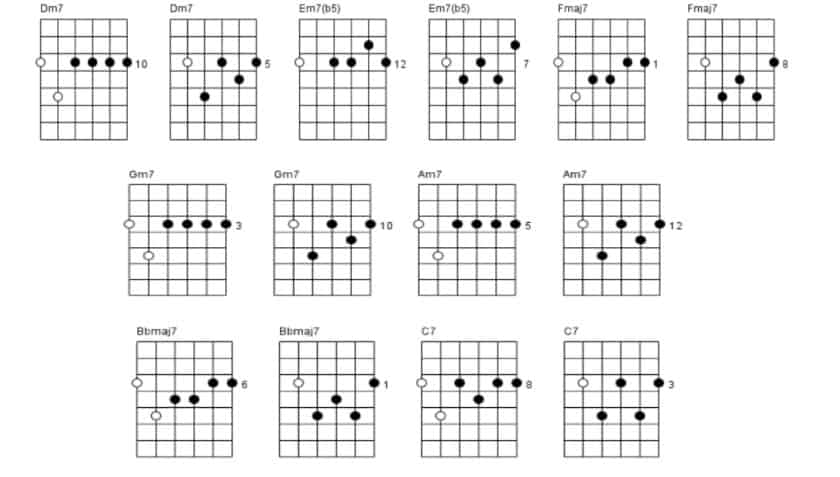 Some of my favourite extended and suspended chords that I use most frequently in D minor scale are:

We will use the common symbols used for each chord.

This is one of the most used chord progressions in popular music. The chords used will be Dm-Gm-Am

Chords used will be Dm-Bb-C-F

Fear of the Dark by Iron maiden uses this chord progression.

Some exercises to internalise the D minor scale

It is important to practice your scale in more than just ascending and descending note patterns. First reason for this is that playing just up and down in order will never give you a solid grasp of the scale and second is that it simply just gets boring after some time. Therefore, we need to dive in and practice in different patterns.

I will definitely suggest you to first practice the scale in order and get yourself comfortable. Also you should practice with a metronome and keep track of the speed that you are comfortable with.

Here are some exercises that you can practice to not only learn the D minor scale but internalise it and use it effectively. Feel free to create variations of these patterns and apply them to the different shapes of D minor scale.

Try to create your own process for learning scales. Create your own exercises by taking the above exercises as a reference. Also remember that by trying to write your own music in a given scale is the best way to explore that feel of the scale. So keep practicing and most importantly, Have Fun!