The E minor pentatonic scale, like all the other pentatonic scales, is very versatile. It’s very common in blues music, but you’ll find it in just about any genre. The word pentatonic, denotes five notes. That’s all a pentatonic scale is. You may be wondering how a scale with only five notes can be that great. Wouldn’t it get boring?

Practicing this will help you to get to know the notes on the neck of the guitar, since it’s important to know where the root note is. You’ll also develop more fluidity as you get better at it, and soon you’ll be comfortable playing all over the neck.

Another cool thing about the minor pentatonic scale is that you can play it over major chords too, as long as none of the notes clash and cause dissonance. This makes it an easy way to start soloing, even over major keys, provided they gel together. We’ll get into all that as we go along.

Here are the tabs and the diagrams as you would play them on the neck of the guitar. The root, E, is marked in red in the diagrams. You play the notes using your index and middle fingers or, in the case where the notes span four frets, your pinky. Get to know these shapes well. With practice, you’ll improve your speed and dexterity. 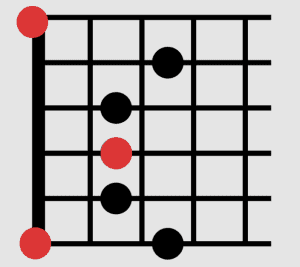 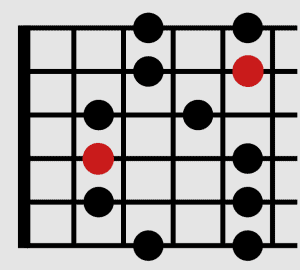 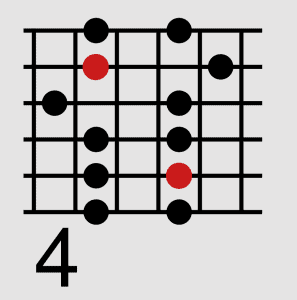 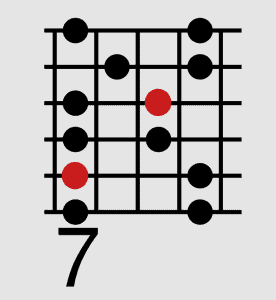 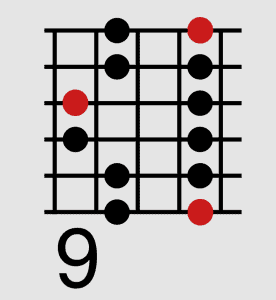 How to Use the E Minor Pentatonic Scale to Solo

It can be a little confusing when you think of going from playing the scale to actually soloing, especially since there’s only five notes. But really it’s as simple as letting your creativity run free.

Typically, I’ll use a backing track and let my creative juices flow.

Which Keys to Play the E Minor Pentatonic Scale Over

The five notes in the E minor pentatonic scale are: E G A B D. These notes are all present in the natural E minor scale. But because you aren’t using all the notes from the scale, just these five, you can play this scale over major keys as well as minor keys.

You can play over the following keys:

If you want to introduce some tension by including dissonant notes, bend the notes until they go up a whole or semitone as needed.

You don’t need to use these effects on every note, although there are some techniques where you can use them on at least most of the notes. But you can create cool solos using these techniques as accents to spice up your solos.

This is where you simply pull your finger off the string to play two notes. They’re often combined with hammer-ons. You don’t pull hard sideways, just slightly to get it to sound. You may need more effort on an acoustic guitar than an electric if you’re only using pull-offs and hammer-ons to play notes. Pull offs are pretty common and can help you to play faster as you often need to do in really fast metal licks.

Hammer-ons are where you use place your finger/s a little more forcefully to produce a note without picking or plucking the string. This technique is common during strumming chords to add that extra little something, and it will help your solos too. As with pull offs, when used in conjunction with them, you can often play notes faster than you could perhaps pick them.

You can try it out using the exercise I gave you for the pull off, but instead, pick the note the high E string, fifth fret and then hammer on with your ring finger onto the seventh fret on the same string.

Bending is a great technique to introduce into your solos when you’re ready, along with vibrato to really make your guitar sing. You can use your other fingers to help you bend the string if it doesn’t interfere with the note you need to bend and you don’t need them to do any other things while you bend the note.

If you struggle to bend the strings, even after much practice by which your fingers should strengthen, you may need a lower gauge of strings.

You can produce vibrato with a whammy bar or a vibrato pedal, but most people just use their fingers by quickly wiggling their fingers or using their wrists to push or pull the strings. You don’t need to bend the string very far, just enough to get a vibrato effect.

Double stopping is the technique of playing two notes at once. This creates harmonies that give a little complexity to solos in a beautiful way. Heck, throw in a power chord or two as well, it sounds great!

While a bunch of really fast triplets or quickly shredding a few notes on the electric sounds great over rock and metal music, this isn’t all there is to solos. You’ll hear that in most styles of rock and metal that there is variation in the note lengths.

This is true of a variety of genres. After all, a solo is a melody. A catchy, memorable melody that adds that little something to songs.

When you start practicing by using the scale, you won’t believe what a difference it makes to play those ascending or descending notes in varying lengths. While you do want to branch out to varying the actual notes so that you aren’t always just going up or down, you can learn to phrase your ascending and descending notes in a way that sounds awesome.

So do some long notes, do some short and some medium length notes too. But be sure to make it sound musical.

Linking to the other patterns will give you more variety in terms of pitch and tone. Get creative and see what you like. It can be difficult at first to get the hang of traveling all over the neck of the guitar, but with practice you’ll be moving around like a pro.

Whatever key you’re in, play the root note during your solos, this will make the solo feel like it’s home. E would be the root for E minor, G for G major, A for A minor, etc.

Not trying to make a pun here, but you if you play hammer-ons, pull-offs, vary your note lengths, and throw in a few bends and some vibrato, but you’re doing it all out of rhythm, it just sounds sloppy. Let the drums be your guide, or tap along to the rhythm guitar or piano if there are no drums.

But if you aren’t using a backing track or playing with other people, consider getting a metronome like Sound Brenner which is available on Android and Apple. This is going to really help you as you speed up your solos if that’s your thing too. Because again, you can shred as fast as you want, but if the notes are inconsistent, you’ll end up sounding sloppy instead of awesome.

Jamming to a Backing Track

If you don’t have a friend to play with or a loop pedal at your disposal, a backing track is one of the best tools you can use to have fun while practicing your scales and creating solos out of them. Use the tips above to craft your solos. And remember, don’t stress if you hit a wrong note, just learn from it and carry of jamming.

Here are a few backing tracks in E minor that you can try:

For those of you who want a slow rock ballad:

Postrock for a heavier feel:

You can find backing tracks to your liking and in the key you prefer on YouTube, Spotify, and even some websites offer backing tracks for free or to buy.

If you need some inspiration to start or get out of the rut of doing the same things over and over, playing licks from songs you enjoy or trying these out if they’re new to you, could be just what you need.

This lick looks boring, but it’s meant to be played really fast. The notes between the slurs are to be pulled off and hammered on. So the V means to pick upward and that is where you’ll start. While that might seem a little weird, but it’s meant to help with speed and is a technique that a lot of people use when having to play so fast.

This lick goes well over country music. You don’t need to be Speedy Gonzalez with this one. It’s a pretty simple lick with a few pull-offs to make it sound a little more interesting.

You can play around with this one according to the backing track or music you’re playing with. It’s pretty short, so don’t be afraid to add to it.

This lick is good over blues songs. In this one you get to try out some bends. You don’t need to play this very fast, just match the tempo of the music you’re playing to.

You can find more guitar licks to practice and give you inspiration.

So now you’ve seen how you can do some cool things with the minor pentatonic scale. With E minor you’re in luck in that it covers one of the most popular guitar keys, G. So you’ll find plenty of songs to play it over. And although it seems so simplistic, you can take it where your imagination and creativity leads.

Play around with different speeds and techniques and see what you can come up with. Whether you play acoustic or electric, you can play some really awesome solos or incorporate licks into your rhythm playing for a little flare.

Practice slowly in the beginning. Proper practice makes perfect, if you practice in a sloppy manner, that is what you’ll sound like. Practice everything properly, and with time, you’ll sound like a pro. Above all just have fun. Music is expression. Make that guitar sing. 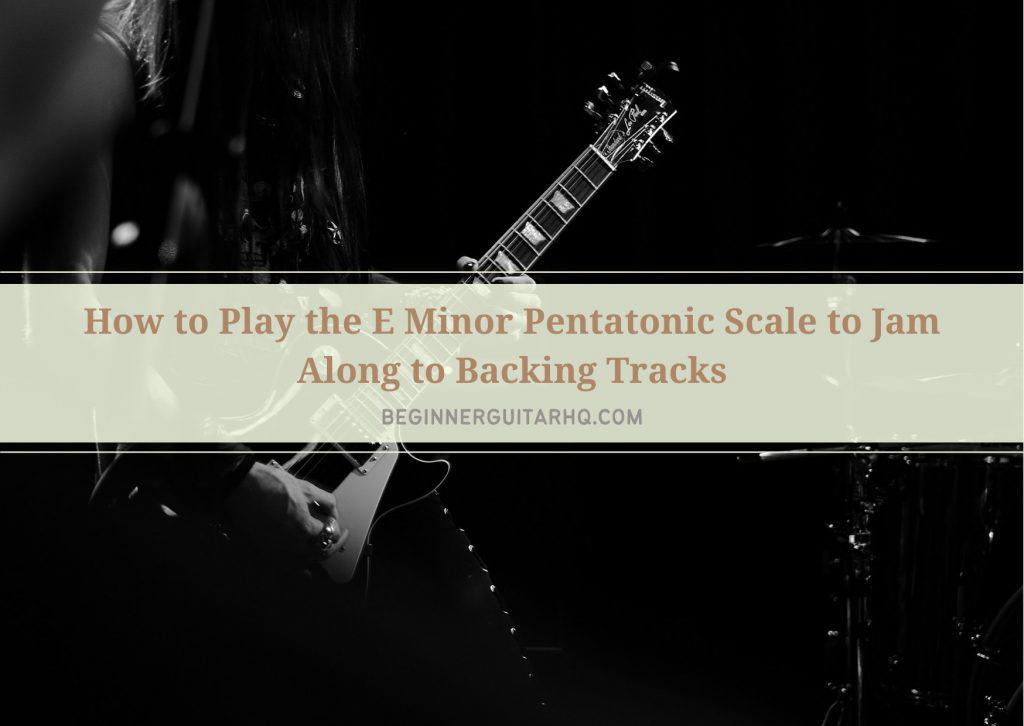