In this guide we present most popular guitar scales tabs you can use as inspiration. Scales are basically a sequence of notes that sound good together. Notes in a scale are arranged in order of their fundamental frequencies. Any scale begins with the root note which is also after which the scale is named. For example, The A major scale is built on A as the root note.

The distance between any two notes is called an interval and any scale is composed of different types of these intervals. The interval called an octave is the point where the scale starts repeating itself. This leads to formation of patterns on the guitar fretboard.

Scales also tend to have an emotion associated with it. Like a major scale is generally associated with happiness and a minor scale with sadness. These are of course subjective and scales can portray a range of emotions to various people. Learn more about guitar keys. 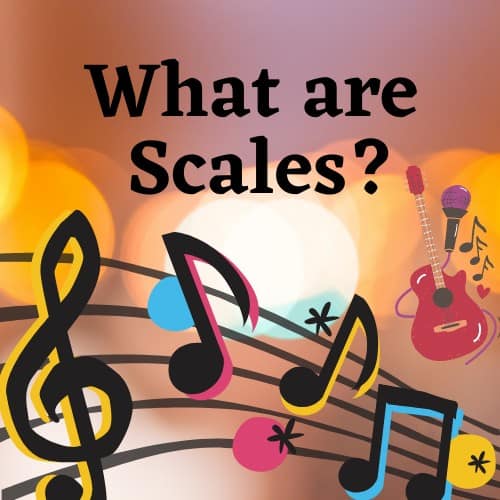 The two of the most used scales in popular music genres are the major and the minor scales. These two scales consist of 7 notes each. Another popular scale that has been used widely, in genres like Rock Music, is the pentatonic scale. Like the name suggests, this scale consists of 5 notes. The blues scale is used mostly in, well, Blues Music.There are also a lot of scales that are used in Jazz music. For example, Diminished Scales, Harmonic minor scales, Whole tone scale and many more.

Apart from these scales there are also hundreds if not thousands of other scales used in world music. For example, there are Japanese Scales, Chinese Scales and Indian Scales that can consist of 4 to 6 notes and these may also have different notes in ascending and descending order. There are also modal scales derived from the Major and Minor scales.

So all in all, this topic is very vast and can be overwhelming for beginners. But don’t worry as you don’t have to learn all of these scales. If your goal is improvisation or songwriting having a variety of scales in your arsenal will definitely help. But if you try to ingest all the information at once then you will definitely get confused. 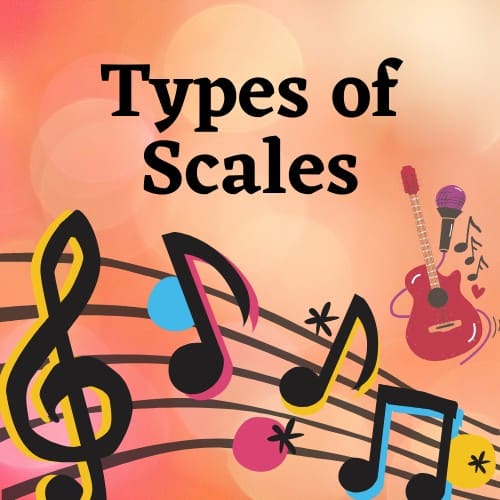 How to use this Article

Keep in mind that you do not have to memorize them all at once. To get the most out of this, you should study the scales one by one and try to implement them into your playing. Once you are comfortable with the scale, then move on to the next scale.

A good exercise for you can be to write a short solo or a song that uses the particular scale to capture it for your scale arsenal and then moving on to the next one. Also try to capture the emotion that these scales invoke inside you and build your song or solo around that emotion and not just around the emotion that is mentioned in its description. Get more fun guitar exercises to become a better guitar player.

Have fun with these not so common scales!

Are you looking for a dreamy vibe? This scale can be your solution. With the sub-dominant (Fourth scale degree of major scale) raised by half step, it makes the interval an augmented fourth. This formation of tritone (the so-called forbidden interval) with the tonic or the root note of the scale is what gives this scale its dreamy character.

This scale has been used across the world since ancient times. It has been widely used across different cultures and is one of the most inspirational scales for me personally. Learn more about Lydian mode.

Songs that use Lydian Scale:

Tip: To bring out the most out of this scale try to focus on Major I and Major II chords in the harmony. For Example- In the scale of C lydian, use C and D chords in majority and try to minimize the use of the other chords.

Are you in the mood to write something dark? This scale can be perfect for you. It is the 5th mode of the harmonic minor scale. It uses a natural 3rd in place of flattened third used in the phrygian mode. Wanna learn more about Phrygian mode? This change gives it a completely exotic vibe and it can be used to write really dark music.

It has been used in metal music for years. It has also been used in genres like K-Pop, Flamenco, Indian Classical, etc. Its use in Hebrew prayers shows the kind of diverse genres you can write in.

Songs that use Phrygian Dominant Scale:

Indian Classical music has a system called the Raga system which is a complete study on its own. This system has many scales with each scale having their own rules to bring out particular characteristics or emotions out of it. There are many pentatonic scales available in this system but we will be looking at the scale called Raga Bhoopali or Raga Bhoop for short.

Traditionally this scale is rendered in the evening and with many other rules about its rendition. But we will just take a look at the scale notes. This scale is different from the classic major and minor pentatonic scales used in werstern music and can be used with a variety of feels.

Songs that use Indian Pentatonic Scale:

Tip: Try to focus on the third note and the root note of the scale with a mild emphasis on the fifth note to bring out more emotions out of this scale.

This scale has its origin in Japan as the name suggests. It is also referred to as the ‘Eastern Pentatonic Scale’. It has been built for the tuning of Koto but it translates beautifully on the guitar. It may have been used traditionally as a monophonic scale with a tonic drone as the harmony.

It has been used in many genres like Metal, Rock, and Jazz. The emphasis is on the half step/semitone intervals hence giving it a dark vibe. This scale has been exploited vastly by the legendary metal guitarist Marty Friedmann.

This scale portrays the feel of Chinese Music very well. It can feel very soothing to the ear and can be used to create atmospheric vibes or meditation type music.

It can also be used for Jazz improvisations. Its use is not limited to these genres though. You can try to build a solo on it to give your song an exotic feel or just to change up things for a better feel.

Whole tone scale is a symmetrical scale and a weird scale for that matter. It is used extensively to portray a dreamy or a flashback kind of sound. It sounds very vague and mysterious and also can be said to give a contradictory vibe. You can either use it in the whole song or use it in some parts to create variation.

For harmony you can use the augmented chords and they will fit right in this misfit scale. You can also use normal chord extensions like 9th so that the listener has some sense of recognition and is not lost completely or getting bored by your song.

It can be transposed only once as it is symmetric and transposing it more than that will give you the same notes! Dive deep into the whole tone scale.

Songs that use Whole Tone Scale:

Neapolitan scale has its origins in the city of Naples, Italy. The Neapolitan minor scale can be thought of as the Harmonic minor scale with a flattened second. This scale has a lot of dissonance which can be used to our advantage for writing songs with a exotic vibe.

For harmony you can use the augmented chords with 3rd, 5th and 7th notes of the scale as root notes (these will give you the same chord but with an inversion). This chord can be also thought of as the Am maj7 chord. You can also use other major and minor chords in conjunction with it to build a beautiful harmony.

Diminished scale is also known as the whole-half scale owing to the fact that it is constructed with alternating Whole-half intervals. It is an octatonic scale. It is a symmetric scale and is repeated after every three semitones. Therefore the C diminished scale uses the same notes as D#, F#, and A diminished scales. This also means that there are really only three unique diminished scales.

The symmetry in the scale makes it easier to navigate on the fretboard. The harmony can definitely include lots of diminished chords. You can also try to borrow Some chords from other scales or use this scale only in certain parts of the song to spice it up.

Originating in the land of pyramids, this scale can provide you with lots of inspiration for licks and riffs. Many scales are named as Egyptian scales and here we will take a look at one specific scale that is pentatonic.

This scale can be called different names so don’t get too caught up in the nomenclature and pick up your guitar and start jamming.

For harmony you can use Csus2, C5(power chord), F5(power chord) and mix and match with other chords to create exotic sounding chord progressions.

This is another guitar scale with middle eastern origin and feel. In Indian Classical music, this scale corresponds to Raga Lalit. It gives kind of serious vibe because of the chromaticism and the extensive use of half steps.

Give this scale a try and you can definitely get some good licks and solos and riffs out of it.

Exotic scales can be fun to fiddle around with. They are less explored than the major, minor and western pentatonic scales and therefore hold a lot of potential in songwriting. These scales can bring out some of the most intense emotions a human mind can experience.

Learn to play these scales all over the guitar fretboard and not just in the box shape that is given in these articles. Experiment a lot and you will definitely find inspiration for songwriting and creating some gems in the coming future.

Good Luck and have fun! 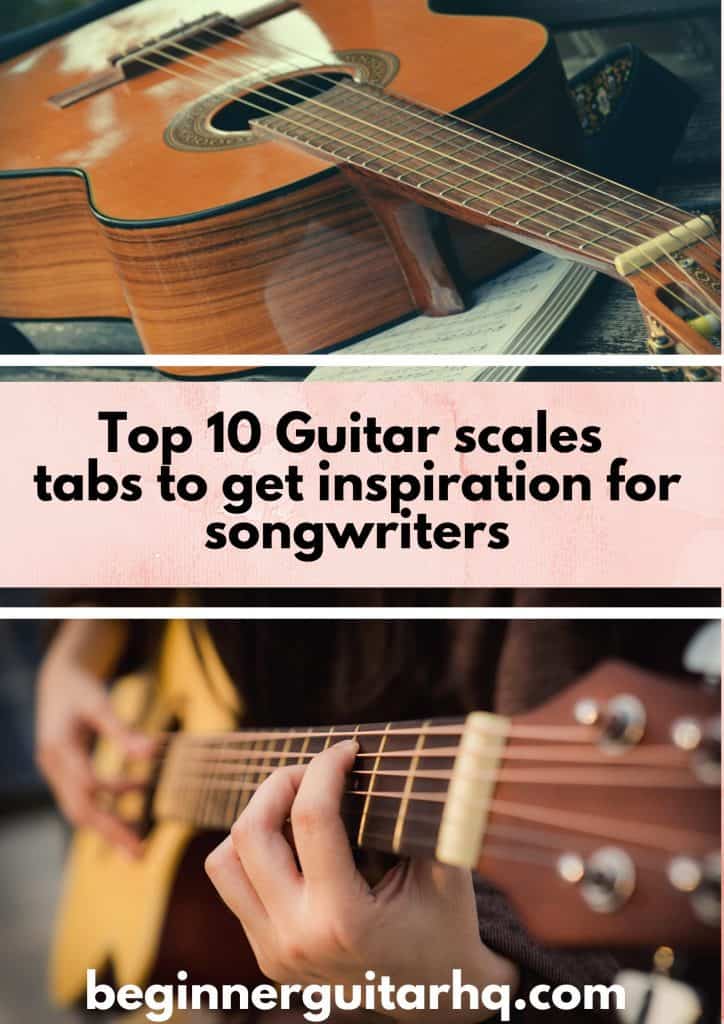