In this article we will explore some most commonly used shapes for E minor scale. But before that it is necessary to learn the basics of how a minor scale is built so that you can create your own shapes in the future to save a whole lot of time. Also there is a section at the end where we will learn to use harmonies in the E minor scale so that you get complete knowledge about how to incorporate this scale into your songs.

What is a scale? A simple answer to that question is that a scale is a sequence of notes which when played together, evoke particular emotions in the listener. These emotions are subjective but generally speaking, major scales are considered to sound happy whereas minor scales are considered to sound sad or melancholic. And guess what? These are not the only types of scales. There are hundreds of scales all over the world of music but major scales, minor scales, pentatonic scales and blues scales are the most commonly used ones.

Playing a scale is not difficult, neither is learning one. The real story begins when you start to explore the use of the scale. On guitar many scale shapes are transposable which means that there are fixed patterns for each scale. These shapes can be shifted to any fret giving the scale for that specific root note. Therefore once you learn certain shapes of major and minor scales, you can just shift these to different frets and you have a whole repertoire under your fingers.

Music theory can be scary sometimes but this is the best tool you can have under your belt. Once you learn certain basics, you will be surprised at how useful this tool is. And it is not as difficult as it sounds. So let’s take a look at how a scale is built.

This can be applied to any root note to build a minor scale. Hence by learning just one formula, you are getting the ability to remember 12 different minor scales. Isn’t it amazing?

There is also another way to remember this formula which uses the number of steps required for going from one note to the other note of the scale. It uses two terms that are “whole step” and “half step” that correspond to two semitones and one semitone respectively. Therefore, if you start on a root note say for example D, then a whole step would mean that the next note will be E whereas a half step would mean that the the next note will be D#.

Out of these three types of minor scales, the natural minor and harmonic minor use the same notes while ascending and descending. But the melodic minor is a peculiar scale that uses a different set of notes while ascending and descending. While ascending this scale uses notes that are similar to a major scale only with a flattened 3rd note whereas while descending, it uses the notes of a natural minor scale. This will become clear as you go through the melodic minor section of this article.

Finally it is time to build our Em scales note by note:

To build a E natural minor scale, we take this formula and apply it to the E root note. This will give us the following notes:

On a single guitar string E, it would look like:

To build an E harmonic minor scale, we take this formula and apply it to the E root note. This will give us the following notes:

On a single guitar string E, it would look like:

To build an E melodic minor scale while ascending, we take this formula and apply it to the E root note. But keep in mind that while descending, you will have to use the notes of natural minor scale. This will give us the following notes:

On a single guitar string, it would look like:

Box Shapes Em scale:
Box shapes are really important for understanding and practicing a scale. These shapes can be used to memorize a scale as well as it can be used to build up speed. As these shapes are easy, they work very well for beginners. Learning these shapes is hugely advantageous as they can be transposed to any fret. Therefore, by learning one shape, you are literally learning 12 scales.

I hope that I have convinced you by now that you should start with box shapes right after learning the single string shape. So let’s take a look at som ebox shapes that you can use to practice.

The next logical step of learning scales is obviously learning to play a scale all over the fretboard. If you can play a scale on the complete fretboard, your playing will definitely become more versatile and easy flowing. It will help you to write better solos that do not seem to be stuck in the box.

But this is a step that will require a lot of effort from your side. You have to go about it in an organized way so as to not get overwhelmed by the sheer number of possibilities. So I will give you a few diagrams that you can use as a starting point to connect the different scale shapes that you learnt in the above section.

Scale degrees are the names given to the notes in a scale. These names are based on the position of the note within the scale. Knowing the scale degrees is very important to communicate your ideas efficiently with fellow musicians. It also helps to learn different chords that can be used within a particular scale. In an Em scale the scale degrees are as follows:

Out of these scale degrees, the tonic, the subdominant and the dominant notes provide the most stability to the scale whereas other notes work to add the colour to it. The tonic, subdominant and dominant are generally used to land the piece that is being played to make the musical phrases conclusive. Using these notes in the right proportions is what makes a piece of music more desirable.

Diatonic chords are the chords that are built using only the notes of the scales. No note of the chord should be outside the scale for it to be diatonic. This is an important concept as diatonic chords will sound good in the harmony of whatever music you are playing.

So to get a feel for this we will look at the diatonic chords of the E minor scale. In this scale, seven triads can be built using seven notes of the Em scale as the root note. Each one of these triads can be classified into major, minor or diminished chords.

Take a look at the table that summarizes this: 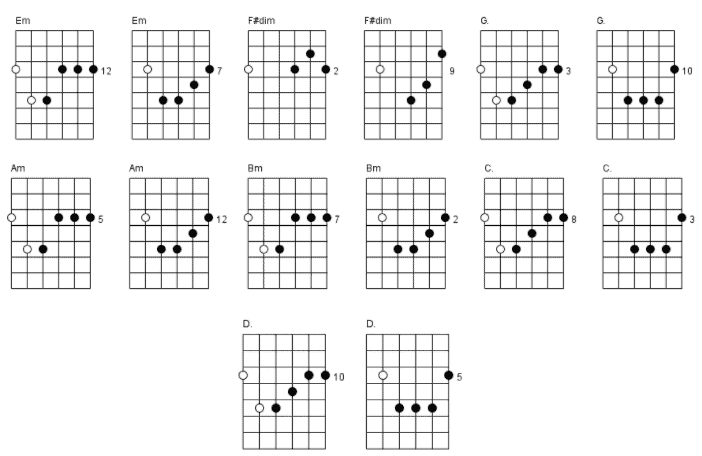 Some commonly used seventh chords are as follows:

Here is a list of chords that you can use within the E minor scale: 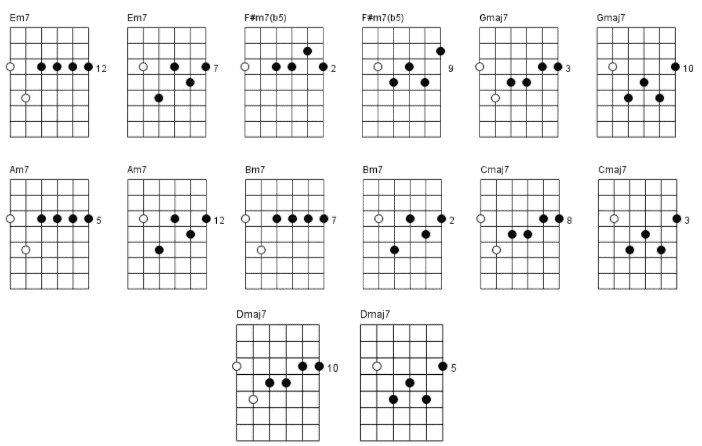 Extended and suspended chords are these colourful chords and generally sound beautiful on their own. Incorporating these chords into your chord progressions can spice up your composition a great deal and make your song sound very sophisticated. These chords can bring in complex emotions that a major or minor chord may sometimes lack. Extended chords can be of many types. The seventh chords are also a type of extended chords. Except these, there can be add9, add11, add13, maj9, min9 and many more.

Some of my favourite extended and suspended chords that I use most frequently in E minor scale are:

This is one of the most used chord progressions in popular music.

The chords used will be: Em-Am-Bm

.The chords used will be: Em-C-D-G

The chords used will be: D-Am-Em-Bm

Some exercises to internalise the E minor scale

In earlier sections we learnt different shapes in which the Em scale can be played. We also saw how to connect those shapes. But practicing a scale up and down is seldom useful and quite frankly, it can be downright boring. So we need to spice it up so that we can internalise the scale as well as learn to effectively incorporate it in our playing.

There are innumerable exercises that you can play and it all depends on how different you are willing to think. To give you a push in the direction of creating your own exercises, here are a few examples that you can use as inspiration. 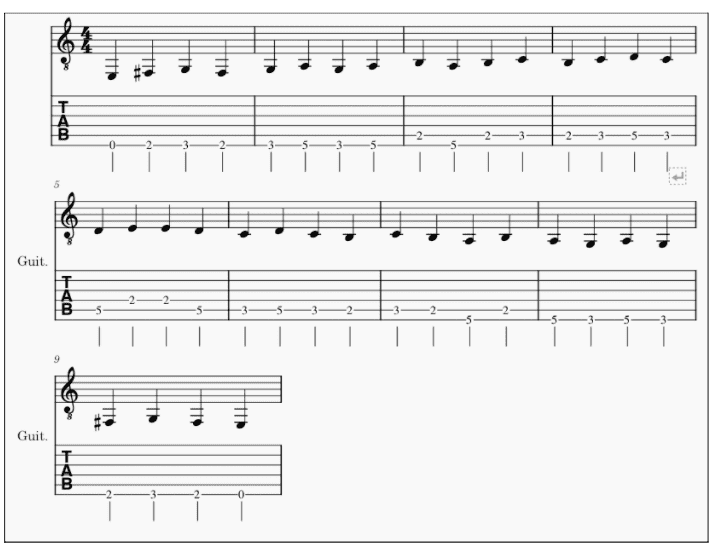 It is important to have fun while playing guitar and doing it as a chore will suck out all the fun. So remember that although learning scales is important for any guitar player, it does not need to be boring or daunting. You should look at scales as a tool and you should try and incorporate it into your playing using your own creativity. If you can have fun with this scale then you can master it and once you have mastered a scale, you can even break the rules and go out of the scale to bring in some interesting notes or chords. So the whole fretboard is your playground and you are limited only by your imagination. So leave behind all inhibitions and start your adventure! 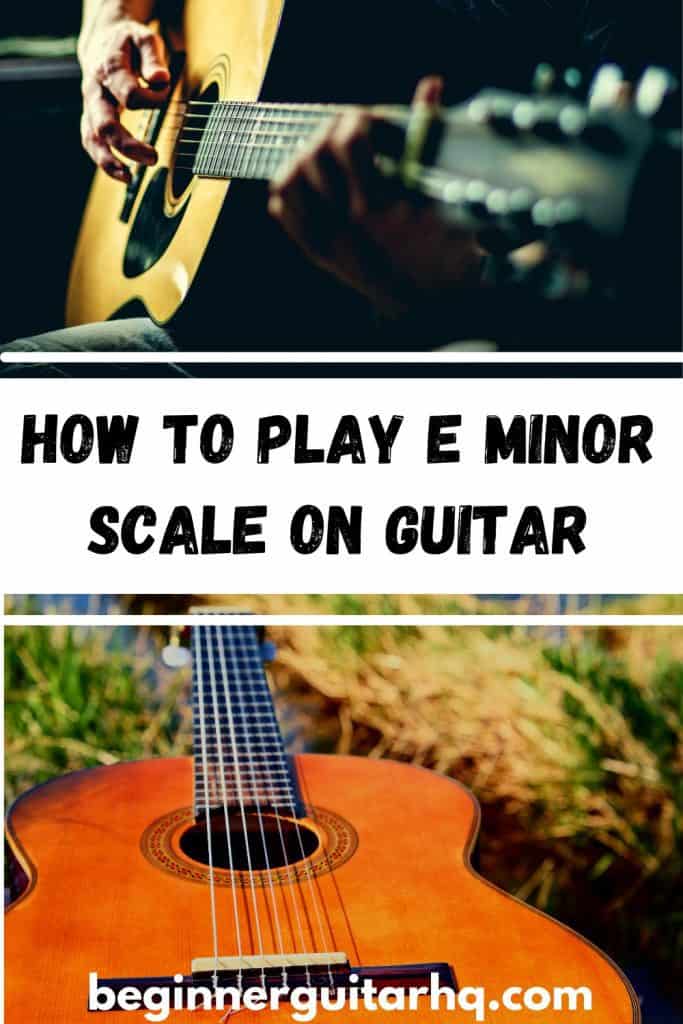