When you first start learning how to play guitar, you’re usually told to keep your nails short.

For many players, this isn’t a big deal. But what if you work as a manicurist? Or what if having nice hands is essential for your look? Does this mean that you should give up?

Of course not! There’s lots of ways to play guitar that sound just fine (or even better) with long nails. 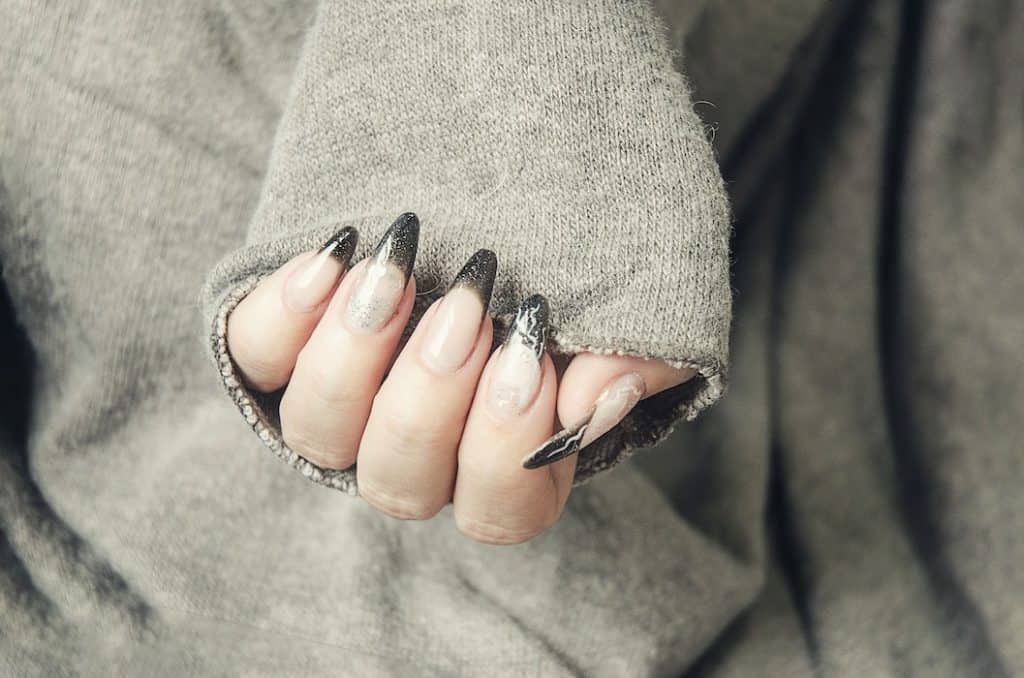 Believe it or not, a manicure doesn’t have to hold you back from learning guitar.

Before we look at these nail-saving strategies, it’s helpful to consider why your instructors tell you to trim your nails. This will help you decide if it’s worth it to keep your manicure, especially when you want to learn more advanced techniques.

Why Trim Your Nails?

In order to produce the clearest, fullest sound on your guitar and be able to switch quickly between chords, it’s easier to keep your nails short––at least on your fretting hand.

By applying pressure with the pads of your fingertips, you avoid damaging your fingers. You gain more control of your tone by avoiding fret buzz. Plus, you can quickly move around the fretboard without having to painstakingly position your fingertips at a proper angle.

Luckily, you have a bit more leeway on your strumming hand. Unless you have extra long Rihanna-type acrylics, you can hold a pick without losing your grip. But you might accidentally snag a string while you’re fingerpicking, creating an unpleasant twang. 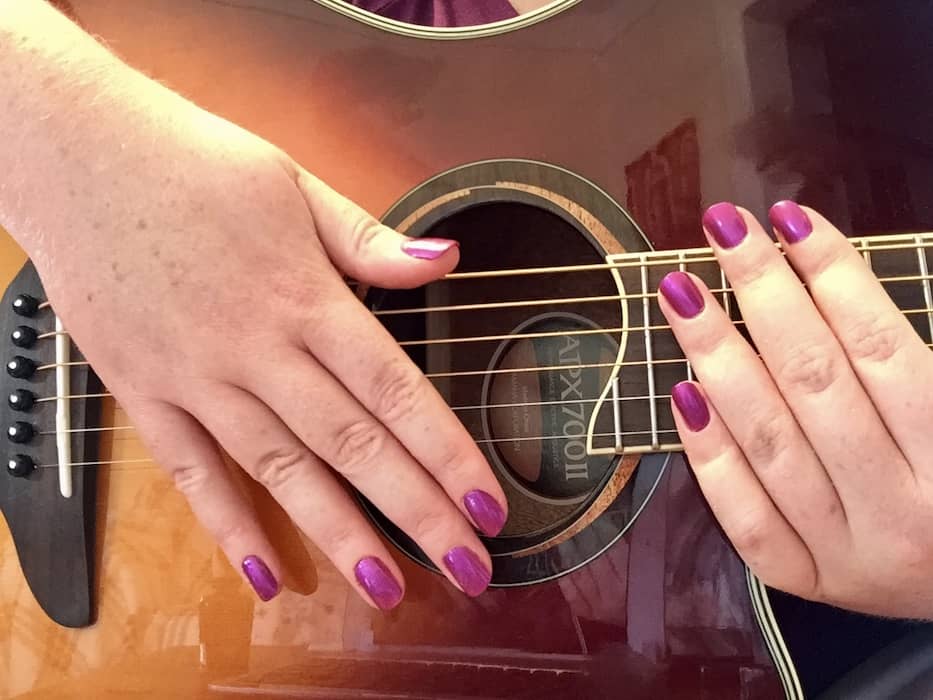 As a teenager––before I was serious about guitar––I used to love growing my natural nails and painting them in bright colors. I still paint them today, but I make sure that they don’t grow long enough to interfere with my E-shaped barre chords or legato licks.

When I showed up for my first lesson with long nails, I was gently told by my instructor that I had to start trimming them to my fingertips. I was disappointed at first, but I was willing to make the sacrifice to become a better guitarist. Little did I know that you really can have the best of both worlds, if you use the right techniques…

To play guitar with long nails on your strumming hand, fretting hand or both, you can use the following strategies:

Believe it or not, many guitarists prefer longer nails on their strumming hand. This makes it easier to play fingerstyle, especially on a classical guitar.

Of course, you can pick nylon strings with the pads of your fingers. But to boost your volume and brighten your tone, it’s better to grow out your natural nails or extend them with acrylics. 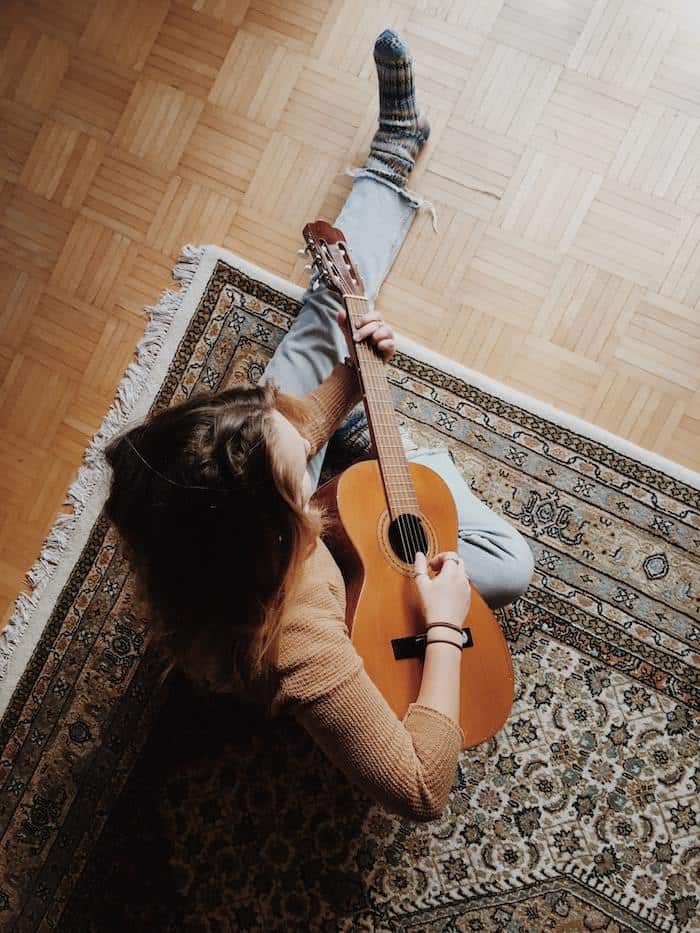 There are no hard and fast rules for classical guitar fingernails. Some musicians keep them just past their fingertips, while others grow them until they’re up to an inch longer. Some prefer to round them off, shape them flat or sloped, or file them into sharp, pick-like points. The most important thing is that your strings slide smoothly off your nails as you fingerpick.

Unfortunately, heavy gauge steel strings can damage your natural nails. This is why many acoustic players wear finger picks for protection. Though they’re often associated with banjos, many blues and country guitarists find that they add a bright, treble-heavy tone to their songs.

Another popular option for musicians of all genders is to wear acrylics on their strumming hand. These can help you play crisp, consistent notes. They’re also a lot less clunky to wear than finger picks.

Curious about the salon treatment for fingerstyle guitarists? Check out this video.

Fretting on a low angle

As you can see, long nails can work wonders for fingerpicking. But what about your fretting hand?

While it is harder to achieve a clear sound when you’re not directly on your fingertips, you can still fret your chords and notes with the flat part of your fingers. You just have to press them onto your fretboard at a low angle, keeping the edge of your nails far from the string. You’ll probably get some fret buzz at first, but with a bit of practice, this will become a lot easier. 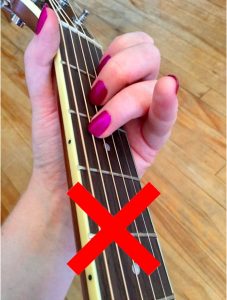 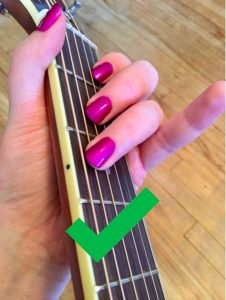 This technique is especially helpful for muting unwanted strings. For example, when you practice a rock, blues or metal song with power chords, you can flatten your last finger against the strings below it to silence them. You can do the same thing in riffs where you play only one string at a time. 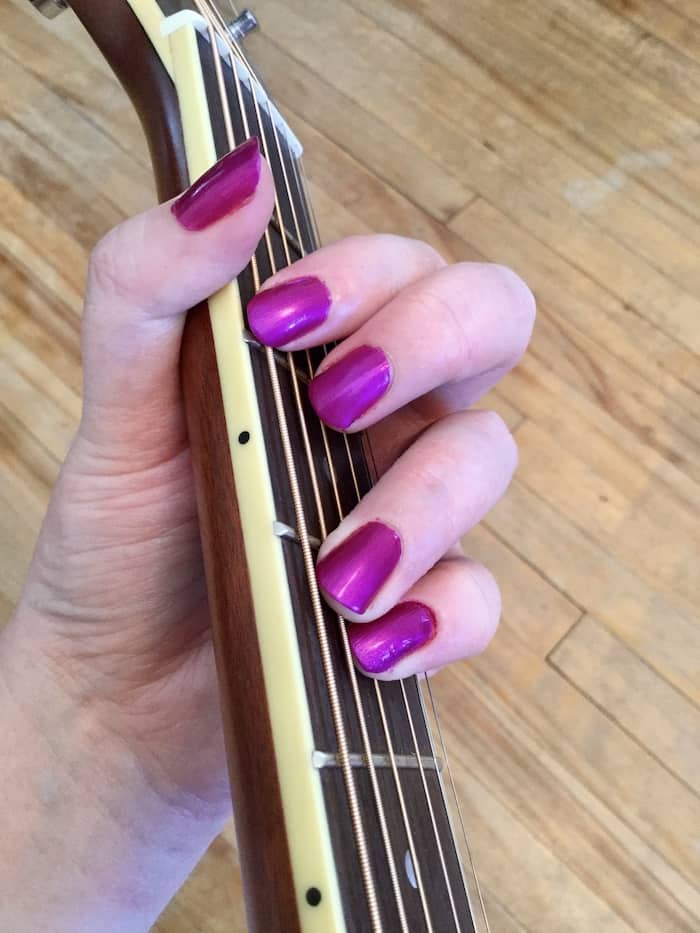 When you fret an E-string power chord on an angle, you don’t have to worry about hitting your third, second or first strings by accident when you strum. The same principle applies for two-string power chords, where you can also mute the fourth string with your ring finger.

Still, fretting on an angle isn’t the most ideal method. It limits the types of chords you can use and slows your dexterity on the fretboard. It can give you joint pain depending on how you build your finger muscles. And while it’s not impossible to fret with extra long acrylics, it’s a technique that not many musicians have even tried to master.

Dolly Parton is proof that you can have crazy long nails and still fret your standard-tuned C and D chords (with a capo). But it takes a lot of practice to be able to play with your fingers pressed at such a small angle and still make your notes ring loud and clear (0:17-4:11).

If you’re a beginner who practices once a week or less, this probably won’t be a dealbreaker. But if you’re serious about learning guitar, it’s better to experiment with some alternate tunings.

The best way to keep long nails on your fretting hand is to shift from the standard EADGBE guitar tuning to an alternate tuning, where you can barre a single finger across your strings.

The most popular option for many long-nailed musicians––especially in the blues, country and folk scenes––is to play in open tuning. This means that when you strum all six open strings, you hear a major or minor chord. For example, in Open E (Dolly Parton’s usual tuning), you transform EADGBE into EBEG♯BE, giving you an E major. Other common options include Open D (DADF♯AD) and Open G (DGDGBD).

Let’s say that you’ve tuned your guitar to Open D. If you barre one finger across all of the strings on the first fret, you’ll get an D ♯ /E♭major. Move your finger to the second fret for an E major, the third fret for an F major and so on. You can play any major chord this way, simply by moving your finger up and down the fretboard.

This Open D demo shows that you can still achieve a great sound without destroying your manicure.

The downside with open tuning is that you can’t play extended chords, like 7ths or 9ths. But with a strong strumming or fingerpicking rhythm, you can make up for this lack of diversity. 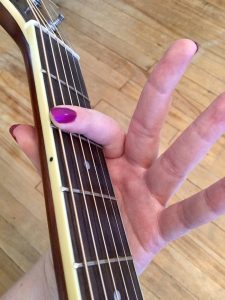 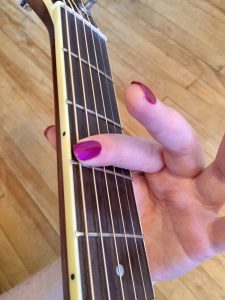 With alternate guitar tunings like Open E and Drop D, you can play major chords or power chords respectively––simply by barring your index finger across your frets.

Another great option is to use Drop D tuning. By downtuning your sixth string one full tone to get DADGBE, you can adjust your E-string power chord shape to accommodate your manicure. Instead of playing with your index finger two frets above the other one (or two) on the sixth string, you can use one finger to barre the sixth, fifth and fourth strings.

Even with Drop D tuning, you might run into complicated riffs or alternate power chord shapes that make it difficult––if not impossible––to play with super long acrylics. Plus, most of these songs are strummed instead of fingerpicked. But as long as your nails are short enough to fret at an angle and play with a pick, you can still succeed at playing guitar.

With so many options out there, there’s no reason why you can’t play guitar and keep your long nails if you really want to. You’ll just have to adjust how you pick your strings, fret your chords and tune your strings.

You may not be able to fret extended chords or incorporate advanced lead guitar techniques. Still, with these minor adjustments, you can become a skilled rhythm guitarist with fingers that look great and play even better. 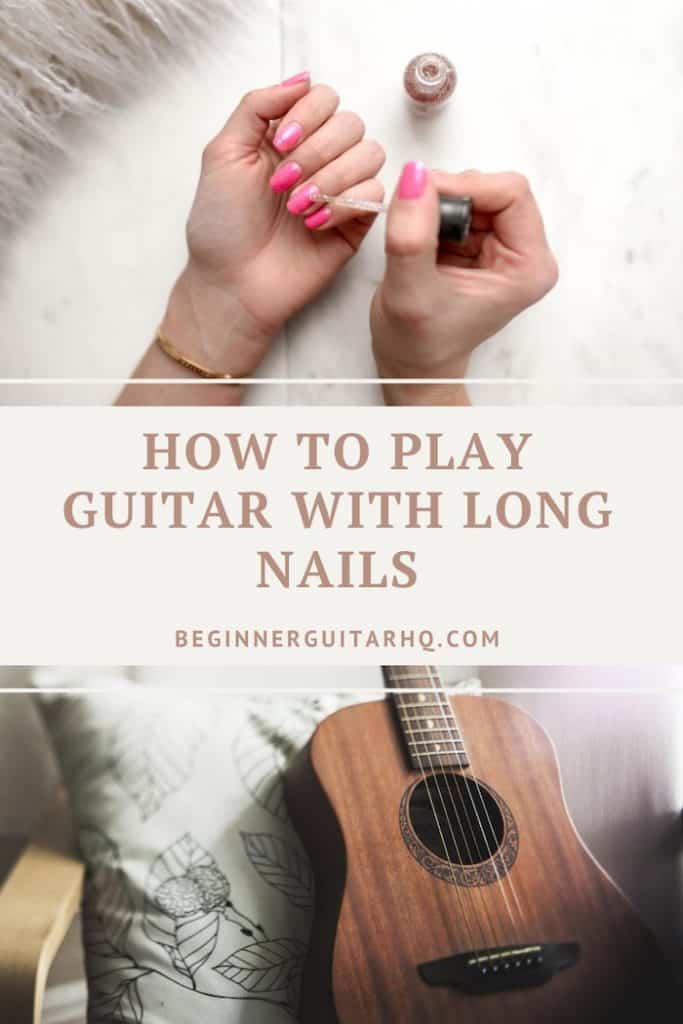