Ibanez has been on the forefront when it comes to extended ranged instruments and their RG80E is no exception. 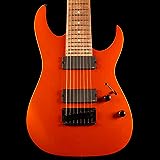 The RG80E has a Meranti body and a Walnut and Maple neck, making the instrument pleasantly light given its added hardware. The fingerboard has 24 frets across a Jatoba, all at a 27” scale length making it well suited to handle the added tension of the 7th and 8th string. What makes the guitar especially good are the pickups it comes stock with. The guitar is loaded with EMG 808s in the neck and bridge position, giving you a classic high output tone that handles the extended range well. While not as affordable as some of the other models on the list, the RG80E is the best standard when it comes to the best 8 string guitars.

(The RG80E is a staple amongst Ibanez best 8 string)

Extended range guitars, particularly 8 string models, would not be as popular as they are today if they had not been adopted early on in their creation by certain iconic metal bands.One band in particular, Meshuggah are considered to be the godfather when it comes to 8 string guitars. So it is more than fitting that the signature instrument of the members of Meshuggah be included on the list.

The Ibanez M80M is the signature guitar of both guitarists for Meshuggah and as such is spec’d out to their exact specifications. The guitar features an Ash body into a 5-piece Walnut and Maple neck, which paired with the Jatoba neck, gives it excellent resonance. What makes the guitar one of the best 8 string guitars today however is the scale length, at 29.4” this guitar has a longer scale length than is typical, giving the player more control of the tension and action. All this made complete with the stock pickups. A Bill Lundergren M8P in the bridge position gives the players access to the extremely tailored and well balanced tone that Meshuggah is known for, giving players the ability to model their tone after, or improve upon, one of the most iconic adopters.

(The M80M perfectly encapsulates the tone and aesthetics of Meshuggah)

Schecter is a brand never absent from lists of the best metal guitars around, and this list is no exception. Mixing Schecters classic metal aesthetic with modern capability makes the Damien Platinum 8 one of the best around.

The Damien Platinum 8 is an example of a form and function mixing perfectly. The Damien Platinum 8 features a Mahogany body in a Maple neck, making this one of the heavier guitars on the list. The guitar is equipped with EMG 808s for well balanced metal tones across the entire range of the guitar. What makes this guitar especially worth checking out is the comfortability. Schecters contoured edges, bevels and belly cut make it an extremely comfortable guitar. Especially when compared to some of the other best 8 strings around, whose harsh edges make for an uncomfortable playing experience long term.

Often 8 string guitars are aesthetically similar, with many of them falling easily into the stereotypical “metal guitar” design category. The Banshee Elite-8 however takes a much more classy approach to what somewhat call an overdone aesthetic.

This is the first guitar from the list that features more exotic woods and tops than is typical. With a swamp ash body and a flamed maple top, this guitar is more reminiscent of the classier schechters of old. The guitars pickups are unique as well, being Schecters own Supercharger Mach-8 pickups, which while used with the 5-way selector switch, gives the player an array of tones typically out of reach for even some of the best 8 string guitars.

What makes 8 string guitars some of the best tools for musicians is their ability to give players access to a whole new range of textural and diverse tonal profiles. Stephen Carpenter of the Deftones is a guitarist that is well known for using 8 string is a creative way, and his signatures are a reflection of his style.

The ESP LTD SC-608 is definitely one of the most unique looking guitars on this list. Its finish alone is enough to set it apart. Featuring a Mahogany body, a 3 piece Maple neck and a Maccassar fingerboard, this guitar is built for extended resonance. What makes the guitar especially great are the pickups. Loaded with two of  Carpenters signature Fishman Fluence Modern pickups in the bridge position, the tones that lie in this guitar are almost endless. With the ability to change attack output, switch between active and passive modes and alternate between classic and modern tones, the SC-608 is without a doubt one of the most versatile guitars on this list.

Animals As Leaders is one of the most progessive musical acts out there today, due in no small part to their creative and vibrant use of 8 string guitars to create incredibly complex and ground breaking progressive rock. That is why the signature guitar of one of ⅓ of Animals As Leaders, Javier Reyes, is the perfect guitar to included on this list.

The ESP LTD LJR208BLK is an example of a guitar perfectly crafted to an artist’s specifications. Features including a swamp ash body and a 5 piece Walnut/Maple/Padauk neck that give the guitar a unique tonal profile. The unique body shape stands out. The most valuable feature of the guitar however are the pickups. Equipped with Reyes own signature Fishman Open Core Signature pickups, this guitar has one of the widest arrays of tonal settings and profiles of this list. The 5-way selector switch gives the player the ability to switch between a a variety of preset voicings allowing players to model or even alter Reyes’ signature tone.

For the final entry in our list of the best 8 string guitars, I felt it only right to include an instrument with one of the most popular features, fan fretted guitars. The Jackson DKAF8 features a fanned fretboard, which means the scale length is longer on the bass side and shorter on the treble side, yielding better intonation and attack across all the strings. No more floppy low notes and buzzy high ones.

The fanned frets are not however, the only thing this guitar has going for it. The DKAF8 features a mahogany body with a one piece maple neck, and a thin U neck radius, giving the player a familiar feeling neck despite the extra width.

(The string tension is the same on both the highest and lowest string, making fanned frets invaluable)

That concludes our list of the best 8 string guitars for your money on the market today. It’s important to understand that not all are created equal. Pick the best for your style, and don’t be afraid to go out of your comfort zone when it comes to features.