Personally, I like the key of E. I like the chords in it and it’s a comfortable key for me to sing in. If you’re a beginner, some of the chords may be a little harder, but there are plenty of ways to play chords that may be easier. In any case, it’s nothing that regular practice won’t fix.

If you’ve similarly found that you enjoy this key too and want to get into writing your own music, it’s helpful to know the common progressions to get you going. You’ll find that a lot of songs combine different progressions. It just keeps things more interesting and adds variation between the verses, pre-choruses, choruses and bridges.

Having said that, as long as you stay mostly within the key, and I say mostly, because a chord outside of the key in a place where you want tension can sound really good. And that brings me to my point, whether you stay strictly within the key or borrow a chord here or there from outside it, as long as it sounds good, do what your creativity leads you to do.

But without further ado, let’s get into the nitty gritty of the key of E and the more common chord progressions.

Chords in the Key of E

The Scale of E major has four sharps. This is according to the pattern of the major scale and is easy to see on the circle of fifths. The positions of the sharps on the circle, in particular, follow the pattern of a clock with the exception of C and Am (the inner keys are all minor), which have 0 sharps. So E as you can see is at the 4 ‘o clock position- 4 sharps. 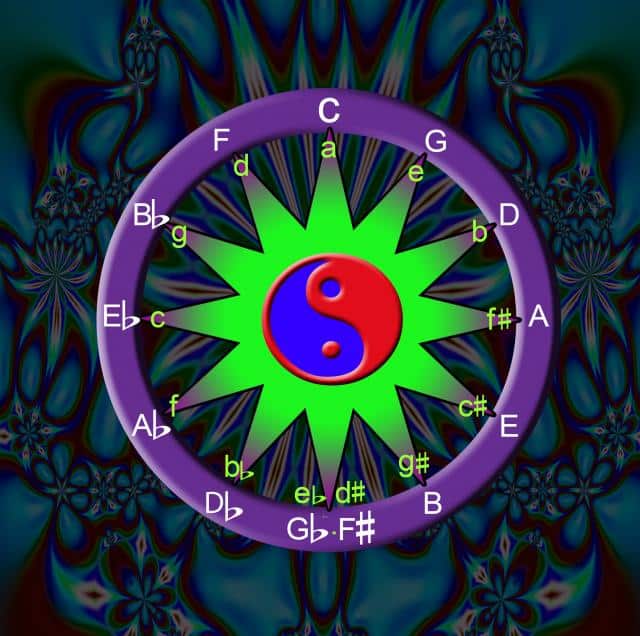 WWHWWWH- W stands for whole tone and H stands for half tone (semitone). You may also have seen it written as TTSTTTS for tone and semitone.

Secondly, there are diatonic chords that will always follow the same pattern in a major scale:

Therefore, the chords in the key of E are:

So you get the following chords:

You can find variations of some of the more common harder chords within E major chord progressions to play here:

Chord Progressions in the Key of E

If someone calls a chord progression out to you, they use regular numbers. It’s good to familiarize yourself with the pattern for major, minor, and diminished so you always know which to use.

Here are some great chord progressions:

Keep things simple. Just two chords in the verses of Blue Eyes Crying In The Rain by Willie Nelson:

Chord progressions don’t always need to start on the root note. This is the chord progression in the chorus of Blue Eyes Crying In The Rain by Willie Nelson.

Another two-chord progression. As you can see, as long as you add some variation in the chorus or bridge, or perhaps spice it up with the lead parts or bassline, a two-chord progression is perfectly fine. Picking the chords to make a melody or just an arpeggio also goes a long way. This is the progression used in the verses of My Hero by Foo Fighters:

This is one of the most common progressions, particularly in blues. It’s known as the 12 bar blues, but you’ll find this progression in a variety of genres.

If you look again at the circle of fifths, you’ll find your four and five chords on either side of the root chord. This chord progression is pretty simple in terms of it just being three chords:

You can spice it up by throwing in seventh chords (B7 makes a good turnaround), you can hear this happening in this backing track.

In this progression, the four and five chords are switched:

The entire song Yellow Ledbetter by Pearl Jam consists of this progression. I can’t embed the video, but give it a listen.

Simple, but good enough for a world-renowned band. It’s using the same chords as the two progressions above, but changes the sound completely by putting the E in the beginning and middle of the progression:

Here’s I Saw Her Standing There by the Beatles:

This is one of my favorite progressions in E. I cheat a little with my B barre chord, turning it into a suspended chord (the Am barre chord shape minus the middle finger).

While I do like the sound of sus chords in general, I cheat with the B barre chord in the A-shape mainly because of laziness. I struggle to barre three strings, the mechanics of my fingers fail me there. And to use three fingers instead, well, I just use two. Easy for sliding between C#m and B.

This progression gives you:

You can hear this in the second and fourth lines of the verses in Under the Bridge by The Red Hot Chili Peppers.

This progression is like the previous, just with an added G#m before the A. In other words:

You can hear this in the first and third lines of the verses in Under the Bridge by The Red Hot Chili Peppers.

This progression is another one you might recognize, even if it’s not the only progression in a song. While Don’t Stop Believin’ by Journey uses I-V-vi-IV in the first and third lines of the verses, you’ll hear I-V-iii-IV in the second and fourth lines.

This progression gives you:

As common as C#m is in the key of E, you’ll also find F#m. This progression goes like this:

The Climb by Miley Cirus uses this progression almost exclusively in the song except for the end of the verses, chorus, and solo:

Here you get the C#m and the F#m in one progression:

The song Mercy, Mercy Me by Marvin Gaye uses it throughout the entire song, with the exception of going up half a key during the sax solo and outro:

Another example of not starting on the root note. The chorus of Roll Away Your Stone by Mumford and Sons goes like this:

The E/G# is an E with a G# base, it just adds depth to the chord, and as you can see is still within the key.

Some of the most popular chords in an E major progression switched up a little:

You can hear it in the first and third parts of the chorus and in the post chorus of The Best Of Me by The Starting Line:

A Few More Common Progressions in E to Try

Using Chords Outside the Key of E

As I explained before, sometimes, to add a little tension or make a song more interesting, or in the case of the D# dim, make a song a little easier or striking in a different way, a chord outside the key can be used.

Where Is My Mind by Pixies

While the song is written in E, instead of G#m, they use G#. The verse uses the progression III-IV-I-vi.

The bridge has an Am in it as well as an A. Using a major and minor of the same chord is fairly common to add that little something to a song. The chorus progressions are as follows:

The key of E is great. It has distinctive chords that add instant depth depending on the voicings you use. If you or whoever is singing along with your playing finds it comfortable to sing in the key of E, go for it.

The progressions mentioned are pretty common, now that you know what to look out for, you might recognize them in the songs you listen to. The beauty is that you can take any chord progression and transpose it into the key that suits you.

But so that the guesswork is taken out, there you have quite a few chord progressions. Mix and match them to write your own songs. And if you want to borrow chords outside the key, for example using a major and minor of the same chord, do it if it sounds good to you.

Yes, music has rules, but it’s also creative with so many different sounds from different parts of the world and across various genres. You can just let your creativity run free. 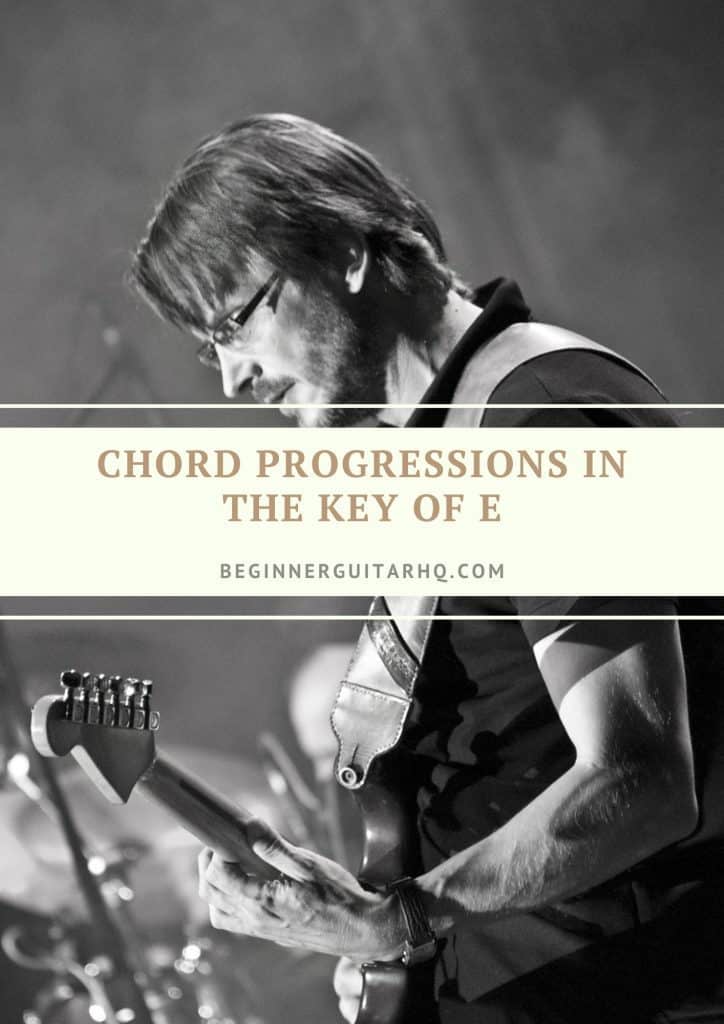