Learning guitar is exciting and fun. But it can also be confusing and frustrating, especially if you’re trying to play chords or riffs above your skill level. If you’re learning on your own, it can also be hard to know where to get started. And of course, it’s all good and well to learn chords, but we all want to actually make music.

Here are 15 basic guitar chords to get you started, with a few bonus chords thrown in. They’re all fairly easy to play and once you can switch between them well enough, you’ll be playing your favorite genres.

Open chords are usually the first thing guitarists learn to play. Learning how to play chords takes as long as it takes for your muscle memory to kick in. As you master these chords and improve your strumming, you’ll find that you can play a variety of songs and even write your own songs.

E minor is a great chord for adding in a little bit of tension or depth into a song. Because it’s a minor chord, it adds a bit of that sad sound into the chord progression.

Em also only requires two fingers. You strum all six strings, so there’s no need to stress over skipping any strings.

This chord is so easy that if you enjoy picking or plucking the strings in a simple pattern, for example, strings 6 (the low E), 3 (G), 2 (B), 1 (high E), you skip having to put your left-hand fingers (or your right-hand fingers if you’re playing left-handed) down at all.

How to Play Em: 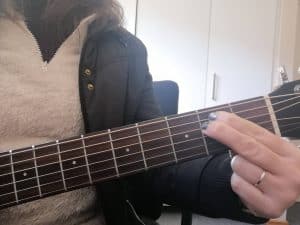 If you aren’t sure what frets are, they are the “boxes” created by the metal strips on the neck of the guitar.

Written simply as E (all major guitar chords are just written as the letter), E major sounds happier than an Em chord. But it still has quite a rich, warm sound in my opinion. Once you play it, perhaps you’ll feel differently.

This chord is a little trickier than Em, but it’s still one of the simpler chord shapes to play. You also play all six strings when you strum the E chord.

How to Play the E Chord: 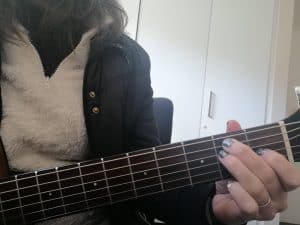 Seventh chords are a great way to add some flavor to your playing. In this case, it’s a dominant 7th chord. In today’s list, you’ll also see minor 7th chords and major 7th chords.

This may be a bit complicated, especially if you are new to music theory. If you’re interested in the theory behind 7th chords, here’s a video that explains it specifically for guitarists:

They provide tension and usually resolve to the major chord. But it doesn’t have to, if you like the sound, you can use it to replace the E chord for a more exciting sound. 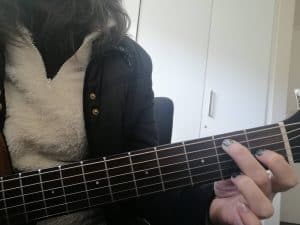 Playing the basic E7 chord is as easy as playing the E major Chord without your ring finger.

The Am Guitar Chord

Another minor chord, it serves the same function as Em would. The shape is the same as for the E chord, but moved up.

Unlike with the E chord, for a true Am, you would strum only from string 5 down.

It’s not necessarily wrong to strum all 6 strings though. Spelled out, the Am chord would be A, C, E. The 6th string is an E string and goes well with the Am chord. It just adds a little more bass and turns the chord into Am/E.

How to Play Am: 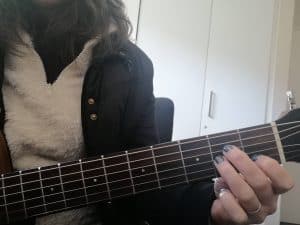 The shape is the same as the E shape

The Am7 Guitar Chord

I love this chord. It has a slightly jazzy sound and just adds that something special into a progression. As you may guess, it often resolves to the Am chord. When I choose to use this chord, I often just use it to replace the Am chord if I want to add some flavor. 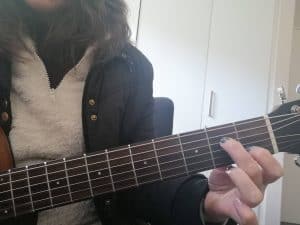 To play Am7, simply remove your ring finger from the Am shape.

The A Guitar Chord

As you may have guessed by now, A major, is the happy sounding as opposed to the sadder, more serious sounding Am.

This chord is one of the easiest to play. You just place three fingers in a row. When you strum, you’re only supposed to strum from the 5th string down, but as the A major chord spelled out is A, C#, E, adding the 6th string will just add a bit of base resulting in a deeper tone and the chord A/E.

How to Play A: 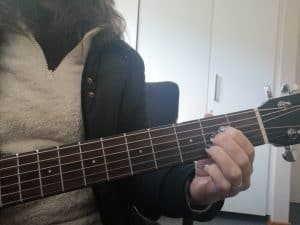 The A7 Guitar Chord

It’s fun to alternate this chord with the major A chord. I often do that with E7 and E, and A7 and A when I feel like playing 12-bar blues in the key of E. 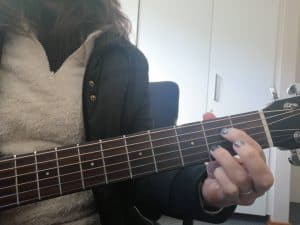 A7 is as easy as lifting your middle finger when playing the A major chord.

If I replace A completely with A7, I often play it with my index and middle finger.

C major looks a little more complicated than the previously mentioned, but it’s not too difficult. It’s a chord that’s in two of the most common chord progressions, Am, C, F, G and G, C, D, Em.

Don’t worry if four chords is more than you want to take on at the moment, there are some really great 3-chord songs too.

While the open C chord is played from the 5th string down when strumming and picking, you can also play the 6th string for a bassier C chord. This is because written out, the C major chord is C, E, G. With the 6th string, your C chord becomes C/E.

How to Play C: 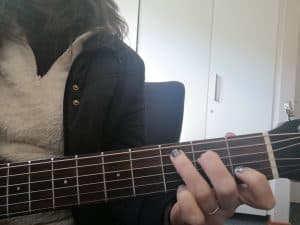 How to Play Cmaj7: 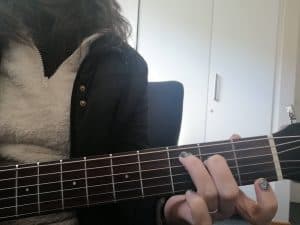 Cmaj7 is very easy to play. You simply remove your index finger from your C chord.

D major is also a little trickier, but easy enough to get the hang of with regular practice.

Because it’s played using strings 1 to 4, the tone is higher sounding with very little bass. I think of it as sweet and bright. You only strum and pick from the 4th string down if you’re playing the D chord as is.

You can strum it from the 5th string to get the chord D/A.

How to Play D: 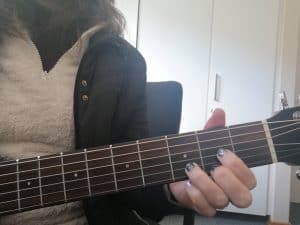 The Dsus2, or D suspended 2 chord, is a slightly dissonant chord. But don’t let that put you off, it sounds really good. It resolves up to the D major chord.

How to Play Dsus2: 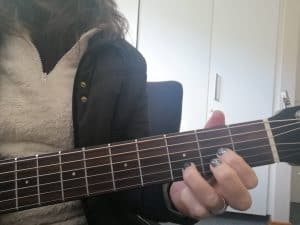 Simply remove your middle finger from the D chord to play Dsus2.

Watch this to learn more about suspended chords:

Another slightly dissonant chord, but in a beautiful way. It resolves down to the D major chord.

How to Play Dsus4: 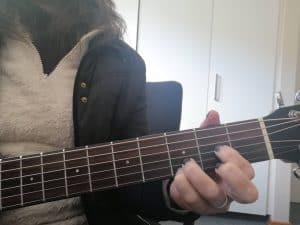 Simply pop your pinky onto the 1st string in the 3rd fret while playing the D chord.

If you’re completely replacing D with Dsus4, you don’t need to use your middle finger.

This may be your first foray into barring. Don’t worry, this is the open version, so you only need to barre two strings.

Like the D chord, it’s traditionally played on the bottom four strings resulting in a higher, brighter sounding chord. But if you struggle to play just those and happen to strum the 5th string too, don’t worry, it turns into F/A.

How to Play F: 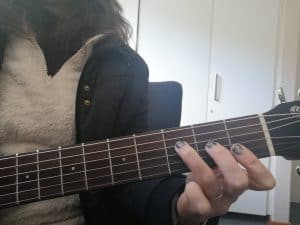 For many newer guitarists, the G chord is one of the trickier ones to learn in the beginning. For the first few months that I played this chord, I had my index and ring finger swapped around. Now when I play whatever the heck that is, certainly not G, it sounds horrible to me. How I didn’t notice back then, I don’t know.

Finally, someone at my church corrected me and the G chord and I have been simpatico ever since.

You strum all the strings with this chord which takes some of the pressure off an already trickier chord to play.

How to Play G: 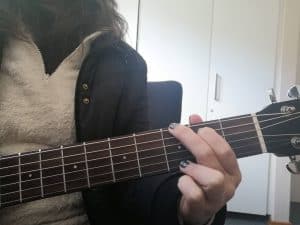 If you like rock, you’re going to enjoy power chords. The shape I’m going to show you will help you to train your pinky too and is very simple. It’s the shape that I find easiest to play, and it’s my favorite too.

The secret for this variation of the power chord shape is to get to know the notes of the 6th string.

If you can get to the 11th fret, you’ll have every note covered in terms of a single scale. These power chords work for major and minor chords, so they really are quite helpful. You may not get the same nuance as if you were playing the full barre chords, but you won’t clash with someone playing major or minor scales or chords over what you’re playing.

The 6th string when played open is an E. Each fret indicates half a step. Between all the “main” notes there is a whole step. The exception is between E and F and B and C since these notes are only a semitone apart.

How to Play Power Chords: 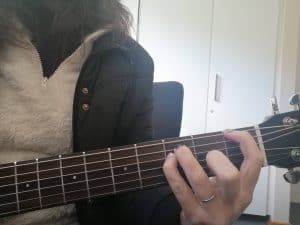 Simply put your index finger on the root note that you want. For example, to play F:

You may notice that unless you want a high-pitched E power chord all the way in the twelfth fret, you need to do it a little differently. Essentially you’re just going to play an Em since the root note is the open E string.

You only play those three strings for a bassy rock sound, and you can move the shape up and down to get whatever note, well chord, you want.

To be honest, I only play this shape until about the 7th fret. I usually play chords from C up using the root note on the 5th string (C= third fret), with the same shape.

You can learn about the other power chord shapes here.

Now you have quite a few chords that you can use to play and create songs. If you get bored of the sound of

the major and minor open chords, throwing in the variations with the suspended and seventh chords will go a long way to spice up your playing a bit.

Don’t put pressure on yourself to quickly switch between chords or get your fingers into the chord shapes immediately. This will just end up frustrating and demotivating you.

Remember, it takes time to learn. Find songs to play with the chords that you do find easier, but be sure to challenge yourself with the harder ones too.

Above all, have fun. That’s what making music should be. A source of enjoyment and a way to express yourself. 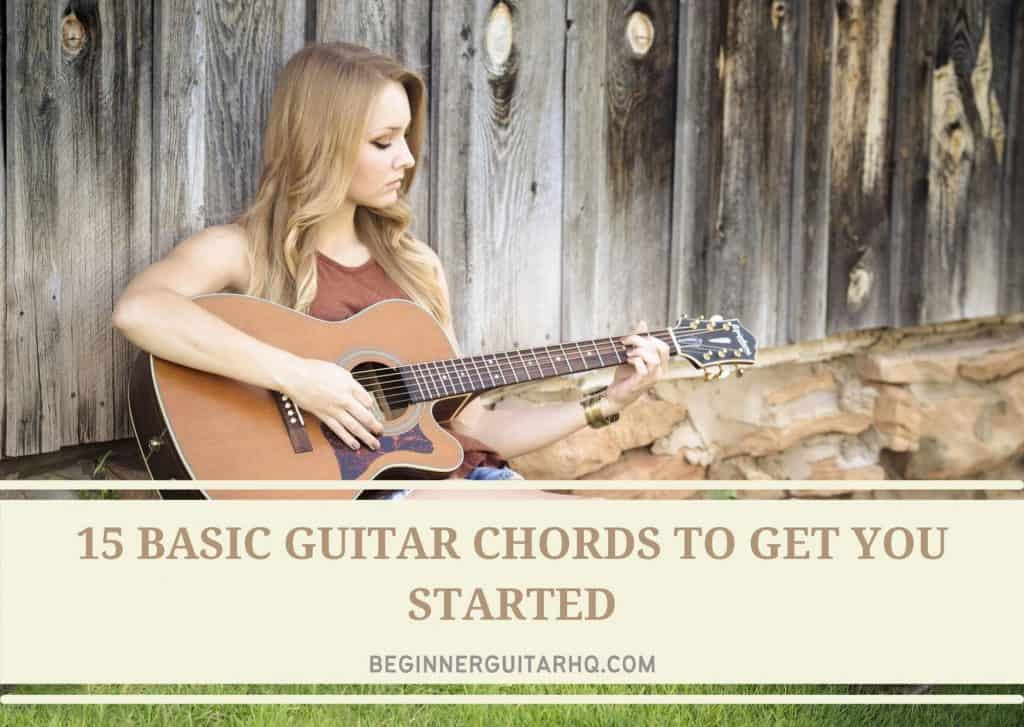