If you’re new to guitar, chances are you’ve only been playing in standard tuning. This is when you tune your…

Standard tuning has been the go-to for popular music in the Western world. But it’s not always the easiest tuning to use! Because it’s organized into perfect 4th intervals (excluding a major 3rd between the G and B strings), you have to memorize tons of different chord shapes. Plus, some of these chords involve a giant, finger-cramping stretch across the fretboard.

Alternate tunings, on the other hand, can make some chord shapes easier. They also create new sonic possibilities that aren’t always available in standard tuning.

One of the most common alternate tunings you’ll come across is Open D. Unlike standard tuning, which has an indistinct Em11 sound, it sounds a nice, clean D major when you strum all six strings at once. To fret your other major chords, all you need to do is barre across all six strings with one finger!

Open D tuning pops up in many genres, like blues, folk, indie and rock. Because of its easy barre chords, it’s especially popular with slide and fingerstyle guitarists. 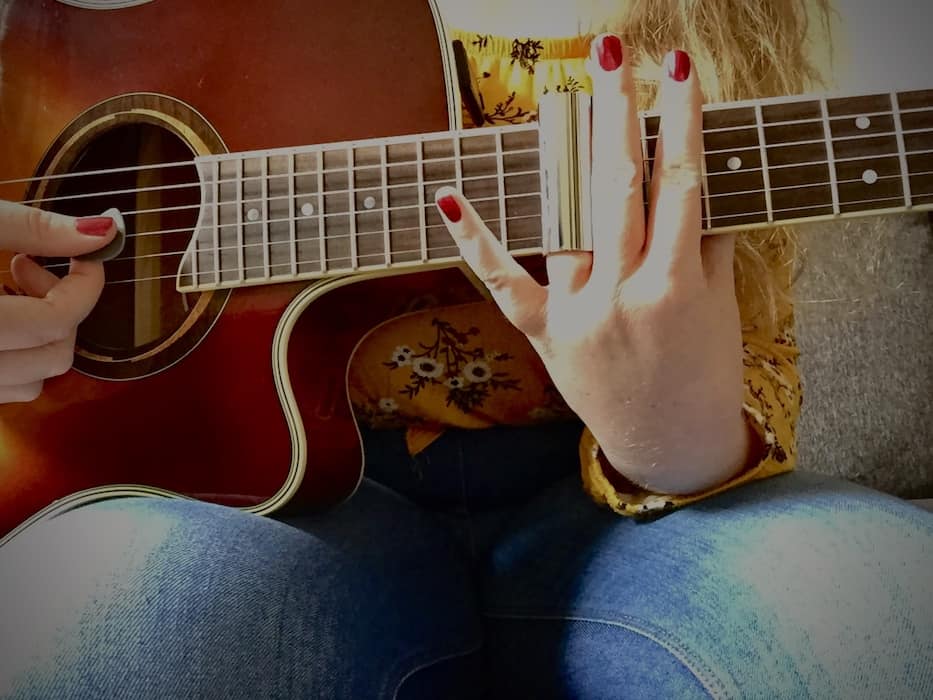 This guide will get you started with some must-know chords and scales in Open D. And of course, we’ll look at some popular songs you can add to your setlist!

First things first, let’s look at how to tune your guitar. Your 6th to 1st string notes should be in this order –– D A D F♯ A D.

Here’s a breakdown of the changes from standard tuning:

Guitar necks that are used to standard tuning may take a while to adjust to this new tuning. This is because you’re changing the tension on the neck by downtuning strings unevenly –– as opposed to a tuning like D G C F A D, where every string is exactly one whole tone lower than standard. Just take it slow and don’t get discouraged if you need to retune your guitar a few times.

Once you’ve tuned your guitar, you may hear some awkward fret buzz. Don’t worry! This just means that you need to raise the action (distance from the string and the fretboard).

In this video, luthier Galeazzo Frudua shows you how to adjust the action on an electric Stratocaster-type guitar.

Once you’ve adjusted the action, retune your strings and see how it goes.

Another way to kick fret buzz is to swap your light gauge strings for medium strings (also called 11s in electric guitar). This way, your strings will feel nice and tense –– even when downtuned. Plus, you won’t have to fret these heavier strings as hard as you would in standard tuning.

On a final note, Open D is often used as a gateway to other open tunings –– especially Open E. This contains the notes E B E G♯ B E. From standard tuning, you risk breaking your strings by tuning up one whole tone on your 5th string and one half tone on your 3rd string. However, from Open D, all you have to do is add a capo on the second fret. 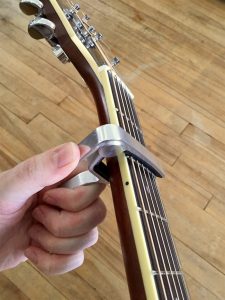 With a capo, you can easily change to other open tunings. Just use your 6th string root note as a guide.

If you’ve only played in standard tuning, learning new chord shapes in Open D may seem intimidating. But don’t sweat it! You can fret almost any chord as a moveable shape with a 6th-, 4th- or (more rarely) a 5th-string root.

If you want to branch out from moveable chords, you can also play some open chord voicings at the 1st to 4th frets.

First off, you’ll need to memorize the notes on your new low D (6th) string. If you’ve already memorized your notes in standard tuning, just think of which fret you’d play on your mid D (4th). Or, you can think of your standard E string notes, then raise the position by two extra frets.

Let’s say you want to play an F major chord. Going up the 6th string, you get D♯/E♭on the 1st fret, E on the 2nd fret and F on the 3rd fret. Barre across all six strings at the 3rd fret and boom! You’ve got an F. 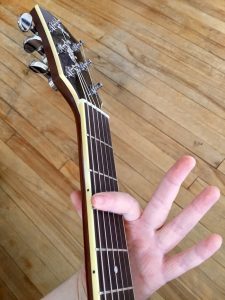 This full major barre chord can be shifted to any position on the guitar neck (Self-taken).

But even in standard tuning, you don’t need to strum all 6 strings to play a major chord. As long as you’re playing at least one root, 3rd and 5th note, you’re good to go! The same goes for Open D tuning. For example, you could still play an F chord at the 3rd fret by barring the 1st-4th strings and muting the others. 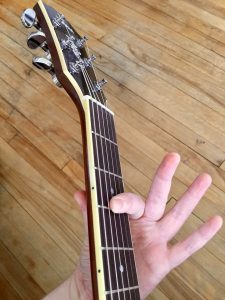 This moveable major chord is a good substitute for a full barre –– especially if you don’t have enough fretting strength in your index finger.

Minor chords have the same root and 5th notes as major chords, but with a flat 3rd instead of a natural 3rd. It’s hard to maintain a full barre on your other strings when you have to move back one fret on the 3rd string. So instead, most guitarists fret only the 1st-4th strings or the 6th-3rd strings. 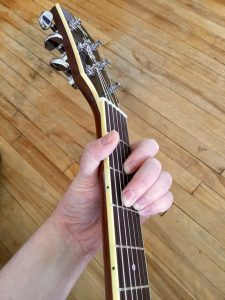 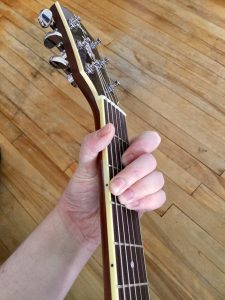 These are the two most common moveable shapes for minor chords –– using the 3rd-6th strings (left) and 4th-1st strings (right).

One of the cool things about Open D is that you can add open strings to turn your moveable major and minor shapes into various standalone extended chords.

Let’s try fretting the 6th, 4th and 3rd strings at the same position. Mute the 5th string and play the 2nd and 1st strings open. If we slide this shape to the 3rd fret, it becomes an F6. At the 5th fret, it becomes a Gadd9. At the 6th fret, it becomes a B♭maj7, and so on. Any of these chords can substitute for a standard major chord, adding a nice flavor to your chord progressions. 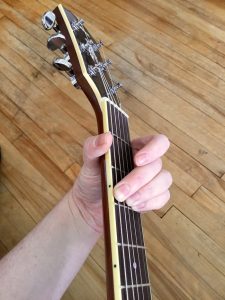 This moveable extended chord shape can liven up a progression by substituting for major chords. For minor chords, just slide one fret lower on the 3rd string.

These voicings are really just the tip of the iceberg. You can adapt almost any type of chord into a moveable shape, including: 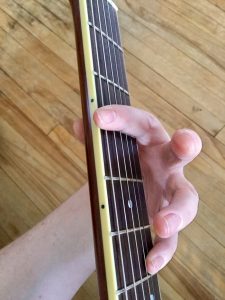 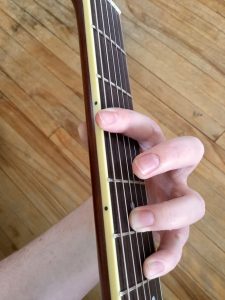 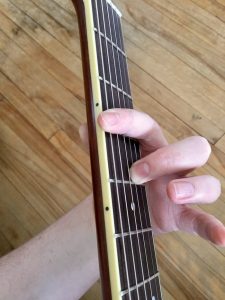 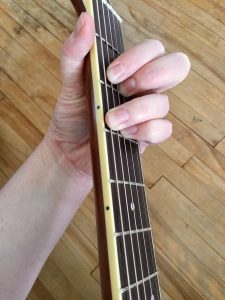 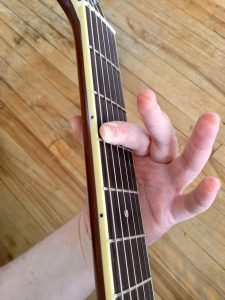 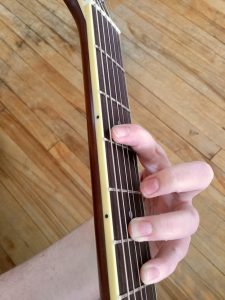 When playing in Open D, most guitarists stick to moveable chord shapes. They’re easy to memorize and –– except for the stretchy 7th chord –– easy to fret. But you can add some variety to a chord progression by playing in open position too. Especially for D chord variations, where you don’t really have a choice (except to slide all the way to the 12th fret).

It would take ages to discuss the complete list of open chords. So instead, I’ll point out some of the most popular ones you might come across.

D7, Dsus2 and Dsus4 are played exactly the same way as your moveable barre shapes. Just pretend that the nut is your barre and add the proper voicings below it. Easy!

Some other D chord variations include… 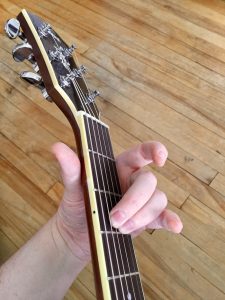 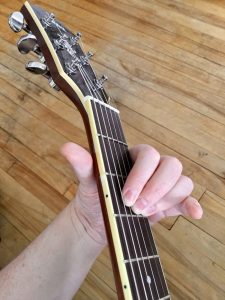 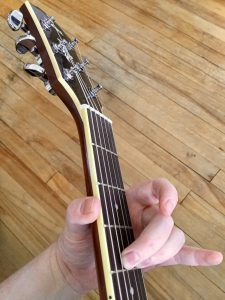 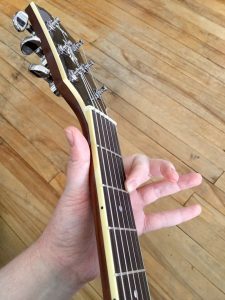 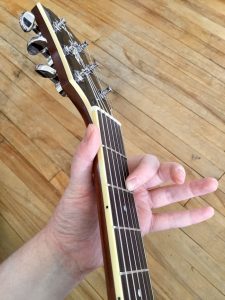 Beyond these D variations, other chords are trickier to play in open position. Especially when you’re dealing with ones that don’t contain a D or A note. But as long as you’re careful about muting your unwanted strings, it’s definitely doable!

Here are some easy chords to add to your repertoire. Don’t forget to play the unmentioned strings open!

As you probably guessed, the scale you’ll work with most often in this open tuning is D major. But unlike standard tuning, where you play only 2-3 notes per string, you’ll need to play 4 notes on your 6th string and 2-3 notes on the others.

Major pentatonic scales are like regular major scales, but without the 4th and 7th scale degrees. They sound especially great in genres like rock, country and blues. 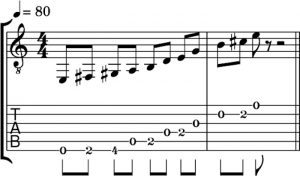 If you add the ♭3 note to this scale (3rd fret of the 6th string and 4th strings), you can turn it into a D major blues scale.

For a true Delta feel, you can also improv over a D minor blues scale. Like the major blues, it contains a chromaticism which sets it apart from diatonic scales like D major. The scale degrees are: 1 ♭3 4 ♭5 5 ♭7. 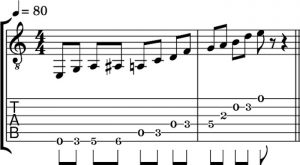 If you remove the ♭5s from the scale (the 6th fret of the 6th string and the 2nd fret of the 3rd string), you can transform it into a D minor pentatonic.

Okay, so we’ve covered some basic chords and scales. Now, here comes the fun part –– putting these to use in songs.

I find that the best way to get comfortable with Open D chord progressions is to start with basic 3 or 4 chord songs that you already know. This way, you can get used to locating these chords in this new tuning.

To make things even easier, let’s start with a few songs in the key of D major…

Once you’re familiar with these chords, you’re ready to start learning some proper Open D songs.

Some of my favorites are:

The novice-friendly slide blues classic “Dust My Broom” is a great Open D song to start out with.

If you have a capo, you can try songs in Open E, like:

This lesson covers “The Cave” –– another novice-friendly song, with an infectious fingerpicking rhythm.

You can also find some popular indie folk songs in Open A♭ tuning (with a capo on the 6th fret), like “The Gardener” by The Tallest Man on Earth and “Re: Stacks” by Bon Iver.

For a beginner guitarist who’s never ventured beyond standard tuning, Open D may seem challenging. But don’t be afraid to step outside your comfort zone! You’ll thank yourself later. Trust me.

As a beginner, I was always too intimidated (and to be honest, too lazy) to learn any song that wasn’t in standard tuning. It wasn’t until I’d been playing for almost a decade that I finally pushed myself to learn some alternate tunings. As a result, I discovered some new songs that were surprisingly fun to learn –– with chords and scales that were surprisingly easy to improvise with.

Nowadays, Open D is my favorite alternate tuning, after DADGAD (which is essentially an Open Dsus4). It’s introduced me to a whole new world of blues rhythms and folk melodies.

Whether you’ve been playing for a few months, a few years or a few decades, I hope this guide has helped you see the beauty (and usefulness) of Open D tuning. 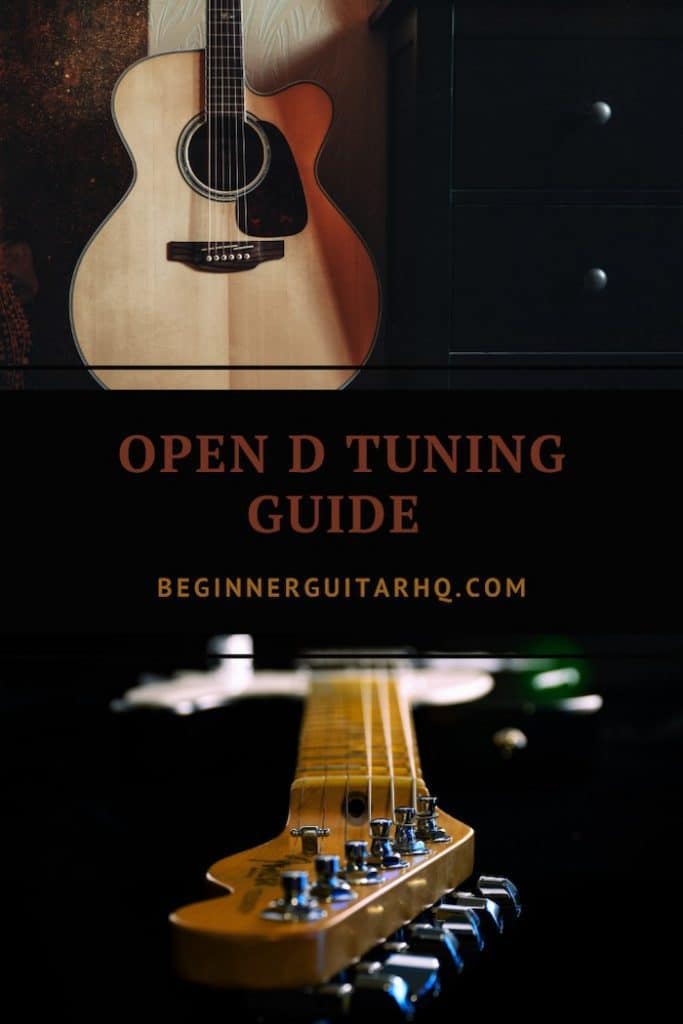