In this important guide, I’ll talk you through the best Marshall amps.

If you’re looking to decide which Marshall amp is right for you, then look no further…

This means a solid state amp is cheaper to produce (and therefore sell), and are typically chosen as practice amps. Also, an effect heavy, ‘modern’ amp will always be solid-state, as they are capable of having digital screens fitted and a vast array of technology added to the output signal. They are also lighter and easier to use than a valve amp. However, the sound quality of a solid state amp often lacks at higher volumes, with this often leading to the unintended distortion of otherwise clean signals. Furthermore, a tube amp is much more responsive and offer a more ‘real’ distortion, that may value above the digital distortion of a solid state amp. A tube amp will also almost always be louder than a solid state, making this a better choice for gigging. The main problem with tube amps are their size and weight due to the mechanics within the amp. This also makes them more prone to breaking, and they will always cost a considerable amount more than a solid state.

Make sure you’re absolutely certain why you’re buying your amp, and therefore which type of amp will be your best bet.

A Bit About Marshall

The Marshall amplifier brand is arguably the most recognizable out of every brand. A huge number of bands are associated with the amp, ranging from Guns N Roses’ guitarist Slash (who has his own customised set of amps), to Eric Clapton and Jimi Hendrix.

Early on, Marshall produced amps with a uniquely ‘aggressive’ tone thanks to their KT66 valve. Eric Clapton himself requested a combo amp with tremolo, leading to the creation of their first well-known variety: the Bluesbreaker. They then began to created huge Marshall stacks, which were employed by bands such as The Who, to give their instruments enough volume to fill the stadiums they often sold out.

Eventually, the KT66 valve became too expensive and they moved to the Mullard EL34 which furthered the aggression of the sound which impressed Jimi Hendrix. This era of Marshall become very recognizable thanks to their plexiglass front panel. Throughout the 70s, the brand grew further and they switched to using printed circuit boards rather than handwiring their amps. They also introduced the MV series, which maintained the overdrive that defined the Marshall sound while controlling the volume of their amps. Eventually, players realized that increasing the MV of the amps could provide a heavily overdriven wailing sound enjoyed by players like Zakk Wylde.

Soon came iconic amps like the JCM 800 and The Jubilee, further pushing the brand around the world, by this point becoming a staple in rock music, as well as defining the live sound of Guns N Roses through The Jubilee. The JCM 900 furthered the sound of Marshall amps, with even more distortion delighting the brands users. At a similar time (the mid 90’s) the first special edition model, the ‘Slash Signature’ was released.

In recent years, Marshall has moved into digital and solid-state products, which often aim to replicate their classic sounds in an easier to produce/cheaper to sell setting. Most of these attempt to bring the defining Marshall roaring sound to their tone. They have created a vintage series which reissues many of their early amps, while some of their digital products are the most forward thinking in the game.

In 2012, Jim Marshall died, yet his brand lives on as one of the most well-loved and well known in all of music.

What Should You Be Looking For In A Marshall?

Jim Marshall created the distinctive sizzling distortion and crunch after various guitarists approached him with the complaint that many amps available at the time didn’t have the right tone or volume. Be on the lookout for this unique sound when purchasing a Marshall. The brand covers all aspects of the market, with their valve amps best replicating this classic tone, but if anyone knows how to provide a high-quality solid-state replication, it is Marshall themselves, so don’t fret if you need to be on the lookout for the lower price range Marshalls. 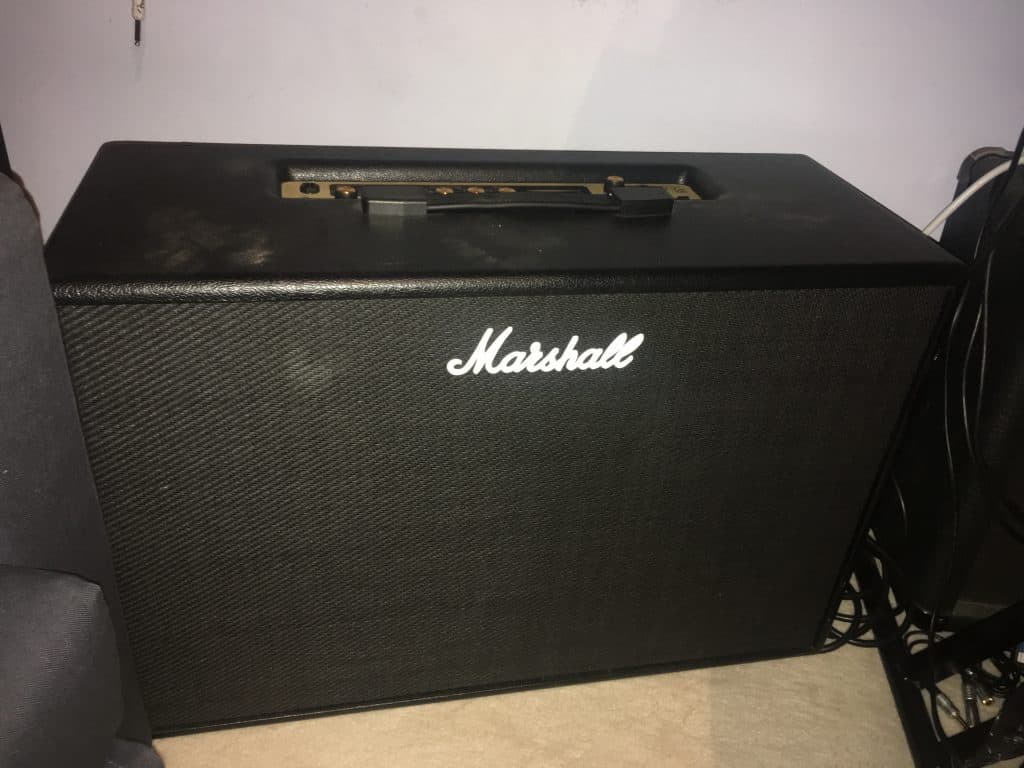 For a relatively competitive price, the Marshall CODE100 actually provides one of the best digital, modern, solid state amps around. It is a big, powerful amp that delivers a huge amount of volume and a wide range of sounds. The screen that sits atop the amp is built on a very user friendly interface with easy to turn knobs and clearly labelled buttons which allow you to switch between the amps many sound settings. Within these settings, customisation is encouraged. You can change the amount of distortion on a sound, add studio quality reverb types, add delay settings and of course edit the tone and EQ of any sound you’re producing.

The baseline presents that come from the amp are modelled on various interesting sounds, as well as multiple classic Marshall tones. If you’re a beginner who doesn’t understand what is happening in your amp, you’ll be delighted with the variety and quality, and if you’re a Marshall expert, you’ll be impressed with their delicate an accurate replication of sound. The follow are just a few examples of its replications: JTM45, 1959 Super Lead, 1962 Bluesbreaker, Silver Jubilee, JCM800 and JCM2000.

One of the more unique features the amp possesses is its USB connection which allows for updates and recording direct to a DAW. Furthermore, the Marshall Gateway app allows for editing away from the amp itself and can change settings you’re using as you’re using them. This system is a fantastic addition that gives an already user friendly amp and even high level of usability on top of its brilliant sounds. All of the connections are solid and sturdy, and it feels like a rugged and hardy piece of equipment that you shouldn’t have to worry too much about, despite its digitality.

This durable amp is a brilliant 100 watt tube amp that gives off a classic, loud and addictive sound. While they’re expensive (and hard to find) as new, these amps will go relatively cheap on second hand sites considering their value and impressive build. There is a lot of headroom at the top of the amps basic clean sound, which has a delicate and airy tone, and the simple but effective list of sound manipulators compliment the sound without overcomplicating it.

We switch to an overdriven setting that can be edited with a gain control, while simple EQ knobs allow for a classic control over the balance of your tone. You can connect the amp into speakers and give the already loud amp even more juice, while feeding its clean sound through a good effects pedal will give you a lot of control over your sound. Its first overdriven sound is a Marshall classic, crunchy and warm without moving towards extreme metal, while the second overdrive setting allows you to kick things up an extra notch.

While the amp is fantastic in a number of ways, it is a big and heavy beast which may make transport pretty hard, even though it is perfect for gigging. It also has a tendency to hum a bit, so feeding it through a more detailed EQ and a noise gate may be beneficial if recording from this amp. 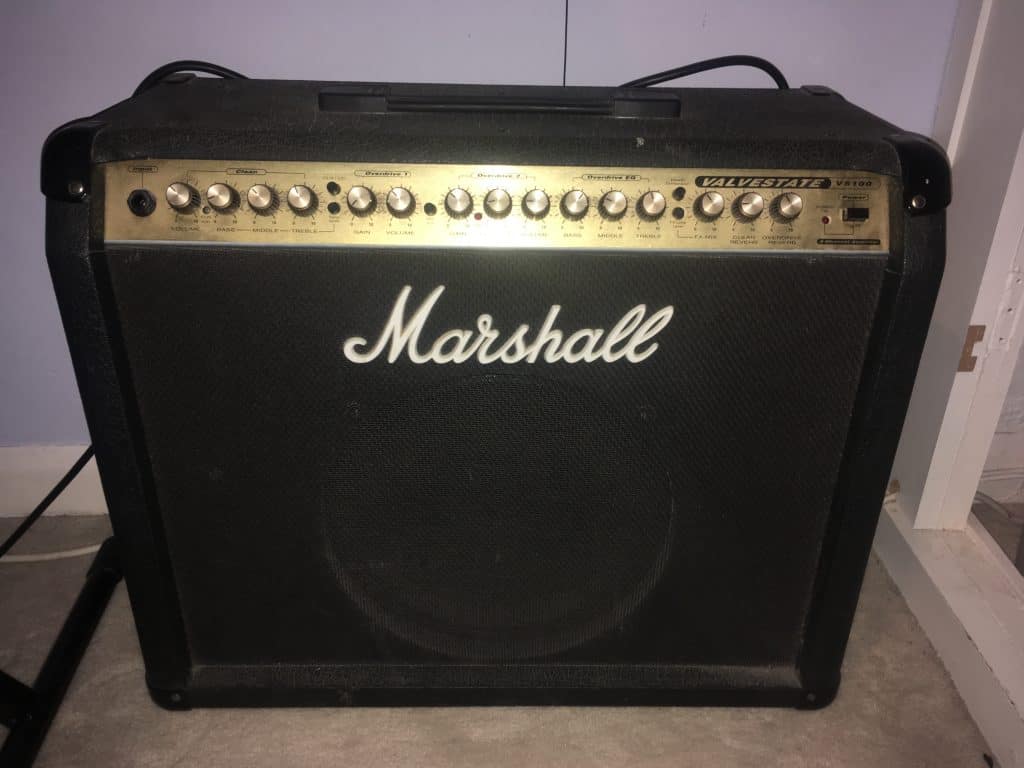 The Marshall MG GFX series of amps is designed to be able to replicate classic Marshall tones without breaking the bank. Arguably its most defining feature is its unusual analogue circuits which give a response and tone similar to that of a valve amp, while keeping the low cost and intricate customisation and modernity of a solid state.

This amp comes in both 30 and 50 watt versions, with the former only really working as a practice amp and the latter being versatile enough to make appearances at some smaller gigs. The amp has chorus, flanger, phaser, octaver and vibrato effects built in, while its delay has multiple varieties. These can be edited and saved to the amp to build your own custom pre-sets. There are also outputs for headphone practicing and an mp3 input, allowing you to play over audio tracks.

The four channels each provide uniquely fantastic sounds, with the clean setting being distinctly warm, the crunch giving off the classic Marshall tone discussed above, and the two overdrives providing two tonally different overdriven settings. This is a brilliant entry level amp that cuts costs while providing great sounds in a reliable setting.

This amp is one of the most beautiful pieces of equipment Marshall produce. It’s important to note early on that the original version of this amp is a collector’s item, and that this version is a reissue that attempts to follow on in its iconic predecessors’ footsteps. The three preamp tubes and four power amp tubes do most of the work in recreating the iconic sound of the original, and a simple setup of sound customisers make this amp a very quick one to get to grips with. Your EQ and overdrive settings are present, but without any sort of digital aspect here, you’ll have to add your own effects.

Thanks to the beautiful clean sound this amp provides, you’ll have an elegant bed of sound from which to create your own tone. However, this reissue doesn’t literally recreate the original and instead fixes some issues of the older amp, while replacing the two speaker jacks and output impedance selector in the original with five output speaker jacks. The lead channel adds even more to the sound of the amp, adding a crunchy Marshall sound that should be enough to convince you to snap up one of these amps in a second. There is a good level of sustain, with a great dynamic response that makes the amp feel like you’re an even better player than you already are. On top of its sound, this recreation provides you with your own, affordable, version of a piece of musical history. 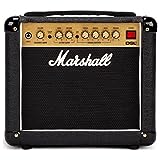 If you’re looking for affordability and quality to go hand in hand, this Marshall DSL-1 Combo amp can provide. With channels to accommodate clean, crunchy and distorted sounds and the ability to set gain and EQ settings, you can move between luscious sounds as you please. This tiny amp is great for practice as it is compact, and has the ability to be really quiet should you so require it to be. It also has the added bonus of being able to be hooked up to a speaker cab for live performances, though I wouldn’t really recommend this approach.

This amp will do well in all genres, but its crunchy blues-like lead tone is great for a powerful, emotional solo. Of course, you can connect it to a footswitch and various effects pedals for an even greater control of its tone.

If I had to recommend just one of these amps, it would have to be the Marshall CODE100, because it does it all. It is not only very affordable considering its quality, but the high level of customisation, avoidance of many of the usual problems solid state amps encounter, and perfect replication of so many tones make it a brilliant choice for beginners and professionals alike. Its user friendly interface and adaptability to the modern smartphone-oriented player make it an excellent piece. 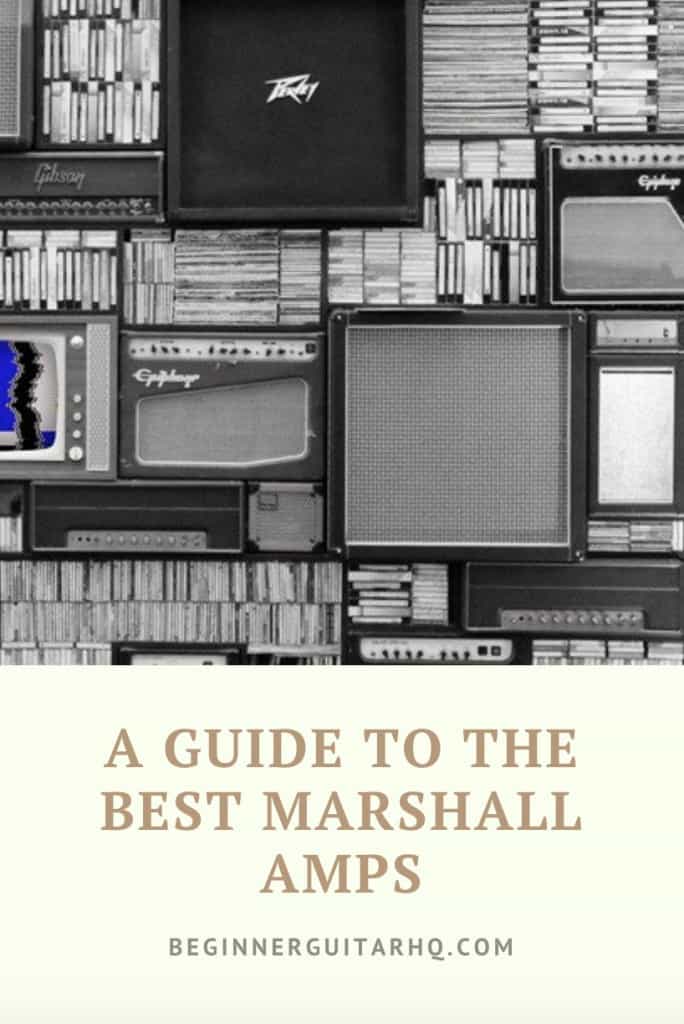