Tired of using the same old chords in your chord progressions? Then you’re in luck! Seventh chords, like our Bm7 chord, are excellent for applying a smooth, sophisticated and jazzy aesthetic to your chord progressions. More importantly, this chord is an easy one to pick up and add to your chord repertoire! As you read on, we’ll cover how to play the Bm7 chord and some music theory behind it, so you can apply it to other chords you wish to learn in the future. Let’s dive in!

How to Play the Bm7 Chord

One of the really cool things about the guitar is the number of ways you can play the same chord. We call these variations. A variation, not to be confused with an inversion, does not simply flip the chord on its head. Variations take the notes that form the foundational triad/chord and may flip them around, or stack one of the same notes enharmonically.

So, why should you use variations if they’re just the same chord? There are a number of reasons you might choose to use a different chord variation:

Your skill level as a guitarist. Some chords are just easier to play than others, which might be preferable if playing guitar chords is still relatively new to you. Especially if you’re trying to build up some confidence! It doesn’t hurt to challenge yourself from time to time, but in most cases, you want to play what you feel comfortable with.

Tonal qualities. As mentioned earlier, different from inversions, chord variations contain notes played enharmonically, thus bringing out different tonal qualities from one variation to another. Sometimes this can be a deciding factor, as one variation might even sound better than another within the chord progression.

Your personal preference. We all have our favorite chords, which may be dependent on any of the aforementioned factors. At the end of the day, there are no wrong answers, and you should play what you enjoy, or prefer!

Without further ado, let’s give our Bm7 and a couple of its variations a try: 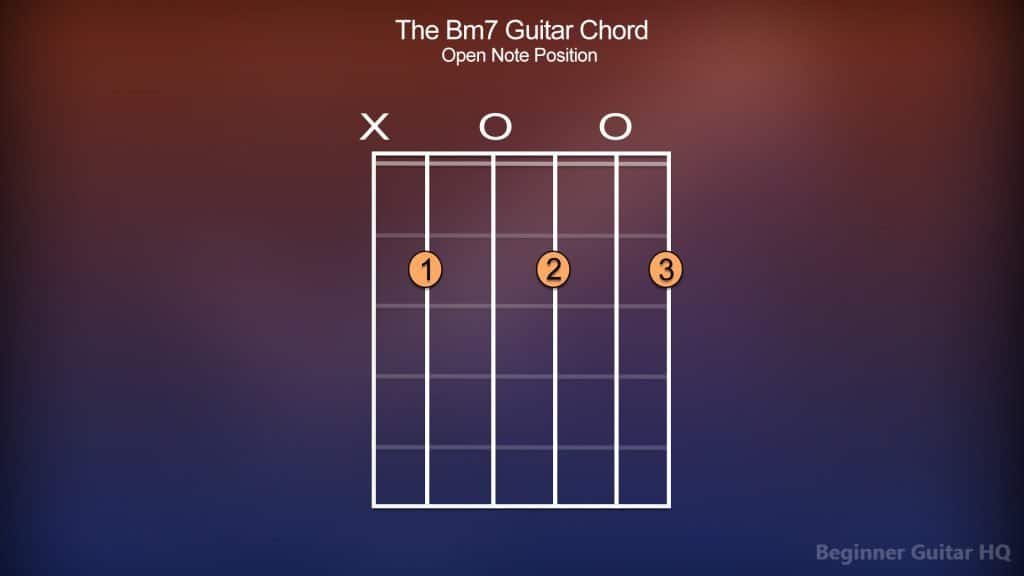 Chord chart of the Bm7 guitar chord, played from the open note position. 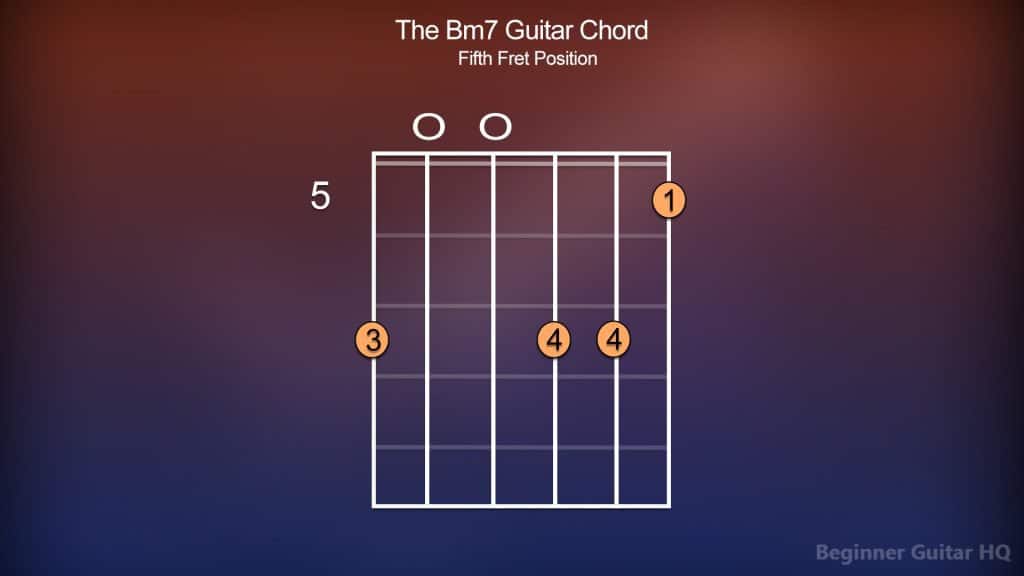 Chord chart of the Bm7 guitar chord played from the fifth fret position. 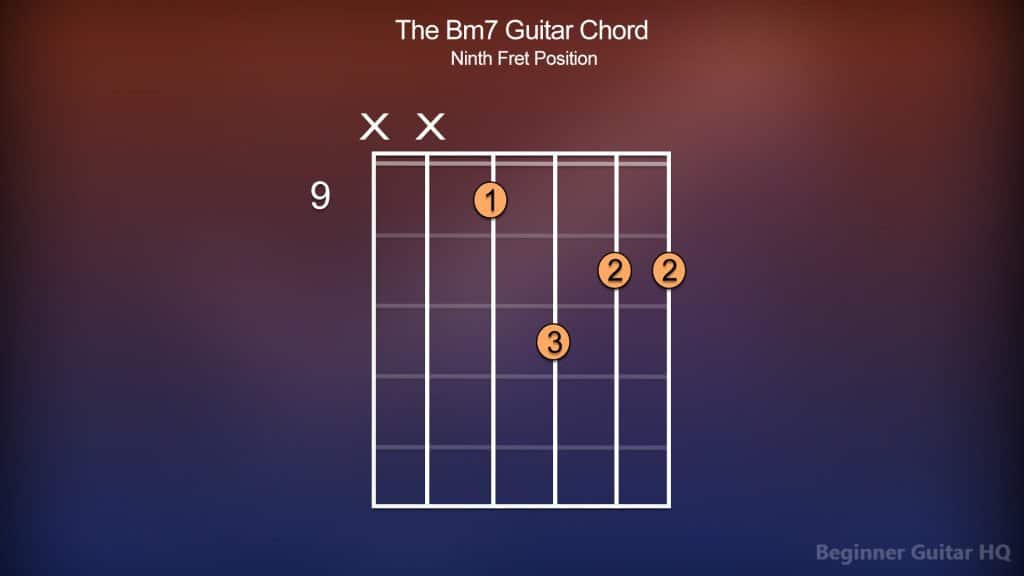 Chord chart of the Bm7 guitar chord played from the ninth fret position.

If this is your first time seeing a chord chart, you might feel somewhat overwhelmed just by looking at it. Don’t fret! The process of learning chord charts is a simple one, and will serve you for years to come!

Let’s first bring our attention to the big rectangular square, housing a collection of vertical and horizontal lines; this represents our fretboard. Each vertical line represents a different string on the guitar. From left to right, we have our low E, A, D, G, B, and high E strings. The horizontal lines, however, separate one fret from the next!

Bringing our attention to the top of the fretboard, you might notice an “O” or an “X” above the strings. If there’s an “O”, then you’re to play an open note on that corresponding string (a string to be played, but not fretted). If, however, there’s an “X”, then you’re not to play that string to complete the chord. To the left of the fretboard, there may be a number present; this indicates the starting fret for forming our chord. If there are no numbers present, then it’s generally implied that you’re starting from the open note position.

That’s all there is to it!

Breakdown of the Bm7 Chord

The Bm7 chord, also known as the B minor seventh chord, is one of many smooth and sophisticated jazz chords you can learn on the guitar! However, minor seventh chords like this aren’t just used in the world of Jazz music, but blues, neo-soul, and even hip-hop, where they are aiming to achieve a similar vibe. This chord may even be used to add an extra layer of tension to a chord progression, as many seventh chords are known to do. However, you might be wondering:

“What is a minor seventh chord?”

In a nutshell, a minor seventh chord contains a minor triad, with an interval of a minor seventh (m7) from the tonic, stacked on top. If that sounds confusing, don’t worry, we’ll cover it in greater depth!

To better understand our Bm7 chord, we should first come to understand three fundamental features forming the foundation around it: the key, scale, and the triad.

Let’s begin with the key. A key can be described as a grouping of musical pitches, no different than what you’d find in a scale. How are these musical pitches defined? That’s where our key signature comes into play. Every key has its own key signature. The key signature, visually represented by a collection of sharps (#) or flats (b), is often seen after the clef on a piece of sheet music. How do we know what notes are to be made sharp or flat? That’s where it can help to consult the circle of fifths. 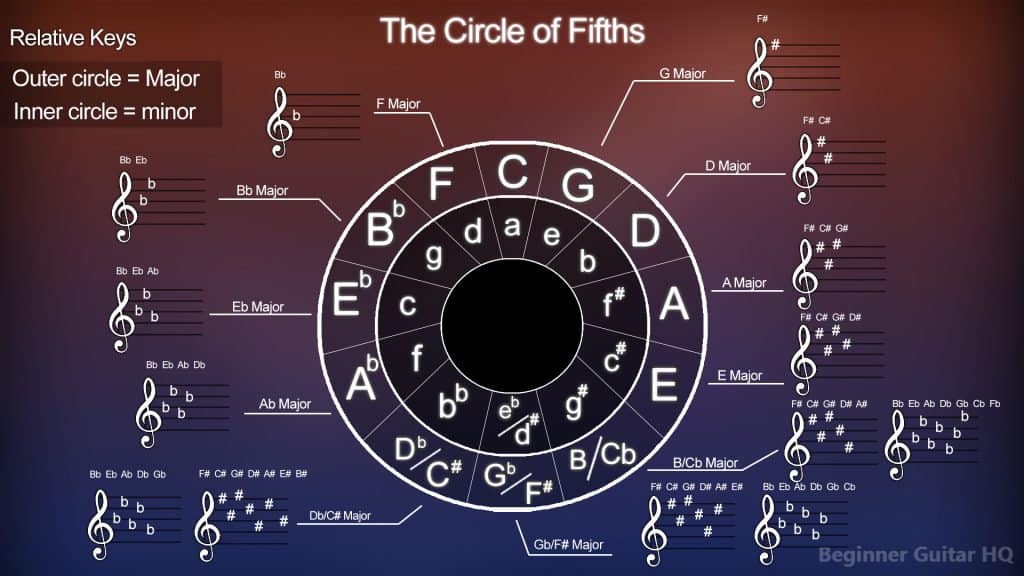 Diagram of the circle of fifths, displaying the most commonly used keys.

So, how are these sharps in our key signature determined? We use a simple acronym, FCGDAEB. This stands for:

The idea is that every first letter within each word is to represent a different note to be made sharp, following this sequence. Let’s take a look at how this sequence presents itself within the circle of fifths:

For instance, if we were in the key of F# minor, containing 3 sharps, using our fingers along with the acronym, we’d go, “Father, Charles, Goes” therefore, the sharps used within the key of F# minor are F#, C#, and G#. Let’s try another one, D# minor, containing 6 sharps. Using the acronym and our fingers once again, we’d go, “Father, Charles, Goes, Down, And, Ends” therefore, the sharps used in the key of D# minor are F#, C#, G#, D#, A#, and E#.

Since we’re on the topic of our Bm7 chord, we’d be in the key of B minor, containing 2 sharps, which are F#, and C#. With this information, we can now throw together our B minor scale:

Minor scales, like our B minor scale, have a strict pattern of tones (T) and semitones (S) that they always follow. This sequence appears as: 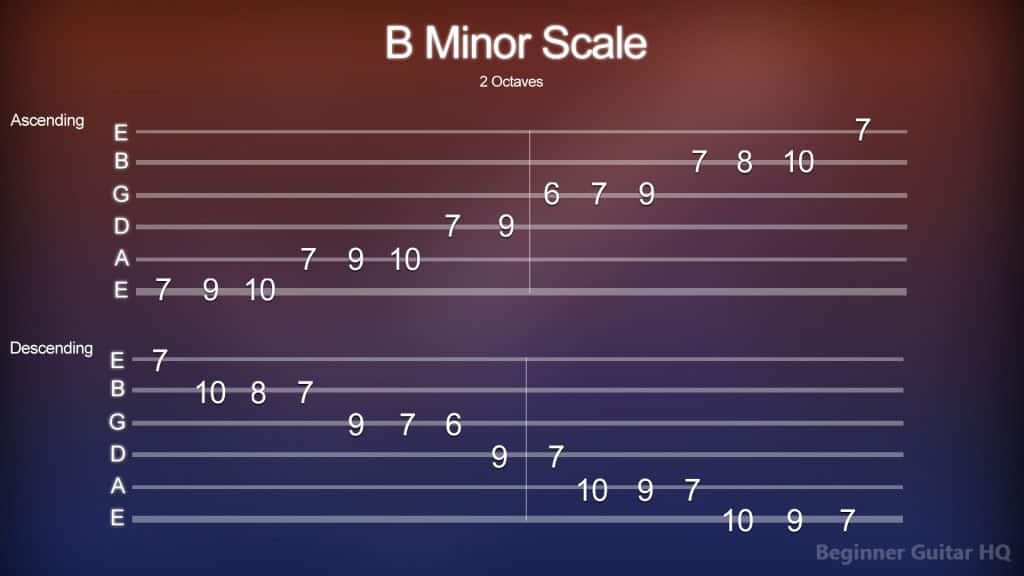 Guitar tablature of the B minor scale, ascending and descending.

Guitar tablature, also known as “tab”, is an excellent means for guitarists with minimal knowledge of music theory to write, share, and play some of their favorite songs and exercises. You might even look at tablature as a more simplistic alternative to sheet music, requiring no musical notation to be used.

That’s all there is to it!

Let’s talk about each degree in a little more depth. Our first degree, the tonic, is our tonal center, our home. This is our root note, where things feel calm, and tend to resolve after tension. The second degree, the supertonic, shares two notes with our subdominant triad, making it an excellent degree for adding tension and even substituting for the fourth degree. The third degree, the mediant, shares two notes with the tonic triad, which makes it an excellent degree for extending/drawing out the tonic. The fourth degree, the subdominant, is a tension-building degree, sharing a note with the tonic triad, B. The fifth degree, the dominant, is the most important degree next to the tonic. This degree is usually transitioned to following the subdominant, and typically resolves home to the tonic, as it’s typically the climax/peak of our tension. The sixth degree, the submediant, acts as a predominant chord, sharing two notes with our tonic triad, and our subdominant triad. Next, we have our seventh degree, the leading tone, important in forming our 7th chords. This degree holds a great deal of tension, in fact, try playing the C major scale and ending on B; your ears will want to hear it resolve to C. Finally, we’re back home to the tonic, just an octave higher from where we began.

A triad is a type of chord, containing three notes played in unison. Minor triads, in particular, require the tonic, mediant, and dominant notes of a minor scale (1st, 3rd, and 5th degrees) to be stacked on top of each other. To form a B minor triad, means we take the notes: B, D, and F#.

Minor triads contain specific intervals that give them their characteristically sad, and melancholy sound.

If we want to convert our B minor triad into a Bm7 chord, then we simply need to stack the seventh degree of the B minor scale on top of the triad. This will give us the notes: B, D, F#, and A.

Finding Chords Compatible With B minor

It can be challenging at times as a musician to create a chord progression from scratch, let alone one that we like! Thankfully, there’s a method to make this slightly easier. Making use of what we know about triads, we’ll be stacking them on each degree of our B minor scale:

These are all of our compatible chords within the key of B minor! However, while that might be useful, you might still feel somewhat “stuck”. In which case, it can help to look at some tried and true chord progressions/chord structures to pull you out of this “musician’s block”. Here are a few different structures:

We’ve covered a lot about the Bm7 chord, however, what about its major counterpart, Bmaj7? Well, firstly, it’s important to note the relationship between Bm7 to Bmaj7 is that of a parallel key relationship. This means that while they share the same tonic, they contain different key signatures. This differs from the relative key relationship that Bm7 shares with D major, where they contain different tonic notes, but share the same key signature.

Much like our minor scale, major scales also contain their own strict pattern of tones (T) and semitones (S). This pattern appears as:

When forming a major triad, just like we did with our minor triad, we take the tonic, mediant, and dominant degrees of our major scale (1st, 3rd, and 5th degrees) and stack them on top of each other. This gives us the notes: B, D#, and F#.

Major triads, slightly different from minor triads, contain their own specific intervals, that give them their characteristically happy sound:

If you wanted to convert your B major triad to a Bmaj7 chord, then as before, you stack the seventh degree of the B major scale on top of the triad. This gives us the notes: B, D#, F#, and A#.

Now, let’s try playing the Bmaj7 chord so we can hear the difference! 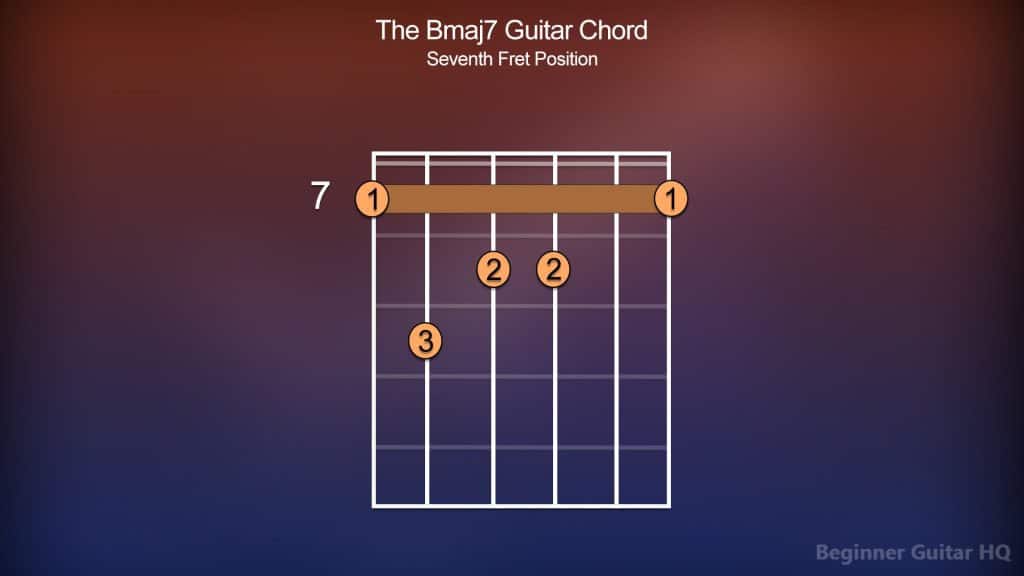 Chord chart of the Bmaj7 chord played from the seventh fret position.

The Bm7 chord can offer a lot of color and variation to an otherwise simplistic chord progression. It’s always recommended to broaden your horizons, adding new chords to your musician’s toolbelt. Furthermore, it’ll help keep things interesting and fresh, giving you more to strive for in furthering your growth as a guitarist!

How do you intend to use this chord? What other seventh chords will you try learning next? How will you choose to expand from here? There are many different ways you can choose to improve, whether that’s improving your fingerwork, or bolstering your fretboard knowledge, through the use of the CAGED system. The important thing is that you have fun, and try not to be too hard on yourself! 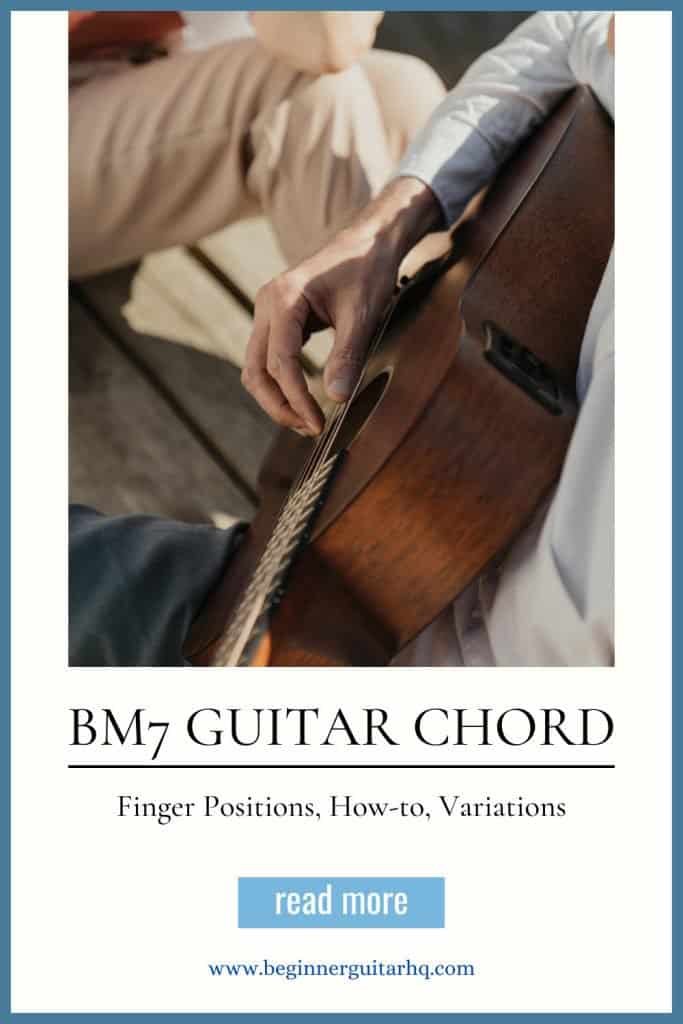