The textbook definition of chords? Basically a group of notes that gives a characteristic sound when played together. But music is not just about knowing a bunch of definitions. It is more about the subjective experience of each musician and listener. Every chord has a unique sound and will invoke different feelings in every single human being. Using different intervals between the chord notes will determine the type of the chord. All of these intervals add to the character of the chord.

There are many different types of chords and all of these chords can sound beautiful depending on the context. Some chords are more common than the others while some are rarely used. Some are used to spice things up and some are used for a satisfying resolution. When the chords are arranged in a specific pattern, they are called chord progressions and these progressions majorly define the mood and feel of the music. They provide the harmonic matter to the music that is being composed but can also provide melodic as well as rhythmic context.

So without rambling too much, let’s take a look at some chords that you can play on your guitar.

Power chords have been used extensively in many genres of music. But their most notable use can be seen in rock and metal music. These are simple two note chords and this is precisely where they derive their power from. These chords provide ample room for the melody.

Power chords are as simple as a chord can get. These are formed by adding a note with the fifth interval to the root note. Sometimes, the octave of the root note is added so as to give the chord a fuller feel.

Power Chords can also be referred to as fifth chords and symbolized by root note followed by a digit 5.

Eg: C power chord can be written as C5 chord.

Generally characterized as “happy chords”, major chords have been a part of music for centuries. But this happy or sometimes cheesy sound is the basic foundation and all other chords can be understood in comparison to these major chords. Also major chords don’t have to always sound happy. Depending on the context they can provide the melancholic feel to the music.

A huge number of pop songs are based on major chord progression. The chords built on the first, fourth and fifth note of the major scale are major chords and this I-IV-V progression is very common in many genres of music.

Minor chords are great tools and along with the major chords, form the majority of diatonic harmony. Minor chords can be built on the second, third and sixth notes of a major scale. That is in a C major scale,

Suspended chords or sus chords feel exactly the way they are named. With the major or minor third interval missing from the chord, these chords lack any concrete feel. Instead these chords sound dreamy and ambiguous. These chords can be very useful in conveying the nice but unsure type of emotions owing to their pleasant dissonance. These chords can be used as passing chords/leading chords to add some spice to the chord progression.

There are two types of Suspended chords.

When the third is removed from the chord, that leaves us with a power chord which can be in turn used to build following two types of sus chords:

Eg: a. C Sus2 is formed by adding a D to the C power chord making the notes: C-D-G

Now we are about to enter a juicy and spicy world of “jazzy” chords. Seventh chords are the most commonly used extensions of the major and minor triad chords. These chords are formed by adding a major or minor seventh interval to the major or minor chords. The addition of this seventh note destabilizes the triad adding a characteristic dissonance to the chord. The addition of the seventh interval is used to provide direction or a sense of pull towards the “home” chord. These chords were earlier used as an exception but with time their use has become much more common.

Depending on the type of triad that is being used and whether a major or minor seventh interval is added to the chord, we can get different types of seventh chords. The four most commonly used seventh chords are:

If you try to build major7 chord using any other root notes, at least one note will go out of the scale.

Here two notes G# and D# are out of the C major scale.

Eg: In C major scale, minor seventh chords that can be used are:

Dominant seventh chord is built by adding a minor seventh interval over the major triad of the chord. Dominant seventh chord can give a very laid back feel to the music. It sounds very jazzy but can prove to be very useful in many different genres. It can be also used as a tool during scale modulation to get a very smooth transition from one scale to another. In any given major scale, the Dominant seventh chords can be built over the 5th scale degree or scale note.

Eg: In C major scale, dominant chord that can be used is

The Diminished Seventh Chord is built by adding a minor third, diminished fifth and diminished seventh to a root note. Diminished seventh chord is often used to heighten the feelings of anxiety, passion or mystery. It is generally used as a leading chord which is borrowed from the parallel minor of a major key.

This chord is used widely in Classical as well as Jazz music.

Just like the name, add9 chords are nothing but a triad with an added 9th. The 9th is the same note as the second scale degree but an octave higher. Note that, if you also add a 7th to this chord then this chord becomes a 9th chord instead of an add9 chord. There are many types of add9 chords but the two most common types are:

Major Add9 chords are formed by adding a 9th over the major chord triad. These are beautiful chords and are generally used to start the chorus or a 9th note is added in melody lying on top of a major chord.

Minor Add9 chords are formed by adding a 9th over the minor chord triad. These chords sound beautifully dark and melancholic. Whole song can be driven by this single chord because of its unique structure.

Augmented chords are built by adding the major third and a sharp fifth to the root note. Alternatively, these chords can also be thought of as major chords with a sharpened fifth note. Augmented chords have unusual intervals and hence cause a feeling of uneasiness and awe in the listener. These chords can feel uncomfortable to the ears and for this reason precisely augmented chords can act as a mystery tool in songwriting. A songwriter has to be very careful while using these chords though as irresponsible use can feel quite irritating.

Augmented chords have been used time and again in genres like Jazz, rock and many more exotic types of music.

Diminished chords are built by adding a minor third and a flattened fifth also known as the diminished fifth to the root note. Alternatively these chords can be thought of as minor chords with flattened fifths. It is a dissonant chord and hence contains a lot of tension. This tension build up can be released by going to the home chord and this release is very satisfying to the ears. This chord is often used as a bridge to return to the home chord in a chord progression.

In a major scale, a diminished chord is built on the 7th scale degree/note to keep it diatonic to the key. This is not the most commonly used chord but if used wisely, it can give the effect desired across many genres of music.

Knowing chords is a good thing. Every guitarist keeps learning various chord shapes over their entire lifetimes. Afterall, more chords means better music right? Well, not really. Even though knowing chord shapes can come in handy in many situations like songwriting, jamming and live performances, it is not enough.

Knowing how and where to use these chords effectively is what matters the most. Also practicing the chord changes and trying to bring out the maximum emotion out of a chord is what should be every guitarist’s one of the major goals. Also try to create your own voicings of the chords which will definitely help you in becoming a better guitar player and finding your own “voice” on the guitar.

So what are you waiting for? Grab your guitar, choose some random chords from the above charts and start jamming. And most important of all- Have Fun! 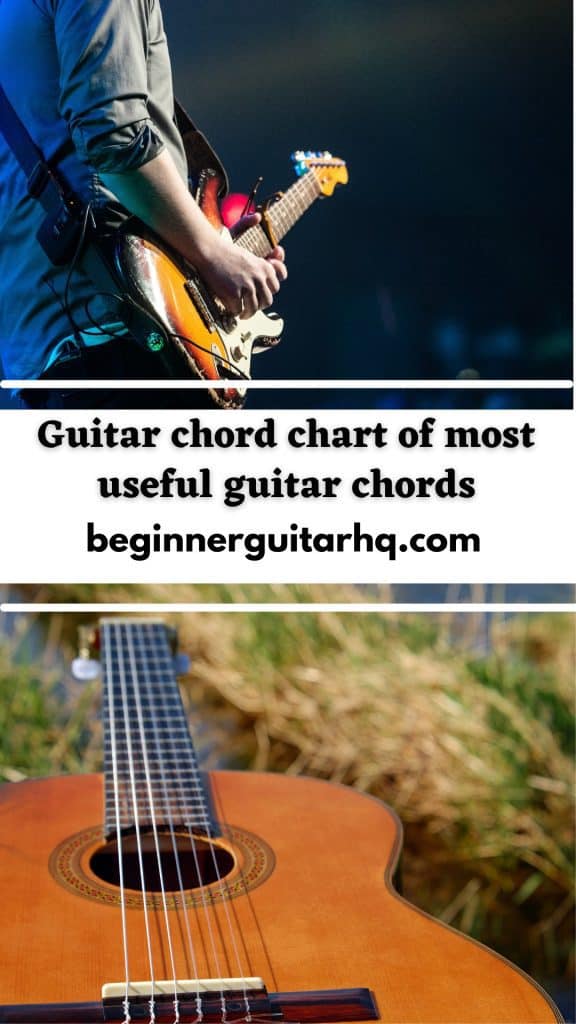