Ed Sheeran is the popstar who can do it all: prolific songwriter, accomplished vocalist, and unique and dynamic guitar player. Other than perhaps John Mayer, in terms of sheer raw talent Sheeran all but eclipses his pop companions. Here is a man who sells out stadiums; with just his guitar and loop pedal. And not only that, he does it multiple nights in a row, all over the world. Take Wembley Stadium in the UK as an example. It seats around 60,000 people, and he sold it out three nights in a row. Alone. That’s a staggering 180,000 people in three days. There aren’t many other examples of pop artists who can come close to doing something like that, especially not solo with only an acoustic guitar as backing. And he does it all because of a mastery of both the loop pedal and rhythm guitar technique.

Ed Sheeran was by no means an overnight success; he worked hard and steady at his craft and grew his following grass roots style with year after year of relentless busking and touring. It was this non-stop touring which he says left him very little time to audition and rehearse a band. The shows kept getting bigger, his popularity kept rising, and he stuck to his winning formula of guitar and looper.

This is a big part of what informed Sheeran’s guitar style; the fact that he had to learn to entertain big audiences without drums and bass to back him up. And although he is mainly known for his smooth voice and endearing songwriting, his guitar playing is largely underrated.

Sheeran is far more than your average rhythm guitar player. He uses loops, percussive sweeps and rakes, and gentle fingerpicking to create a dynamic and ever engaging bed on which to lay his lyrics and catchy melodies.

No matter your opinion on Sheeran’s playing or music, make yourself comfortable and take some time to watch this compilation of live performances, it’s sure to convince you he deserves a place among the best entertainers in the world. 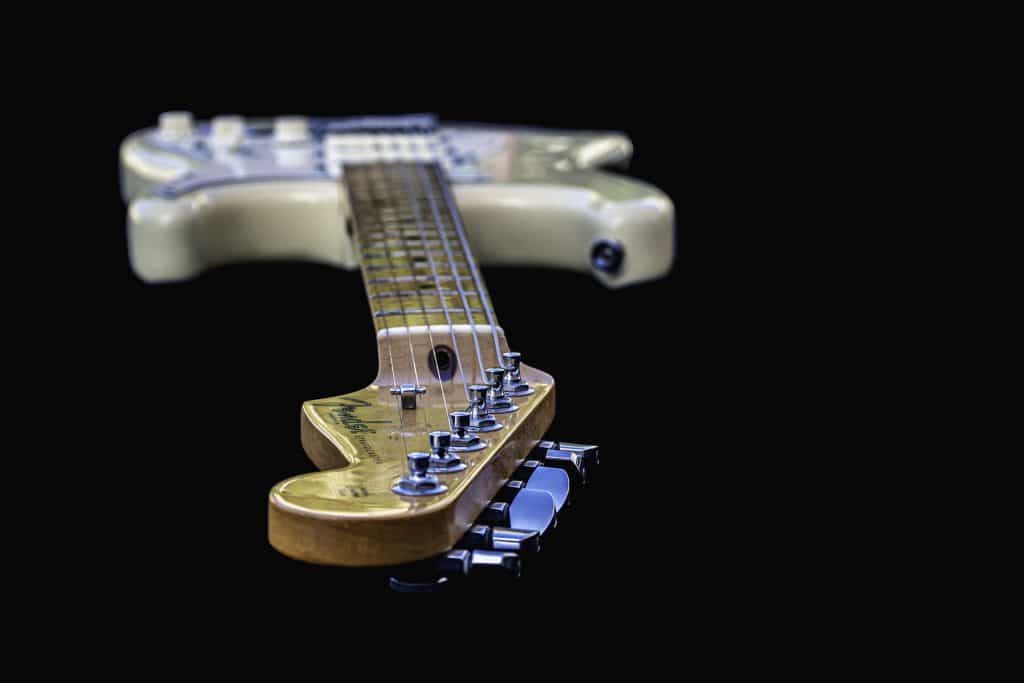 He has his own signature model: the ‘Martin Ed Sheeran 3 Divide’, based on the small-bodied Martin LX-1. 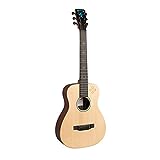 The guitar is a fishman-equipped acoustic-electric, with custom inlays of artwork from his third album ‘Divide’. He also plays a signature-model Lowden guitar. The ‘Sheeran Series’ features 8 different models in two body sizes, and all are more toned-down bare-finish’ bodies as opposed to his insignia Martins.

Ed has sometimes hilariously been accused of lip-syncing or using backing tracks; there are ignorant people at shows who have no understanding of what he’s doing. The technique they are mistaking for miming is called live looping, which is a method of recording a phrase of music and then playing it back real-time. This is most easily done with a loop pedal, but can also be achieved using a computer and specialized software. The recordings are triggered and stopped by using pedals at his feet.

In this video he shows how its done, layering guitars, beats, and vocals to create a track:

Sheeran started out his looping career using the Boss RC-30, but now uses a custom made loop pedal. This is what makes his usage of the loop more dynamic and unique, as the custom pedal allows him to loop both his guitar and his voice whilst controlling both with his feet. He has an additional microphone setup alongside his main vocal mic, which is connected to the pedal. He can then easily switch between looping beats, guitar riffs, and layering vocal harmonies.

In more recent shows he also uses a keyboard, to record and loop the catchy hook for songs like ‘Shape of You’:

So how do you loop multiple tracks, without having to get a custom made pedal? The best option out there is the the Boss RC-300. This pedal boasts 3 different tracks, and an expression pedal to control channel volumes and effects.

There are three main techniques Ed uses in his guitar playing: basic strumming and fingerpicking, raking and tapping with his fingers, and beat-making on the body of the guitar. All three are simple enough to get a basic grasp of on their own, however to combine the three and then add in a loop pedal, a fair amount of practice is needed. With time and dedication, creating basic layered tracks becomes second nature.

Imagine playing a phrase, but ending the recording ½ a second too late. The phrase will play back completely out of sync. Now imagine your starting/stopping of the phrase is perfect, but your timing during the playing wavered and you speed up towards the end. Now when the phrase starts to loop, it will sound as if it slows down when it begins again. Even if you’re not Ed playing a stadium and having the mistake reverberate around in front of 60,000 people, these are both areas of timing that need to be mastered in order to loop effectively and smoothly.

The real unique quality of Sheerans playing lies in his rhythmic strumming. This is his real strength as he is foremost a singer/songwriter, and doesn’t play much, if any lead guitar. He uses these complex rhythms as base layers for loops, as well as to add interesting light and shade elements into his songs. Again, these kinds of rhythms require a mastery of timing, which can be learnt by combining the techniques above, and with basic ‘up/down’ strumming exercises.

Here are a few very simple ones to get you started. Each are done in 4/4, with the left hand muting the strings to get more of a drum sound than a melodic sound. The big arrows indicate an up or down strum on the beat, while the small arrows are strummed between the beats, on the ‘and’ count.

Try the patterns slowly at first, and then gradually speed up.

Eg: ONE and TWO and THREE and FOUR. 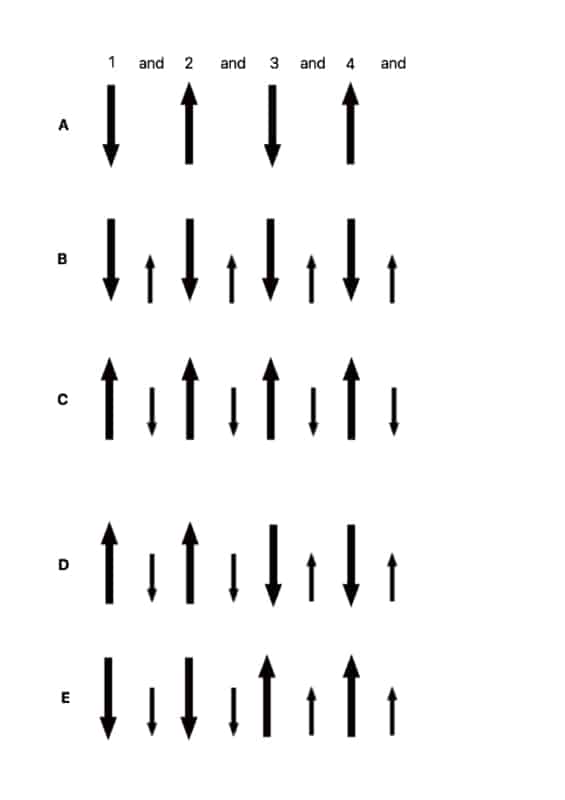 Once you get familiar with these patterns, try writing out some of your own. Try different combinations of Up and Down strums, and different time signatures like ¾ or 2/4. Then try adding in 8th or even 16th notes at a slower tempo. Now experiment with all the variants you can come up with; use a pick or just fingers, with chords or just muting, solo or with a loop/backing tracks, and try playing along with a few of Sheeran’s tunes. Check out some beginnerguitarHQ strumming articles to get some more ideas.

Sheeran uses fairly standard fingerpicking technique in his playing. If you are completely new to the fingerpicking style, some classical techniques are a good place to begin. Or, have a listen to players like Tommy Emannuel, he is one the best in the world and will provide you with endless inspiration.

Here is a very simple exercise to get you started with fingerpicking, using C and Am.Initially, try playing each pattern for 4 counts, very slowly.Then when you feel you are comfortable with them, start speeding up and adding in some other chords.

Here are examples of basic tablature for the intro’s of two of Sheeran’s most popular songs, ‘Bloodstream’ and ‘What do I Know’. Both have unique and interesting picking patterns to learn and practise with.

This song is Standard Tuning, with a capo on fret 1.

The last section is a stretch for the fingers, take it slow!

What do I know:

Although Sheeran is not an outwardly ‘virtuoso’ guitar player, he can definitely hold his own in the world of rhythm guitar. He has carved out his own unique niche with his mastery of the loop pedal, and creating layers of percussion-rich pop music that gets fans dancing and singing, and inspiring countless others in the process. He’s proven that you can do it all on your own without the need for backing tracks or even a band.

With a basic understanding of rhythm, timing, fingerpicking technique, and looping, you can easily start your journey to playing in the style of Ed Sheeran. 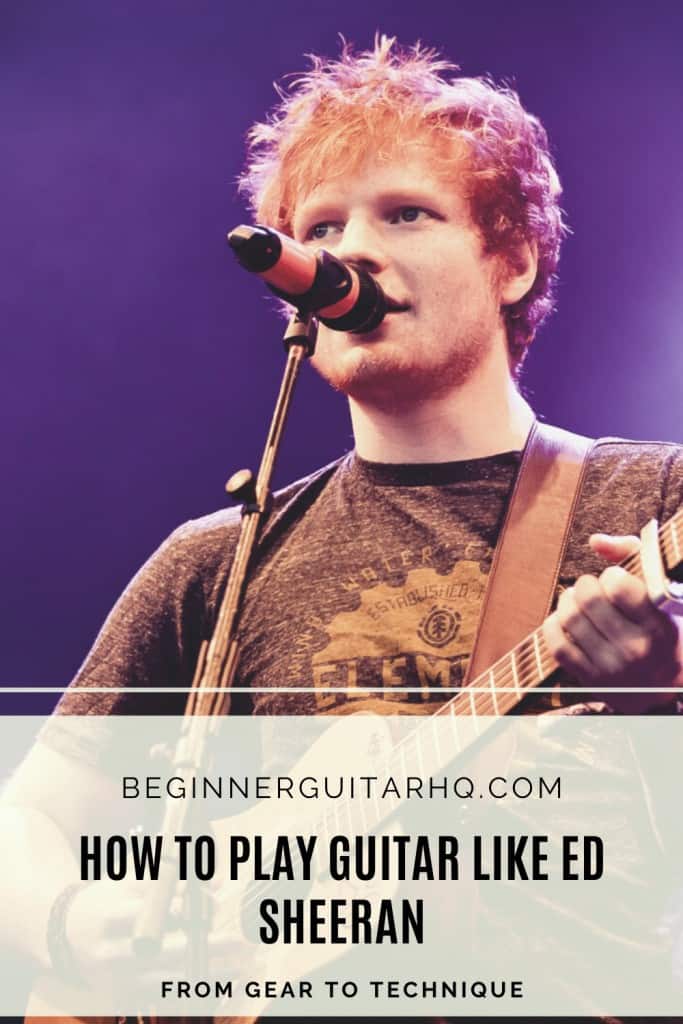