Mark Tremonti is a Grammy-winning guitarist/songwriter, and one of the most influential rock musicians of the 21st century. He is a lead guitarist of Alter Bridge and his solo project, Tremonti, and has been formerly known as the lead guitarist of Creed. He released 14 studio albums from 1997 until now, with the three mentioned bands. He falls into the category of the modern hard-rock/alternative metal guitarists, but he draws a lot of influence from other genres, such as thrash metal and post-grunge as well.

From lightning-fast legato runs and melodic solos to jaw-dropping riffs, he established himself as one of the leading rock guitarists and quickly became recognized for his style and sound. If we were to describe it to somebody who has never heard of Mark, it would probably be a combination of James Hetfield and Slash, with a soft spot for some commercial-sounding stuff as well.

But what makes him sound so good that it almost doesn’t even matter what he plays anymore? 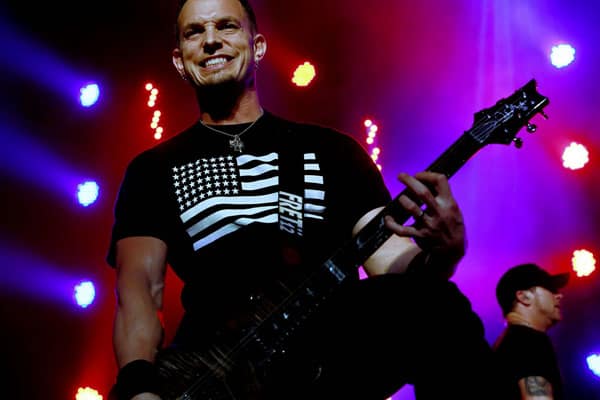 We won’t be focusing too much on how to get his exact tone. It can be described as a very aggressive and distorted rhythm tone, but not with too much gain. Instead, he focuses on dialing tighter bass frequencies for better palm-muted chugs. His signal is very compressed, and doesn’t take too much of a frequency spectrum on the rhythm channel. This is due to him always having another guitar player in all three bands so far. But his tone is still massive on its own! 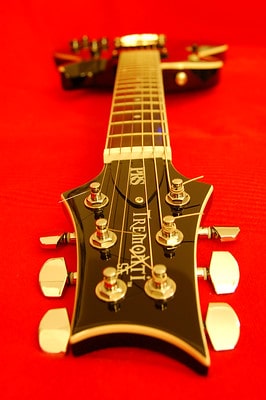 Now, this man definitely doesn’t like standard tuning. In over 100 songs on 8 albums from this decade, he only used E-standard tuning once!

Let’s see what he uses instead:

He also uses other tunings as well such as Open G, but these four are his primary ones, and they are found on over 90% of his songs.

We know that you don’t want to look at a lot of theory, and we won’t be focusing on it, besides just briefly explaining what he does and why he does it. Mark primarily uses the pentatonic and natural minor scale, and almost all of his songs are in the key of his open 6th string in the given tuning, mostly minor with some occasional major tonality.

But his playing is much more than that. He likes to borrow different notes from other scales. Such as major 3rd  and flat 2nd , which can be looked at as a Phrygian Dominant scale.

While this scale is found in a lot of Mark’s solos, he doesn’t necessarily drop his signature pentatonic and natural minor foundation, but rather just add on to that.

He uses a lot of simple diatonic chords, such as octaves, but likes to spice it up with some drowning pedal tones from open strings as well. Below is Mark’s probably most signature chord ever. Just strum it yourself, and you will instantly recognize Tremonti’s vibe just from this one.

From a theory standpoint, his playing is very simple and straightforward, but it’s his technique, dynamics and sense of rhythm that makes it very musical, melodic and expressive. He further expands on this by choosing to accent certain parts in his lines. 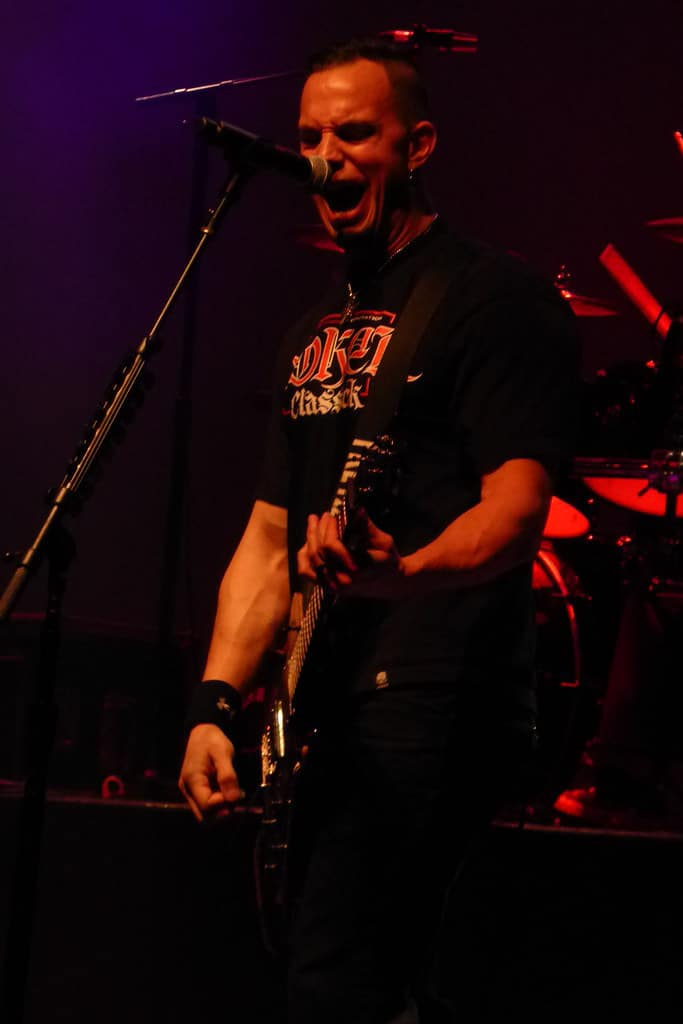 Remember the thrash-metal influences that we mentioned earlier? This is where they come in. Mark’s rhythm is mainly focused on two things. This would be the precise aggressive right-hand technique, and a mixture of both down-picking and alternate picking as well. And the second, highly recognizable trait of his is palm-muting and gallops (triplets) to get more percussive sounds.

These two techniques are then additionally expanded using simple fifth power chords with the root notes on 5th string while adding open 6th string palm-muted notes for heavy grooves. He also uses a lot of variations of power chords, inverting them or adding certain notes for different sounding power chords, or even simply expanding them to more than just two or three strings, for wider and more powerful sound.

Below is the rhythm riff, which is almost identical to the opening lead line. This riff starts at 0:09.

First lick is played three times consecutively, while the second lick is played after the third time to resolve it. This pattern repeats through the verses as well, but Mark plays it with palm-muting during the singing parts in those verses. Bold underlined notes are your flat 2nd  intervals, just to showcase its usage. Keep in mind that this is the Drop Bb tuning that we were referring to in the beginning. Although, in this case, it’s only 6th string that is down-tuned, while everything else stays in correlation to standard tuning. Adam Jones of Tool sometimes uses this tuning as well!

Again, Tremonti simply loves his open 6th  string, and he uses it whenever possible. He incorporates this with certain notes from the chords in his harmony or following a pattern similar to vocal melodies within the song. This is often done in combination with palm-muting.

His solos are just, well, perfect. It’s rare to find a guitar player these days whose solos are simple, yet they musically reinforce the story that is being told within the song. And they do it in a very pleasing and melodic way. If you were to take any of his solos and try to change it to fit the song better, you simply can’t do it. His solos always serve the song as perfectly as possible. In the end, it’s what guitar solos are all about, right?

We already said that he likes his pentatonic scale, and he regularly uses this pentatonic box-shape around the 12th fret, shown in the tab below.

This allows him to smoothly play three-note-per-string legatos, and utilize all open strings as well. He rarely, if ever, uses any of the “flashy” techniques such as tapping or sweep-picking.

But there are two signature traits that make his playing really recognizable. First are the syncopated double-stops which he uses to fill up the gap between two parts of the composition.

We can spot this in Alter Bridge’s song “Buried Alive.”

The first line is this repeating motif that closely follows rhythm guitar. Second line, however, starts with a series of tremolo flutters, and just after the end of that line, he has enough time to hit this syncopated part (bold underlined notes) with a muted note that comes right on the last downbeat of this section. It’s a bit hard to hear it at first, but it’s there when you pay attention. This is a very common trait in his solos, and it’s a subtle, but very important detail. If you look closely, this section of the solo is completely within the pentatonic box that we mentioned above.

And his second signature trait is his ability to anticipate bending the note at the end of a bar. He would often come from a flurry of 16th  notes in legato fashion, just to finish it off on a slow, massive bend with a lot of vibrato as well. This is what creates that “epic” culmination moment in his solos!

Let’s take a look at “Cry of Achilles” solo, so that you can perfectly understand what we want to showcase.

We have not tabbed it, but prior to this finish, there are a series of insanely fast alternate-picking sweeps, coming to these last two lines. He plays these three quick pre-bends, then a full bend with release, a small filler line and finally, puts a glorious exclamation point (bold underlined notes). And he holds this bend exactly until the end of the bar, right before jumping to the song outro. 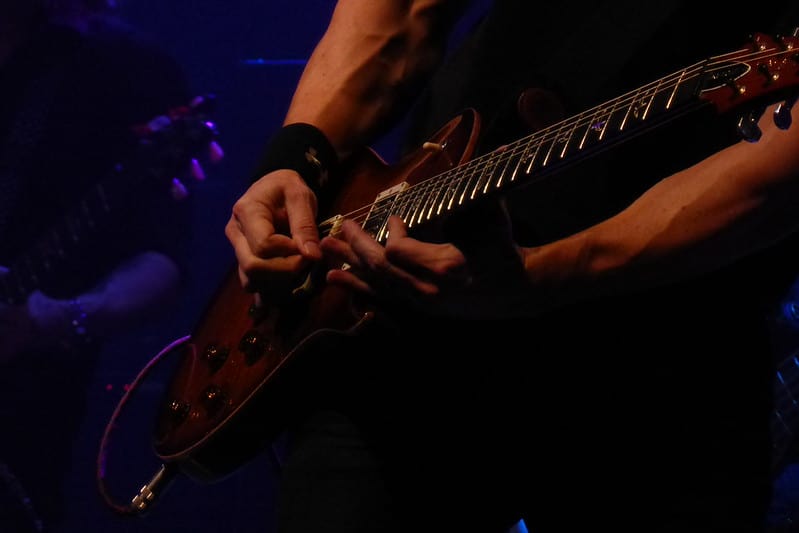 While playing solos, he tends to support the pick his with middle finger as well for better control and more economic alternate picking

While Mark may be known mostly for shredding and metal riffs, he actually plays a lot using his fingers as well. He mostly uses this style of playing for semi-clean or acoustic intros/outros of the songs, and some verses as well.

He employs a simple pattern where thumb plays drowning bass notes, while other fingers are used for playing melodies on top.

This is best shown in the song “The End is Here.”

This is the very intro of the song. Bold underlined notes are your bass notes, while the melody is basically descending down the natural minor scale, but plucking both e and G string (in this case full-step down as d/F respectively) to create octaves. It is also a very nice way to start practicing finger-style guitar, if you are new to it.

This song really showcases all of his essential guitar techniques. And who is going to teach you better than the man himself?

If nothing else, Mark Tremonti is certainly the proof of how hard work pays off in the end. Also, he has won many different awards for his guitar playing in recent years. Three consecutive “guitarist of the year” awards by Guitar World magazine. In 2011, Total Guitar listed him as the 4th greatest heavy metal guitarist of all time. Also, in 2011, Guitarist magazine named the guitar solo from Alter Bridge’s song “Blackbird” as the greatest guitar solo of all time, which is performed by him and Myles Kennedy.

And just recently, Guitar World named him as the No.1 guitarist of the decade, and his guitar solo from Alter Bridge’s song “Cry of Achilles” as the greatest guitar solo of this decade as well! 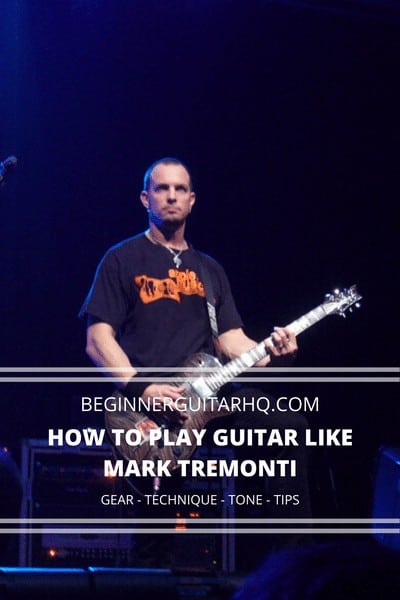