You’ve been playing guitar for a while now. You know your basic chords and scales. You’ve even memorized a few songs to whip out at parties. But now you’re looking for a new challenge. In this case, it might be time to unlock some alternate tunings.

Most popular guitar songs are written in standard tuning. From the 6th string to the 1st string, your strings should be tuned to these notes –– E A D G B E.

The good thing about standard tuning is that you can play songs in any major or minor key. But the downside is that you have to memorize dozens of chord shapes across the fretboard. Some of these also involve a giant stretch across 3, 4 or even 5 frets! Not ideal, especially if you have small hands.

This is where open tunings come to the rescue. These types of alternate tuning produce either a major or a minor chord when you strum all 6 strings at once. To fret your other major or minor chords, all you need to do is barre your index finger across the strings. Piece of cake!

Aside from Open D, Open G is the most popular of these tunings. Its unique sonic possibilities make it a favorite with slide players especially. You can also find it in fingerpicking and strumming styles like blues rock, alternative, folk and Hawaiian Slack Key (where it’s usually called “Taro Patch” tuning). 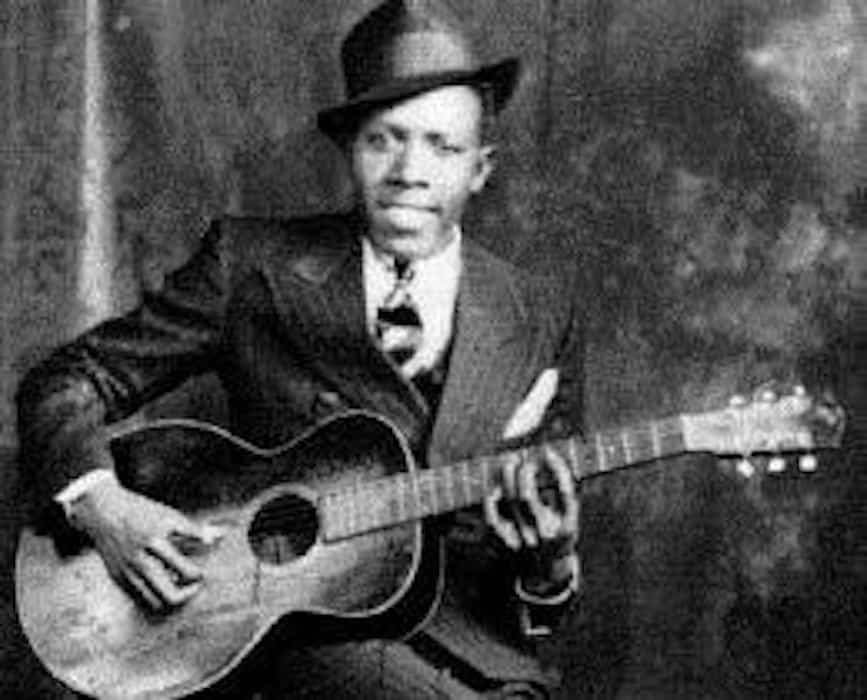 Delta blues legend Robert Johnson was a big fan of Open G tuning. It also features in many songs by The Rolling Stones, Led Zeppelin, George Thorogood and the Destroyers, Joni Mitchell and The Black Crowes.

This guide will help you learn essential chords and scales in Open G tuning. We’ll also look at some popular Open G songs you can add to your setlist.

Let’s start by looking at the most common form of Open G tuning –– D G D G B D.

Here’s a breakdown of the changes from standard tuning: 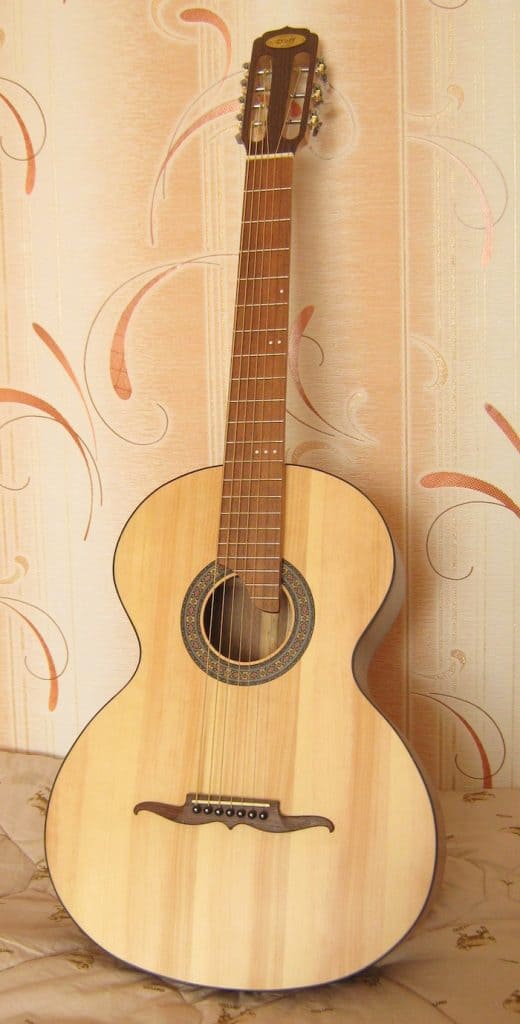 For easier minor chord voicings, some guitarists modify Open G to Em7 (or G/E), with the notes E G B D G B. But for now, we’ll keep it simple by sticking to D G D G B D.

On a final note, you can use any of these variations to access other open tunings, like A (capo on the 2nd fret), B♭ (capo on the 3rd fret) and so on. 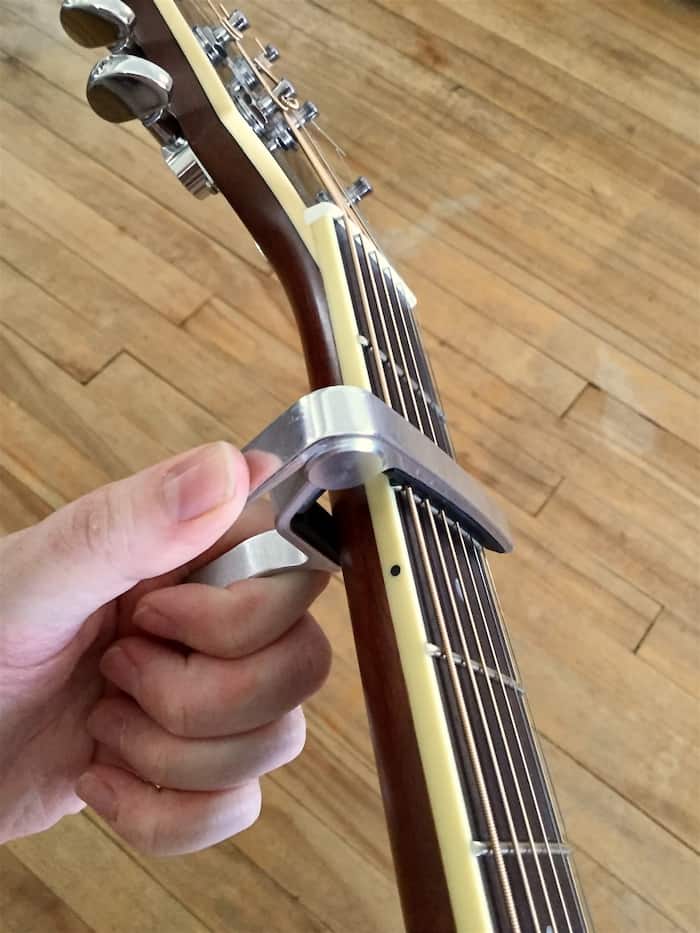 Whenever you change out of standard tuning, it may take some time for your guitar to adjust to the new tension on the neck. Don’t worry though. You’ll just need to re-tune a bit more often for a day or so.

Many players who use alternate tunings prefer to buy medium gauge strings (also called 11s, for electric guitar). They’re harder to fret than your standard lights. But they also cut down on the fret buzz that comes with downtuning (and therefore loosening) your strings.

Still struggling with fret buzz? You may also want to adjust your guitar’s action (the distance between your fretboard and strings). A higher action means you can press harder on your strings and still maintain a clear, strong sound.

Once you’ve tuned up and adjusted your strings/action, let’s move on to the basic chord shapes you’ll need to know…

If you’ve only played in standard tuning, learning new chord shapes in Open G may seem intimidating. But don’t sweat it! You can fret almost any chord triad as a moveable shape with a 5th-string or 3rd-string root note. You can also learn some open voicings for easy chord changes at the 1st-4th frets.

First things first, you’ll need to memorize the notes on your new low G (5th) string. This is easy if you’ve already memorized the notes on your mid G (3rd) string in standard tuning. Or, you can think of the notes in your standard A string, then shift everything up by two frets.

Because the lowest note is a D, most guitarists mute the 6th string when they play. Otherwise, your moveable barre chords would all be in 1st inversion, with the 5th note of each chord as the bass note, followed by the root and the 3rd. For example, when you play all 6 open strings, you technically get a G/D. This chord has a note order of D-G-B order instead of the standard G-B-D.

There’s nothing wrong with playing chords in 1st inversion. However, they sound a bit muddier and more ambiguous than root position chords. So for ultimate clarity, mute the 6th string with the tip of your finger whenever you fret a 5th-string root chord.

When you play a moveable major chord in Open G, you’re actually playing a single 3rd note, plus two root and 5th notes at different octaves (pitches). For example, from the 5th to the 1st string, the C major chord (C-E-G) includes the notes C-G-C-E-G. But for a focused, treble-heavy sound, you can play around with major triads by using only the 3rd-1st strings.

The three types of triads are: 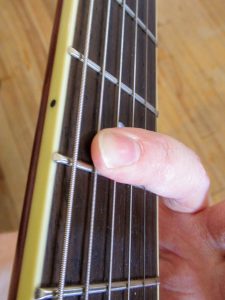 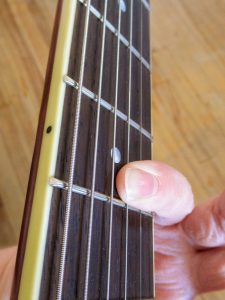 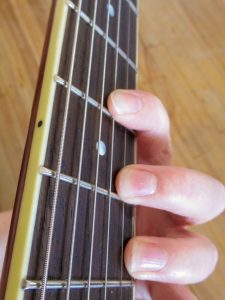 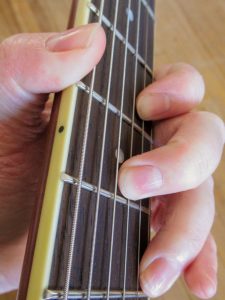 Minor chords are slightly trickier than major chords, thanks to the ♭3rd note. For a 5th-string root, you’ll need to barre (or individually fret) the 5th-3rd strings and shift your index back one fret on the 2nd string. If your fingers are flexible enough, you can add your little finger to the 1st string. Or, you can mute it instead.

Here are the adjustments to turn your major triads into minor triads: 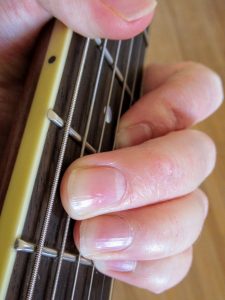 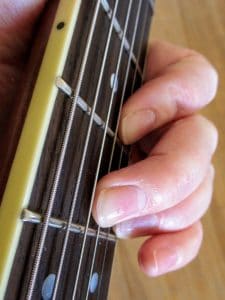 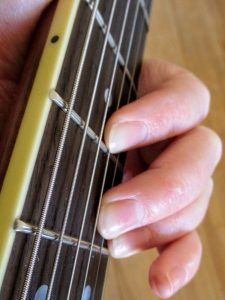 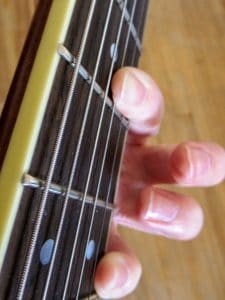 You can also incorporate open strings into your moveable majors and minors for interesting extended chords. For example, you can turn your C major chord into a Cadd9 by releasing your fingers from the 3rd and 1st strings. If you slide this shape down to the 3rd fret, you get a B♭6. If you slide it up to the 7th fret, you get a Dadd11. And so on.

For minor versions of these chords, move your finger back one fret on the 2nd string. 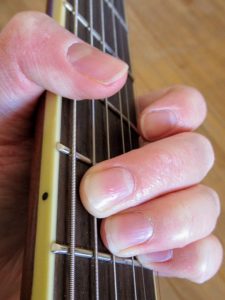 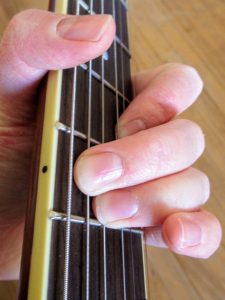 These moveable extended major (left) and minor (right) chord shapes can jazz up any standard triad by adding extra notes from the parent scale.

Some other common moveable chords are: 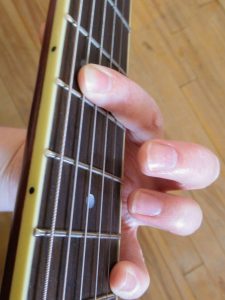 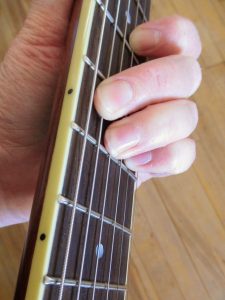 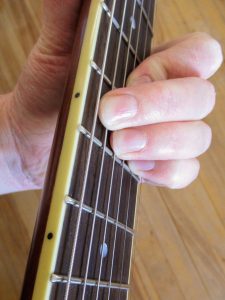 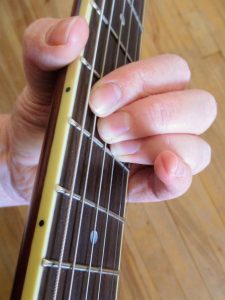 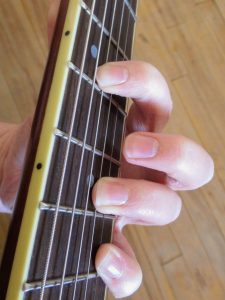 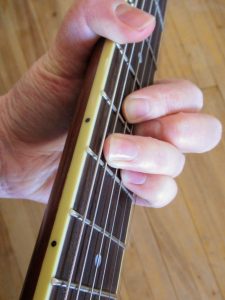 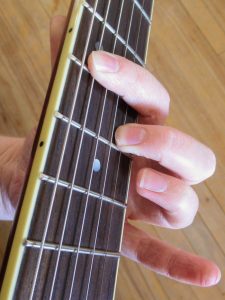 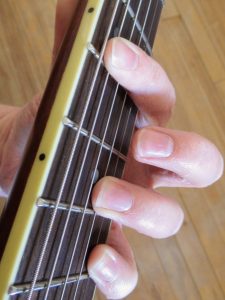 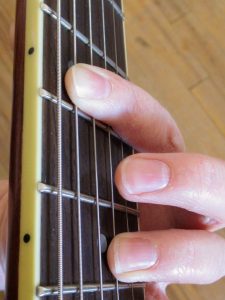 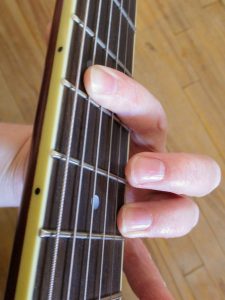 In Open G tuning, most guitarists like to stick to moveable chord shapes. They’re easy to memorize and –– with a few exceptions –– easy to fret. But open position chords can also add variety to a progression.

It would take forever to list all of the chords you can play in Open G. So instead, we’ll look at the ones you’re most likely to come across.

Most G-root chords can be played the same way as the moveable shapes, treating the nut is the barre and adding the proper voicing below it. But there are some exceptions…

You can also play an open G major by adding a finger to the 5th fret of the 1st string. This gives you a pleasant, treble-heavy tone.

Other popular Open G chords include:

Just like in standard tuning, you can play Open G major and minor scales (and their variations) at different positions around the fretboard.

For an upbeat pop, rock or country solo, you might want to use the G major pentatonic scale instead. These five-note scales remove the tense 4th and 7th scale degrees from the major scale for a streamlined sound. Blues and jazz guitarists also add a dissonant ♭3rd note to the major pentatonic to create the major blues scale.

The G major pentatonic scale, ascending. For the G major blues scale, add the 3rd fret of the 6th and 4th strings.

To improv over a G natural minor scale, you’ll need to flat the 3rd, 6th and 7th scale degrees from G major. Minor pentatonics (aka the quintessential rock scales) skip the 2 and ♭6, while minor blues scales also add the ♭5 note.

The G minor blues scale, ascending. For the G minor pentatonic, skip the 6th fret of the 5th string and the 2nd fret of the 2nd string.

Using your 5th string as a guide, you can slide these patterns up the neck to play any scale. For example, you could start at the 2nd fret for an A-root scale, the 5th fret for a C-root scale, and so on.

Another cool thing about Open G is that you can easily play a D major scale, starting on the 6th string. It uses all the same notes as G major, but raises the C to a C♯.

The D major scale, ascending. Except for the note changes on the 6th fret of the 5th string and 2nd fret of the 2nd string, it is remarkably similar to a G major scale.

Again, you can use your 6th string as a guide to shift this D major pattern up the neck and play other scales.

Now that we’ve got the essential chords and scales out of the way, here comes the fun part –– learning songs.

I find that the best way to get started is to work out some easy 3- or 4-chord songs with moveable Open G voicings. To make things even easier, let’s start with a few songs in the key of G major…

This lesson covers the iconic slide guitar parts from Muddy Waters’ “I Can’t Be Satisfied”.

“Start Me Up” and “I Can’t Be Satisfied” can be played in your regular D G D G B D tuning. However, Pearl Jam guitarist Mike McCready uses Joni Mitchell-style G G D G B D tuning on “Daughter”. Technically, you can just mute the 6th string and stick with the normal Open G tuning. But it sounds a lot more authentic with a G note in the bass.

For a super easy Open G riff, check out this lesson for “Daughter” by Pearl Jam.

Some other well-known Open G songs are:

“Walkin’ Blues”, “Ain’t No Rest for the Wicked”, “Twice As Hard” and “In My Time of Dying” are solid practice options for slide guitar. The others use fingerstyle patterns.

As a beginner, it’s tempting not to venture too far beyond standard tuning. But trust me –– it’s worth it to learn some basic chords, scales and songs in Open G.

Personally, I never tuned my guitar to anything beyond Drop D or Hendrix tuning (E♭ A♭ D♭ G♭ B♭ E♭) until I had been playing for almost 10 years. But I wish I had been more adventurous. For one thing, it would have made learning slide a lot easier. I also wouldn’t have wasted so much time trying to transcribe songs like George Thorogood’s “Bad to the Bone” from Open G into standard tuning.

Even if you’re not interested in essential Open G genres like blues slide, Hawaiian slack key or Russian folk music, it’s still an incredibly versatile tuning for Western rock and folk subgenres. Plus, once you’ve mastered Open G, you’ll find it easier to get started with other open tunings, like D, C and DADGAD (which is basically a Dsus4).

Who knows? Open G might just become your new favorite. 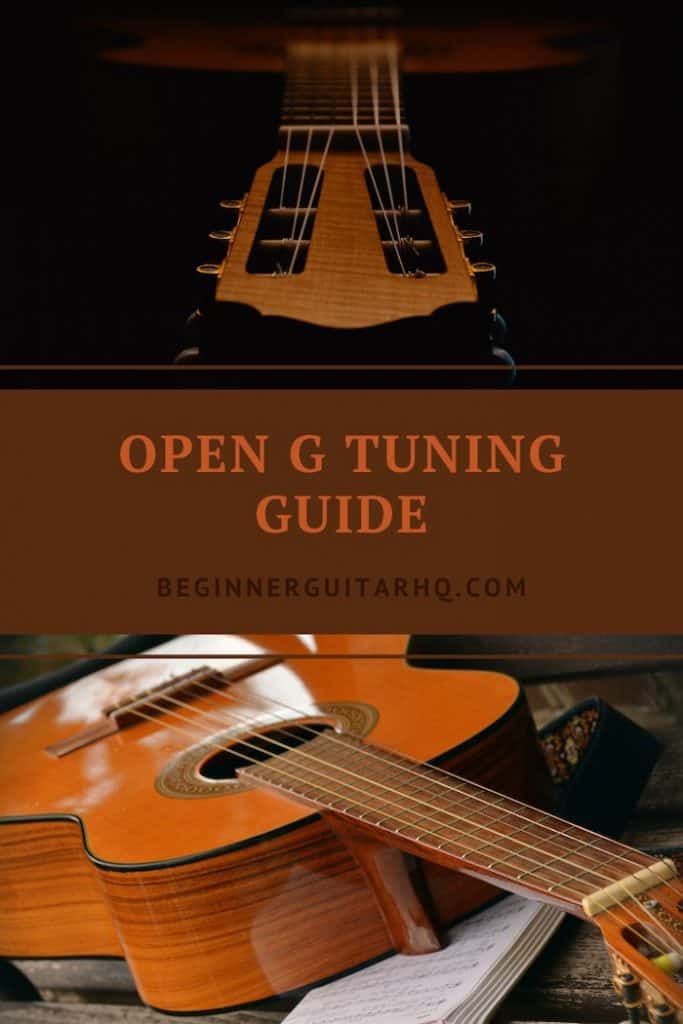