We’re here to take a look at the MXR Fullbore pedal, one of the most popular and sought-out stompboxes for metal genres.

The Fullbore is about offering harsh and heavy sounds, which is something every rock musician will need during their careers.

While there’re plenty of fans for the country, clean, jangly, and twangy guitar sounds, there’s a whole market for the mean musician.

That’s where the Fullbore comes into play, as a creator of grit that’s always in stock and sells for a mid-price tag.

Full disclosure: the MXR Fullbore gets a bad reputation on the internet. I’m here to showcase both its shortcomings as well as its advantages.

As we’re entering the metal domain, let me point you towards our recommendations to build your gear.

Those of you not satisfied with the distortion channel of your amplifier should seek an aftermarket guitar distortion.

The MXR Fullbore brings a big bite and goes for heavy metal musicians. If you’re playing metal genres like deathcore, death metal, grindcore, progressive metal, thrash, black metal, or similar, the Fullbore is the kind of device you need.

As a distortion pedal, it’s capable of delivering a huge distortion while operating with almost zero noise.

Distortion is a serious matter. Achieving hard-clipping effects on high output without losing the quality of your guitar’s sound is no easy task.

The Fullbore can do it, though. Even if you don’t have active, high-output humbuckers or a strong preamp, this MXR distortion pedal can make your humble guitar break some windows.

Overall, the Fullbore is a small pedal with six knobs plus a couple of buttons. While it looks bigger on the website and promotional material, it has the size of a standard guitar pedal or, more specifically, the size of MXR’s own Phase 90 phaser/flanger.

As for the knobs, the Fullbore offers volume, frequency, and gain at the top of the pedal. The lower side offers low, mid, and high knobs for a fully-fledged 3-band EQ.

Then, the two buttons activate the noise gate plus the mid-range scoop.

Let’s first talk about the upper knobs, which are Volume, Frequency, and Gain.

These are familiar settings on any amplifiers, so they may feel right at home with you. That’s especially true if you already own a decent amplifier.

The Frequency and Gain knobs are crucial for the pedal, and they are fairly easy to figure out. The first knob controls the amount of attack or distortion you’re adding into your tone. You can swing the knob to the right for a full bite, thus granting less presence for mellow tones, cleans, and subdued sounds.

Then, the Frequency control works alongside your 3-band EQ (low, mid, and high). It works as a tone knob that further tweaks the sound you configure through the rest of the knobs, which grants you a vast amount of versatility to venture into other rock genres.

The brand recommends turning the volume, and, and bass of your amplifier down before turning the pedal. The sound it creates sounds like a demonic storm of doom and destruction, so please don’t mix it with another distortion channel or powerful equalizations.

That said, the Fullbore pedal has a very fat sound. It increases the bottom-end frequency of your guitar, so I’d advise you to practice at home before taking this baby to the stage.

Even in humble settings, the tone it offers is edgy and thick. It sounds like Metallica’s last album, Hardwired to Self Destruct:

Or maybe like James Hetfield’s initial riff on St. Anger (I know, not a good example):

Either way, the Fullbore creates a dirty, woody, and thick sound. It might be hard to use at first, though, but with the extra EQ settings you have plenty of room to play.

Amateur musicians might not know the first thing about balancing a sound, so low-mid-high knobs could be overwhelming.

Overall, these work similñar to the 3-band EQ you would find on your typical amp:

The included manual has great explanations of each knob and has some solid advice on how to use them.

Overall, the 3-band EQ gives you the ability to configure the frequency you like. You can make your guitar sound fatter, brighter, or rounder. I’d advise leaving the amp EQ in a neutral space (with all of the knobs or sliders in the middle), and then mess around with the Fullbore’s EQ section.

The Noise Gate is a simple feature. You only push the button to clean the noises out of your guitar. It can even clean excessively noisy single-coils and erase hums and buzzes.

Next comes the Mid-boost. It simply adds more attack to the mid-range frequencies. That means extra power without adding any unnecessary bass or treble. Right at the mids is where you would want your rhythm guitar to be.

Just with these two buttons, this pedal offers a lot of range as it allows to accommodate a wide range of guitars and sounds.

Essentially, the MXR Fullbore features can get you great metal tones with its full array of settings. Don’t be afraid to experiment, though, because it’s easier than you might think.

Here’s a video showcasing how the pedal behaves:

If you take the backplate off with a screwdriver, you’ll see a small gate trigger control you can also adjust with the tool. Use it to adjust the sensitivity of the noise gate. Lucky for you, it seems it ships with the ideal configuration right out of the box, but you can up the trigger a bit if you have low-output pickups. You could also turn it down if you like Dimebag Darrel dirt.

A quick note: the MXR Fullbore also features a true bypass. That means the pedal won’t destroy your signal chain when it’s on, as long as you don’t play it. In other words, it won’t add noise, interference, or clipping into the signal.

Also, it’s an analog pedal, but I bet you could already tell. I mean, it’s not a multi-effects pedal.

Regarding the build quality, the MXR Fullbore features the brand’s classical metal chassis design. On that matter, the stompbox is as solid as you would expect, but it’s also light, portable, and capable of fitting on small pedalboards. It’s a standard-sized pedal though, not a tiny stompbox.

You can feel confident about its sturdiness as well. It can survive falls, trips, abuse, and harsh trips, and it will last for years without affecting its sound. I’m also sure that you can smash it against the wall to no avail.

As far as operation goes, the pedal needs a 9V battery or the included AC adapter. The AC adapter is a better option as the pedal burns batteries faster than any other. Overall, the MXR Fullbore doesn’t sound like a boutique distortion pedal. It’s not a premium item because it doesn’t want to be. Instead, it offers plenty of options, a 3-band EQ, and plenty of tonal shaping.

On the downside, every sound the pedal creates generally scoops the mid, even if you don’t push the button. That makes it a bit annoying, as it might not be the sound everyone is looking for.

For example, mid-scoop options are not very popular. They can easily destroy the sound and thus are dangerous options for beginners.

Other than that, it’s still a fun pedal, but far from being the best distortion pedal, you’ll find. Then again, for the price it sells, it presents a formidable option.

However, if you’re looking for a versatile distortion pedal that works on, say, classic or ‘80s, this ain’t it chief. The MXR Fullbore is about delivering no-nonsense metal tones, and it does as well as it could with its mid-tier price point. But there’s not much else to it, really.

Now, remember how I said the Fullbore gets a bad rep? Here’s a video showcasing the matter:

I suggest setting your amplifier on clean and subtle EQ settings before engaging the distortion. If you add amplifier distortion or overdrive, you will make the guitar sound very muddy, and so no one would understand a single note of your tasty guitar riffs.

Some settings like low gain can make the pedal sound more like a fuzz pedal or an overdrive, which gives you some freedom to experiment – but not too much.

You also need to be careful with the midrange scoop, as well as the mid EQ knob. Erasing the mids delivers thick, hardcore sounds, so bear that in mind. Then, going for high sounds delivers shredding sounds, and lowering the sound turns your guitar into the sludge industrial factory. If you set everything to 4, though, you can’t go wrong.

Remember the midrange scoop cuts the mids to boost high and bass sounds, so it’s an intense effect. Then, the frequency knob mostly alters the character of your mid sounds. You can turn it up for brighter mids, or turn it down for lower sounds. Similarly, you can move the mid knob to boost the guitar itself.

I’m not saying you can achieve something like James Hetfield’s tone on S&M 2, but you can get close with the Fullbore.

Otherwise, you can push the gain to its maximum and add just enough frequency to awaken the Gatekeeper and stand trial against the Ancient Gods.

Here’s a demo of the pedal so you get the idea:

Lastly, increasing the gain knob further and you can get vintage metal sounds, something Devin Townsend or vintage-inspired players like Steven Wilson would get.

In essence, the MXR Fullbore shines and falls flat at the same time. Its greatest strength (easy to tweak and acquire full-metal sound) is also its weakness. As much as it can imitate Metallica-like sounds, it can only do that. Or, to a wider spectrum, play Lamb of Gods, Black Dahlia, Protest the Hero, Cannibal Corpse, Pantera, Dethklok, and similar.

Either way, if you’re looking for specific tones and boutique sounds, there’s not much to be had here. The Fullbore by MXR will override the sound of your guitar, so you might not also want to pair your expensive ax with this pedal.

I can point you towards other options. For example, there’s the affordable and yet coveted Rat distortion pedal, which is about creating soon-to-be-dead ‘80s rock tones. If you’re a vintage rocker, a G N’ R lover, the Rat might be your best bet: 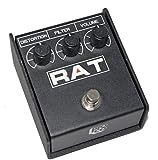 Another reliable option is the EHX metal-muff pedal, which adds extra thickness to the classic Electro Harmonix’s Big Muff lineup:

The Acapulco Gold, by Earthquaker Devices, is my favorite distortion pedal. It’s affordable and super-straightforward with a single knob. And yet, it delivers a premium sound that still retains the quality of your guitar. 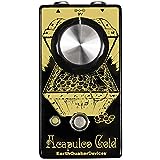 For all else, check the MXR Fullbore if you’re a dead-set metal guitar player trying to achieve ultra high-gain sounds with a lot of attack…but small doses of tone. Because of that, it’s a great companion for budget guitars not boasting incredible humbucker pickups.

In conclusion, the MXR Fullbore pedal erases all subtlety and diminishes both your guitar’s tone and versatility. In return, it delivers the early-to-modern metal sounds with all of the versatility you need to play with the extra “oomph” you can get with a pricy amplifier.

For metal players, the MXR Fullbore is a must. For all else, check our review of the other top distortion pedals for metal.