Today, we’re taking a look at the Boss CS-3 compressor and sustainer pedal for electric guitar. The CS-3 is one of those models that grant Boss such a high reputation, and we’re going to see why.

Boss is one of the top-tier companies regarding guitar and bass pedal effects. Their reputation doesn’t come with a premium fee, though, as Roland’s subsidiary continuously targets the mid-priced segment.

That said, the Boss CS-3 is another mid-priced pedal with the typical Boss layout and construction. It comes in a blue aluminum chassis, packs four knobs, and delivers two effects on a single enclosure. 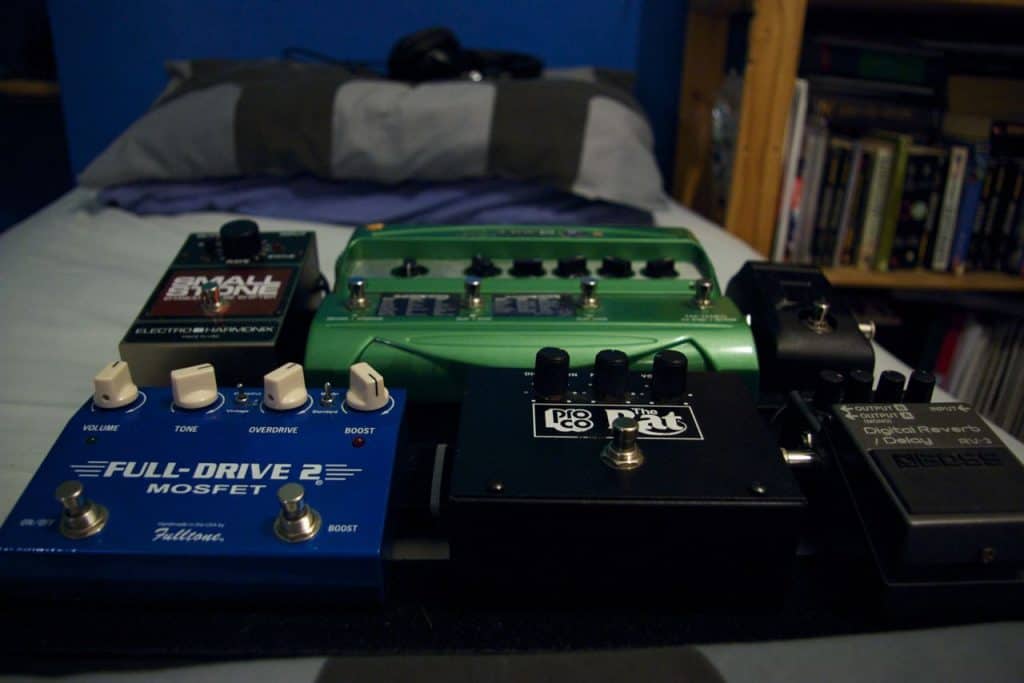 What is a compressor pedal?

Compression is one of the most popular effects for recording music. Its job is to even the dynamics of your playing, thus making the loud parts as audible as the soft part.

It’s not an effect for every music genre (for example classical music or jazz), but it’s perfect for most mainstream styles, metal, and rock genres.

In other words, when you play the quiet parts, the compressor can boost the output to make it more present in the mix. Then, when you strike the strings with extra force, the compressor pedal can make the sound smoother so it blends better with the rest of your playing.

By evening out the dynamics, a compressor pedal has some extra additions:

Because of these qualities, the compression pedal is a necessity for the studio and professional players. The ability to even out your dynamics is priceless, as no one in this world could play a whole song with equal strength on the strumming hand.

Once again, I repeat: the compression pedal can make the difference between an amateur and a pro.

Compressor pedal on the signal chain

Most guitar players place the compressor in the first position of their signal chains. They can also go right after the EQ and boost pedals, and before distortion, overdrive, fuzz, or modulation effects like a delay.

The trick is getting the compressor to work on the clean tone before sending the signal through anything else.

Lastly, let’s check the controls of compressor pedals, as the Boss CS-3 follows a standard layout.

The typical compressor has four knobs:

Here’s a further tutorial video on how to use compressor pedals:

Why should you use a compression pedal?

While we’re at the intro section, I need to add something. Both compression and sustain are underrated and underused pedals by amateur and intermediate players. Fun stuff like overdrive and reverbs tend to come first.

That’s because compressions are not strikingly fun. These are subtle effects that nonetheless produce a stellar result (more on that later). They can be the difference between pro and amateur playing.

Let me tell you, though, that a compression/sustain should be one of the first pedals you buy. If money is limited, you could go around with a single compression pedal and rely on your amplifier’s overdrive/distortion channels (use a footswitch for a fast channel swap).

Here’re are some good amps before we go on:

Here’s a guide on compressions by Rick Beato, a music producer managing a YouTube channel full of incredible insight:

There’re many reasons why Boss has such a reputation. One of those is iconic musicians like Kurt Cobain rocking on their pedals (in particular, the Boss DS-1).

Another reason is their mid-tier and properly fair prices. Their stompboxes come with a forever-lasting quality, plenty of versatility, and strong circuitry.

Boss’s renowned built quality is worthy of amateur and professional players alike. There’s more quality to have by paying more, though, which are “boutique” pedals tailored for audiophiles and specific players. However, searching for more delivers diminishing results after the $100 mark.

The Boss CS-3 compressor pedal lives up to the brand’s name, and it can certainly live to your expectations.

The Boss CS-3 sells for a mid-level price but behaves as both boutique and budget pedal.

With plenty of tone-shaping options, a good value, and Boss’ compact construction, the CS-3 presents a lot of value for the money.

Add the natural, analog sound coming out of the CS-3, and you’ll get the “boutique” sound many are looking for.

We’re looking at the third reiteration of the Boss Compact series (after the CS-1 and the CS-2), which adds a tone knob plus the already included tone, attack, and sustain knobs.

As it is, the Boss CS-3 can go from mild compression to subtle compression. It also allows you to sculpt the note with the sustain knob.

With its four-knob layout, the CS-3 stompbox has more versatility than the price range should allow. That makes it an all-around, competitive guitar effect pedal.

As I stated before, we’re looking at four knobs at the layout. Moreover, these knobs don’t have double functionalities like other Boss pedals, so expect no extra EQ section on the CS-3 model.

Here’s a rundown on what you have:

The tone knob is a bit tricky at first, as it means the pedal won’t affect the entire tonal spectrum of your guitar.

As such, let me leave a video tutorial of the Boss CS-3. Properly managing the tone knob is crucial.

The pedal has the classic Boss construction, which means sturdy and fairly compact. It comes on a blue metal chassis which is durable, easy to carry, and easy to fit on your pedalboard.

It’s also as sturdy as pedals can get, and if you like Boss’ aesthetics, it looks good as well.

As for I/O options, it has a single input and a single output. Nothing too fancy here.

There’s also a LED status indicator plus the On/Off footswitch at the bottom part of the pedal. There are no other footswitch controls, and so you can only adjust the knob with the aforementioned knobs.

That means you’d better adjust your tone beforehand. Plus, you should also memorize the settings you’re going to use for your songs so you can then tweak the pedal in a fast manner.

However, remember the Boss CS-3 is both a compression and a sustain pedal. That means a fair versatility becomes available to you for an affordable price. 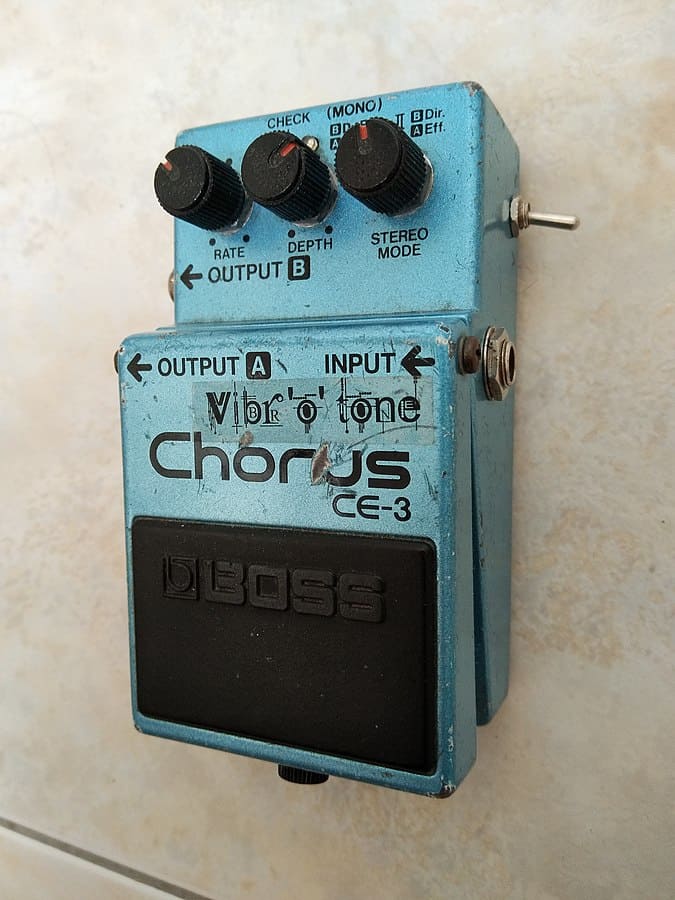 “1984 Boss CE-3 chorus with MSM Workshop mod” by Skimel / CC BY-SA 4.0 Boss pedals are typically blue or yellow. All of them come with the same chassis design and measures.

By now, you should already have an idea of the Boss CS-3 performance, as well as the importance of a compressor pedal.

In essence, the CS-3 cuts down your loud frequencies while boosting the lows at the same time. As a result, the pedal can return a rounder sound.

Moreover, it has enough versatility to come from a clean, an almost acoustic boost to an all-out distortion. By boosting the attack and the level knobs, you can obtain a clipping sound that’s somewhere in-between fuzz and overdrive effects.

The sustain knob is also impressive. It can extend the length of your notes quite significantly, which might be a handy feature for your solo and instrumental sections.

There’s one issue with the pedal, though, which is the reason the Boss CS-3 is not a full-on boutique model. The Boss CS-3 can introduce minor hiss and buzz sounds, so you may want to experiment by placing it at the bottom of the signal chain; otherwise, the hiss might grow with your other effects.

I recommend testing the pedal first, without any other pedal, and working on your clean channel. If you’ve got noiseless single-coils or humbuckers, it might work flawlessly.

With all said and done, the Boss CS-3 is a top value pedal. It has a minor problem, but It might not even be an issue on your particular guitar gig. YOu could test it beforehand to be sure, otherwise, a noise gate pedal will cancel out the problem

That said, the Boss CS-3 packs a lot of bang for its price. It’s both a compressor and a sustain. And it can shine on both its functions.

It does fall into the medium-quality range of pedals, as pricier compressors bring tons of options like vast EQ sections and knobs to precisely specify where you want your compression effect to act.

The Boss CS-3 is one of the best compression pedals for guitars you can buy right now. It will improve your tone and make your guitar playing ready for the studio.

If you’re looking for compressor pedals for bass guitars instead, check our top selection. For everything else, please stick around and leave your comments below. 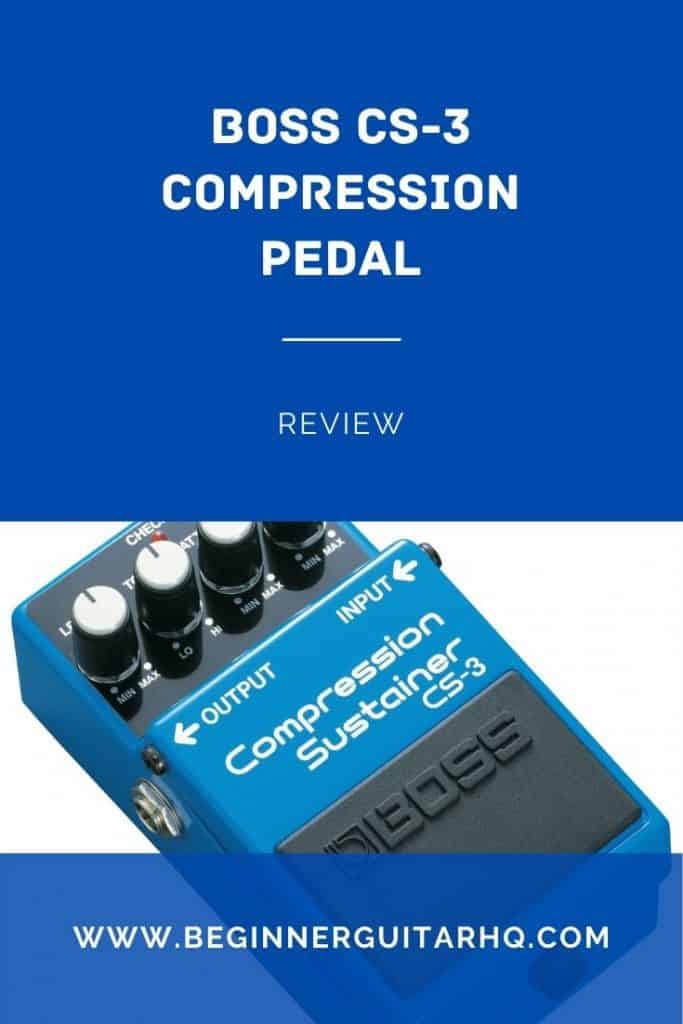