In this post, I’ll be discussing the Dreadnought specifically – what it is and where it came from, the areas it excels in and any drawbacks to be aware of, how it holds up against other guitar body types and the main differences between them, as well as listing some famous uses of the dreadnought in music, and finally I’ll highlight some of the best examples of a beginner dreadnought guitar. 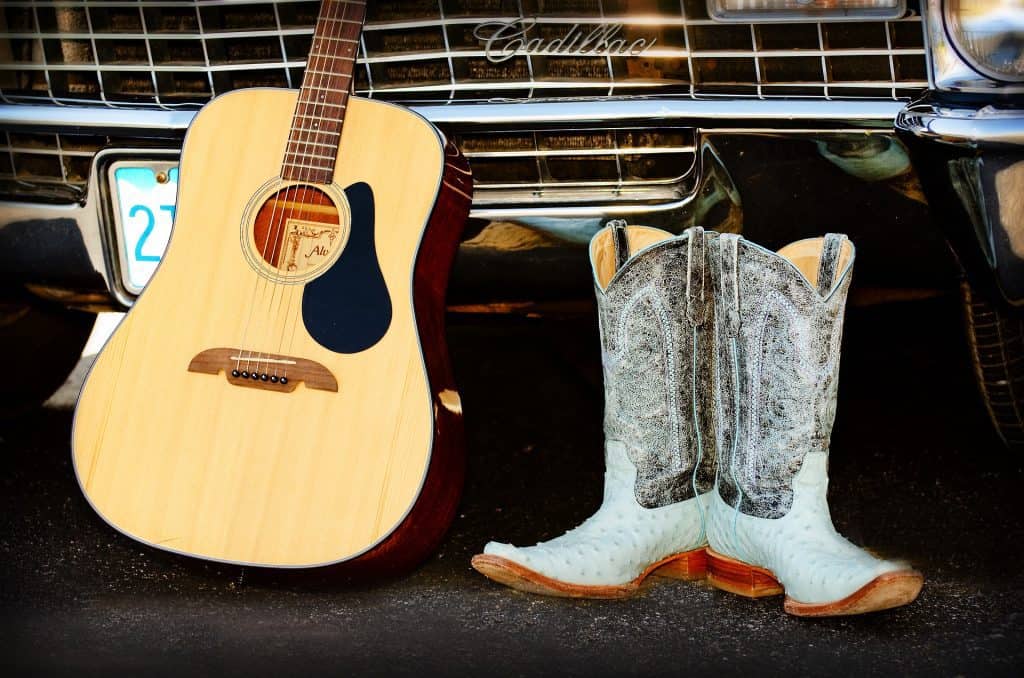 Background of the Dreadnought Guitar

The first dreadnought guitar was produced by CF Martin (usually referred to as just Martin) in the early 1900s. The term ‘dreadnought’ actually comes from the name of a type of battleship initially used by the United Kingdom’s Royal Navy. If you’re looking to buy an acoustic guitar, Martin is a brand that you should have heard of; they’re a huge name in the acoustic and semi-acoustic guitar world. These first dreadnoughts didn’t bear a massive resemblance to the dreadnoughts that Martin and other companies are producing today. The first dreadnought that looked like our modern idea of one was produced by Martin in 1931, and was called the D-2. They were made out of rosewood, a lightweight, light-coloured wood that resonates with a bright tone – as opposed to the mahogany that previous dreadnoughts were made from.

Nowadays, all kinds of companies make their own guitars with the classic dreadnought guitar body shape. Notably the Gibson Songbird, famous for the “burst” type finish that they also use on their Les Paul models, as well as a decorative and intricate pickguard, however Fender (and Epiphone), Yamaha and Sigma – as well as many others – produce dreadnought models at every price point. Let’s move on from the history of the body type, and get into what makes the dreadnought great!

Strengths of the Dreadnought Guitar

Dreadnoughts are simple. They sound great from the get-go, with a huge sound and a thick, deep tone. Because of their size, they’re able to kick out a lot of volume, as well as affording a lot of space to the bass and the mid-range tones that usually come with strumming. This makes them great for rhythmic and percussive playing. They’re especially great when performing acoustic sets with a band, because they can play the role of the bass to a certain degree as well as holding down the rhythm section.

Like most acoustic body types, the neck of the dreadnought body shape cuts off earlier than a typical electric guitar. However, they tend to cut off at the 14th fret – which is higher up the neck than other acoustic or semi-acoustic guitar body types. This means you can get higher up and perform more interesting chords (like triads or jazz chords), as well as giving you the ability to play higher solos for acoustic songs. The dreadnought guitar performs well when playing those high notes as well as the lower notes, giving them a great sustain and resonance as well as highlighting the weight underneath those notes – rather than leaving you without any bass or mid-range when you’re noodling around past the twelfth fret or playing guitar harmonics. There is also the option to grab a dreadnought guitar with a cutaway, giving you even more access to the higher reaches of the neck.

Another advantage of the dreadnought guitar is that, due to how popular it is, there’s so many options out there for picking up a guitar that suits you, at your budget. You can even go down the rabbit hole of getting a dreadnought custom-built for yourself by a manufacturer. 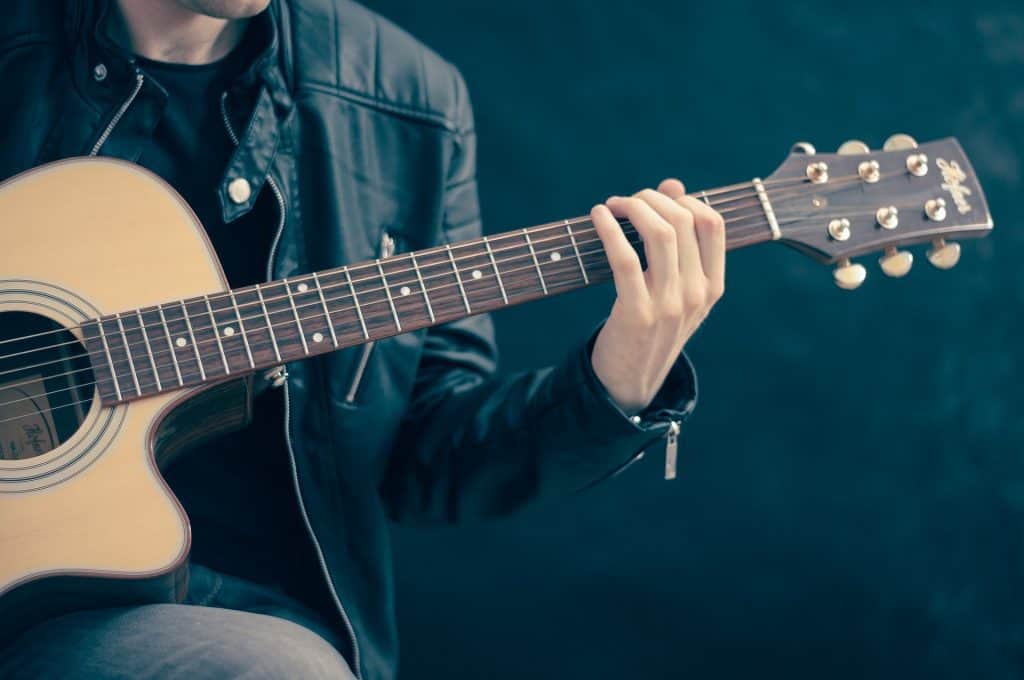 A dreadnought with a single cutaway

Downsides of the Dreadnought Guitar

For all the great aspects of the dreadnought guitar, you can definitely find some drawbacks. We’ll start with the big one (no pun intended) – the size. Dreadnoughts are among the bigger guitar body types, which – while adding to the volume and the tone – isn’t going to work for everybody. They’re quite deep and quite wide guitars, so I’d recommend that you try before you buy if possible, and play one in-store to see if it’s comfortable for you.

The volume of the dreadnought guitar can also be less than ideal for particular situations, too. If you’re playing in a very echo-y room, or you need to play quieter to perform “underneath” a band, you might find that the guitar is just making too much noise. If you’re practicing guitar at home and you want to keep it quiet and avoid disturbing family members or housemates, you’ll struggle if you’re working with a dreadnought.

The bassy tone of the dreadnought guitar body shape can also present a problem when performing with other musicians, particularly bassists. If you’re playing an acoustic set, and there’s a bassist performing with you, you might find that the bass and the lower notes of the dreadnought can become a little bit muddy, as they’re both loud, dominant voices in the lower registers.

Another potential downside of the dreadnought for beginners is the types of guitar strings you’ll need to use. Realistically, you will need to use steel strings. This only presents an issue if you’re just starting out with guitar, because over time the fingertips on your fretting hand will develop calluses that will help protect your fingers from the strings cutting into them, but steel strings are harder on your fingers than nylon strings are. If you’re just starting out with the guitar, it might be painful to begin with steel string guitars.

The Dreadnought Guitar vs Other Guitar Body Types

When deciding what type of guitar you want to buy, it’s helpful to know not only the upsides and downsides of any given guitar body shape, but also how they stack up against each other in a direct comparison. Here’s a few comparisons of the dreadnought guitar body type, and other popular guitar body types:

The dreadnought vs. the jumbo guitar

While we’re discussing large acoustic guitars, it’d be remiss to leave out the biggest popular body type: the Jumbo. You’ll have seen these in and around the Nashville music scene, but also in the hands of rockstars like Noel Gallagher (of Oasis fame), among others. These guitars are the quintessential loud, brash rhythm guitars – requiring a heavier hand, but rewarding you with much more volume.

The dreadnought vs. the concert guitar

The concert guitar is a smaller alternative to the dreadnought. This means it’s a little easier to play for younger players or smaller people. However, due to its smaller size, the concert guitar loses some of the range of the dreadnought – notably the overtones and harmonic effects you’d get from the more resonant body of a dreadnought. It also provides a less prominent bass voice, which might be helpful to avoid any muddiness when performing with others, but you will suffer a drop in volume – making it difficult to play a concert guitar as part of a band.

The dreadnought vs. the parlor guitar

The parlor guitar is a much, much smaller example of a guitar body. They’re best suited for solo playing, as their smaller size limits how much volume they can put out, but their size also means they’re more portable and more easily playable than other body types like the dreadnought or the jumbo. Typically, the neck of the parlor guitar cuts off at the twelfth fret; two frets above the dreadnought.

The dreadnought vs. the classical guitar 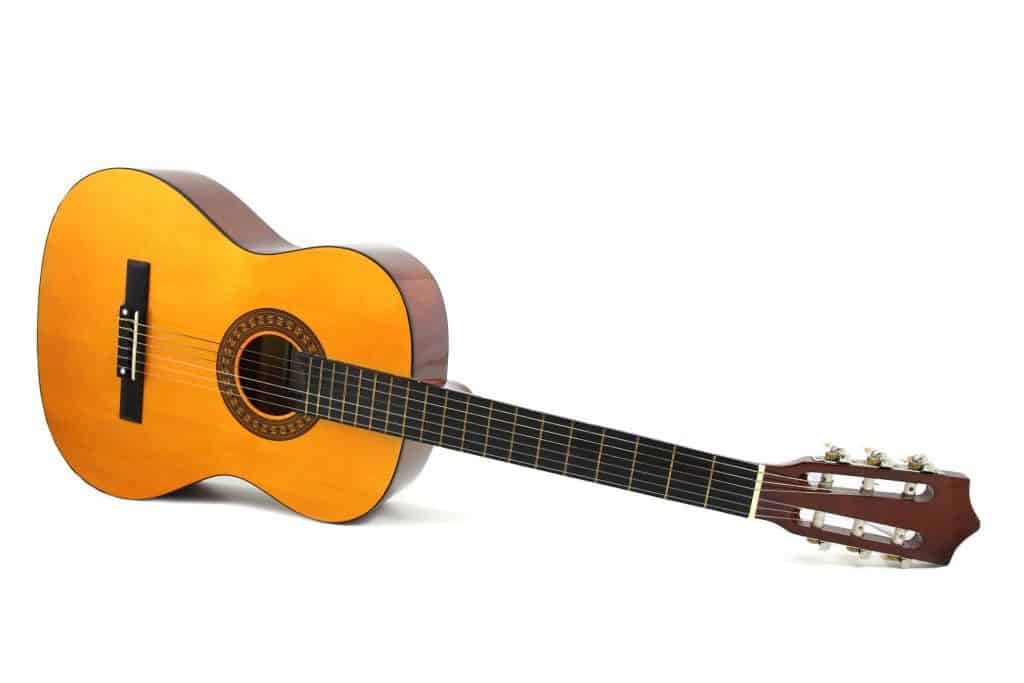 The dreadnought guitar is one of the most widely used and most iconic guitars in rock n’ roll, blues, jazz and music history in general. You’ll have seen the Martin D-28 in the hands of Ben Howard most recently, but it’s also been used by legendary musicians Jimmy Page (of Led Zeppelin) and of course Elvis Presley.

The dreadnought has also been a favourite of country music artists – Johnny Cash even has a signature dreadnought model, the Martin DX.

Currently, you can find dreadnoughts being played by Father John Misty, Rivers Cuomo of Weezer (he favours cutaway models), and the Avett Brothers’ Seth Avett, who worked alongside Martin to produce a custom model (the Martin D-35 Seth Avett).

So if you choose to go with a dreadnought guitar for your next purchase, rest assured – you’re in good company.

If you’re just starting out with guitar, or are looking to purchase an entry-level acoustic for yourself or a beginner guitarist, here’s a shortlist of some of the best budget dreadnoughts available on the market. 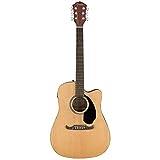 It’s hard to go wrong with a Fender, and this is one of the better budget options as far as acoustic guitars go. As an electro-acoustic, this guitar gives you the ability to plug into an amp and shape the sound and tone, as well as applying effects. The laminated wood top isn’t the best choice, but in this price range it’s not unexpected. It’s a solid beginner guitar, and offers great playability and a classic look for the price.

This guitar looks great. The mahogany top gives it a unique look among the lighter-coloured woods like rosewood that are typically used for Dreadnoughts, and offers up a deeper, richer and lower tone than alternatives at the same price point. 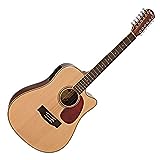 For something a little more adventurous, you could go with the 12-string dreadnought from Gear4Music. They might not be a name brand, but the guys at Gear4Music always offer relatively decent quality for a low price. You’d be hard-pressed to find a twelve string (or even a decent six string) for the price this is sold at – and it features a solid top, as opposed to a laminated one. Probably not something you’d want to get for your first guitar, but if you’re looking to pick up and learn how to play a twelve string guitar out of curiosity without wanting to invest too much money – this is a good choice. 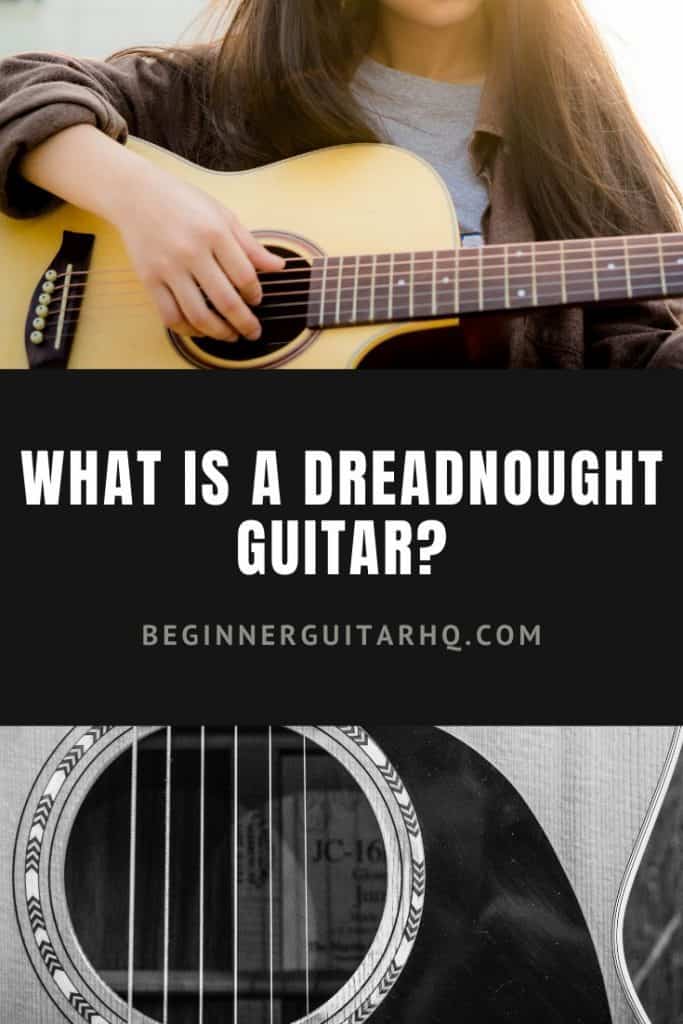